Bespoke pieces and £1,400 designer dresses – how much did Meghan’s wardrobe REALLY cost this week?

Since becoming an official royal in May last year, the nation has been transfixed on Meghan’s wardrobe – and this week was no different.

The Duchess of Sussex, 37, attended three public engagements and dazzled with her choice of outfits, iridescent jewellery and designer clutch bags.

The mother-to-be, who is around six months pregnant, ditched high street for high-end as she visited the National Theatre on Wednesday, the Association of Commonwealth Universities on Thursday and visited charity workers with husband Prince Harry in Bristol on Friday.

The Duchess of Sussex swapped high-street for high-end as she visited the National Theatre on Wednesday, the Association of Commonwealth Universities on Thursday and made several royal visits with Prince Harry in Bristol on Friday

During one royal engagement Meghan stayed loyal to Givenchy, the same label who designed her wedding dress, and opted for two bespoke outfits from her go-to label, while the following day her pricey dress cost a whopping £1,404 alone – so how much did her outfits cost in total?

The Duchess of Sussex looked pretty in peach when she met staff at the National Theatre on London’s South Bank.

It marked her first official visit since succeeding the Queen as its royal patron – and the royal was definitely dressed for the occasion in head-to-toe designer. 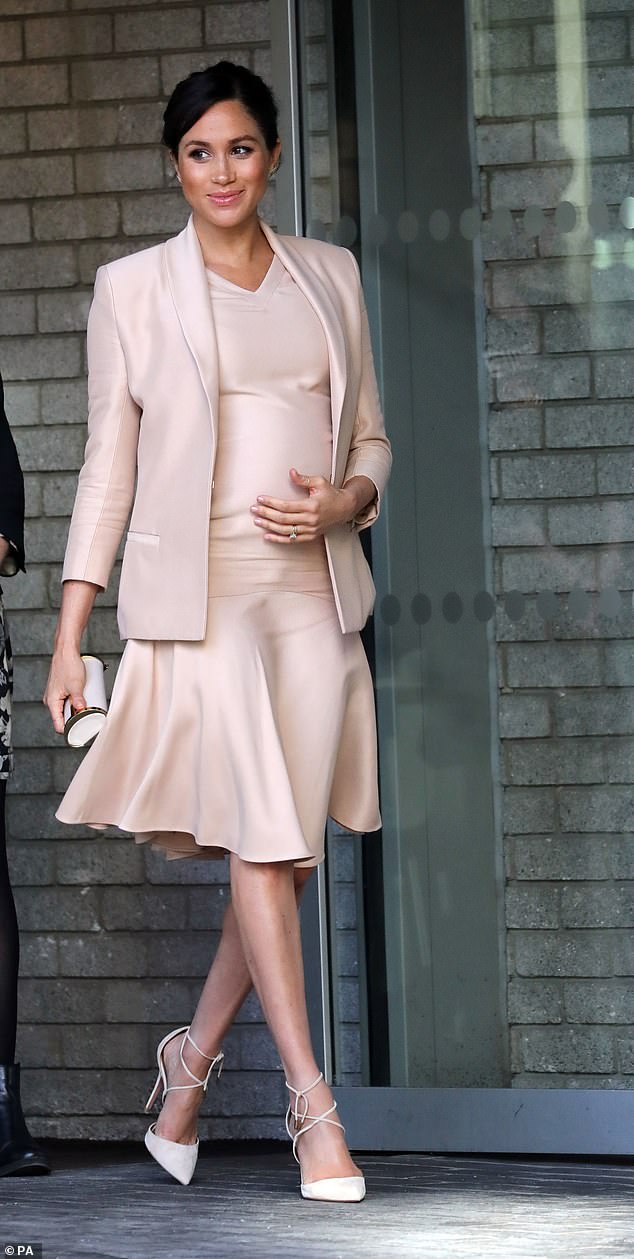 On Wednesday we wear…a Brandon Maxwell mini dress costing £1,728 and a matching £2,004 blazer. Meghan wore this stylish outfit along with Aquazzura heels which are priced at £440 and a £805 Carolina Herrera clutch as she made her way to the National Theatre in London

Meghan styled her bump with a blush pink outfit, teaming a £1,728 mini dress with a matching £2,004 collar blazer by Brandon Maxwell from the Spring/Summer ’19 collection – the American label which designed the khaki shirt dress she wore whilst on tour in Australia.

The Duchess opted for the same chic cream £440 Aquazurra lace-up heels she showcased at her first official photo call with Prince Harry after announcing their engagement in 2017.

Clutching her bump with her left hand, she then completed the look with a £805 Carolina Herrera clutch in her right – bringing Wednesday’s outfit total to a cool £5,000.

The pregnant Duchess remained true to one of her favourite brands when she opted for double Givenchy as she made her first official visit with the ACU in her new role as Patron of the international organisation.

Looking chic in black, she was photographed wearing the same bespoke Givenchy collarless coat which she fashioned on Remembrance Sunday in November 2017.

On Thursday, Meghan proved her loyalty to Givenchy, wearing a bespoke coat from the iconic brand over a pleated black silk dress, also a bespoke piece. She accessorised with Dean Davidson ‘Midi Knockout’ stud earrings which cost £145, a Three Stone opaf puff at £617 and Malono Blahnik BB pumps in beige suede at £625. Above, Meghan making her way to the Association of Commonwealth Universities

The mother-to-be paired the costly jacket with a black pleated dress with a high-low hemline, which again was from her pricey go-to-label.

She teamed the pleated handkerchief skirt with her signature nude suede heels by designer Manolo Blahnik, which are available to buy for £625, and added extra sparkle with £145 Dean Davidson earrings and a gold Thee Stone cuff bracelet, which is £617, by Wwake.

While the dress and jacket combination are custom-made and not available to buy, an expert stylist revealed that the cape-style coat would retail at around £2120, while the bespoke dress would set you back a minimum of £2000.

If our calculations are anything to go by, Meghan’s Thursday outfit makes it themost expensive ensemble during her week of busy engagements, totaling over £5, 500.

The Duchess wrapped up in a chic black coat layered over a printed dress by Oscar de la Renta as she braved the snowy weather conditions for a trip to Bristol.

Featuring floral and fauna motfis themed around an enchanted forest, the silk chiffon midi dress, which was originally on sale for £2,335, is now in the sale for £1,401 – almost half the retail price.

Meghan paired the floaty dress with knee-high boots by high-end designer Sarah Flint and while they undeniably gave Meghan’s outfit a chic finish, that came at a cost – £531 to be precise. 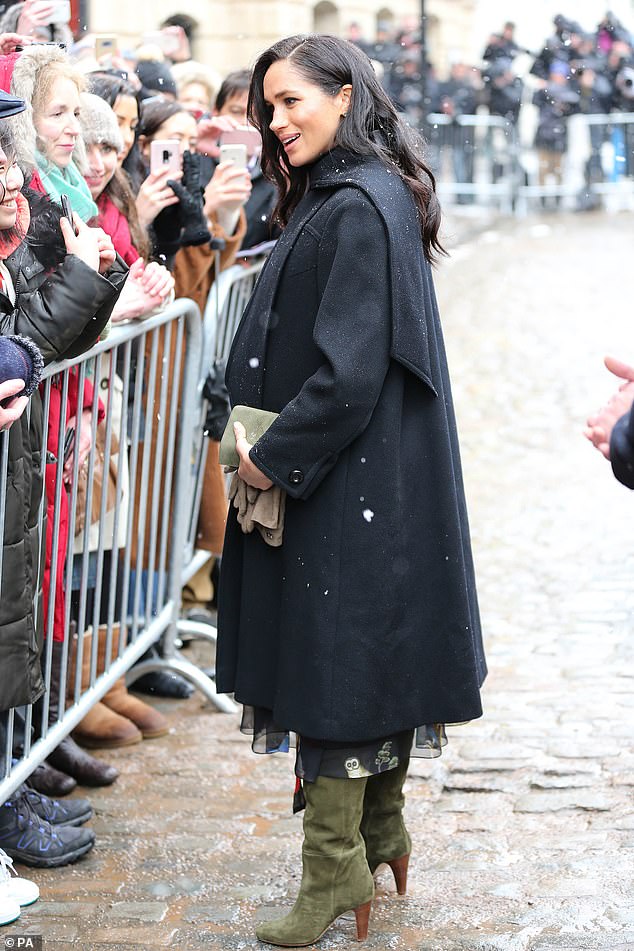 Snow queen. On Thursday, during a visit to the Bristol Old Vic, Meghan wore a bespoke William Vintage coat over an Oscar de la Renta dress costing £1,401. She paired the outfit  Sarah Flint ‘Marina’ boots which cost £531 and accessorised with Pippa Small Herkimer diamond earrings, which will set you back £495. Pictured above greeting onlookers in Bristol

While the William Vintage coat and Ralph Lauren clutch are both custom-made, a style expert has looked at similar designs and revealed the jacket is thought to be around £675, while the stylish bag would cost a staggering £600.

Meanwhile, there’s no estimates when it comes to the price of the Pippa Small Herkimer Diamond Studs, as they are available to buy for £495, meaning Meghan’s Friday outfit totals over £3, 700.