Best performing funds and investment trusts since the start of 2021

Funds investing in the UK were some of the top performers in the first quarter of this year as Britain’s fast roll-out of vaccines has tempted some investors to bet on the country’s recovery.

The Investment Association’s UK Smaller Companies sector came top of the table, with returns of 9 per cent in the first three months of the year, while UK Equity Income funds were in third position, up 6.8 per cent, and UK All Companies up 5.8 per cent.

North American smaller companies are also benefiting more than large caps from the expected economic recovery, with the average fund in that sector growing 6.9 per cent.

UK rebound: Funds investing in the UK were some of the top performers in the first quarter

Even UK shopping centres posted a decent quarter of performance, such as Bullring owner Hammerson, which was up 40 per cent, as well as Drum REIT – a real estate investment trust investing in regional commercial property assets – up more than 73 per cent.

However, these are still significantly down on their pre-pandemic levels – and many retail investors are still fleeing the UK stock market, with £1.7billion withdrawn from UK equity funds in January and February, according to Investment Association data.

Laith Khalaf, a financial analyst at AJ Bell, which compiled the research, said: ‘The first quarter of the year saw a resurgence of some areas of the market which have been badly beaten up by the pandemic, as investors look forward to life beyond Covid.

‘Funds investing in the US continued to do well, with the S&P 500 now having broken through the 4,000 mark for the first time.

‘UK equity funds also enjoyed a rare glimpse of the top of the performance tables, thanks in part to the cyclical make-up of the UK stock market, and the reassessment of the prospects for these economically sensitive stocks that has taken place since the arrival of effective vaccines.’

Funds investing in commodities were some of the best performers, such as Schroder ISF Global Energy, which saw returns of 25 per cent in the first quarter, and Guinness Global Energy, of 20.5 per cent.

Top performing investment trusts… but should you consider them for your ISA portfolio?

Some investment trusts have seen whopping returns of over 150 per cent.

All Active Asset Capital Limited, an investment trust which focuses on tech companies, saw returns of almost 185 per cent in the first quarter, while Agronomics, which invests in companies providing meat alternatives, was up almost 136 per cent.

However, some of these top performing investment trusts may not be suitable for the average investor’s Isa.

Some have a very small market cap (less than £10m or in some cases below £5m) ) for an investment fund, and can therefore be subject to volatility – particularly in the gap between the share price and the net asset value.

‘A lot of these trusts are fairly niche investments and so wouldn’t form the core of a typical ISA portfolio’, said Khalaf.

‘However, experienced investors who are already well-diversified across major markets and sectors and who want to gain additional exposure to specific themes might consider some of these trusts for their ISA, though they must be willing to accept the risks that come with investing in these more specialised areas.’

Drum Income Plus Reit, a real estate investment trust investing in regional commercial property assets, saw returns of 73.6 per cent, while Tirupati Graphite, which focuses on the growing graphite market and has mining operations in Madagascar, delivered 44 per cent returns.

Tiger Royalties and Investments, which invests in natural resource companies globally, provided returns of 42.9 per cent for investors

At the other end of the performance table, fixed income funds had a dismal quarter, as markets priced down bonds in anticipation of heating economies and the probability of rising inflation.

Khalaf says: ‘Of particular concern to UK investors is the big drop in gilt funds, as these are prized by investors seeking a safe haven for their money, and a 7.4% fall in three months doesn’t precisely fit that billing.

‘If risk appetite continues to increase with the global vaccine roll out, and markets start looking forward to potential interest rate rises, recent falls could be the thin end of the wedge for UK government bonds.

‘These assets do still provide some diversification, and they will hold up well if the pandemic or the economy takes a turn for the worse. But based on the high prices and low yields currently on offer in the market, the long term prospects for gilt funds don’t look good.’

As we have now entered the new tax year, Mike Paul, head of fund research at wealth manager Brewin Dolphin, has picked five funds to consider putting into your ISA.

They include Scottish Mortgage – the flagship global investment trust managed by Baillie Gifford – which he says is ‘an excellent long-term holding for any ISA’.

He also recommends Fundsmith Equity, which invests in large and liquid multinational companies such as Microsoft and Nestlé.

‘Maybe not the most original suggestion given its widespread popularity, but Terry Smith’s concentrated portfolio of high-quality global equities should be a go-to option for any ISA investor’, Paul says.

Other of Paul’s picks are Comgest Growth World Fund, which he recommends for ‘long term investment into high quality companies around the globe’, BlackRock Throgmorton – a UK smaller companies investment trust, and Brown Advisory US Sustainable Growth Fund.

Nick Wood, head of fund research at Quilter Cheviot, has picked three investment trusts for investors to consider as a core part of their ISA portfolio.

He recommends JP Morgan American, which outperformed the FTSE North America index by 5 per cent in 2020, and this year it is around 1 per cent ahead after the first two months

His other two picks are RIT Capital Partners and Pantheon. The first, run by J Rothschild Capital Management, ‘is diversified across quoted and private equity, hedge funds and absolute return and credit investments’, while the second ‘represents a highly diversified private equity fund of funds option’.

Bestselling funds and investment trusts of 2021

Interactive Investor has compiled a handy list of the most popular funds and investment trust on its platform in March this year.

All four of the passive funds on last month’s top 10 fund bestsellers list are from Vanguard.

But, active funds continued to prove popular among Interactive Investor customers in March, with Baillie Gifford once again dominating, accounting for half of the top 10.

Fundsmith Equity returned to the number one spot, knocking Baillie Gifford American off its perch. The fund fell to third place. 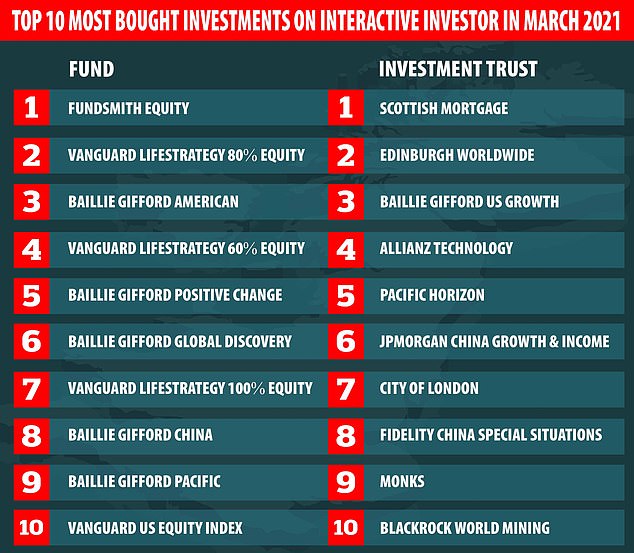 Polar Capital Technology lost its place in the top 10 following City of London’s re-entry. The rest of the nine members of the top 10 kept their places in March, with Scottish Mortgage rooted at the top of the table.

Four other Baillie Gifford-managed trusts are in the top 10: Edinburgh Worldwide and Baillie Gifford US Growth occupy second and third place, while Pacific Horizon is in fifth position. Further down the table in ninth place is Monks.

Teodor Dilov, a fund analyst at Interactive Investor, said: ‘The Vanguard LifeStrategy range has remained a favourite among our customers, despite the dominance of active funds on the top 10 fund bestsellers over the past year. These funds have developed a strong reputation, underpinned by a solid performance track record – even during the coronavirus crisis.

‘As such, the popularity of Vanguard’s LifeStrategy funds last month can most likely be explained by last minute investors seeking to make the most of the ISA allowance before the start of a new tax year on 6 April 2021.’

He added: ‘The Vanguard US Equity Index had not been seen in the top 10 most-bought funds’ list for about a year. It’s inclusion coincides with US president Joe Biden’s $3trillion Covid recovery package, which, if implemented, could turbocharge the US market, following fears of rising interest rates and inflation which have dragged down the performance of the US market this year.

‘The resurgence of City of London adds to a growing body of evidence that investor sentiment to the UK has started to pick up following a tumultuous period for the region owing to Brexit uncertainty and the pandemic.

‘The Investment Association also reports that UK funds ended an eight-month streak of outflows in February. With the UK on the cusp of exiting lockdown, it will be interesting to see if the seemingly renewed appetite remains.’