‘It’s pretty tough when you have both David Bowie and Prince championing you, but the music business still can’t really be bothered,’ says Beverley Knight with a shrug as she recalls the early days of her career.

Back then, in the hedonistic days of Nineties Brit Pop, she was known in some quarters as ‘Boring Beverley’, constantly being told to lose weight, sex up or snort a line of cocaine so she would at least fit the idea of what a pop star should be. The fact that an overwhelmed Bowie turned up in her ‘very dodgy dressing room’ at her first show at the Jazz Café in 1998 and stayed a lifelong friend, or that Prince responded to her record company dumping her in 2008 by inviting her to go on tour with him, made zero difference.

Beverley Knight is celebrating 25 years in the business, with hits from Shoulda Woulda Coulda, Greatest Day and Come As You Are to Soul Survivor

‘I just didn’t fit in to the image,’ she says. ‘I wanted to be Aretha Franklin – I wasn’t about being cute, sexy or hot. There was also an expectation that because I was a working-class black girl from Wolverhampton I was going to be tough, aggressive, mouthy and from a broken home. My parents were all about education. I had a degree [in theology] and a stable, religious upbringing, and in meetings I was calm, eloquent and never rose to the bait.

‘I was offered drugs so many times,’ she says with a laugh. My thing was just to smile and say I was fine. I knew it set me apart, made me a bit of a social outcast. I don’t think anyone thought I was going to last two seconds. Except me. I knew I was bloody good and I knew I was going to prove it.’

She was right. This year, Knight is celebrating 25 years in the business, with hits from Shoulda Woulda Coulda, Greatest Day and Come As You Are to Soul Survivor. Later this year she will release her ninth album, a live recording of a recent sell-out show at the Royal Festival Hall with full symphony orchestra, featuring all the hits and some new songs. In October she will tour the UK celebrating the Stevie Wonder songbook.

She has also, in the past ten years, stormed her way through the West End in award-winning shows from The Bodyguard to Memphis, scooping an Olivier nomination for the latter, and winning critical acclaim for her performance as suffragette Emmeline Pankhurst in Sylvia. Next month she and Billy Ocean headline Kew The Music and in the industry Knight is revered by young and old. The late Terry Wogan regularly said she was his all-time favourite singer. Mid-way through our conversation, Mel B texts her to invite her to come and see her backstage at a Spice Girls show. In 2006, the Queen made her an MBE. 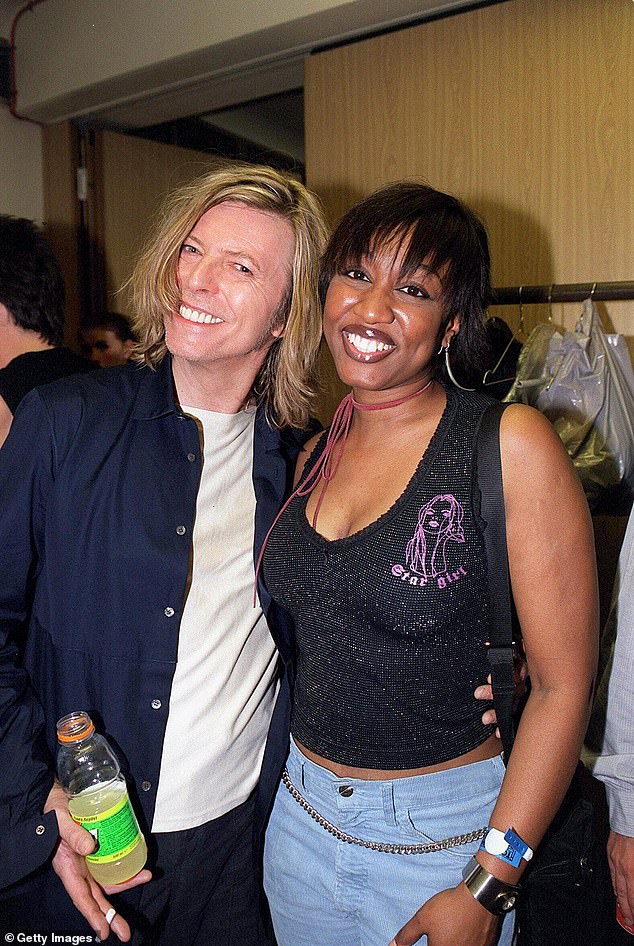 Knight with David Bowie in 2000. ‘He always called me “Little Aretha”, which was possibly the biggest compliment anyone could have given me, let alone David Bowie’

Knight was born a fighter. The middle child of Deloris, a nurse, and Edward, a builder, she knew at the age of six, singing in the choir at her Pentecostal church, she was destined to be a singer. Growing up in Seventies Wolverhampton – less than ten miles from the National Front headquarters in Walsall – she experienced racism first-hand. At school she was taken out of a top maths group because of the verbal bullying. ‘And I was the one who was removed!’ she says. ‘But it’s a lesson because you learn to deal with it. It made me tougher. It made me realise things were always going to be harder for me, but strangely enough it actually made my belief in myself stronger.’

Does she think racism in the industry was the reason she was never given a break? She pauses. Knight is not one to rush into making controversial statements. Last week she said she was considered by the music industry as ‘maybe too dark. It was easier to market someone who was much lighter, with more “European” features.’

She smiles: ‘Yes, there is racism in the music industry. There is racism in most industries. The fact that you are stereotyped from the moment you walk into a room, that is a problem. The fact that being cast as Emmeline Pankhurst in Sylvia provoked people writing to the Old Vic to complain [her response to a critic who said she didn’t have the right skin colour was: “You mean like the hundreds of years of white actors playing Othello, Cleopatra, any number of Asian characters… like that?”], the fact that even though Tommy Robinson [the far right extremist] wasn’t elected as an MEP, 20,000 people in Manchester of all places thought it was OK to put a cross by his name. The move towards the far right which is happening right now is quite frankly terrifying.’

She stops again. ‘My policy has always been to lead by example. There is no point getting angry. As a performer I knew that as a black woman I had to work harder and be better to get anywhere and I had to believe in myself, rely on myself, follow my instincts. When I was criticised for the way I performed on tour, I funded my own tours so I could do things my way. I would go without rather than have someone tell me I was too Earth, Wind And Fire – I mean, is that supposed to be an insult?’ She laughs. ‘I was actually told that by one record company and I told them that was actually a compliment. 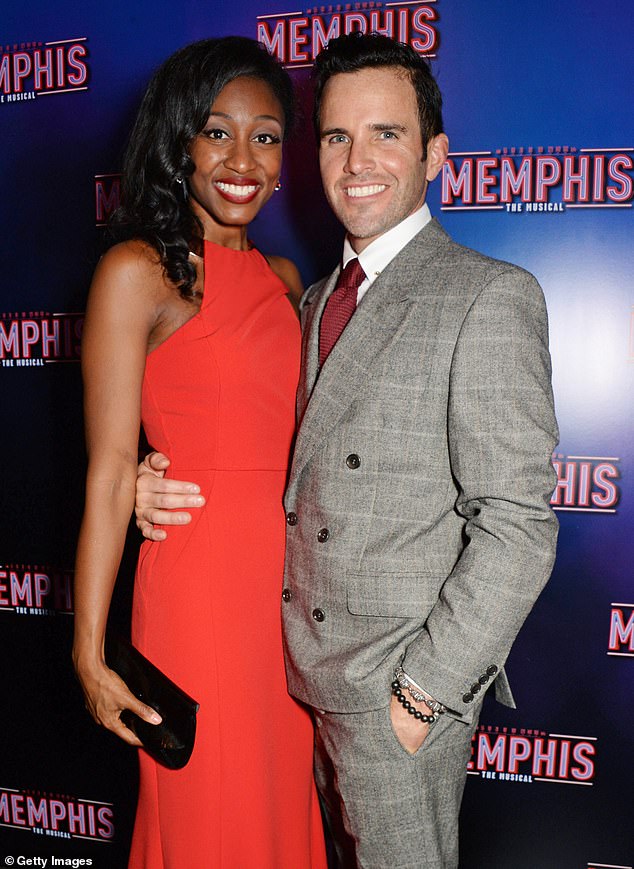 ‘I always believed I would have my moment. When it got tough in the music industry I took the chance on playing the lead in The Bodyguard and it paid off. I ended up with two careers and each one feeds the other. And, 25 years on, I know I have turned the tide. I know I have respect, I know I have proved so many people wrong and I’m very happy to be where I am. But I haven’t stopped yet.’

In life and work, Knight is uncompromising. She is a strict pescatarian, eats no dairy, no refined sugars and drinks no alcohol. She has never accepted a line of cocaine or taken a puff of cannabis. She trains like an athlete every day and has an encyclopaedic knowledge of nutritional issues, vitamins and supplements. Her body, at 46, is a tiny but powerful size eight. ‘My career is based on my voice. The way I live is to look after myself, to be able to perform every time to the best of my abilities.’

This attitude did, however, almost kill her. In 2016 she collapsed during a Children In Need performance with dangerously low blood pressure. When she came to, a paramedic was holding a Mars bar in front of her. ‘My first words were: “I don’t eat dairy or refined sugars”, then everyone just screamed at me to eat it. Then I got back on stage.’ Three months later, in 2017, she flew to Canada to take the lead in a production of The Bodyguard and she was rushed to hospital because of crippling pains in her stomach. She was told she needed immediate surgery because fibroids in her uterus had blocked the ureter tubes to her kidneys, causing her blood pressure to rocket to stroke levels. She asked if she could have medication to deal with the pain so she could fulfil her contract on the show. ‘The doctor looked at me and told me if I took that option then he would be performing my autopsy in a matter of days. He told me I could die if I didn’t have surgery.’ It was only then she stopped.

Below her stomach a curved scar, which she calls her ‘second smile’, runs from hip bone to hip bone. The operation also necessitated a hysterectomy. She recovered for several months at home in Wolverhampton with her mother and older sister, Cynthia. After the hysterectomy, she was hit by the fact that she would never have children. Although she has been happily married to nutritionist James O’Keefe for seven years, she chose her music over motherhood. ‘For me, music was a vocation and I knew if I had children I would want to be the best mum I could be, which would mean that my life wasn’t focused around music; it would be focused around my children. I’d felt happy with that decision until the choice was taken away from me. But now I feel at peace with it. It wasn’t meant to be. I’ve completely accepted it.’

Although the music industry has now accepted Knight as our own Aretha Franklin, it was Bowie who first told her she would be a major star. ‘The first time I met him, he came to my show with his wife, Iman. They sat up on the balcony and Iman was going crazy dancing all night. People in the audience couldn’t believe Bowie had turned up to this little gig by this fairly unknown singer.

‘And then he came backstage. My dressing room was pretty much a toilet, but he was so relaxed. He told me that one day I was going to be huge. After that we would meet up at concerts. He always called me “Little Aretha”, which was possibly the biggest compliment anyone could have given me, let alone David Bowie. The last time I saw him was at one of his concerts and we had a long chat about black hair and hair weaves. He knew so much about it and was asking me who did the best weaves in London. He was this amazing artist, but so totally down to earth.’

And Prince: ‘Prince had a great sense of humour. He liked to laugh, but he was completely obsessed with music. As obsessed as I am. That’s why we bonded. We knew all the tiny details, all the names of the old soul stars’ trumpet players, the microphones they used, the recording studios – total music nuts.’

Twenty-five years in, Knight says her ambition is undimmed. ‘I spent so many years of my life proving myself. And then something happens – I almost died – and it shocks you and then you look at your life and your career again.

‘But almost dying made me stronger. It made me realise I got a second chance, and with that second chance I do want more. I’m happy with how far I’ve come, but I’m not standing still. I want a bigger career, a global career.’

Knight tours the UK from October 1. Her live album ‘BK25’ is out in November and she co-headlines Kew The Music on July 9, kewthemusic.org