Journeys on the UK’s most popular roads could take more than three times longer than usual as the summer holidays end and children return to school, new figures show.

Traffic information supplier Inrix warned that roads will generally be busiest on Monday September 4 as holidaymakers capitalise on the last few days of the break while other people resume their commutes.

Routes back from the coast, ports and holiday destinations dominate the list of most congested roads.

Warning: Journeys on some of Britain’s busiest roads could take take up to three times longer over the coming days with the M25 clockwise between J14 and J24 expected to see the most significant delays

Motorists returning from Devon and Cornwall, the Lake District and East Anglia will be particularly affected, according to Inrix.

Drivers planning a trip on the M5 northbound from Exeter to Bristol are being warned to prepare for a trip of two hours and five minutes on the route, which takes one hour and 15 minutes in free-flow traffic.

The most significant delays as a proportion of traffic-free conditions are expected on the M25 clockwise from London Heathrow to Potters Bar, Hertfordshire, where a 15-minute journey in free-flow traffic is expected to take more than three times longer – some 50 minutes – during the afternoons of Thursday and Saturday.

Journeys are expected to take two hours and 20 minutes on the M6 southbound from Lymm, Cheshire, to Cannock, Staffordshire, on Monday afternoon, which is 2.8 times longer than without traffic. 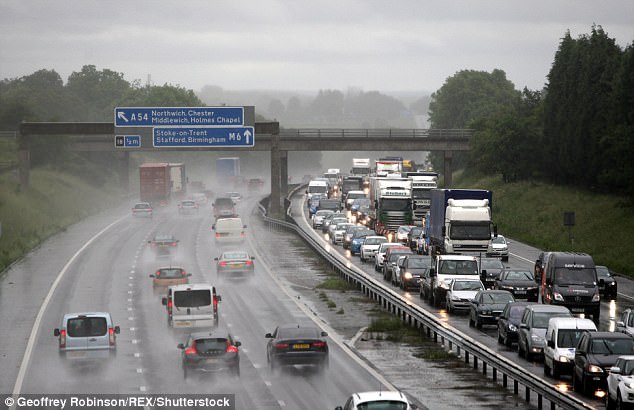 Trips on the M6 southbound from Lymm, Cheshire, to Cannock, Staffordshire, are expected to take two hours and 20 minutes on Monday afternoon, 2.8 times longer than usual

Inrix chief economist Dr Graham Cookson said: “All good things must come to an end. Sadly for most, the end of the summer holidays heralds a return to work, school and traffic.

“Holidaymakers hoping to make the most of the remaining few days should be aware that traffic will be worst on Monday afternoon and evening.”

He added that the fastest way home may not be the shortest distance, and urged drivers to consider alternative routes.