Beyonce and Jay-Z are being accused of copying Kanye and Kim’s motorbike scene from the rapper’s Bound 2 video.

The couple are currently in Jamaica reportedly filming a promotional video for their new tour, On The Run II.

On Thursday they were spotted in Kingston surrounded by film crew as they shot more scenes with Queen Bey sat behind her husband on a motorcycle with bull horns on the front.

They make a good team: Beyonce and husband Jay Z are seen filming a video in Jamaica on Thursday 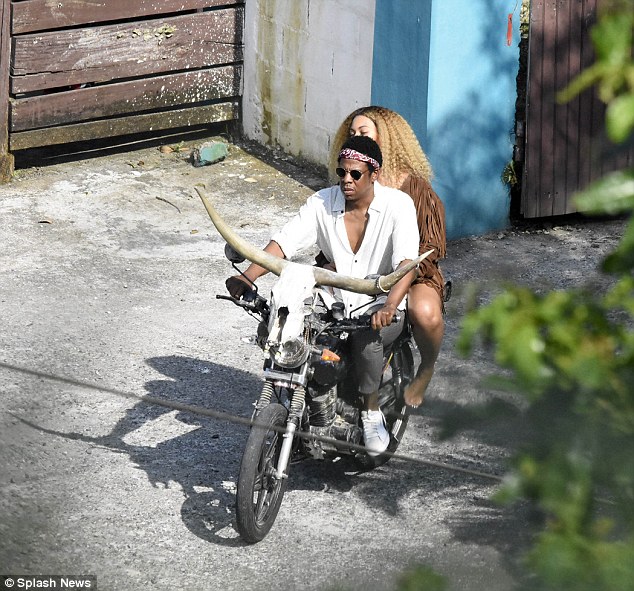 Ride or die: The 36-year-old singer sat behind her man as he took the helm

The 26-year-old Drunk In Love singer was seen in a brown fringed suede dress with her blonde locks styled in frizzy waves.

Jay, 48, could be seen wearing a white shirt open at the neck with grey slacks.

The 99 Problems hitmaker wrapped a silk scarf around his head.

It’s not clear if the couple, who are parents to daughter Blue Ivy and twins Sir and Rumi, are filming a music video or promotional material for their new tour.

It’s the second time they’ve been spotted filming on a motorbike this week.

The images bear a striking resemblance to Kanye West’s music video Bound 2 which featured his then fiancee Kim Kardashian. 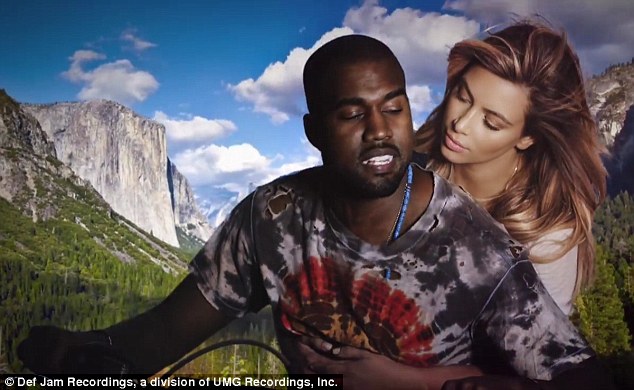 Bound 2 TWO? Bey and Jay’s shoot has been compared to Kanye West’s 2013 video for Bound 2 featuring his wife Kim Kardashian 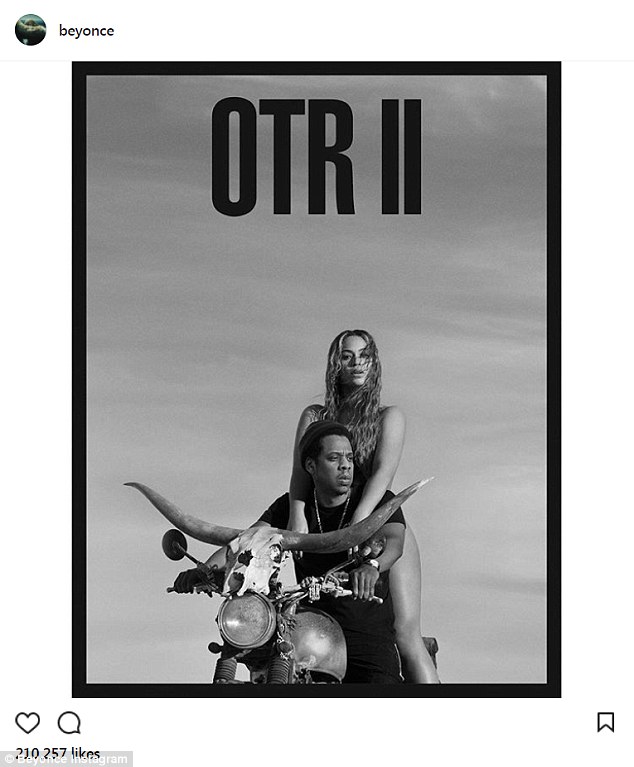 Looks familiar: The power couple announced their OTR II world tour with this image showing Beyonce naked on the bike 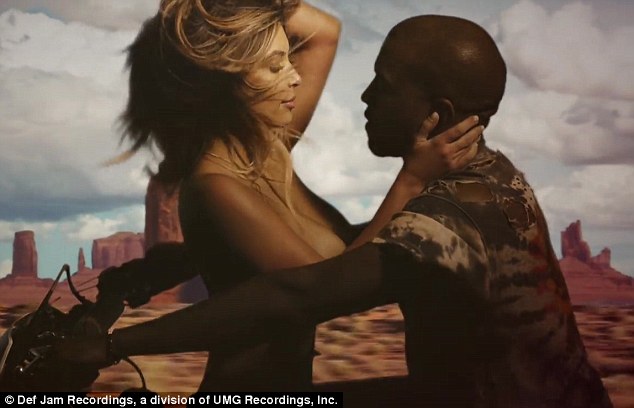 Naughty: Kim stripped off for the sexy video which saw her writhing around in front of the rapper as he rode the bike

When they first announced their tour earlier this month, Beyonce unveiled a poster of herself naked riding pillion behind her husband, with fans quick to point out the similarities between the image and Kimye’s video.

Kim writhes around nude on the front of the bike in Kanye’s 2013 music video simulating sex.

Bey and Jay’s version certainly appears to be less explicit.

The two power couples used to be close, with Jay counting Kanye as one of his rap protegees.

But in 2016 the rappers fell out when Jay stopped calling Kanye after his public rants and discussing Beyonce on stage. 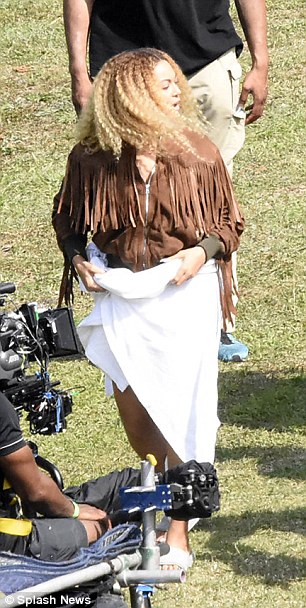 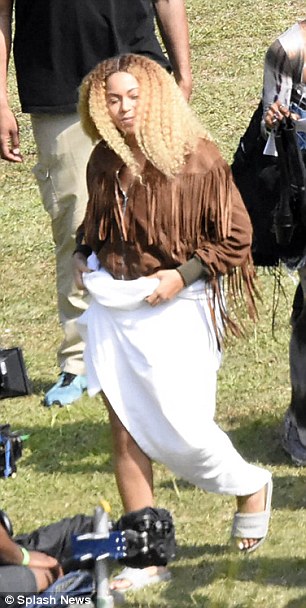 Boho beauty: The singer was seen wearing a brown fringed mini dress and wrapped a towel around her waist in-between scenes 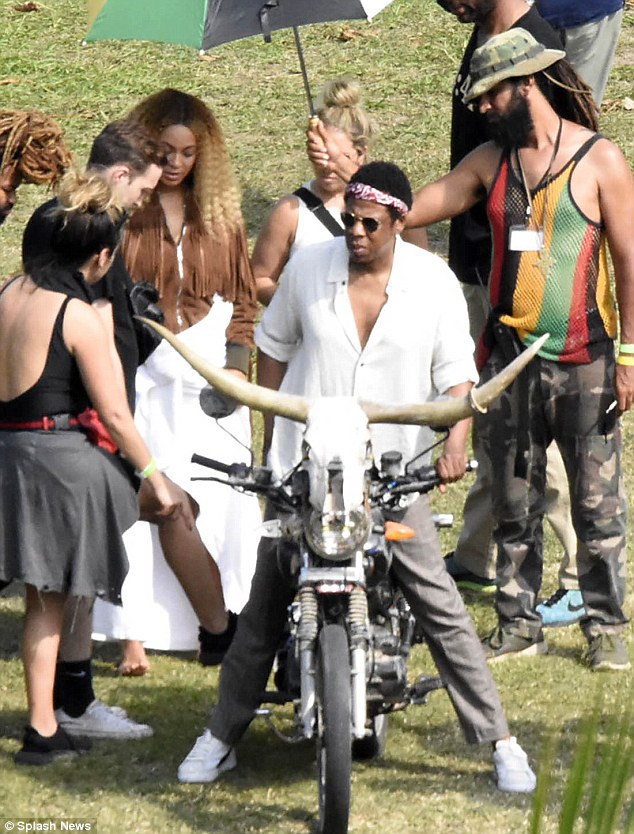 New project: It’s the second time this week the couple were seen filming on a motorcycle in Jamaica 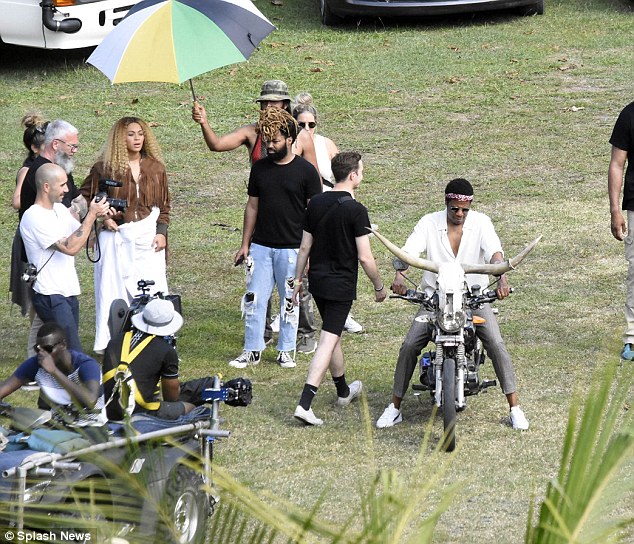 Teaming up again: The couple kick off their OTR II tour in June 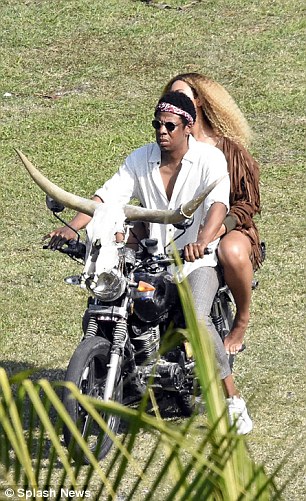 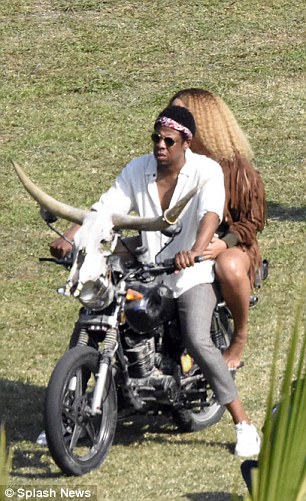 It seems they are back on good terms however after Bey and Jay reportedly bought a $21,000 diamond encrusted Lorraine Schwartz bracelet for Kim and Kanye’s baby daughter Chicago who was born in January.

The OTR II tour will kick off on June 6 in Cardiff, Wales and the international tour will stop in 15 cities across Britain and Europe, before visiting another 21 cities in North America, starting in Cleveland.

Jay and Bey last toured together in 2014, when their six-week sell out On The Road tour grossed a total of $109million. 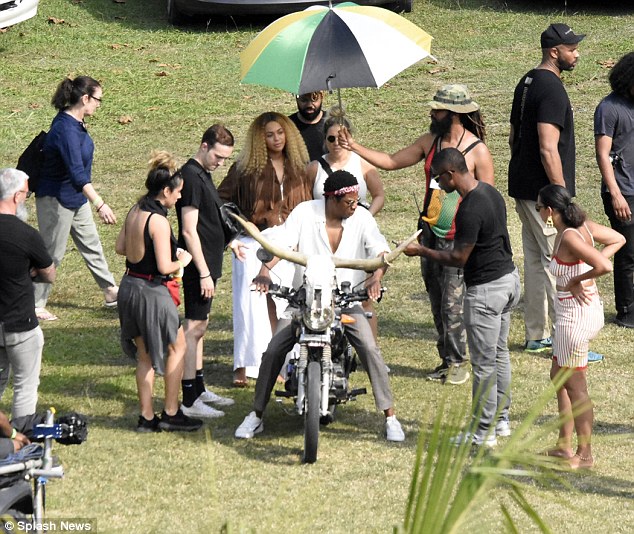 Action time: A helpful crew member provided some shade for the Grammy winner while she got ready to hop on the bike 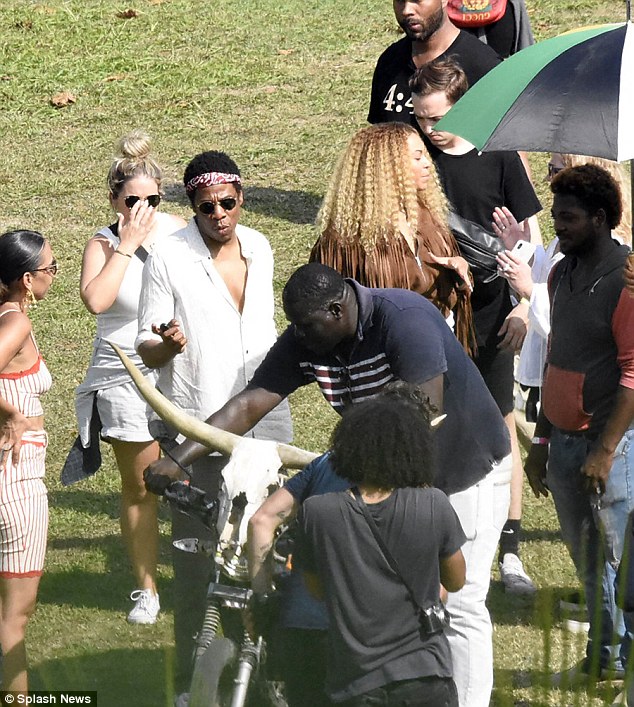 The OTR II tour will kick off on June 6 in the UK and will stop in 15 cities across Europe, before visiting another 21 cities in North America, starting in Cleveland