A bi-gender model who spent years – and tens of thousands of dollars – living as both a male and a female has revealed that she is now living ‘full-time as a woman outwardly’, but insists she has no plans to undergo gender reassignment.

Aria Veach, 29, made headlines around the world in 2014 when she went from forging a successful runway career as a menswear model known as Alexander, to working as a female catwalk star named Aria, and began transitioning from male to female.

Since then, Aria, who is based in California. has been living as a bi-gender person, however, going by both her male name and her female name, as well as the androgynous moniker of Alex, spending $12,556 to live as both a man and a woman.

Model moment: Aria Veach, 29, transitioned from male model Alexander to female catalog model Aria in 2014, and then lived both as a male and a female for years 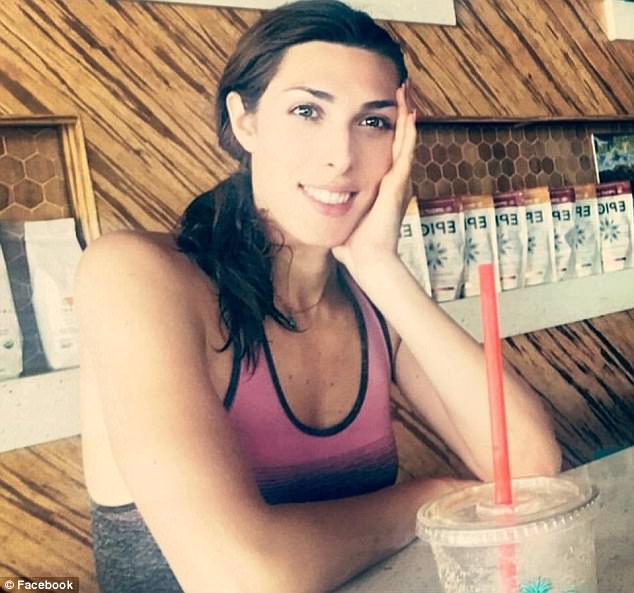 Brunette beauty: Now, the young model is living as a full-time woman, thanks to a whopping $12,500 transition that included massive doses of hormones and hair-removal operations 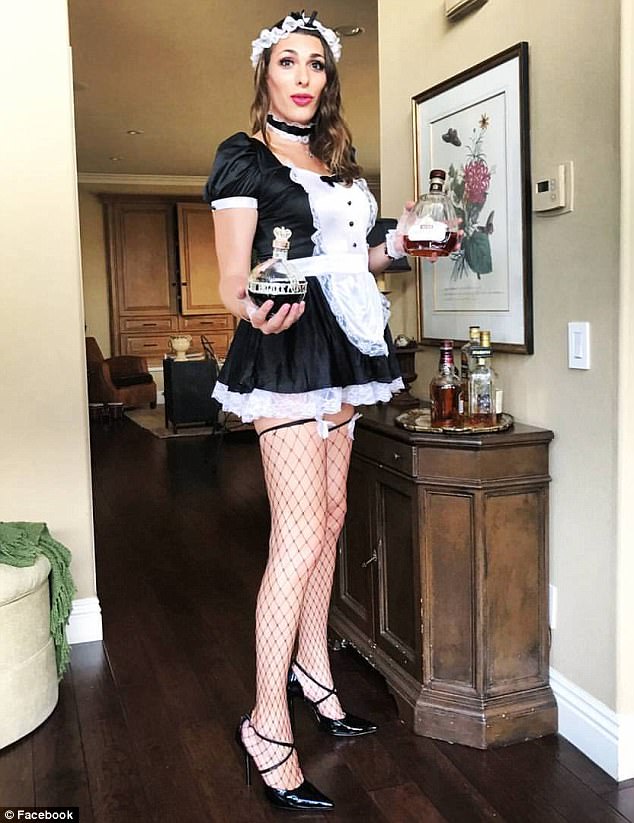 Belle of the ball: Aria said she lives as full-time woman outwardly but will keep her male sex organs, opting out of gender reassignment surgery 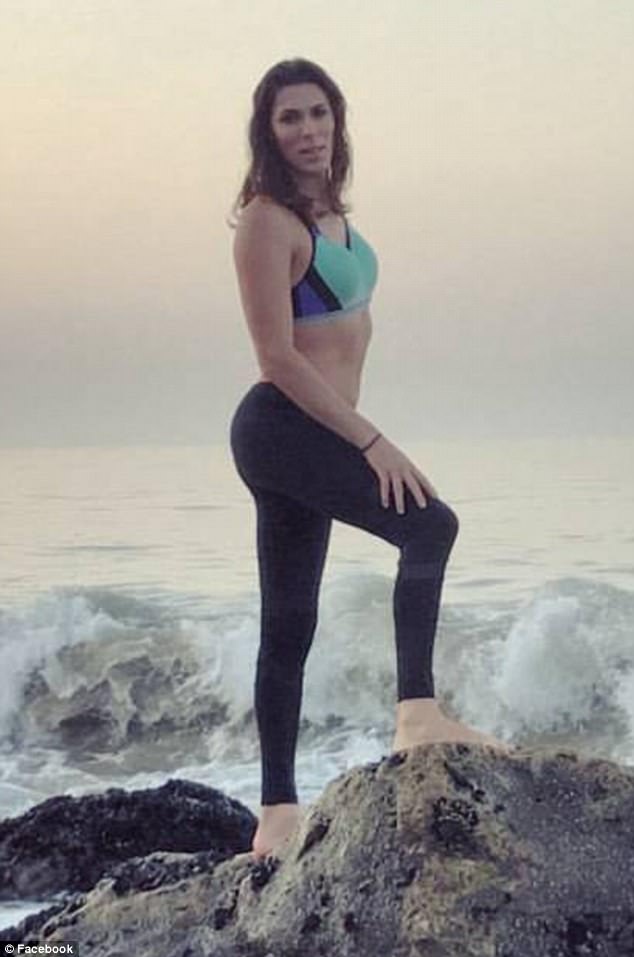 At home in her skin: The model revealed that she finally feels comfortable with her identity and body as is, and took to social media to share her happy photo on the beach

But now Aria has made the decision to live as a woman full-time – at least ‘outwardly’ – and is continuing to invest money in her transition, despite explaining that she plans to keep her male genitals.

Today Aria is a light-eyed brunette with dark brows and striking cheek bones, and says that she feels finally comfortable with her body that balances breasts with male sex organs.

‘I live as a full-time woman outwardly now, I do have the male Y chromosome, but I’m happy with who I am now,’ Aria said to Yahoo.

‘I love the feminizing effects of estrogen but also the pleasure I can give to a woman with the body that I have as a man,’ she added on her preference to skip sex-change surgery.

But to do so has been a bank-breaking expensive operation. Aria has spent $12,556 to remove all her body hair and to expense her estrogen, anti-aging hormones and Viagra, to maintain her precarious balance of sex function and appearance.

After spending thousands to alter her appearance from bearded man to slender woman, she reveals she doesn’t want to take the final sex-change surgery step.

‘I don’t feel the need to change my sexuality by surgery. I’m at a stage with the hormones where I feel comfortable living as both male and female, I’m scared of going further for fear of losing my sexual function,’ she said.

Her modelling spotlight and wads of cash spent on her transition won Aria a spot as a ‘doll’ on the show Plastics of Hollywood, currently in the works, which is dedicated to following the most plastic people on the planet including the human Ken dolls and Kim Kardashian and Jessica Rabbit lookalikes. 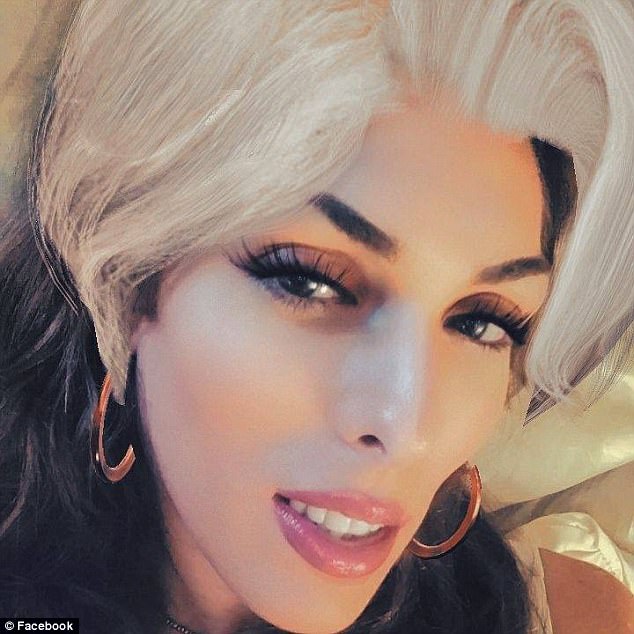 What a doll! Aria is a ‘doll’ on the upcoming TV show Plastics of Hollywood alongside other stars who have spend collectively over 3million in cosmetic surgeries to alter their appearance 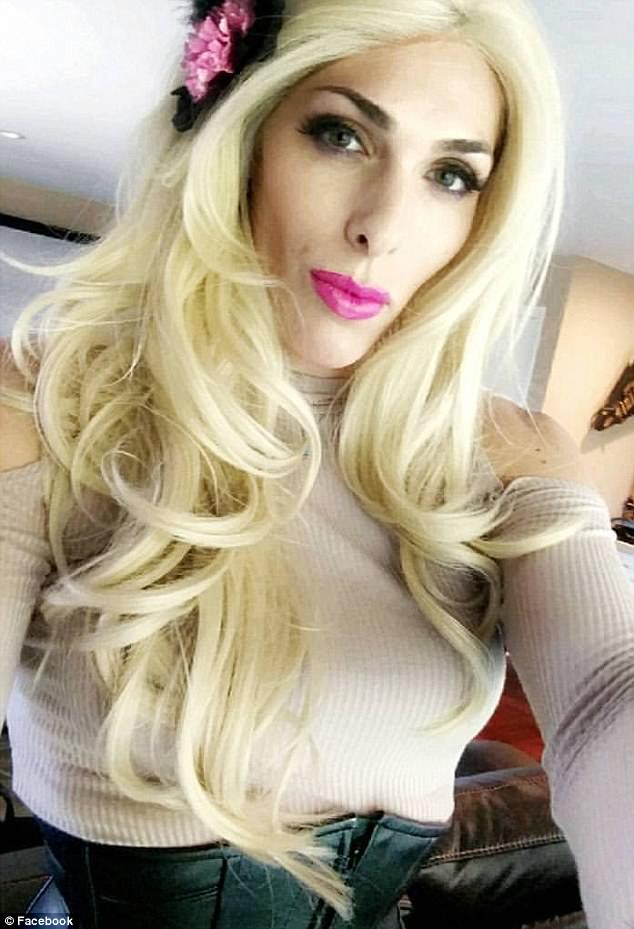 Blonde bombshell: The use of estrogen, anti-aging hormones and Viagra are part of Aria’s expensive transition into womanhood, pictured above on set for a photoshoot Lights, camera, action! The show Plastics of Hollywood (above on set) features Marcela Iglesias (right) as one one of the hosts who advises with Aria (left) on her female transition 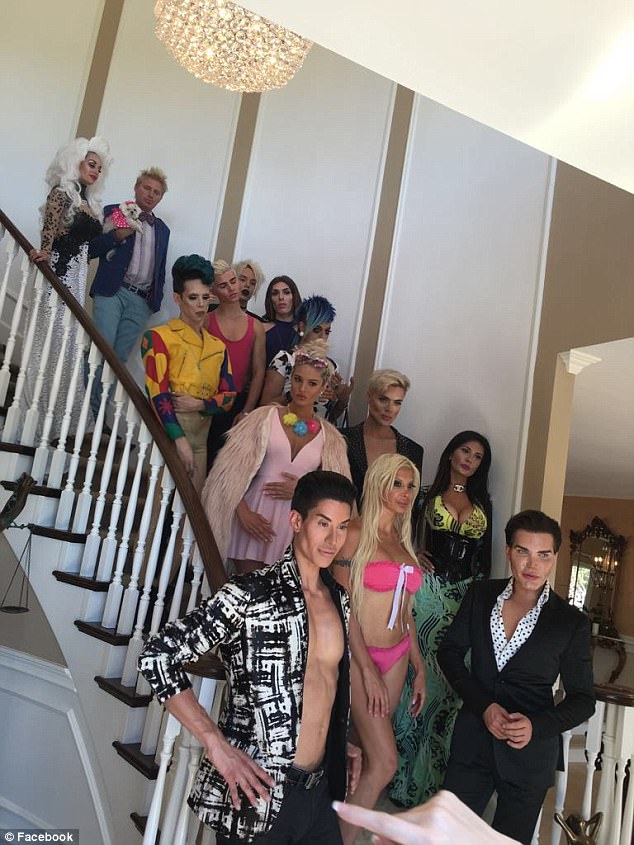 Dollhouse: Aria (in black, sixth from the left) looks vastly different from her plastic counterparts and will discuss her hormonal transition and debate surgery on screen

Together the cast has spent together nearly three million dollars to alter their appearances.

Aria looks vastly different from her show counterparts, thanks to her preference for hormonal changes instead of going under the knife.

According to the show’s host Marcela Iglesias, she is different from the rest of the ‘dolls.’

‘When I first met Aria she wanted plastic surgery to help her in the transition process, but now she’s in the middle and uncertain about going fully female,’ Marcela said to Yahoo!

‘I expressed that she needs to find out what she want to do with her life and body, if she feels good being a man sometimes, why not live as both male and female,’ the host added.

‘Aria is one of my special dolls, I like her character and personality a lot,’ she said on the model.

The doll, who is also a biomedical engineer, has experienced transphobia with her transition.

‘Everyone is so polarized, they believe a person has to be either man or woman, which is wrong, they are not familiar with the gender spectrum,’ Aria expressed.

‘I have accepted being both part man and part woman,’ she added. 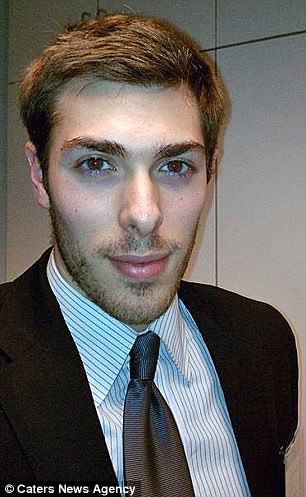 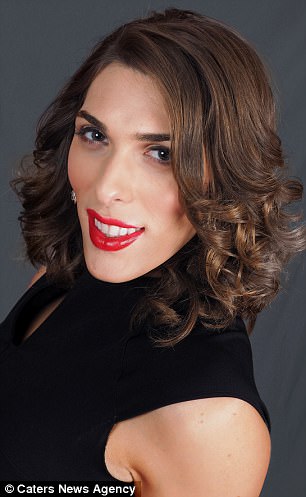 Before and after: Aria smiles for the camera as a man (left) and poses on a modelling set as a woman (right) after coming out as transgender in 2014 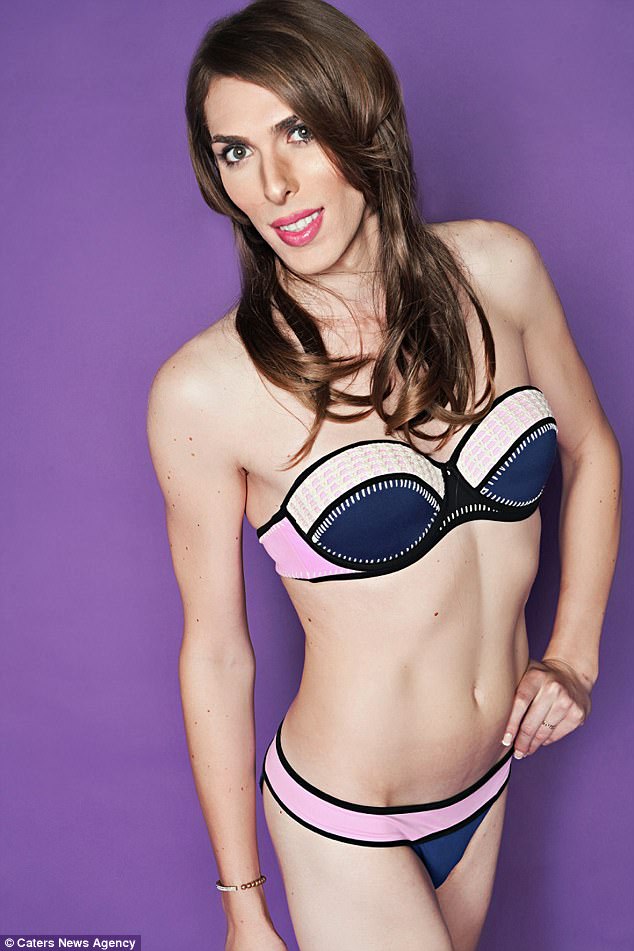 Feeling fabulous: Aria made her start as a female model by appearing in catalogs

The TV show star reveals her expensive and extensive transition was worth the financial stretch and she feels better than ever, and has even shaved years off her face.

‘I don’t feel any less fit in a Darwinian sense, I have frozen my best sperm and am looking much younger than I did five years ago,’ she revealed to Yahoo!

‘I want to live as both male and female, I know my brain has changed a lot and I believe it has been altered for the better by taking hormones, she added.

Her dramatic transition began back in 2014 where as a man she looked vastly different with facial hair and a short chop haircut.

‘Before I had a beard, was engaged to a woman, I was into Muay Thai Kickboxing and with my fashion, people said I was very masculine looking, that’s how I presented myself,’ Aria revealed to Caters News Agency.

‘I knew I was curious about my gender for the longest time but could never act on it, I didn’t begin crossdressing until I was out of my home state,’ she added.

‘I started dressing androgynously on and off, wearing little make-up until my hormones kicked in, my testosterone dropped and physical changes started,’ she said.

Finally the changes got in the way of the male modeling career.

‘In my final shoot as a man, I needed to remove my shirt, but by then my upper body had changed and breasts had started to grow. Then I knew there wasn’t any reason to wear men’s clothing anymore, and I was too uncomfortable doing it,’ Aria said to Caters. 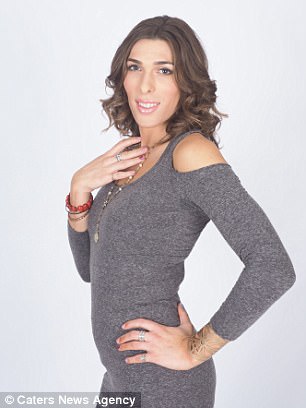 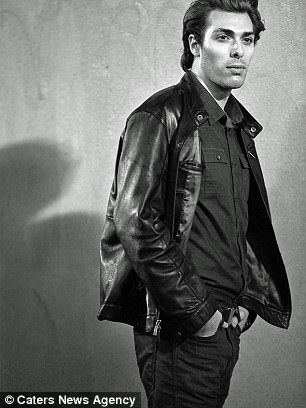 Road to womanhood: Aria (left) reveals she feels most comfortable in her skin now as a woman compared to when she was a man, Alexander (right) 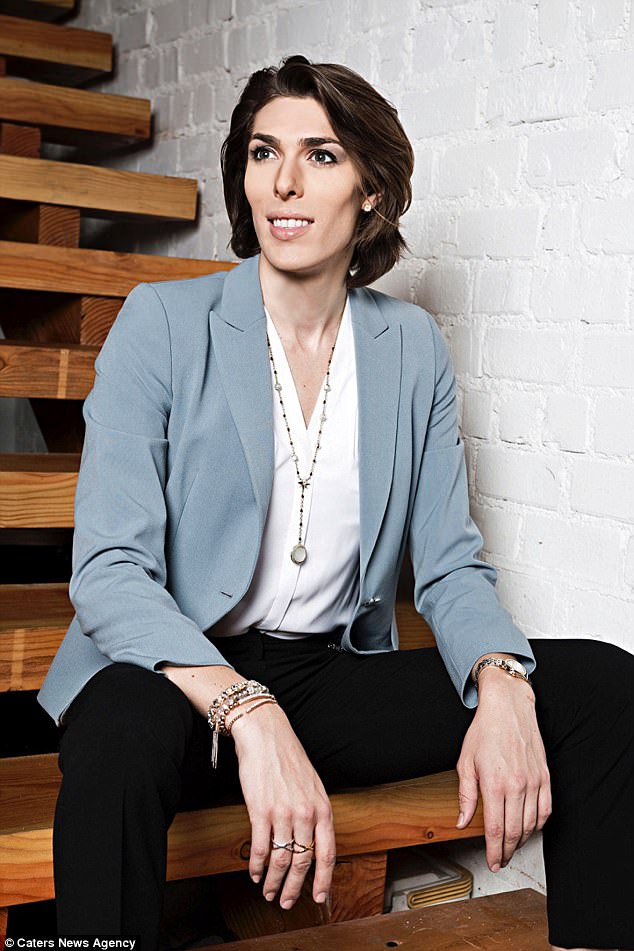 Strike a pose: The model glows in a photo from her androgynous period of her career

‘Now I’m happier as Aria and I think you can get a smile out of me much easier than you ever could have as Alexander,’ she expressed.

‘I now live a double life working full-time as a bioengineer and hustling for modelling and acting opportunities in Hollywood,’ she added.

Two years ago, she started hormone therapy, shortened her name to Alex and her modelling look became more androgynous.

Then last year, she finally found the courage to live as Aria full-time and started acting and modelling as a woman for catalogues and catwalks.

Despite finally feeling happy in her own skin, her family still refuse to accept her transition.

‘My family refused to support me and still can’t accept it, when I let them in they reject me or try to “reverse me,”‘ Aria shared.

‘My mother tells me to be trans is to be “unlovable” because she’s concerned no woman would be interested in me along with the stigma of dating a transgender,’ she added.

Despite the backlash, Aria feels more confident in her skin post transition.

‘I simply feel happier expressing myself as a woman, I desire my body to be of the female form and I crave deeper emotional connections and self-awareness that comes with that,’ she said.