Traditional bicycle helmets should be resigned to protect against facial injuries, a researcher has claimed.

Dr Bellal Joseph is the head of the University of Arizona’s trauma, critical care and emergency surgery department.

In an article published in a prestigious medical journal, Dr Joseph suggested they would offer more protection if shaped like those used on motorbikes.

Dr Bellal Joseph is the head of the University of Arizona’s trauma, critical care and emergency surgery department. He claimed that helmets currently used ‘fail to provide adequate protection to the middle and lower facial areas’

Dr Joseph said: ‘While helmets have a good protective effect for the upper head region and brain, the middle and lower facial areas remain relatively unprotected.

‘The significant incidence of facial injury highlights the need for further emphasis on facial protection.

‘Clinicians involved in the management of facial trauma may potentially play an important role in raising awareness and advocating for these changes.’

The US Census Bureau estimated that there were 885,000 bicycle commuters in 2015 – signalling a 60 per cent increase in a decade.

Cycling UK estimates there are around 1.7million people in the UK who cycle every day, or most days.

Biking has become more popular across the world as authorities look to tackle sedentary lifestyles, air pollution and climate change.

Their greatest strength is preventing severe brain injuries and reducing the severity of bleeds inside the skull, Dr Joseph said. 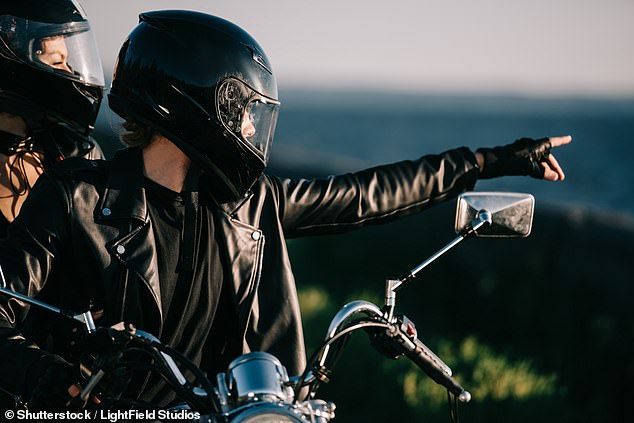 In an article published in a prestigious medical journal, Dr Joseph suggested they would offer more protection if shaped like those used on motorbikes

WHAT ARE THE LAWS ON BICYCLE HELMETS? AND DON’T BETTER ONES ALREADY EXIST?

Currently, there are no laws requiring cyclists in the UK to wear helmets. The law varies by state in the US.

There has, however, been a growing push in recent years for helmets to become compulsory, amid a spike in the number of people on the roads.

Though, many cycle groups oppose the concept of such a law. Cycling UK argues having to wear a helmet would put many off cycling – a key form of exercise for thousands of people.

On its website, it also states: ‘In any case, there are serious doubts about the effectiveness of helmets. They are, and can only be, designed to withstand minor knocks and falls, not serious traffic collisions.’

Helmets that protect more of the face already exist – but tend to just be worn by mountain bikers who can race down hills at high speeds. Such helmets can also cost in the region of £180 ($240).

Evans Cycles, a bicycle shop in the UK, suggest that road helmets don’t offer the same protection to the back and side of the head because users are less likely to fall on dangerous terrain.

In comparison, mountain bikers may fall off and land on stones, branches and tree roots, it says.

And he said most bicycle helmets offer protection to the upper third of the face, by covering the frontal bone – above the eyes.

He wrote: ‘But unlike with motorcycle helmets, the middle and lower thirds of the face remain relatively unprotected.’

Dr Joseph warned the middle of the face, which consists of some bones just 2mm thick and air-filled spaces, is less resistant to forceful impact.

He said: ‘In many instances, the cheek may be the first point of collision, leading to midfacial fractures of the maxillary and zygomatic bones.

‘Mandibular fractures following chin contact, especially in the absence of a chin cap, are also not uncommon.’

An analysis of more than 50,000 bicycle related injuries in 2012 by Dr Joseph and his team found only 25 per cent of patients wore a helmet.

The researchers found that wearing a helmet did not reduce the risk of fractures of facial bones, including the mandible, nasal and orbital.

Dr Joseph argued that ‘multiple systematic reviews’ conducted since have made similar findings about bicycle helmets.

He said: ‘Insight into helmet designs and quality may potentially reveal why current helmets fail to provide adequate protection to the middle and lower facial areas.

‘Helmets are tested for their capacity to mitigate the main factors that cause traumatic brain injury.

‘However, the mechanisms of bicycle-related injuries are usually complex… and could involve high speed, hazardous road conditions, and loss of balance.’