President Joe Biden ignored shouted questions about the situation in Afghanistan after he made his first public comments since Monday – and threatened to use legal pressure to try to maintain COVID masking in schools.

Biden spoke from the East Room Wednesday afternoon amid a new policy recommendation on vaccine booster shots – at a time when top officials are being pressed to respond to the chaotic events on the ground in Afghanistan.

But with the amid the turmoil there after the Afghan government capitulated to the Taliban, Biden picked a fight with an opponent closer to home: GOP governors who have been using the power of their offices to prevent schools from requiring students to wear masks to ward off spread of the virus.

‘If you aren’t going to fight COVID-19, at least get out of the way of everyone else who’s trying,’ President Joe Biden said Wednesday, as he picked a fight with GOP governors who have used their power to try to prevent local districts from requiring mask usage in schools

‘Today I’m directing the Secretary of Education, an educator himself, to take additional steps to protect our children. This includes using all of his oversights authorities and legal action if appropriate, against governors who are trying to block and intimidate local school officials and educators.’

‘I’ve said as I said before, if you aren’t going to fight COVID-19, at least get out of the way of everyone else who’s trying,’ he said, in another missive aimed at GOP governors.

‘You know, we’re not going to sit by as governors try to block and intimidate educators protecting our children.’

HIs shots came as several GOP governors, including Florida Gov. Ron DeSantis, have tried to prevent local authorities from requiring masks in schools – despite the Centers for Disease Control guidance on universal masking in schools even for vaccinated people. 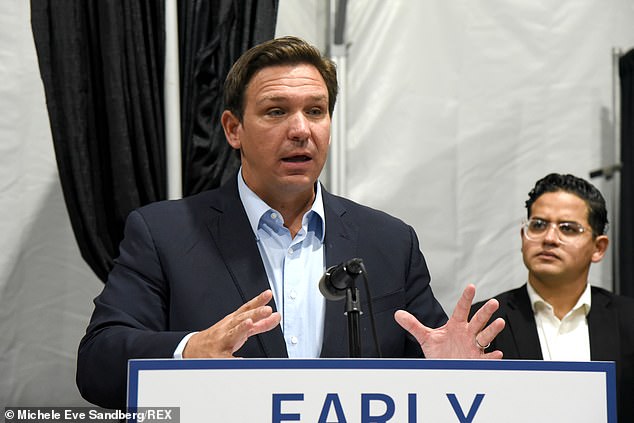 Biden issued his latest broadside against Florida Gov. Ron DeSantis, whom he did not name specifically, by going after governors who are trying to use their authority to prevent local mask mandates in schools 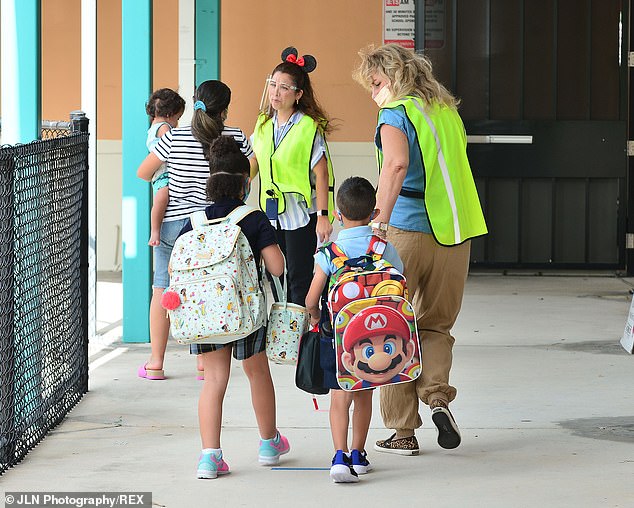 ‘You know, we’re not going to sit by as governors try to block and intimidate educators protecting our children,’ said Biden 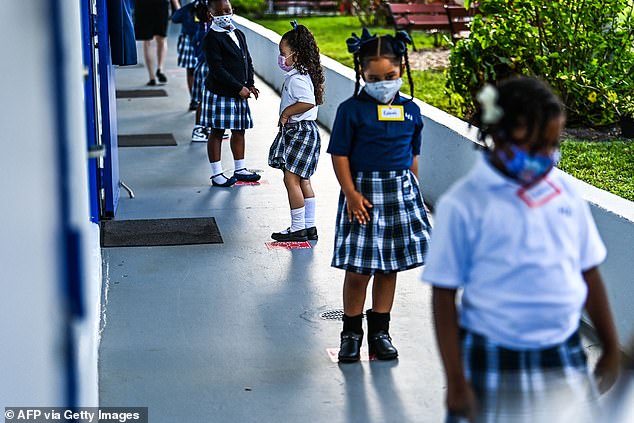 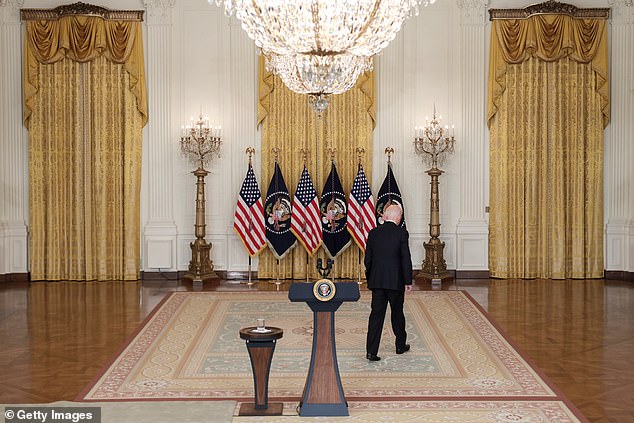 Biden did not respond to shouted questions about Afghanistan

He then alluded to a DeSantis move to cut the pay of local officials who try to defy him. Biden said he would make up the money from the taxpayer-funded coronavirus relief law.

‘For example, a governor wants to cut the pay for hardworking education leader who requires masks in the classroom. The money from the American rescue plan can be used to pay that person’s salary 100 per cent,’ Biden said.

DeSantis, a potential GOP presidential candidate, has been in a war of words with Biden, as he resists coronavirus mandates even as infections skyrocket in his state.

He signed an executive order asserting the state would have the authority to withhold funds from districts that refuse to follow his lede and impose mask mandates.

DeSantis’ office later tried to soften the threat, saying ‘only the salaries of superintendents and school board members who intentionally defy’ the order would get hit.

State educators resisted the pressure from DeSantis. ‘I guess I’ll go to my community to set up a GoFundMe or work at McDonald’s. At least I’ll be able to have a moral conscience and know I didn’t put someone’s life at risk,’ said Broward County School Board Chair Rosalind Osgood, the Miami Herald reported.

Biden tore into the idea of governors snatching away local control.

‘Some politicians are trying to turn public safety measures – that is children wearing masks in school – into political disputes, for their own political gain,’ Biden said.

‘Some are even trying to take power away from local educators by banning masks in school. They are setting a dangerous tone,’ Biden said.

‘I made it clear, and I’ll stand with those who are trying to do the right thing,’ Biden continued. He said he called school superintendents in Florida and Arizona to ‘thank them for doing the right thing and requiring masks in their schools. One of them said, “We teach science. So we follow the science.” The other said they have a guiding principle: students first … I just couldn’t agree more with what they both said,’ Biden said.

‘It’s probably the most significant threat to freedom in my lifetime. Certainly since the fall of the Berlin Wall,’ he said.

‘Taking it to its logical conclusion, you end up with Australia where they are forcing lockdowns at the point of bayonet,’ he added.

‘Our view is that you shouldn’t have government forcing kindergartners to wear masks for eight hours a day,’ he said.

After Biden’s last dig intended for DeSantis, the Floridian replied that he did not want to ‘hear a blip about COVID from you, thank you,’ adding: ‘Why don’t you do your job?’