President Joe Biden left behind his fraught negotiations with European allies over gas and sanctions Friday and headed to Poland – where he will get a first-hand look at the humanitarian crisis facing Ukrainian refugees and visit a fabled division helping bolster NATO’s eastern flank amid Russia’s invasion.

The second and last stop of his trip will feature a mix of diplomacy, gestures of military might, and Biden’s reputation for consoling and grieving with those who have suffered loss – in this case some of the estimated 2 million Ukrainians who have fled to Poland since Russia launched its invasion last month.

It also puts him in touch with an important ally that has been bearing massive costs from Putin’s invasion – and has been pushing a tough line amid its own past experiences with Russian aggression.

Biden boarded Air Force One in Brussels without speaking to reporters, after fielding questions Thursday in a press conference that was suddenly moved up on his packed schedule.

It is the final stop on Biden’s hastily-arranged Europe trip where he attended a trio of emergency summits in Brussels to discuss the fallout of the invasion, while trying to maintain allied unity to pressure Russian President Vladimir Putin to reverse himself.

President Joe Biden waves as he boards Air Force One at Melsbroek military airport in Brussels, Friday, March 25, 2022. He flies to Poland, where he will meet with refugees and U.S. troops, and hold talks with Polish President Andrzej Duda

He said Putin’s ‘overwhelming objective is to demonstrate that democracies cannot function in the 21st century’ and sought to ‘break up NATO.’

Biden will travel to Rzeszów, bringing him to within 50 miles from Poland’s border with Ukraine, where fierce fighting is underway as U.S. and allied-supplied Ukrainian fighters seek to push back Russians from positions on the outskirts of cities and towns.

Biden spoke briefly about what he might encounter at a press conference Thursday, referencing his past trips to war-zones during his career.

‘It’s devastating. The thing you look at the most is you see these young children, you see children without parents that are in those camps or in – or refugees. You see women and husbands – men and women who are completely lost,’ Biden continued.

‘You see the look — that blank look on their face, that absolute feeling of, “My God, where am I? What’s going to happen to me?”

Upon his arrival at Rzeszów-Jasionka Airport, Biden will be greeted by Polish President Andrzej Duda and receive a briefing on the humanitarian response to the war.

It will be a demonstration of a growing bond between the two leaders brought on by Russia’s war, despite Duda’s past steps to crack down on the media and LGBT people, in moves with a shade of Putinism.

The European Union has accused Duda’s right-wing ruling party of rolling back judicial independence and cutting back on media freedoms.

The group Freedom House has labeled Poland a ‘semi-consolidated democracy.’ 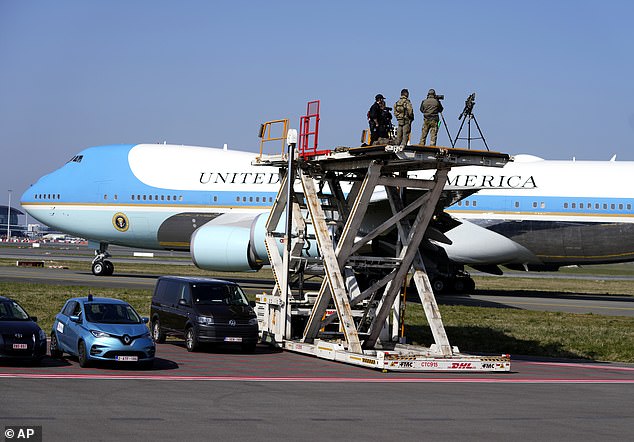 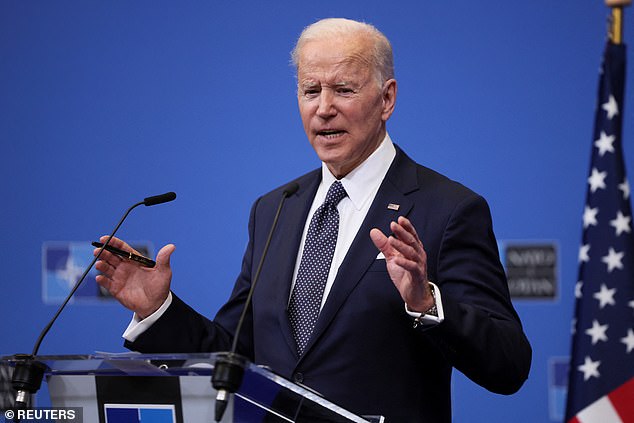 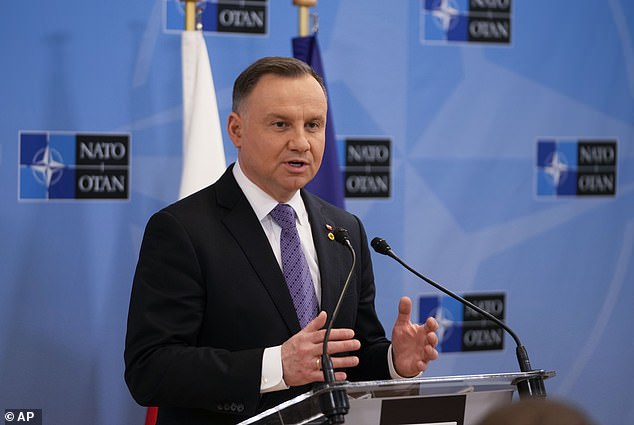 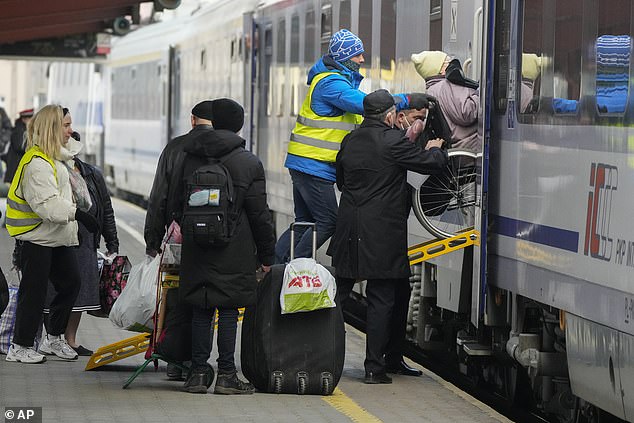 Volunteers help refugees board a train after fleeing the war from neighboring Ukraine at a railway station in Przemysl, Poland, on Friday, March 25, 2022. Biden spoke Thursday of his past trips to war zones 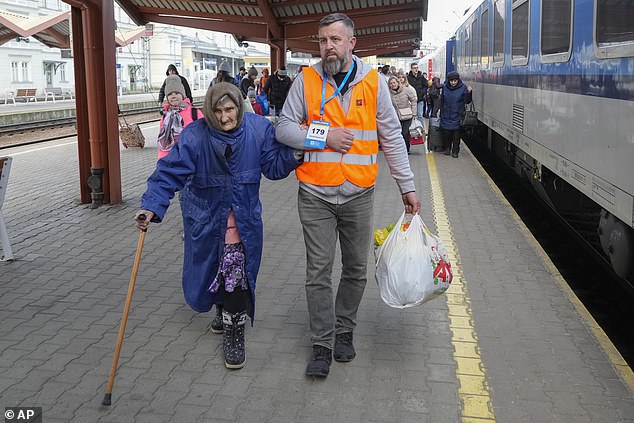 A volunteer helps an elderly Ukrainian refugee walk along a platform at a railway station in Przemysl, Poland, on Friday, March 25, 2022. Poland has taken in an estimated 2 million refugees, with many Poles sheltering Ukrainians in their homes 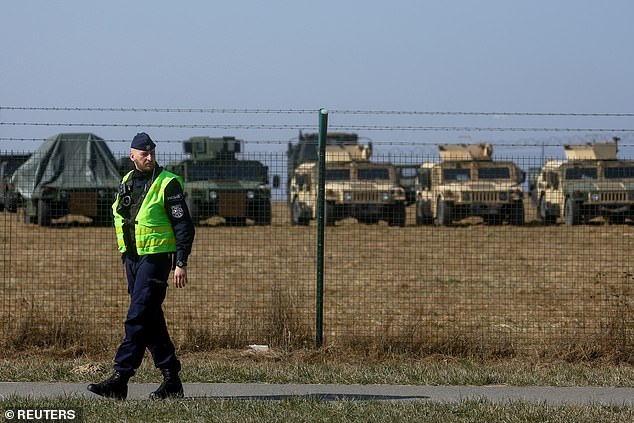 A police officer walks outside Rzeszow-Jasionka Airport as U.S. military equipment is seen inside, ahead of U.S. President Joe Biden’s planned arrival to visit Poland amid Russia’s invasion of Ukraine, near Rzeszow, Poland, March 25, 2022. Biden’s trip will take him about 50 miles from the Ukrainian border 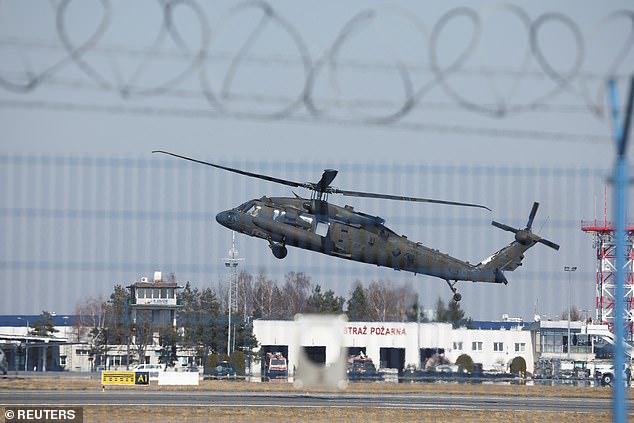 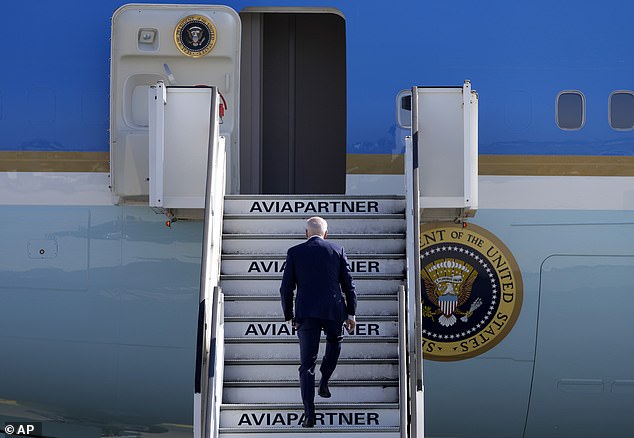 Biden’s hastily-arranged trip took him to an emergency NATO summit in Brussels, where he met a range of European allies, with his final stops in Poland

He’ll also meet with service members from the 82nd Airborne Division in Rzeszów before traveling to Warsaw in the evening.

He will meet with troops ‘who have been deployed to Poland to reassure our NATO ally and to deter further aggression on the Eastern flank,’ White House National Security Advisor Jake Sullivan told reporters en route to Poland.

Poland has taken in more than 2 million of the 3.5 million people who have fled the Ukraine.

Biden said he would try to meet with some of them while he was on the ground.

‘I’ve been to refugee camps, I’ve been in war zones for the last 15 years, and it’s devastating,’ Biden said at his Thursday press conference.

He said meeting with refugees in Poland would ‘reinforce my commitment to have the United States make sure we are a major piece of dealing with the relocation of all those folks.’

Biden’s trip comes a day after the United States pledged to accept up 100,000 refugees fleeing the war in the Ukraine.

In addition to welcoming more of the displaced, the Biden administration also announced more than $1 billion in new funding toward humanitarian assistance, particularly toward countries like Poland, which have been overwhelmed with refugees in need.

The funding will provide food, shelter, clean water, medical supplies and other forms of assistance, according to the White House.

His departure follows an announcement with European Union President Ursula von der Leyen of a deal on Friday to secure additional liquefied natural gas supplies for Europe in order to help wean the continent off it its dangerous addiction to Russian energy.

As part of the plan, the U.S. and other nations will boost the supply of liquefied natural gas to European countries by the end of 2022 with at least 15 billion cubic meters, the White House announced. Even larger shipments would be delivered in the future.

But it represents just a fraction of what Europe needs. And there are serious limitations on the ability of the U.S. to meet Europe’s energy needs. As of now, the U.S. doesn’t have enough terminals to ship the energy, and Europe doesn’t have enough to receive it, the New York Times reported.

Biden’s Poland stop comes the day after Ukrainian President Volodymyr Zelensky has scolded Europe for being too ‘late’ imposing sanctions on Russia and said Putin would ‘never’ have invaded if measures had been ‘preventative’.

He also pleaded with NATO allies to provide ‘one per cent’ of their jets and tanks to allow Ukraine to fight defense he has repeatedly described as not just of Ukraine, but of Europe and life itself.

The Ukrainian President made the comments during a late-night address to the European Council summit in Brussels in which he outlined the destruction Russia has caused his country.

He thanked Europe for imposing sanctions on Russia but said they were too late to stop Putin’s troops invading Ukraine.

‘You have imposed sanctions and we are grateful. These are strong steps,’ he said.

‘But it was a little late, because if it had been preventative, Russia would never have started a war.’

Part of Biden’s meetings on Thursday were directed at trying to get European allies to impose harsher financial sanctions. But the continent, which is more dependent on Russian energy supplies, has been hesitant to go as far as the United States would like. 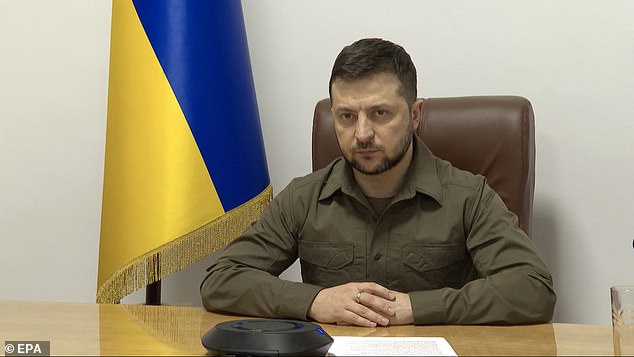 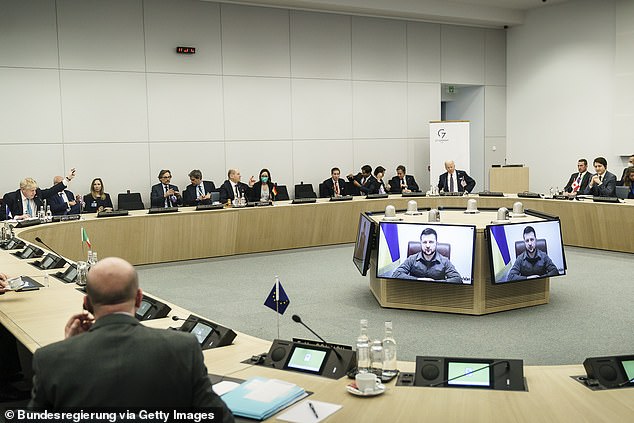 The Ukraine leader said Russia ‘would not have created a gas crisis’ in Europe if the Nord Stream 2 gas line, which runs from Russia to Germany, had been blocked earlier.

Biden and EU President Ursula von der Leyen announced a deal on Friday to secure additional liquefied natural gas supplies for Europe in order to help wean the continent off it its dangerous addiction to Russian energy.

As part of the plan, the U.S. and other nations will boost the supply of liquefied natural gas to European countries by the end of 2022 with at least 15 billion cubic meters, the White House announced. Even larger shipments would be delivered in the future.

It’s targeted at hurting Vladimir Putin’s war in the Ukraine with Biden noting the Russian president is using ‘the profits to drive his war machine.’

Biden said the deal ‘it’s going to put us on a much stronger strategic footing.’

Russia supplies 40 percent of the EU’s collective natural gas needs, 27 percent of its oil imports and 46 percent of coal imports.

A new deal to boost US gas shipments to Europe could clear the path for allies to sign on to tougher sanctions.

European countries remain divided, however, on whether to sanction Russian oil and gas directly, a move already taken by the United States. An EU embargo would require unanimous approval from all 27 member states.

In his speech, Zelensky also called on neighbouring nations to approve Ukraine’s request to join the European Union, adding: ‘Here I am, asking you not to be late. Please.’