President Joe Biden appeared to be rewriting history on Friday afternoon as he claimed to have visited the war torn countries of Afghanistan and Iraq as many as 39 times, despite the true number being closer to 21.

He made the astonishing claims as he spoke to war veterans in Delaware while also  telling them a previously unheard story of how his uncle Frank Biden, won a Purple Heart medal for his service during the Battle of the Bulge in 1944 during World War II.

But there appeared to be some glaringly inaccurate key details, not to mention no evidence whatsoever of such an honor ever being awarded.

Biden went on to explain how his father urged him have his brother, Frank, be awarded the prestigious medal normally given to those wounded or killed while serving, on or after 5 April 1917, with the U.S. military.

The president claimed all of this happened when he had been elected as vice president, in 2008. However, his uncle Frank had passed away in 1999 and his own father died in 2002 making such a conversation impossible.

President Biden made a gaffe as he claimed after being elected vice president in 2008, he awarded his uncle, Frank Biden, a Purple Heart for WWII service 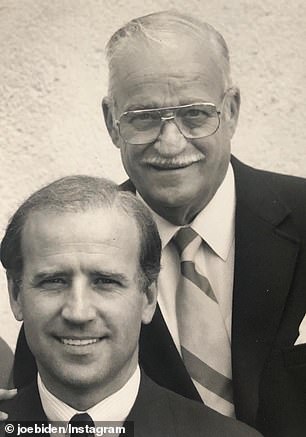 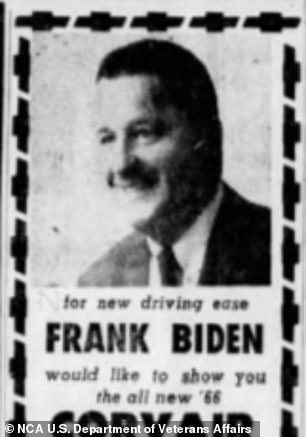 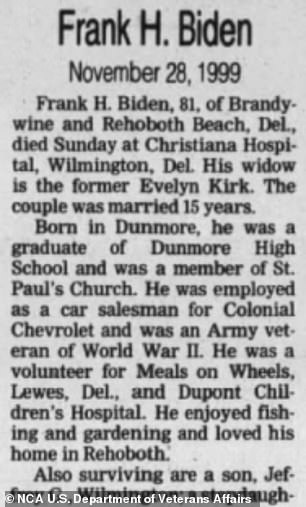 ‘My dad, when I got elected vice president in 2008, he said, “Joey, Uncle Frank fought in the Battle of the Bulge.” He was not feeling very well now — not because of the Battle of the Bulge, but he said, “and he won the Purple Heart and he never received it. He never got it. Do you think you could help him get it? We will surprise him”‘, the president said during his remarks on Friday.

‘So I got him the Purple Heart. He had won it in the Battle of the Bulge. And I remember he came over the house and I came out and [my father] said, “Present it to him, okay?” We had the family there,’ Biden continued.

The Battle of the Bulge was Adolf Hitler’s last major offensive in World War II in Belgium. It was the deadliest battle ever for the U.S. Army, which suffered 100,000 casualties.

Biden, 80, is well known for telling and often embellishing personal anecdotes as he tries build a rapport with audiences.

Friday’s falsities occurred during largely unscripted remarks to a group of veterans in Delaware as he attempted to demonstrate the humility of veterans.

Yet the very timeline of events would seem to indicate that is it not true. 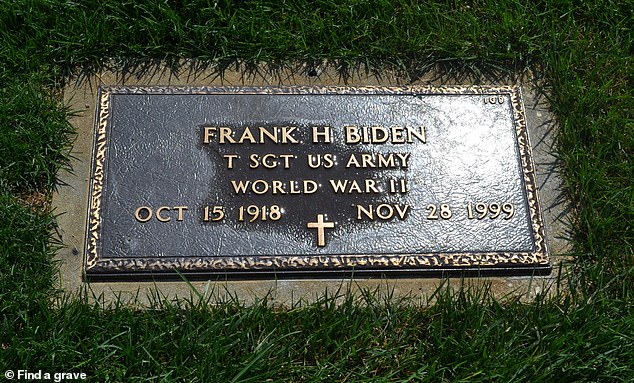 With regards to Uncle Frank Biden receiving a Purple Heart, his tombstone does not identify mention him as receiving one as such, neither it is mentioned in his obituary 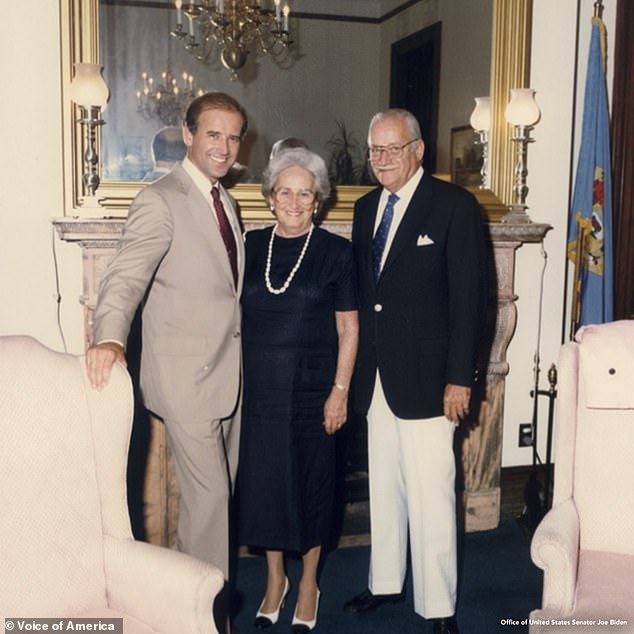 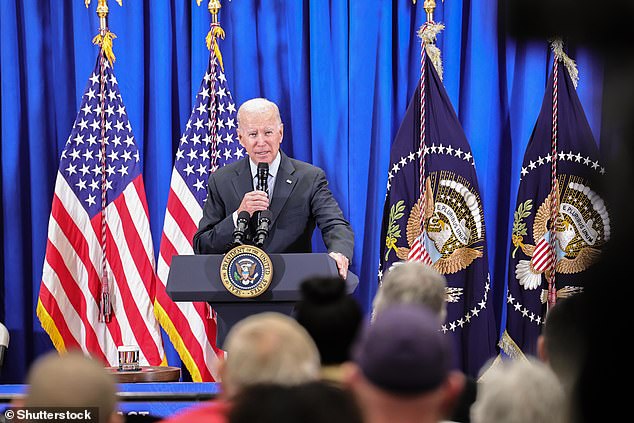 Joe Biden’s father, Joseph R. Biden Sr., died in September 2002, over six years before his Biden was elected to the vice presidency, while Frank Biden, Joe Sr.’s brother, died in 1999.

With regards to Frank Biden receiving a Purple Heart, his tombstone does not identify mention him as receiving one as such neither it is mentioned in his obituary.

A registry of Purple Heart recipients also fails to name him noted the New York Post.

It is not the first time that Biden appears to have told such false stories.

In 2019 he spoke of a Navy captain who had supposedly refused to accept a Silver Star for heroics in Afghanistan. On that occasion the Washington Post said Biden ‘jumbled elements of at least three actual events into one story of bravery, compassion, and regret that never happened.’ 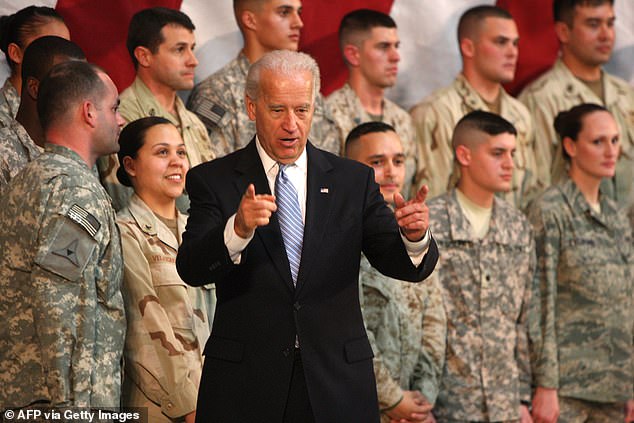 Biden also claimed to have visited Afghanistan and Iraq almost 40 times, ‘twice as president’ but his last visit to Iraq was in 2016, while for Afghanistan, it was in 2011. He is pictured at Baghdad’s Camp Victory in January 2011 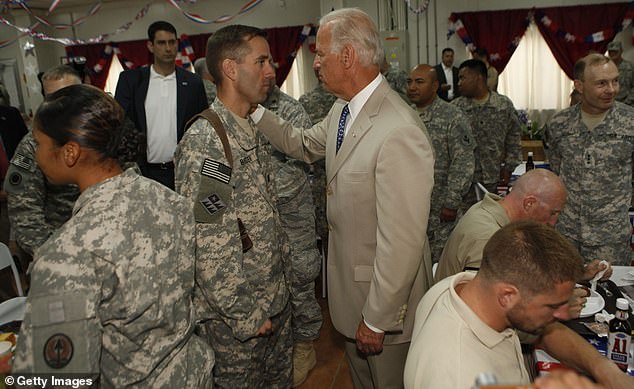 Then Vice President, Joe Biden talks with his son U.S. Army Capt. Beau Biden at Camp Victory in July  2009 near Baghdad, Iraq. This was his first visit to Iraq as VP

On Friday, Biden’s remarks contained further inaccuracies as he told veterans that he had been ‘in and out of Afghanistan, Iraq, and those areas 38, 39 times as vice president, only twice as president.’

Biden has traveled to Afghanistan and Iraq many times, including to visit his son who was serving in Iraq, but he has never visited either country as president. The last time he was in Iraq appears to be in 2016. For Afghanistan, it was in 2011.

Several times this year, Biden has incorrectly claimed his son Beau Biden died in Iraq. Beau died from brain cancer in 2015 at the age of 46.

His father has often blames his son’s illness and subsequent death on the exposure to toxins from burn pits in Iraq, used by the military to remove household trash and other toxic substances.

It’s a claim he has repeated in the past. During his first State of the Union address, Biden claimed to have been to both Iraq and Afghanistan ‘over 40 times,’ The actual number is closer to 21 some of which happened while he was still a U.S. senator from 1973 to 2009.

Biden has developed a habit over the decades of being somewhat economical with the truth – often in a way to  connect with audiences with whom he is speaking.

Also in October this told how firefighters almost died in 2004 while putting out a blaze in his kitchen. The local fire department later described as ‘insignificant’ for trained professionals.

In January, he told students at historically black colleges in Atlanta he was arrested during the civil rights protests of the 1960s – although the is no evidence of this.

The previous September he told Jewish leaders he went to the Tree of Life synagogue in Pittsburgh following the 2018 killing of 11 people there.

The synagogue says he never visited, although he did call the rabbi of the synagogue in 2019.