Biden must submit to a cognitive assessment at his next medical exam, concludes DR. NICOLE SAPHIER

Nicole Saphier, MD is a physician at Memorial Sloan Kettering Cancer Center, an assistant professor at Weill Cornell Medical College and bestselling author of ‘Panic Attack.’ Her opinions are her own and not reflective of her employers.

In President Joe Biden’s first extended sit-down with a professional journalist in over 200 days, the 79-year-old commander-in-chief was confronted with a question on the minds of many Americans.

‘Some people ask whether you are fit for the job,’ asked ’60 Minutes’ Scott Pelley, ‘And when you hear that, I wonder what you think.’

‘Watch me. Honest to God, that’s all I think. Watch me,’ the president responded.

Well, America is watching, Mr. President. As a physician and a concerned citizen, I believe it is past time that we received some real answers.

At his next annual medical examination at Walter Reed Medical Center, presumably to take place in November, President Biden should undergo a cognitive assessment, as did President Donald Trump. And those test results should be released to the American public.

While I am a physician, I haven’t formally examined President Biden. I cannot diagnose the president or any other person from afar. But common sense demands that we not ignore the troubling signs in front of our faces.

Since assuming office, Biden’s physical fitness appears to have declined.

In his November 2021 exam, the President’s physician noted that Biden’s, ‘ambulatory gait is perceptibly stiffer and less fluid than it was a year or so ago.’

The most recent apparent stumble occurred during a White House Conference on Hunger, Nutrition, and Health in Washington, D.C. on Wednesday.

This is not surprising, in fact, it’s an expected occurrence that comes with age.

But the concern is not only for the physical health in an aging president, there are also concerns over whether he is cognitively fit to handle the rigors of his position.

Biden’s public gaffes include major moments of misspeaking, walking with a shuffling-type gait, mumbling, and appearing confused at public events.

In fact, these troubling moments are nearly too numerous to mention here.

After an outdoor White House event in August, the president attempted to shake Senator Chuck Schumer’s hand after appearing to forget that they had just shook hands.

Following his remarks at the Global Fund Conference in September, Biden looked lost while walking off the stage, before appearing to ask the crowd where he should go.

In his ’60 Minutes’ interview, Biden contradicted official U.S. policy by saying that the U.S. military would defend Taiwan in the event the island was attacked by China. Hours later, the White House walked that statement back.

In February 2022, the president misspoke as Russia appeared poised to attack Ukraine.

‘It’s one thing if it’s a minor incursion and then we end up having a fight about what to do and not do, et cetera,’ he said in regard to a hypothetical U.S. response.

‘Are you effectively giving Putin permission to make a small incursion into the country?’ a reporter followed up.

The president laughed and said, ‘Good question. That’s how it did sound like, didn’t it?’ He did not correct his statement at the time.

The most recent apparent stumble occurred during a White House Conference on Hunger, Nutrition, and Health in Washington, D.C. on Wednesday.

As the president praised lawmakers in the room, Biden appear to seek out Republican Representative Jackie Walorski in the crowd. 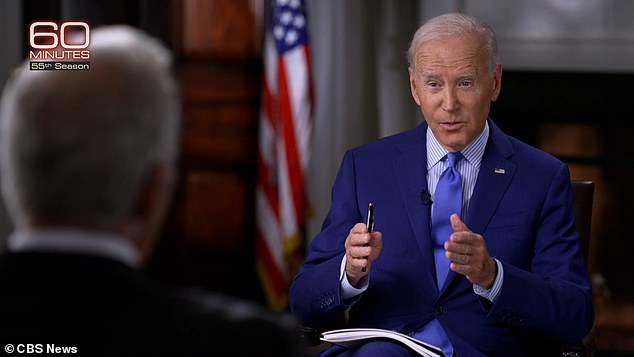 In his ’60 Minutes’ interview, Biden contradicted official U.S. policy by saying that the U.S. military would defend Taiwan in the event the island was attacked by China. Hours later, the White House walked that statement back.

Walorski was a prominent supporter of legislation to address food insecurity among Americans.

In August, Representative Walorski and two aides were tragically killed in a car accident in her northern Indiana district.

President Biden recognized her death in a statement at the time. Walorski’s brother revealed on Wednesday that President Biden even called his family shortly after the accident and expressed his personal condolences.

‘He made a phone call after my sister was killed and he was very sincere in his relaying the grief process…,’ Keith Walorski told the New York Post. ‘Yeah, it was a big mess-up today. Inexcusable? No. Unforgivable? No. I’m not gonna hold it against him. I just feel sorry for him.’

One reasonably asks: why did the president appear to think that Representative Walorski was alive and in the room with him, if he had spoken to her family eight weeks ago regarding her death?

It is not inappropriate to ask if the president’s short-term memory is sub-par.

This latest gaffe came up repeatedly during the White House briefing on Wednesday during which Press Secretary Karine Jean-Pierre refused to admit that the President had made a mistake.

Instead, she said the late congresswoman was ‘top of his mind’ since members of her family would be meeting with him this week.

Her explanation did not sit well with the White House press corps. And it shouldn’t. There is good reason to question President Biden’s mental acuity, and I am not the first to raise this issue.

In August 2021, retired surgeon and former Iowa congressman Greg Ganske wrote in the Des Moines Register about his concerns over the president’s ‘mental acuity.’

Ganske recounted his personal interaction with the then-senator in 1997 when Biden was 54 years old, and Ganske noted how much Biden had changed over 20 years.

‘It pains me greatly to see a decline in President Biden, and it worries me,’ he wrote.

‘There’s enough evidence to legitimately require an inquiry into his mental acuity,’ he concluded. 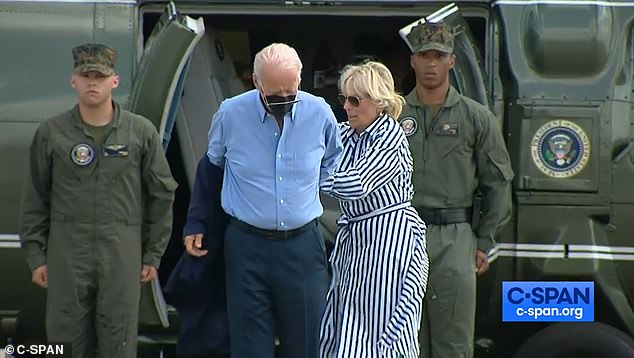 (Above) While surveying the aftermath of devastating storms that tore through Kentucky, Biden stepped off Marine One and struggled for 30 seconds to put on his jacket – even with the help of first lady Jill Biden

In a new statement to DailyMail.com, Ganke writes, ‘I am being vindicated.’

During Trump’s time in office political pundits and medical professionals did not shy away from questioning his mental health.

In 2018, President Trump received a cognitive test as part of his annual health screening.

The Montreal Cognitive Assessment (MoCA) is designed to assess cognitive impairment or early dementia. According to the White House, President Trump who was 72 years old at the time, received a perfect 30 out of 30 score.

It is not indecent to ask for full transparency of physical and cognitive fitness of our political leaders. These can be tough topics to discuss, yet the public deserves transparency.

America needs to put its best foot forward as the country faces the fallout from the pandemic, war in Europe, the opioid crisis, a failing public education system, continued inflation, and a myriad of other pressing issues.

As a medical professional, we assess future risk and requisite health screenings based on individual life expectancy and whether their state of health is compatible with future challenges.

President Biden and all our political leaders should not be excluded from this essential determination. Americans deserve nothing less.