President Joe Biden on Wednesday announced he was sanctioning the company building Russia’s Nord Stream 2 pipeline, which Germany halted certification of Tuesday – a coordinated response to Russia’s incursion into Ukraine.

‘Today, I have directed my administration to impose sanctions on Nord Stream 2 AG and its corporate officers,’ the president said in a statement. ‘These steps are another piece of our initial tranche of sanctions in response to Russia’s actions in Ukraine.’

The president also warned, ‘we will not hesitate to take further steps if Russia continues to escalate.’ 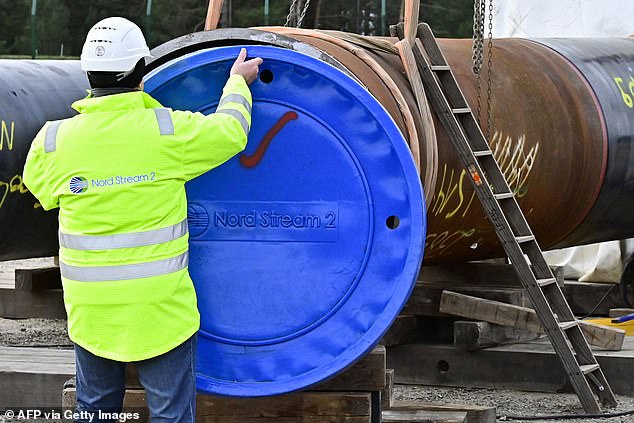 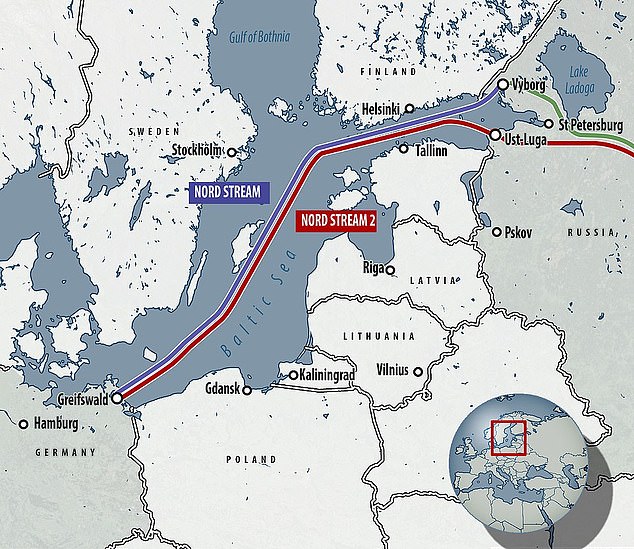 The State Department’s spokesman Ned Price said Wednesday afternoon that Nord Stream 2 was ‘an $11 billion prize investment that is now a hunk of steel, sitting at the bottom of the sea.’

When the new German Chancellor Olaf Scholz visited the White House earlier this month, Biden said at a joint press event that they were in lockstep about the pipeline as Russian President Vladimir Putin threatened Ukraine with a military build-up.

This week as Putin declared separatist territories in eastern Ukraine ‘independent’ and brought in ‘peacekeeping’ forces, the United States and its European allies have started sanctioning Russia.

On Tuesday, Scholz announced that Germany wouldn’t certify the pipeline.

Construction was finished on Nord Stream 2 in September.

The company Nord Stream 2 AG is registered in Switzerland, but its parent company is the Russian state-owned gas firm Gazprom.

Nord Stream 2 would have doubled the amount of Russian gas going into Germany.

‘Through his actions, President Putin has provided the world with an overwhelming incentive to move away from Russian gas and to other forms of energy,’ Biden said in the statement.

‘I want to thank Chancellor Scholz for his close partnership and continued dedication to holding Russia accountable for its actions,’ the president also said.

Biden received rare praise from Republican Sen. Ted Cruz for his initial step of rescinding sanction waivers that had been applied to the project.

‘President Biden made the right decision today,’ the Texas Republican said in a statement.

Cruz called on Biden to ‘lock in sanctions,’ which Biden did later Wednesday afternoon.

For Biden’s actions, Cruz announced he would be unblocking the Biden administration’s State Department nominees he was holding up in the Senate. 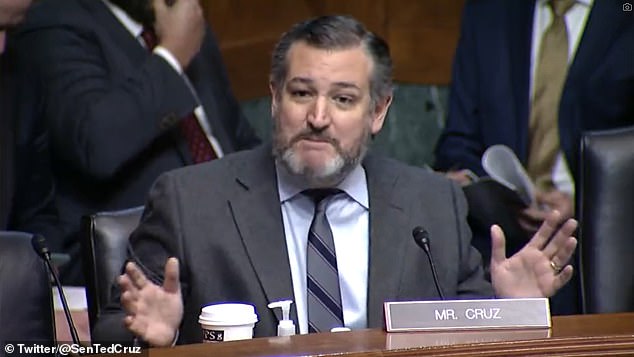 ‘I went in yesterday and there was a television screen, and I said, “This is genius,”‘ Trump said. ‘Putin declares a big portion of the Ukraine – of Ukraine – Putin declares it as independent. Oh, that’s wonderful.’

‘No, but think of it. Here’s a guy who’s very savvy,’ Trump went on. ‘I know him very well. Very, very, very well. Had I been in office, not even thinkable, this never would have happened.’

Trump added: ‘But here’s a guy that says, you know, “I’m gonna declare a big portion of Ukraine independent,” he used the word ‘independent’ and ‘we’re gonna go out and we’re gonna go in and we’re gonna help keep peace.’ You gotta say that’s pretty savvy. And you know what the response was from Biden? There was no response. They didn’t have one for that. No, it’s very sad. Very sad.’

Trump also called Biden ‘a man who has no concept of what he’s doing.’

‘As a matter of policy, we try not to take advice from anyone who praises President Putin and his military strategy, which I believe is what happened there,’ Psaki replied at the Tuesday briefing when asked to react to the comments Trump made earlier in the day.

She pointed to comments Trump reportedly made to G7 leaders in 2018, when the now former president said that Crimea, which was annexed by Russia after a 2014 invasion, was a part of Russia because everyone there spoke Russian.

And said that Trump had ‘expressed an openness’ to lifting sanctions on Russia for the 2014 invasion.

Most Republicans have said they want to see Russia punished for what the White House is now calling an ‘invasion’ of Ukraine – after Putin announced Monday he would consider two Russia-backed separatist territories independent from Ukraine, and ordered troops there under the guise of ‘peacekeeping functions.’

When asked if there were concerns comments like Trump’s could lead to support of Ukraine becoming a more partisan issue among the American public, she pointed a finger at the Republican Party.

‘You know, I think that is up to members of the Republican Party to make the decision, to make the determination,’ she told DailyMail.com.

‘There has been a long history, decades of history, which President Biden was a part of when he was chairman of the Foreign Relations Committee, of standing up to the efforts of any country to seize the territory of another country, standing up for efforts by the United States to rally global support against inappropriate and illegal actions by another country,’ she continued. ‘There’s a long history of that not in a partisan way – in a partisan way.’

‘And certainly that choice is up to Republicans to … determine,’ she added.

A new Associated Press-NORC Center for Public Affairs Research poll that was released Wednesday showed that Americans had little appetite for the U.S. to play a major role in the Ukraine-Russia conflict.

But in a departure from the traditional hawk and dove roles of the two political parties – with Republicans historically more hawkish – Republicans were less inclined to want the U.S. to play a major role by 10 points.

The survey found that overall 26 per cent of American adults said they wanted the U.S. to play a major role – with 32 per cent of Democrats in that group and 22 per cent of Republicans.