The commander-in-chief, 78, looked to be blowing off steam following the disappointing outcome, as he gathered with his family for a weekend trip to Camp David, his first trip to the presidential hideaway since being sworn-in.

In a clip shared to Instagram Stories by his granddaughter, Naomi, 26, the president can be seen sitting at a Mario Kart Arcade GP console as he competes against his family members.

‘Secret Service made an exception and let him drive himself!!!’ Naomi captioned her short clip.

‘A little rusty, but he still won (barely),’ she added.

Biden cut a casual figure in blue jeans and a baseball cap during the Saturday night gaming.

It appeared first lady Jill Biden was also watching them play, as a blonde woman was seen in the video hovering over the game in a green parka and black leggings.

President Biden is known for spending time with his four granddaughters – Naomi, Finnegan, 21, Maisy, 20, and Natalie, 16.

Meanwhile, the president and first lady are also grandparents to two-year-old Navy Joan – the product of their son Hunter’s brief affair with Lunden Roberts, an Arkansas woman who was working at a D.C. strip club.

It is not believed the Bidens have met the little girl. 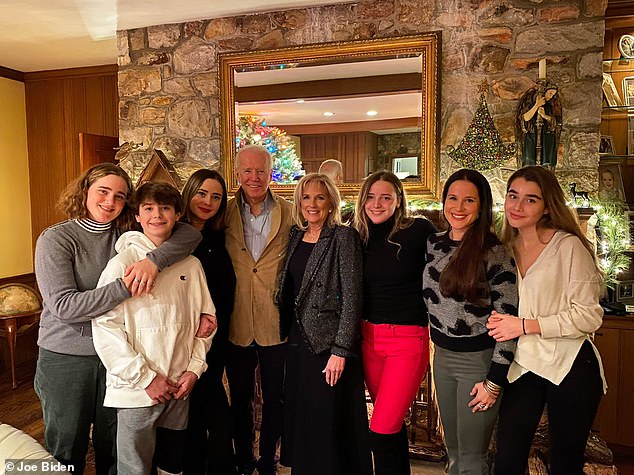 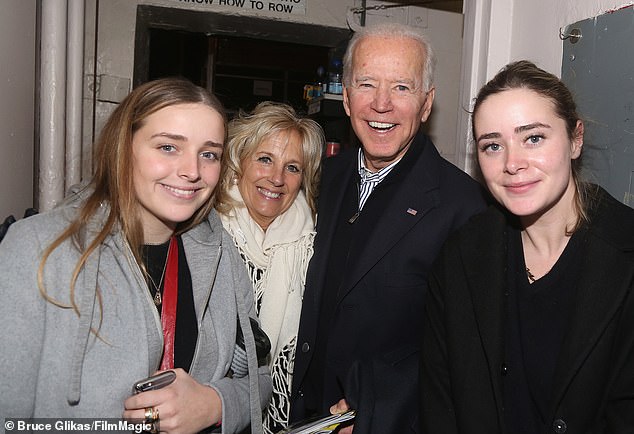 On Saturday night, the Biden White House also released a statement from the president responding to Trump’s Senate acquittal.

‘While the final vote did not lead to a conviction, the substance of the charge is not in dispute,’ the president said in the statement.

While the final vote did not lead to a conviction, the substance of the charge is not in dispute. Even those opposed to the conviction, like Senate Minority Leader McConnell, believe Donald Trump was guilty of a “disgraceful dereliction of duty” and “practically and morally responsible for provoking” the violence unleashed on the Capitol,’ the statement read.

Biden said that following the trial, he was thinking of those who died on January 6, as well as ‘those who demonstrated the courage to protect the integrity of our democracy – Democrats and Republicans, election officials and judges, elected representatives and poll workers – before and after the election.’

The senate voted 57- 43 to convict Trump on the charge of inciting insurrection – however Democrats fell short of the 67 votes needed for a conviction. 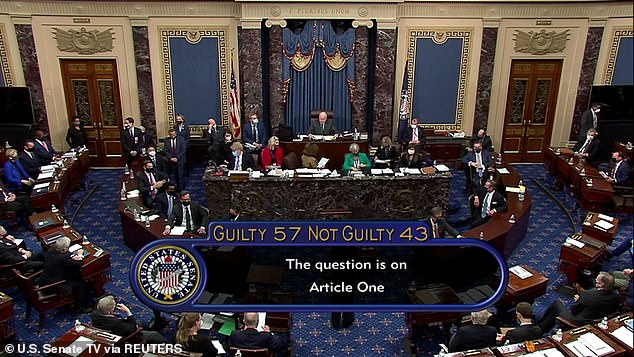 The Senate voted 57-43 to convict, falling far short of the 67 votes needed even as seven Republicans joined with the Democrats on the question

Meanwhile on Saturday evening, White House Deputy Press Secretary TJ Ducklo tended his resignation after he reportedly threatened a Politico reporter who was working on a story about his secret romantic relationship with a journalist who had covered the Biden campaign.

‘I am devastated to have embarrassed and disappointed my White House colleagues and President Biden, and after a discussion with White House communications leadership tonight, I resigned my position and will not be returning from administrative leave,’ Ducklo said in a statement on Saturday.

‘No words can express my regret, my embarrassment, and my disgust for my behavior. I used language that no woman should ever have to hear from anyone, especially in a situation where she was just trying to do her job,’ he said.

Vanity Fair reported on Friday that Ducklo had made threats – including ‘I will destroy you’ – to Politico reporter Tara Palmeri, who was writing a piece about Ducklo’s romance with an Axios reporter, Alexi McCammond. 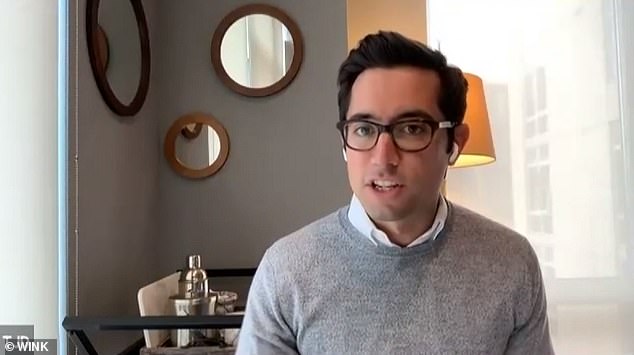 The White House confirmed Ducklo’s resignation, saying in a statement: ‘We accepted the resignation of TJ Ducklo after a discussion with him this evening.’

‘This conversation occurred with the support of the White House Chief of Staff. We are committed to striving every day to meet the standard set by the President in treating others with dignity and respect, with civility and with a value for others through our words and our actions,’ the statement added.

White House Press Secretary Jen Psaki had come under fire for her initial decision to suspend Ducklo for one week without pay, despite Biden’s vow of a zero-tolerance policy for abusive behavior in his administration.

Journalists heavily criticized the suspension as inadequate, saying it was a signal that reporters were fair game for abuse in the new administration. 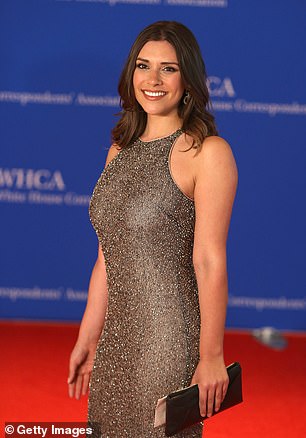 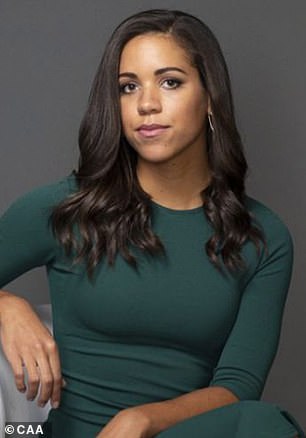