President Joe Biden publicly conceded Friday that the dollar amount of the proposed $3.5 trillion reconciliation bill was going to shrink during a speech at a child care center in Connecticut.

‘We’re not going to get $3.5 trillion, we’ll get less than that. We’re going to get it. And we’re going to come back and get the rest,’ he said, addressing a room partially filled with Democratic lawmakers.

He expanded the topic as he left the state, capping off a day where he visited a child development center and helped dedicate the Dodd Center for Human Rights.

‘But the question is how much of what is important will we get into the legislation. I’m of the view that it’s important to establish the principle on a whole range of issues, without guaranteeing you get the whole things here. It doesn’t matter. You establish it. I don’t know of any major change in American public policy that’s occurred by a single piece of legislation.’

‘Look, it’s clear that it’s not going to be $3.5 trillion,’ President Joe Biden told reporters, when asked about the current reconciliation bill being whittled down amid objections by two Senate Democrats

Biden appeared to be weighing in on the concept of keeping as much in the bill as possible, even if elements are not funded for the full term as originally sought in the $3.5 trillion plan.

‘So what happens is you pass the principle and you build on it. It’s a fact that it works or it doesn’t work,’ he said. He was asked about a line he said earlier in the day where he indicated he may not get funding for free community college.

As Biden arrived at the Capitol Child Development Center and hugged children playing outside, he was greeted with ‘f*** Joe Biden’ from a group of Trump supporters, who also referred to those accompanying the Democratic president as ‘traitors.’ 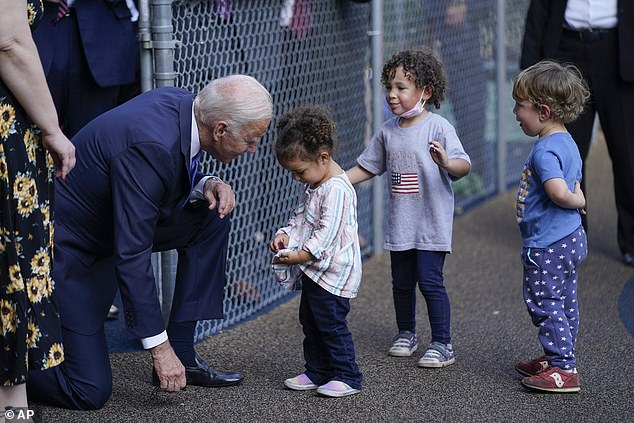 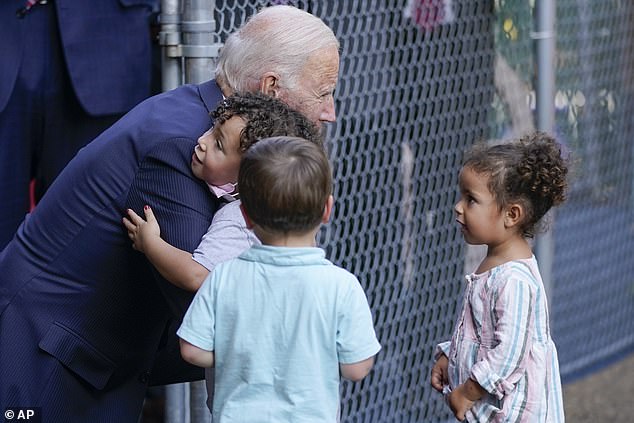 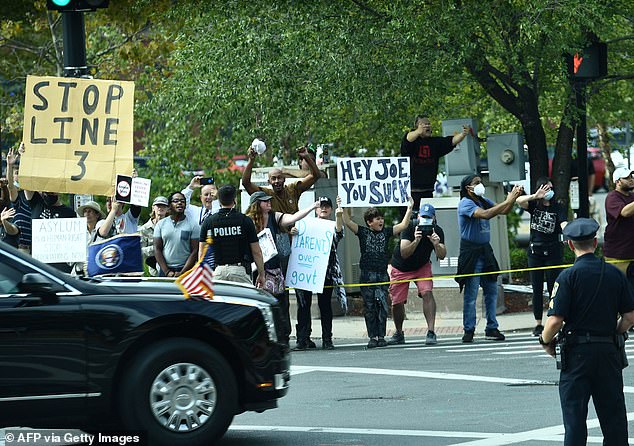 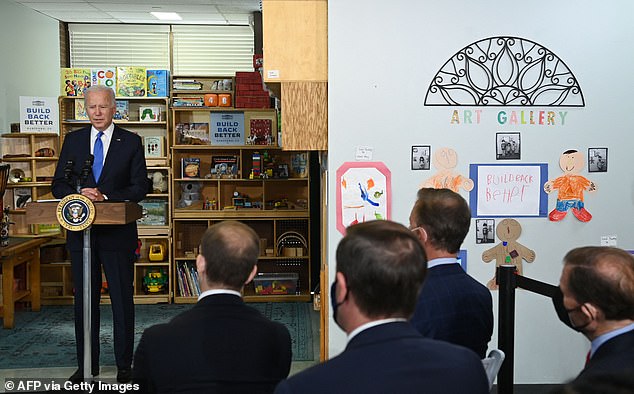 Biden, however, remained chipper, naming all the Connecticut lawmakers in the room and telling stories about their family members.

He then talked about his own family when bringing up child care costs.

Biden brought up the Christmastime accident that killed his first wife and baby daughter, leaving sons Beau and Hunter injured.

‘And so I thought, well, I’ll get some help. And I was making a decent salary as a U.S. senator – $42,000 a year – that was a decent salary. And I could not afford childcare,’ Biden recalled. ‘Everybody wonders why I commuted everyday, 265 miles a day, to be back and forth with my children. I could afford the train. It was cheaper.’

It’s currently tangled up in Congress, with moderate Democratic Sens. Kyrsten Sinema and Joe Manchin wanting to decrease the original $3.5 trillion pricetag in a number of ways.

Biden told the Democratic caucus in a closed-door meeting on a recent trip to Capitol Hill that they should be prepared for closer to a $2 trillion bill, Axios reported.

During Friday’s speech Biden also indicated that free community college could be on the chopping block.

‘I don’t know if I can get it done, but I also have proposed this free community college,’ Biden said.

Earlier on Air Force One, deputy press secretary Karine Jean-Pierre brushed off a question about whether the child care element of Biden’s so-called ‘Build Back Better’ agenda was in jeopardy as negotiations progressed.

‘This is just part of the democratic process,’ she said, while relenting that the White House understands ‘there are differences of opinion within our party.’

Insider reported Thursday that the bulk of Democrats are getting frustrated with Manchin and Sinema, especially Sinema – who won’t let her colleagues know where she stands and is, instead, negotiating directly with the White House.

Sinema reportedly doesn’t want taxes to go up for individuals and large corporations, which would rob Democrats of about $700 billion in revenue to pay for the bill.

She also said she won’t vote on the reconciliation package in the Senate, until the House passes the $1.2 trillion bipartisan infrastructure package that already got through the Senate.

In Hartford, Biden aimed grievances at Republicans and tax cheats, not his fellow Democrats.

‘So my friends on the other side never had any problem creating $2 trillion in tax cuts for the very wealthy,’ Biden said.

‘Now, look, I don’t think you shouldn’t be able to make a million or a billion dollars. I’m a capitalist. But guess what? I’m also listed as 36 years as the poorest man in Congress,’ he continued. ‘But I make big money now that I’m president,’ he joked.

He then said several times ‘pay your fair share,’ at one point, again, talking in a whisper. 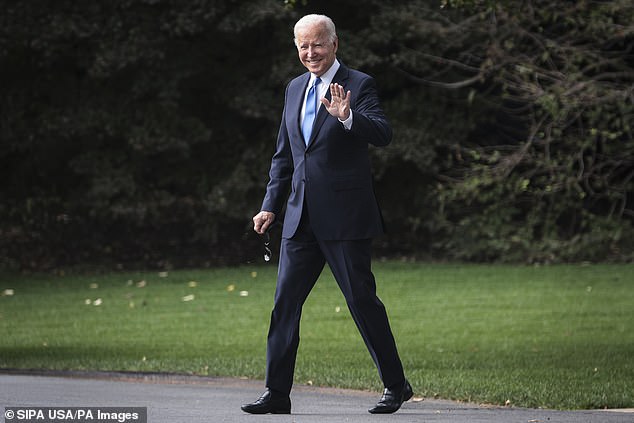 After Biden’s remarks at the child care center, he’s going to give a second speech Friday at the dedication of the Dodd Center for Human Rights, a favor to Biden’s former Senate buddy, Chris Dodd, who represented Connecticut.

Jean-Pierre pointed to the earlier speech, and the tour of a childcare facility in Hartford, when asked by a reporter why Biden cut out time to go to the Dodd dedication.

‘And the Dodd Center is focused on human rights. I think that’s incredibly important as well, especially as America takes our seat back as one of the leaders around the globe so all, both very critical, important events that he’s doing in Connecticut,’ she explained.

‘And you’ll hear from him – he’ll be giving two speeches and you’ll be hearing exactly why he’s there and the importance of his visits,’ she added.

Earlier he departed the White House and again ignored reporters questions as he marched toward Marine One.

‘Can we ask you about inflation?’ a male reporter was heard yelling, as the president looked at the group but didn’t approach.