Joe Biden is rejecting another executive privilege claim by Donald Trump as he tries to invoke the right in order to withhold the White House visitor logs from the House select committee investigating the January 6 Capitol riot.

In a letter sent to the National Archives on Tuesday, which was obtained by The New York Times, Biden’s White House Counsel Dana Remus told the archivist of the U.S. David Ferriero the agency should provide the material to the panel within 15 days.

Former President Trump is attempting to invoke executive privilege to keep the panel form obtaining the logs, just as he did with other White House documents that were turned over to the committee earlier this month.

The White House plans to inform Trump Wednesday morning of the rejection for his executive privilege claim, according to the Times.

Trump could try to block or slow the release of the logs like he did with other White House documents and materials. 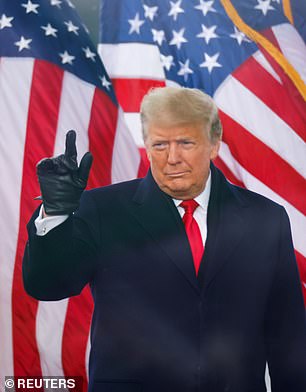 Remus requested the logs be turned over in 15 days ‘in light of the urgency’ of the committee’s probe and insisted ‘Congress has a compelling need’ for the National Archives to disclose the documents.

‘Constitutional protections of executive privilege should not be used to shield, from Congress or the public, information that reflects a clear and apparent effort to subvert the Constitution itself,’ Remus wrote to the Archives.

She added that the records should include ‘visitor logs showing appointment information for individuals who were processed to enter the White House complex, including on Jan. 6, 2021.’

Trump went to federal court to block the release, but lost his bid.

Law requires presidents preserve records related to administration activity, but the National Archives has limited enforcement over this.

One Archives official said that the Presidential Records Act operates through more of a ‘gentlemen’s agreement.’