REVEALED: Biden shut down Pompeo-led effort to prove theory COVID originated from Wuhan lab over concerns about quality of evidence – Trump continues to double down that it was obvious that’s where virus came from

Joe Biden’s team shut down a State Department investigation into the Wuhan laboratory as a source of the COVID-19 outbreak, CNN reported on Tuesday night.

The existence of the investigation, run primarily out of the State Department’s arms control and verification bureau, had not been previously known – nor had the Biden administration’s actions.

The revelations will lead to uncomfortable allegations for Biden that his team politicized the public health effort, and harmed the nation by shutting down a useful inquiry begun by his predecessor.

The theory of a lab leak had been promoted heavily by Donald Trump, who blamed China for unleashing COVID-19 on the world. Critics said that Trump was blaming China to distract from his own mishandling of the pandemic.

Yet now the idea that the virus escaped from a laboratory in China is gaining mainstream support, with leading scientists who previously expressed skepticism – such as Anthony Fauci – now saying it is plausible.

Trump on Tuesday night told Newsmax that he felt vindicated.

‘I said it right at the beginning, and that’s where it came from,’ he said. 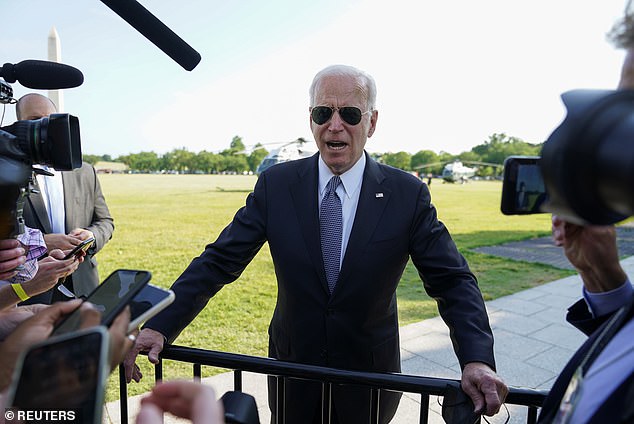 A team working for Joe Biden, seen on Tuesday, shut down the inquiry in February or March

Among those most active in suggesting the ‘lab leak’ theory was Mike Pompeo, Trump’s Secretary of State, and someone known to be highly suspicious of China.

In May Pompeo, following Trump’s lead, said there was ‘enormous evidence’ and a ‘significant amount of evidence’ to support the claim that the virus escaped from a lab.

Last fall allies of Pompeo began their investigation to answer whether China’s biological weapons program could have had a greater role in the pandemic’s origin in Wuhan, two additional sources told CNN.

‘People in the US government were working on the question of where COVID-19 came from, but there was no other effort that we knew of that took the lab leak possibility seriously enough to focus on digging into certain aspects, questions and uncertainties,’ said David Feith, a former senior State Department official who was briefed on the efforts.

The inquiry quickly became bogged down in politics, sources said, amid fears that the investigators were cherry-picking facts to boost Trump’s narrative.

‘The way they did their work was suspicious as hell,’ said one former State Department official who was familiar with the effort.

‘They basically conducted it in secret, cutting out the State Department’s technical experts and the Intelligence Community, and then trying to brief certain senior officials in the interagency on their ‘tentative conclusions’ even before they’d let the department leaders they worked for know an investigation was underway at all.’

The decision to terminate the inquiry was made after Biden officials were briefed on the team’s draft findings in February and March of this year, a State Department spokesperson said.

A source told CNN that the investigation was shut down because the Biden team had doubts about the ‘legitimacy of the findings’.

Those involved told CNN the questioning of their evidence was unfair and unwarranted, and insisted they had been objective.

A State Department spokesperson confirmed work on the inquiry had stopped, saying: ‘Even though this discrete project has concluded, the State Department continues to work with the interagency to look into the COVID origins issue.’