President Joe Biden paid tribute to his son Beau on the sixth anniversary of his death as he delivered remarks commemorating Memorial Day in Delaware on Sunday as he previewed his upcoming meeting with Russian President Vladimir Putin.

‘This is a hard day for us,’ Biden said while speaking to veterans and families of fallen military members during remarks at Veterans Memorial Park near the Delaware Memorial Bridge.

‘Six years ago today, Hunter lost his dad, and I lost my son,’ Biden said of losing Beau in 2015 to brain cancer.

‘Beau didn’t die in the line of duty, but he was serving a Delaware National Guard unit in Iraq for a year,’ the president continued. ‘That was one of the proudest things he did in his life.’

‘So thank you for allowing us to grieve together today.’ 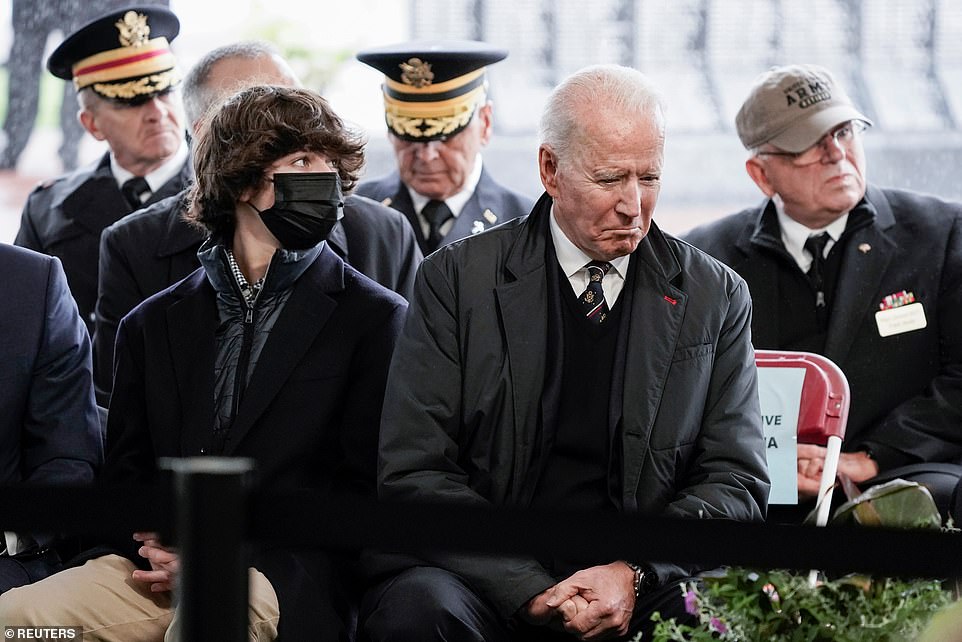 The president was joined at the event by his grandson Hunter (left), the son of the late Beau Biden. Biden is also marking the sixth anniversary of his son’s death on Sunday 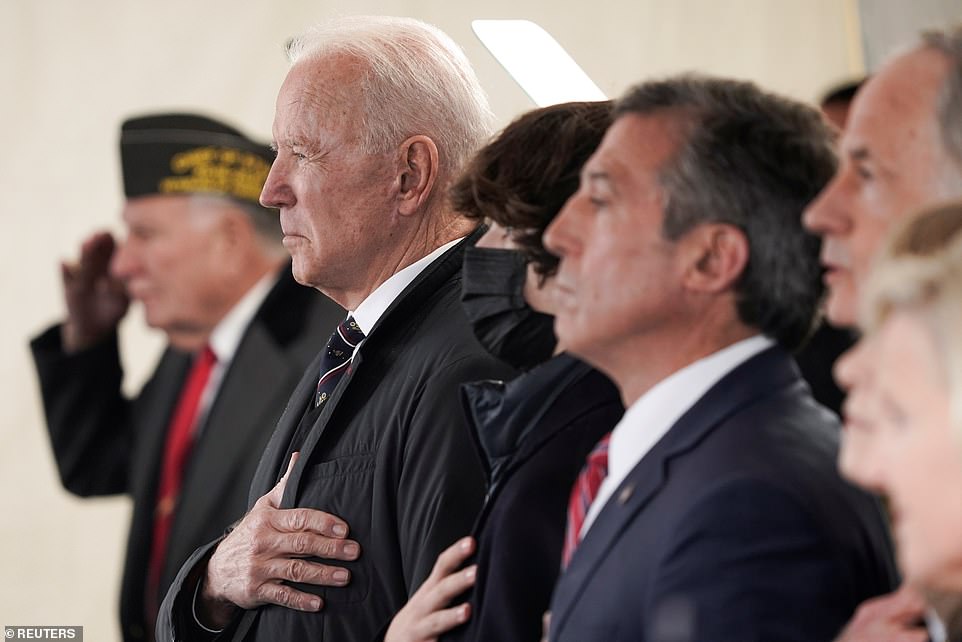 Biden stands and puts his hand over his heart for the National Anthem during an annual Memorial Day Service in Wilmington, Delaware 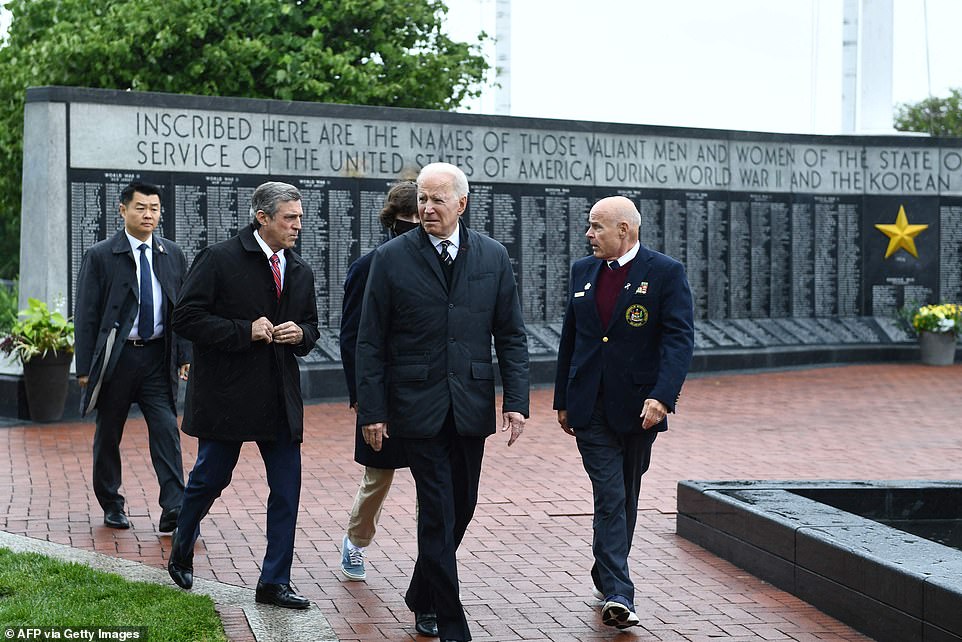 Biden arrives with Delaware Governor John Carney to his left. The memorial behind him lists the names of military members from New Jersey and Delaware who died in the line of duty

Beau Biden, who attained the rank of major, joined the Delaware Army National Guard in 2003 and attended JAG School at the University of Virginia. He deployed to Iraq in October 2008, the month before his father was elected vice president to serve with Barack Obama for his first term. Beau returned from Iraq in September 2009 after completing his yearlong stint on active duty. 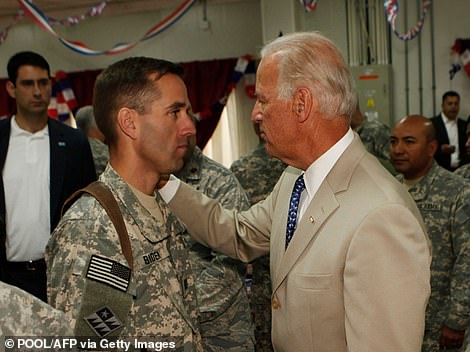 Biden pictured with son Beau in 2009 at Camp Victory on the outskirts of Baghdad. Beau died May 30, 2015 of brain cancer

President Biden also reminded the audience that he carries a card with him at all times with the ‘exact number of American troops’ who died in Afghanistan and Iraq over the last 20 years of war – 7,036 military members, he said.

During the 10-minute remarks, Biden said that the U.S. would continue fighting for human rights around the world, making reference to a two-hour call he had with Chinese President Xi Jinping about that exact American initiative.

The president also previewed his upcoming bilateral meeting with Russian President Vladimir Putin, which will take place at the G7 summit in the United Kingdom in June.

He said during the meeting he will ‘make it clear that we will not stand by and let him abuse those rights.’

Delaware Governor John Carney introduced Biden and praised him for coming to Delaware, his home state where he served as a senator for decades, for Memorial Day.

‘Little cold – somebody said, ‘normally on Memorial Day events, we don’t have coats and sweats on.’ I was just happy to be there without a mask on, to be honest with you,’ Carney said to laughter from an audience of about 100 people fathered under a tent to shield from the rain.

Biden’s grandson came to the service at the memorial, wearing a mask.

The president assured that Hunter had received one shot and would be getting the second soon, saying he was keeping on his face covering to ensure others’ safety. 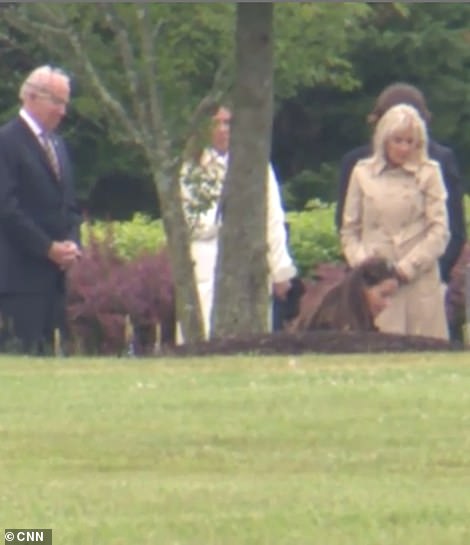 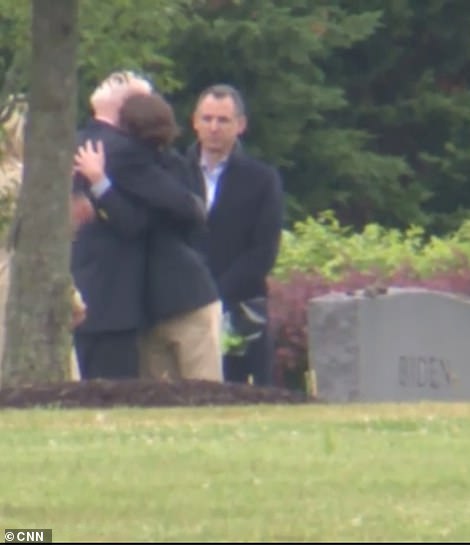 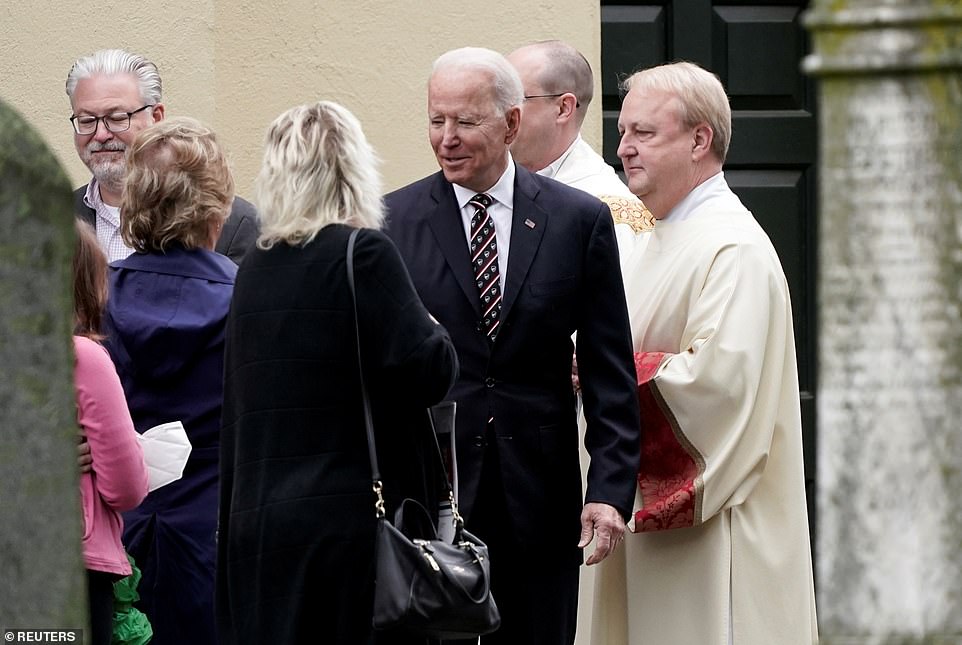 Biden attended early morning mass at St. Josephs on the Brandywine on Sunday 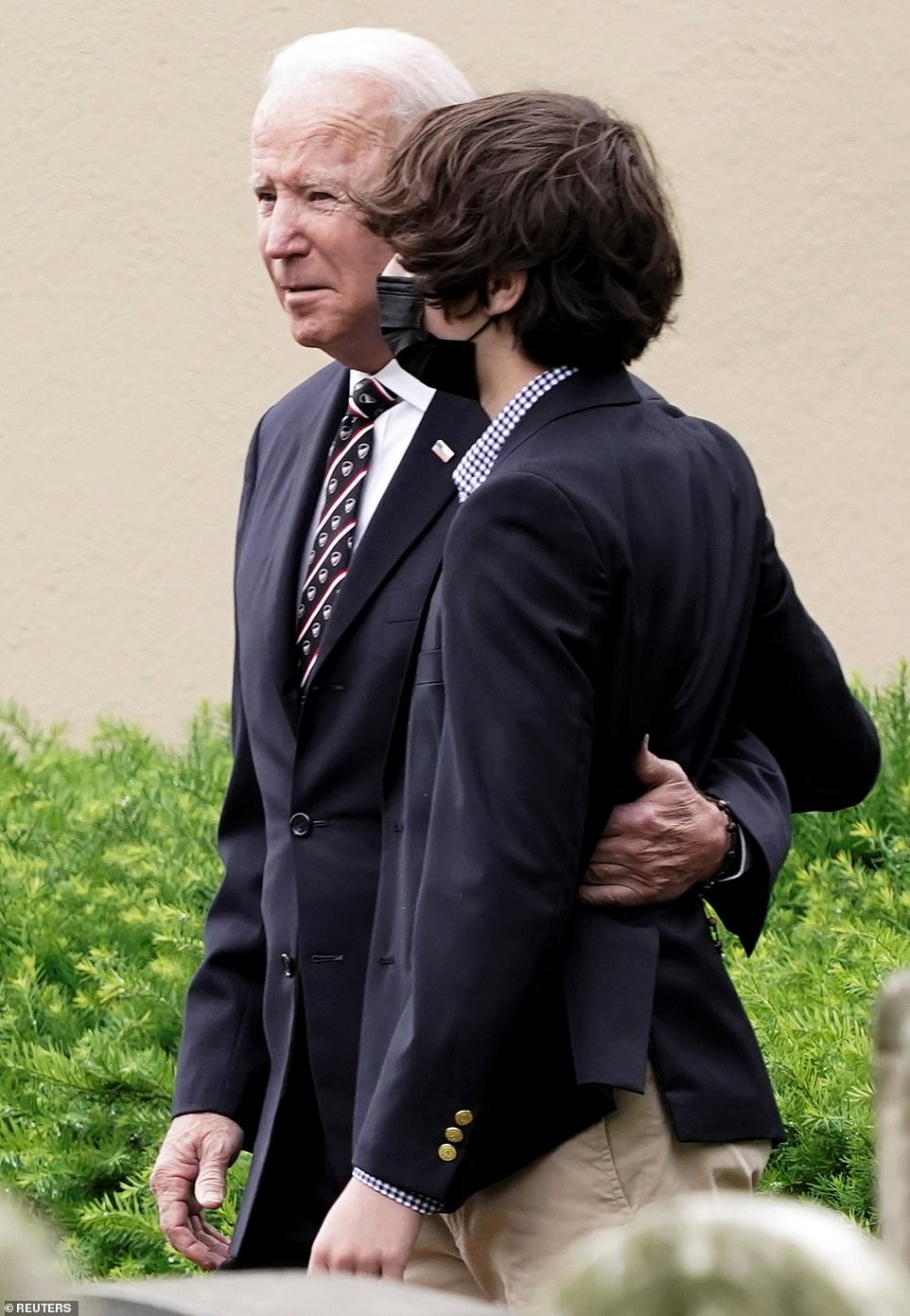 Following the service, the president walked arm-in-arm with Beau’s son Hunter as they went to visit his grave on the grounds of the church 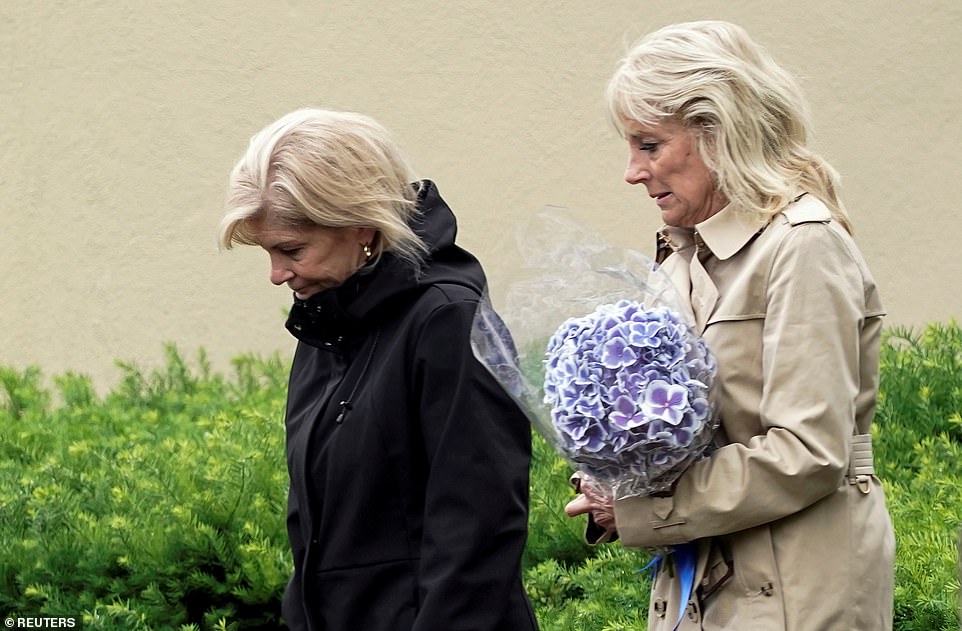 Earlier on Sunday morning, Biden went to the 7:30 a.m. mass service in Wilmington.

After the service, Biden, first lady Jill, their daughter Ashley and Beau’s son Hunter walked to Beau’s grave, which is located on the grounds of St. Joseph on the Brandywine.

Beau, who was attorney general of Delaware for eight years, died May 30, 2015 at the age of 46 from brain cancer.

Biden spends most of his weekends away from Washington, D.C. at his home in Wilmington, Delaware. The trip almost always includes Biden attending at least one church service.

After visiting Beau’s grave, Biden went to the Veterans Memorial Park in Wilmington where delivered remarks to commemorate Memorial Day. 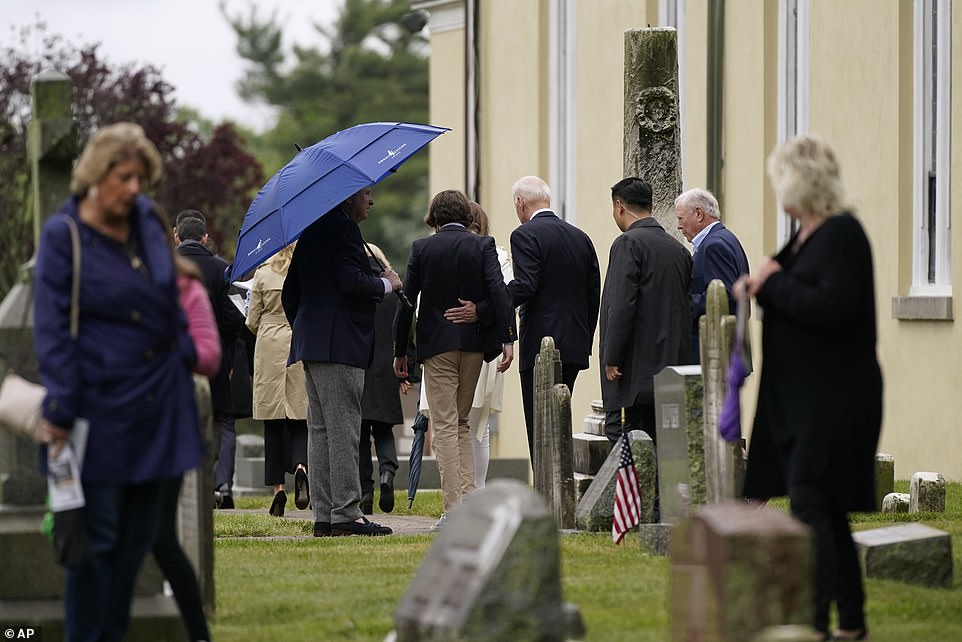 Biden and his family walk around St. Joseph on the Brandywine in Wilmington, Delaware to visit his son Beau’s grave near the rear of the church 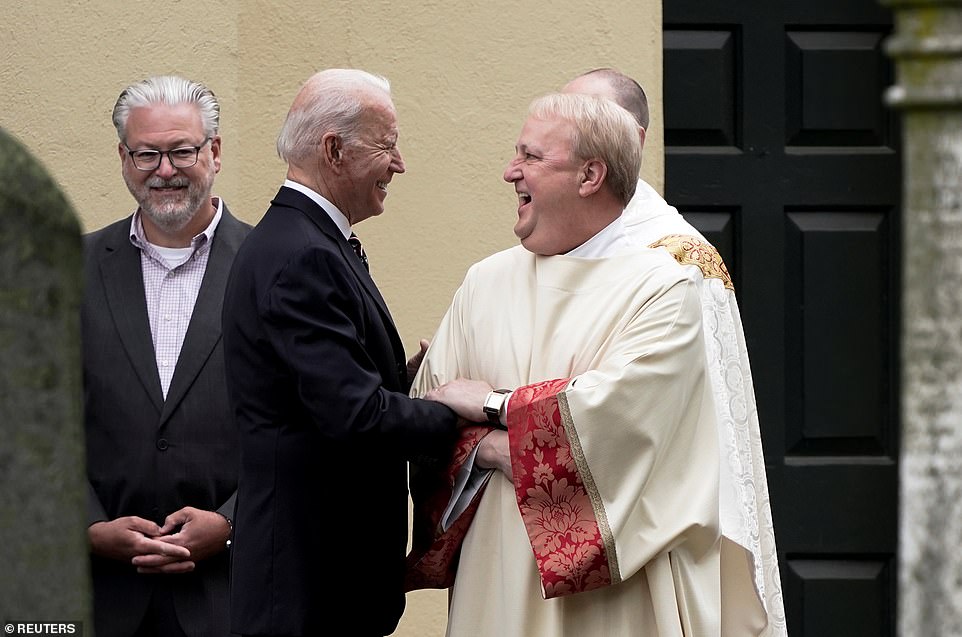 Biden shakes hands with a priest following the 7:30 a.m. service

Vice President Kamala Harris has faced intense backlash for her Memorial Day tweet on Saturday where she posted a candid image of herself and wrote: ‘Enjoy the long weekend.’

Critics were quick to point out that her tweet appeared self-serving and made no mention of the federal holiday observed on the last Monday of May honoring soldiers who died while serving in the military.

The tweet was slammed as ‘disgusting’ and ‘tone deaf.’

The post also came hours after she tweeted praising Midshipman Sydney Barber who made history as the first black woman to serve as Brigade Commander at the U.S. Naval Academy.

Harris also spoke at the U.S. Naval Academy’s graduation and commissioning ceremony on Friday during which she called the United States military ‘the best, the bravest, and the most brilliant.’ 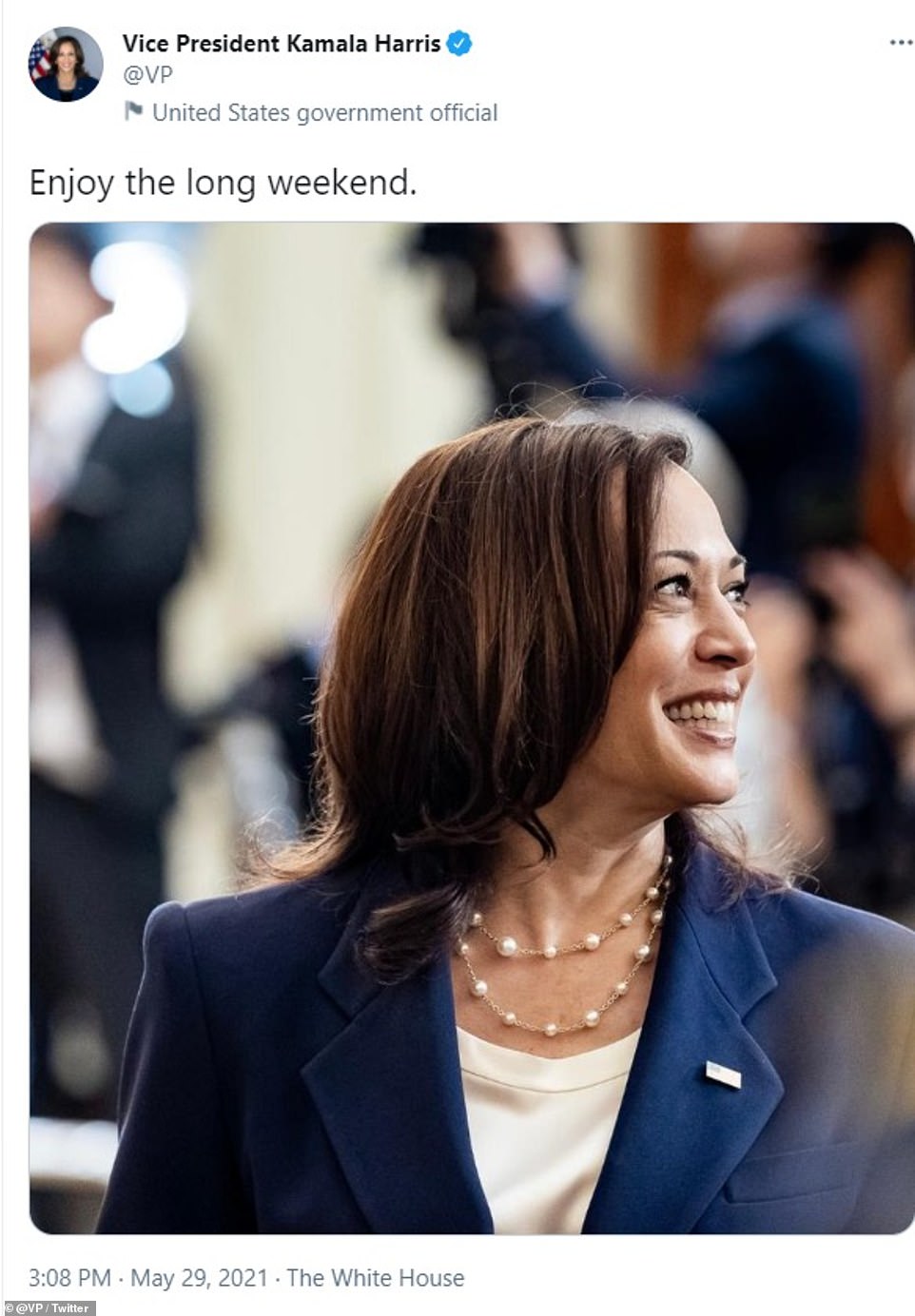 Vice President Kamala Harris was excoriated on Twitter for posting a candid photo of herself smiling with the caption: ‘Enjoy the long weekend’, without mentioning Memorial Day or that it’s purpose is to honor those who died while serving in the Military