President Joe Biden signed an executive order on Friday that will split some $7 billion of the Afghan central bank’s assets frozen in New York between humanitarian relief in Afghanistan and compensate victims of the Sept. 11, 2001, attacks.

The money will be split eveningly: $3.5 billion for the Afghan relief and the other $3.5 billion would remain in the United States to be used to fund ongoing litigation by U.S. victims of terrorism.

‘This is one step forward in the United States’ effort to authorize the transfer of a significant portion of the funds to meet the needs of the Afghan people,’ the White House said in announcing the order.

Biden will cite emergency powers as the justification for the order, which is highly unusual.

But it will help ease questions about what to do with the country’s money that is locked in the U.S. banking system after the Afghan government fell in August.

The funds for Afghanistan will ‘benefit the Afghan people,’ a senior administration official told reporters on a briefing call on Friday, adding that the U.S. is working with a series of international partners to set up a system to ensure that ‘no benefit goes directly to the to the Taliban.’

The official didn’t provide further details on how that would work.

‘There’s going to be appropriate controls in place over these funds to prevent diversion and illicit activity,’ the official said.

When Afghanistan’s government dissolved in August, it left behind about $7 billion on deposit at the Federal Reserve Bank in New York

Afghanistan faces a humanitarian crisis since the Taliban took over, with covid running rampant and people starving.

The remaining funds will be decided by the federal courts since some of the 9/11 families have writs of execution against the frozen assets.

‘No funds are going to be transferred until the court makes a ruling,’ the senior administration official said.

When Afghanistan’s government dissolved in August – and President Hamid Karzai fled the country – it left behind about $7 billion on deposit at the Federal Reserve Bank in New York.

The funds belonging to the Afghan central bank – known as Da Afghanistan Bank – includes assets like currency, bonds and gold.

Because it was unclear who could now access those funds, the Federal Reserve froze them.

The Taliban has sought to the money but so have a group of relatives of victims of the Sept. 11 attacks.

Afghanistan’s economy has been in a tailspin since the Taliban took over.  Nearly 80% of Afghanistan’s previous government’s budget came from the international community.

That money, now cut off, financed hospitals, schools, factories and government ministries. Desperation for such basic necessities has been further exacerbated by the COVID-19 pandemic as well as health care shortages, drought and malnutrition. 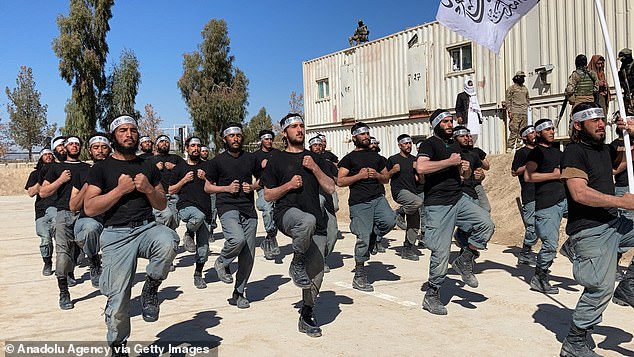 Afghanistan is facing a humantarian crisis since Taliban took over – the Taliban wants the $7 billion but U.S. won’t recognize its legitimacy 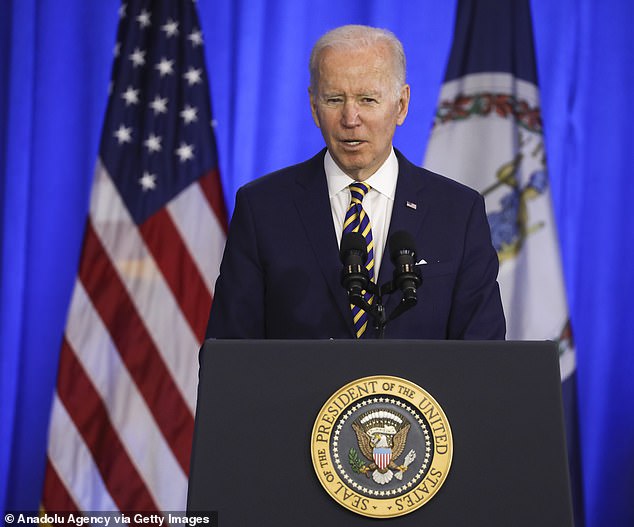 President Joe Biden’s executive order is highly unusual but will clarify what to do with the money, which has been locked in the U.S. banking system since Afghan’s government fell in August

The Taliban have called on the international community to release funds and help stave off a humanitarian disaster.

The Taliban are certain to oppose the split.

As of January the Taliban had managed to pay salaries of its ministries but was struggling to keep employees at work. They have promised to open schools for girls after the Afghan new year at the end of March, but humanitarian organizations are saying money is needed to pay teachers. Universities for women have reopened in several provinces with the Taliban saying the staggered opening will be completed by the end of February when all universities for women and men will open, a major concession to international demands.

It is highly unusual for the United States government to seize a foreign country’s assets on domestic soil.

But officials came up with a two-part legal process for Biden to use, The New York Times reported:

First, he would use emergency powers under a provision of the International Emergency Economic Powers Act to ‘direct and compel’ that a foreign country’s assets in the United States be moved to a segregated account. That locks them into the U.S. banking system but Afghanistan would still own the money.

Second, officials will use a provision of the Federal Reserve Act that permits disposing of property belonging to the central bank of a foreign nation – so long as it has the blessing of someone the secretary of state has recognized as being ‘the accredited representative’ of that foreign country.

It’s unclear what Afghan official was recognized or if that person will be name. The U.S. does not recognize the Taliban as the legitimate government of Afghanistan.

‘It’s been legally complicated road,’ the senior administration official said, adding that ‘hundreds of hours of legal work’ went into the order.

‘We feel comfortable, quite comfortable, that we have acted consistently and are acting consistently obviously with with U.S. law,’ the official noted. ‘This is an unprecedented situation we have $7 billion of of assets in the United States that are owned by a country where there’s no government that we recognize.’

‘We are acting responsibly to ensure that a portion of that money can be used to benefit the people of the country.’