She was reportedly arrested and imprisoned for driving offences in Marbella.

Yet Danniella Westbrook looked worlds away from any of her woes as she enjoyed a fun-filled sunbathing session with former Geordie Shore star Chantelle Connelly, during a girls’ holiday to Gran Canaria on Wednesday.

The 44-year-old former EastEnders star looked sensational in a skimpy orange bikini, as she headed out after confessing she is feeling ‘ugly and sad’ after her arrests.

Hot stuff! Danniella Westbrook looked worlds away from any of her woes as she enjoyed a fun-filled sunbathing session with former Geordie Shore star Chantelle Connelly, during a girls’ holiday to Gran Canaria

Keen to leave her woes behind her, Danniella stripped off for her relaxing poolside session with the stunning former reality star.

Showing off her svelte frame, she rocked a bold orange two-piece with a cleavage boosting cup and low-slung bottoms.

Prior to her beach trip, she wrote on Twitter: ‘The Lab salon Banus R doing a full on make over&pamper,I’m not allowed to see until it’s all done.

‘after a month of upset & feeling the ugliest I ever felt 2 say I’m overwhelmed is an understatement.So blessed 2 have amazing friends & the support I have #Blessed.’ 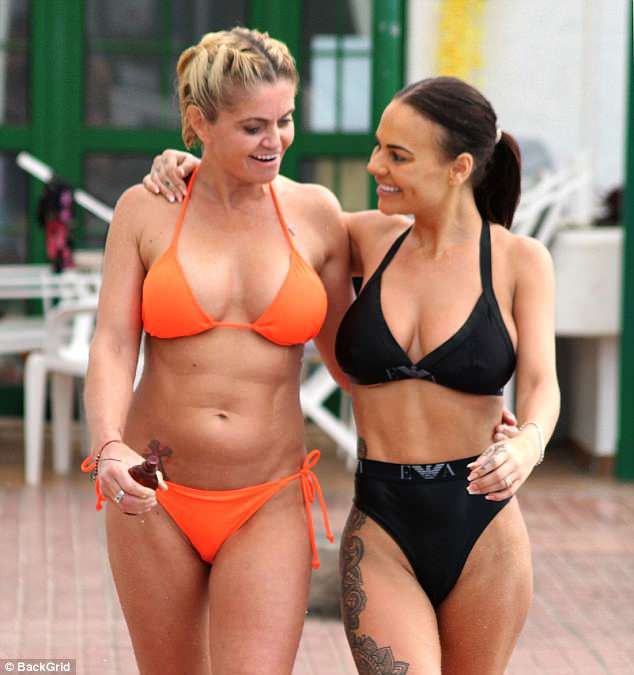 Stunners: The 44-year-old former EastEnders star looked sensational in a skimpy orange bikini while the reality star showed off her trim physique in a black bikini Making a splash: Wowing in their sexy bikinis, the unlikely pals looked friendlier than ever

Danniella is reportedly set to stand trial for fraud in Spain, in claims surfacing hours after she was arrested and jailed for driving offences.

On Tuesday, it was revealed she was hauled to court and spent a night in a Costa del Sol police cell when she was arrested over a warrant issued for the offences.

Spanish police confirmed a Brit had been held at Malaga Airport on an outstanding warrant and taken to court on Tuesday morning after a night in a cell.

Court officials said she had been informed she would have to stand trial in October for an alleged fraud offence before being released from custody.

No further information on exactly what she is alleged to have done wrong was made available, although a legal source described it as a ‘minor fraud offence.’ 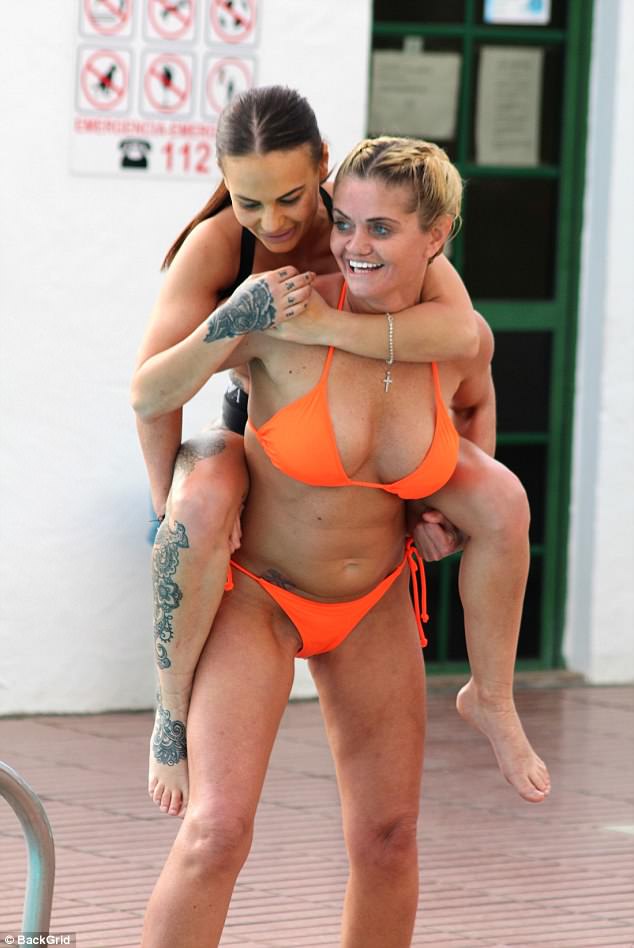 High jinx! The duo were playing around in the sunshine Happy days: Danniella was laughing away despite her recent confession that she feels ‘ugly’

The crime she faces trial for is ‘estafa’ in Spanish – which is defined in English as criminal deception, fraud or dishonest dealing. MailOnline has contacted Danniella’s representatives for comment.

Daniella was arrested under her married name of Jenkins. She is thought to have been held when her name flagged up on a police database at passport control as she went to board a flight back to the UK late on Monday night.

The star is now planning to travel back to the UK next week following her unexpected brush with the law. She is said to be staying with friends in the Marbella area. Legs eleven: Chantelle was displaying her inked-up legs as she strutted along with her pal 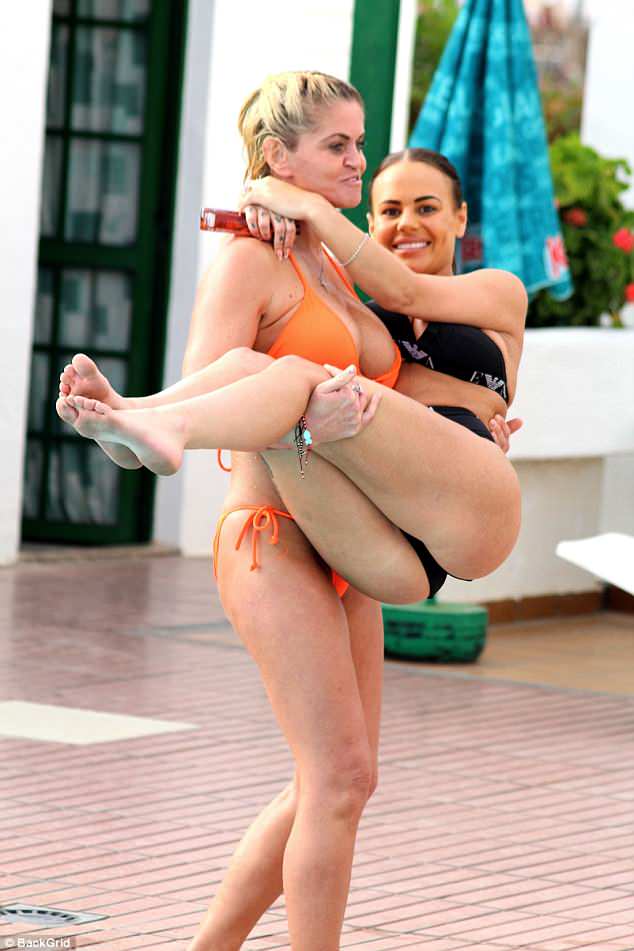 Larking around: The duo were frolicking away as they played around by the pool 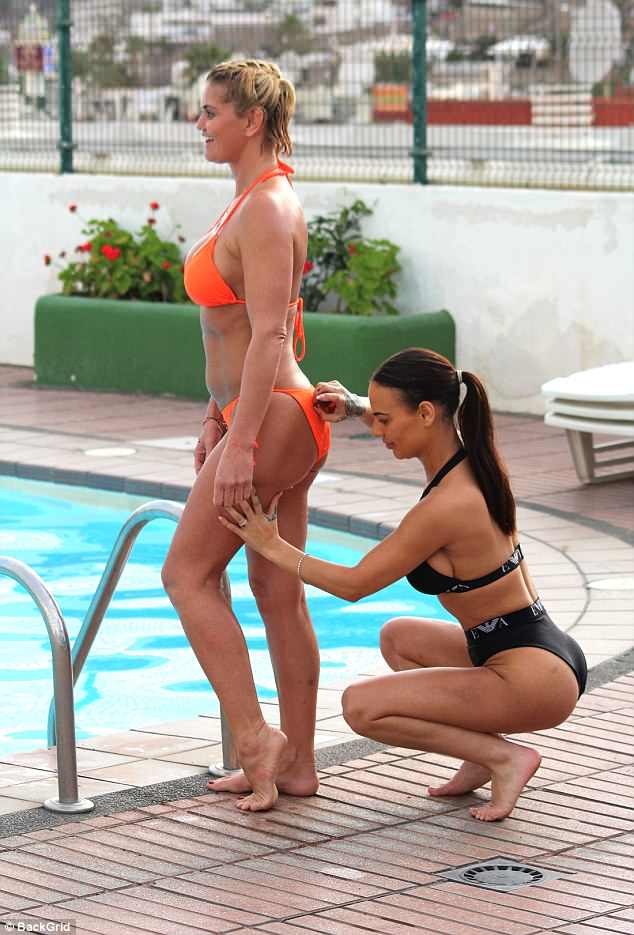 Helping her out: Chantelle paid close attention to ensuring Danniella did not catch a burn

Her arrest on Monday night came just days after she was arrested in the UK over allegations of ‘malicious communications and witness intimidation.’ Police in Britain confirmed she is still under investigation.

Her representatives said after the latest arrest: ‘We can confirm our client Miss Westbrook was arrested by national police at Malaga airport on Monday night and detained for 14 hours in custody before being bailed by the court in Malaga.

‘We cannot at this time disclose any more information other than that she has been left feeling very scared. She’s tired and looking forward to returning back to the UK next week.’ 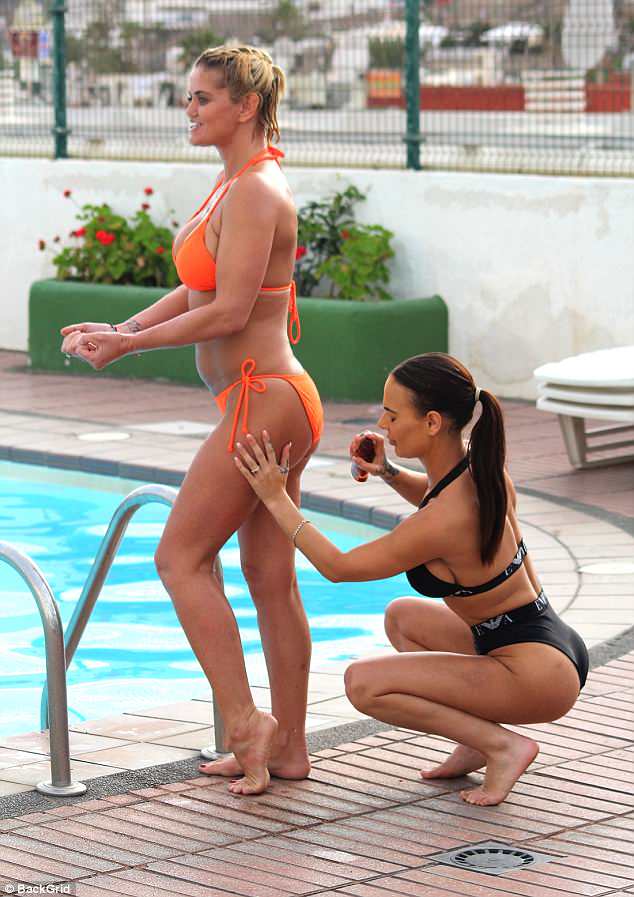 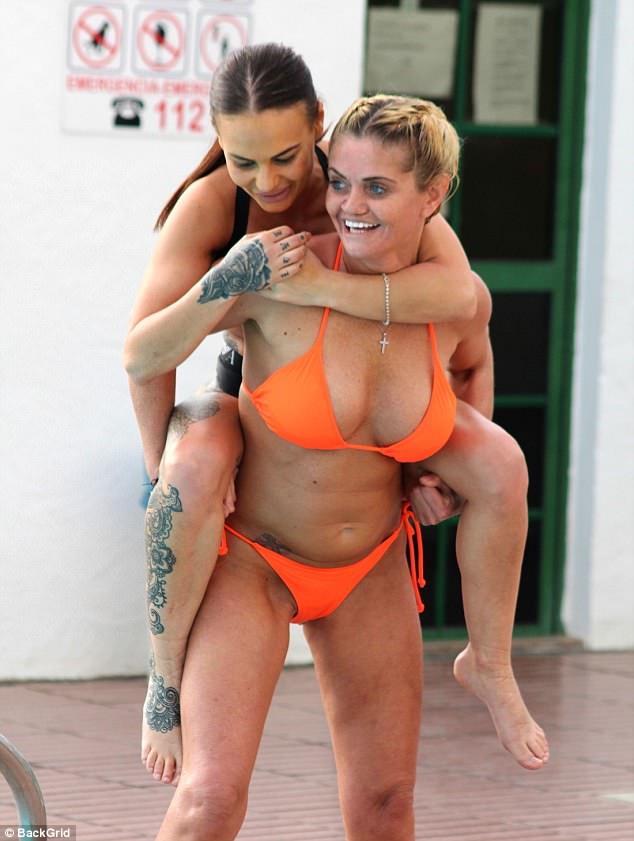 You got a friend in me! While showing off her figure, Danniella also showed off her strength as she scooped Chantelle on to her back 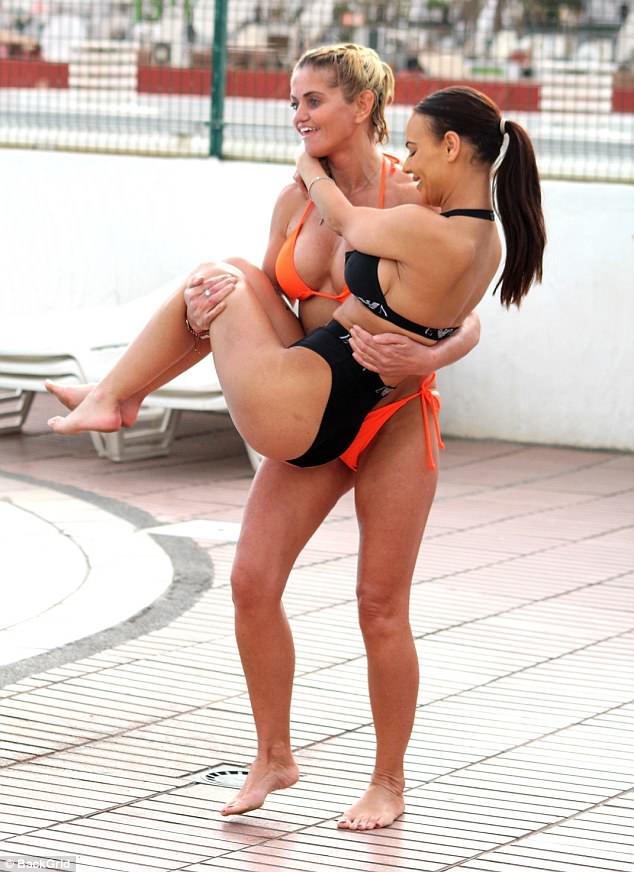 Hold me close! The playful pair were getting extremely close as they hit the pool