Bill Clinton asked Donald Trump to run against his wife for the presidency then bungled an attempt to end the investigation into her emails, a new book about her failed presidential campaign reveals.

In Chasing Hillary: Ten Years, Two Presidential Campaigns and One Intact Glass Ceiling, author and New York Times journalist Amy Chozick paints Bill Clinton as a liability who contributed to her loss against her Republican rival.

It claims that Bill ‘causally encouraged’ Trump to run less than a year before the 2016 presidential campaign began.

The two men were golfing together and Bill thought Trump’s candidacy ‘would roil the Republican field’.

Bill told Trump that the real estate mogul’s candidacy ‘would roil the Republican field’. Bill and Trump were long time golf buddies, with the ex-president and the future one president playing together with with Rudy Giuliani 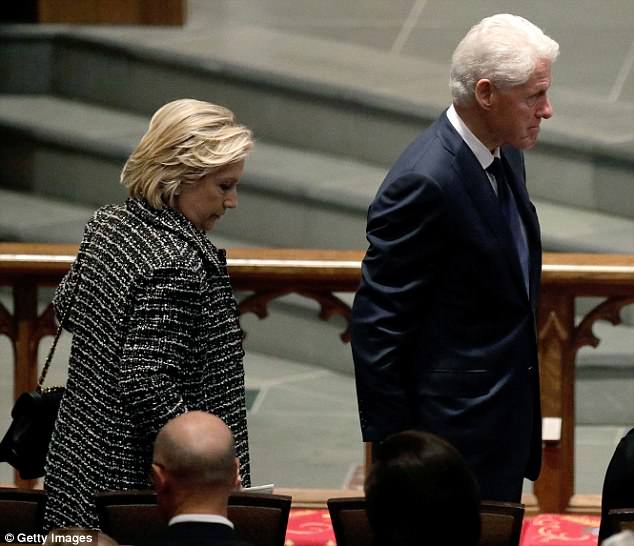 Toward the end of the presidential campaign, Hillary would look at Bill like a ‘mother trying to control a problem child’, Chozick writes. Bill and Hillary Clinton are pictured above at former first lady Barbara Bush’s funeral on Saturday

Bill’s meddling continued into the election campaign and Chozick claims that he was trying to subtly influence the FBI’s investigation into his wife’s emails when he met former Attorney General Loretta Lynch.

The book claims that their encounter in June 2016 on the tarmac at Phoenix Airport was a ‘mild charm offensive that he thought would help Hillary’.

Like Bill’s advice to Trump, it backfired spectacularly and led to more embarrassment for his wife.

Chozick covered Clinton for both her presidential campaigns and her gossipy memoir is full of salacious details about the failed Democratic candidate and her family.

Her gossipy memoir is full of details about the Hillary, but she is especially brutal about Bill.

Chozick recounted a trip she made with him and the Clinton Foundation to South Africa in 2012 with a group of his FOBs, or Friends of Bill.

Bill and his entourage were staying at the swanky Saxon Hotel in Johannesburg and Bill said that he felt guilty staying in such luxury after visiting poverty but ‘I get over it’.

According to Chozick she switched between feeling ‘blessed to be in this brilliant man’s presence – and total exhaustion from his self-absorption and driveling on’.

Chozick found that Bill ‘rambled on because of some internal hole’ he needed to fill.

Whenever Chozick raised the issue of Bill’s decision to invade Somalia in 1993 he went on a defensive monologue, prompting aides to tell her: ‘You got Black Hawked’, referring to the disastrous mission that led to the deaths of 18 US troops and UN soldiers.

Bill’s aides were even more cutting and behind his back they said: ‘He’s like Lady Gaga’.

At the end of the 2016 election campaign at a rally in Philadelphia Bill ‘looked at Hillary like she was the prom date he’d wooed all semester’, Chozick writes.

The book says: ‘He looked at her like she was the President. Hillary squeezed him back with a look not of adoration but of a mother trying to control a problem child.’ 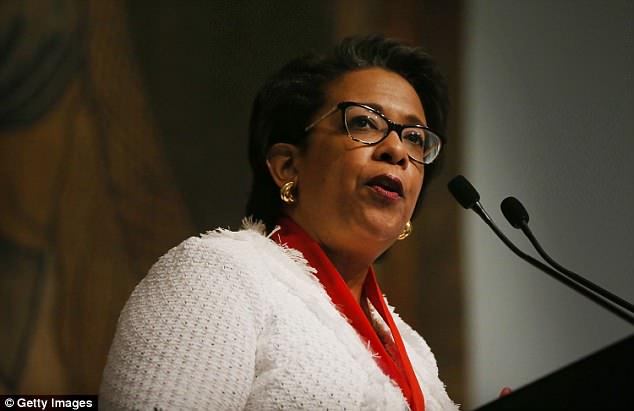 But as ever Bill ‘did what he always did, he made the biggest night in Hillary’s life about himself’.

To the waiting press Bill said: ‘It was interesting, You know, I sit on the board on the National Constitution Center…’

Bill has denied that he told Trump to run in a phone conversation in May 2015 even though the Washington Post reported that he told real estate mogul to ‘play a larger role in the Republican Party’.

Chozick says that Bill did actually did push Trump to run – but in person and months earlier when they were on the golf course together.

When Trump won the Republican nomination Bill saw the ‘genius’ in his economic populism and understood he was the perfect candidate for the 2016 election.

But Robby Mook, one of Hillary’s top campaign managers, hated Bill and saw him as a ‘relic’ and a ‘brilliant tactician of a bygone era’.

Behind his back Mook did an impersonation of Bill which went: ‘And let me tell you another thing about the white working class’ while wagging his finger.

Mook and his ‘mafia’ of aides arrogantly thought that Hillary could win with suburban woman, minorities and the young and that would be enough.

The way they saw it the white working class were ‘never coming back’ to the Democrats, the opposite of Bill’s view. 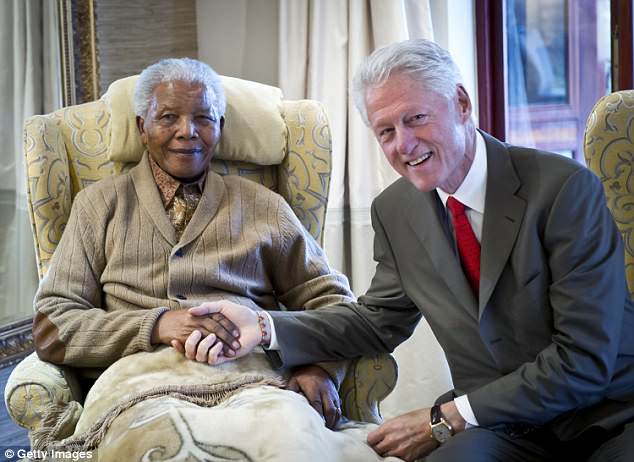 Also in the book, Chozick recounted a trip she made with him and the Clinton Foundation to South Africa in 2012 with a group of his FOBs, or Friends of Bill. Bill Clinton is pictured above during the trip with former South African President Nelson Mandela

It is likely to be the detail of the meeting between the former president and Lynch, when the two crossed paths in Phoenix airport in June 2016, which will be studied by the Trump administration.

Bill was reportedly taxiing for take off when a Secret Service agent told him Lynch was coming in for a landing, so he asked that they pull away.

The two were old friends but their relationship was complicated because Lynch, as Attorney General, was in charge of the inquiry into Hillary’s use of a private email server.

Despite this Bill went ahead with the meeting which he has consistently claimed was innocent; Chozick writes that this is not the case.

The book says: ‘FOBs told me he probably was trying to influence Lynch, not directly, but just a mild charm offensive that he thought would help Hillary’.

A source who knew Bill well told Chozick: ‘President Clinton is “irresponsible” like a fox.’

In a scathing analysis of the Clinton campaign, Chozick writes that Hillary’s advisers misjudged Trump so much that they thought that he would do the ‘heavy lifting’ of their campaign for them by making gaffes. 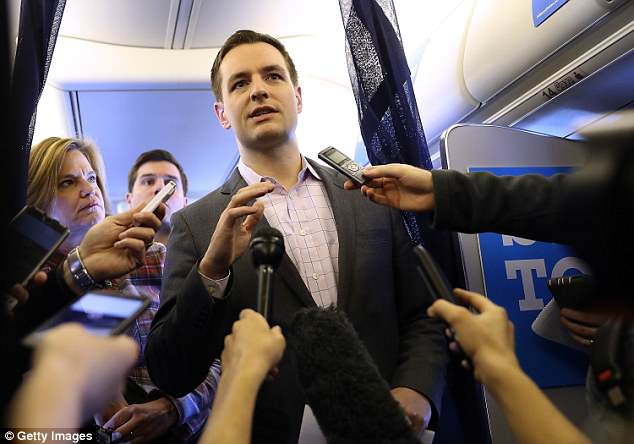 Robby Mook (pictured), one of Hillary’s top campaign managers, hated Bill and saw him as a ‘relic’ and a ‘brilliant tactician of a bygone era’, Chozick writes

Hillary’s close aide Huma Abedin was ‘raised by a pack of wolves’, writes Chozick in her Clinton book.

Chozick shines new light on the relationship between Clinton and Huma Abedin, one of her closest aides who has worked for her since 1996 and is treated like an adopted daughter. 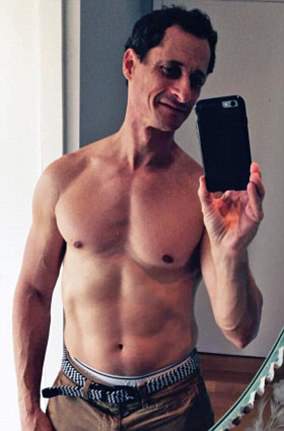 Why? Clinton aides thought that Huma Abedin put up Anthony Weiner because she had lived through the Clintons’ 90s scandals

Days before the election the FBI announced that it had found some of Clinton’s emails on Weiner’s laptop and they would be reopening his investigation into her personal email server.

Chozick writes that ‘no-one understood’ why Abedin stayed with Weiner for so long and that many of Clinton’s team thought that they had cost Clinton the election.

A close girlfriend of Clinton’s said that one explanation was that Abedin had been in Clinton world for so long that she had grown up amid the drama of her boss’ marriage problems in the 1990s.

The friend said: ‘You can’t blame her. She was raised by wolves.’

In the book Chozick writes that she marveled at Abedin ‘the way women tend to marvel at impossibly thin, fashionable women’.

But not everyone liked her and during the 2016 election she was mocked by Clinton’s top press aide Robby Mook.

During a meet and greet for the press at the Washington home of John Podesta, Clinton’s campaign manager, Mook introduced Abedin by saying she ‘does the schedule and, uh, a lot of other things’.

Chozick writes that Mook had ‘in an instant reduced to an afterthought the most important force (whose name wasn’t Clinton) on the campaign’.

Debbie Wasserman Schultz, then the chair of the Democratic National Committee, said: ‘I want Donald Trump to talk every single day for the rest of this election.’

The Clinton campaign adopted their own slogan for Hillary’s opponent: ‘Let Trump be Trump’, which ironically is what his supporters are saying of him now he is in the White House. 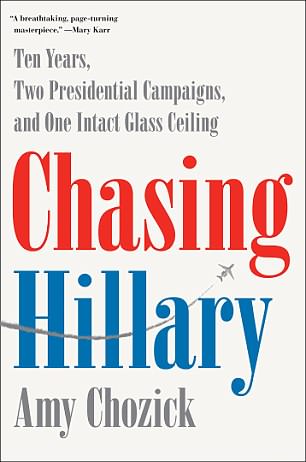 Hillary was just as dismissive of supporters of Bernie Sanders, the left wing candidate who challenged her to the Democratic primary.

Chozick writes that one person who talked to Hillary about her views on the Sanders crowds compared to the Trump crowds broke it down to her as: ‘At least white supremacists shaved’.

Hillary was so obsessed about getting her message that Chozick said that at a rally in Phoenix she saw one of her staffers tear up a hand painted ‘I heart Hillary’ sign she had drawn in crayon in art class.

Instead the staffer gave her a blue ‘Breaking Down Barriers’ sign with the campaign logo on it.

In August 2015 as the email scandal began to consumer her campaign Chozick notes that Hillary’s moods would swing very quickly.

She writes: ‘Even Hillary’s close girlfriends described her as mercurial. Each morning, aides would announce Hillary’s mood as if it were the weather. Crabby with a chance of outburst.’

Chasing Hillary by Amy Chozick is available on Amazon

Chozick also writes about Clinton’s refusal to distance herself from her faith adviser, who was repeatedly accused of sexually inappropriate behavior.

At a meeting in Iowa in September 2014 Chozick writes that the press were joined by Hillary’s faith adviser, a ‘blubbery histrionic man’ who Chozick calls Hands Across America (HAA). 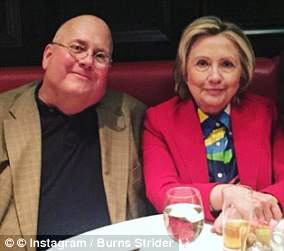 Creepy harasser Burns Strider (left) is nicknamed Hands Across America in the book. He was one of Hillary Clinton’s spiritual advisers

The reason is that he traveled across the country with the press corps and had been accused of sexual harassment against a female Clinton staffer in the past.

The staffer had claimed that HAA ‘planted a wet, unwanted kiss on her head’ but she was transferred to another department while HAA was allowed back into Clinton’s inner circle after a brief banishment.

Chozick describes HAA, who she does not name, as ‘creepy’ but ‘more pitiful and effeminate than threatening’.

Chozick says she tried to ignore him when he rubbed up and down her back at the launch of Clinton’s election campaign in Iowa in 2014.

Chozick writes that she once had a meeting in Washington with HHA he bragged: ‘Ay just luv my job. I get to be in a locked office with all y’all pretty, young girls’.

HAA also massaged her shoulder with one hand while holding a glass of whiskey with the other, making her feel uncomfortable.

While he’s unnamed in the book, HAA appears to refer to Burns Strider, a former Clinton campaign staffer who was responsible for religious outreach.

In January this year reports claimed that Clinton shielded him from an allegation that he sexually harassed a woman who worked for her 2008 campaign.

Clinton said that she regretted her actions and that she believed in second chances ‘but sometimes they’re squandered’.