Calling the Trump regime ‘inept’ cost our man in Washington his job – but such blunt assessments are nothing new. 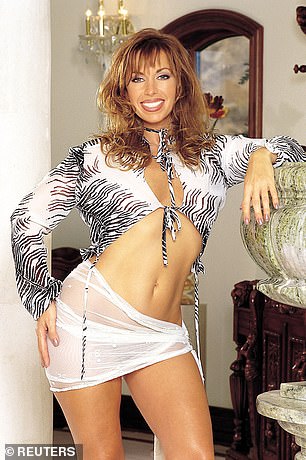 Bill Clinton (left) was accused of sexually harassing Paula Jones (right), a former civil servant, when he was Arkansas Governor 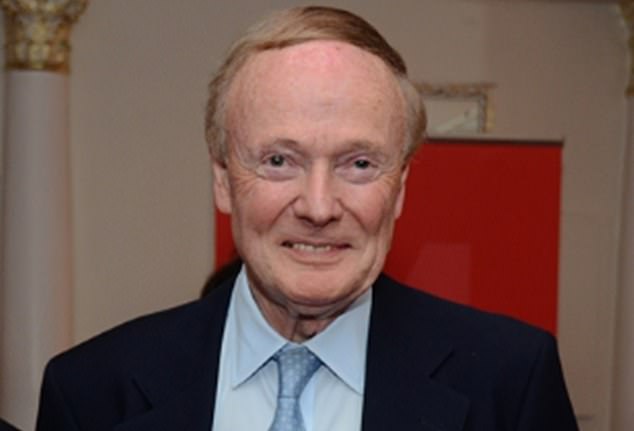 Sir Robin Renwick wrote in 1994: ‘The personal stories may have taken their toll on Clinton’s popularity. No one believes the full Paula Jones story but the thought that the president may have to testify in court against her gives the White House fits’

The memo noted sexual harassment claims by Paula Jones, a former civil servant, who said Mr Clinton exposed himself to her in a hotel room when he was the governor of Arkansas.

Bill Clinton got the cold shoulder from Boris Yeltsin after he left the Russian president waiting on the phone for an hour and a half.

Mr Yeltsin eventually hung up and refused to take calls from the White House for days afterwards.

The incident was detailed in a note for Sir John Major from his private secretary Alex Allan, who said Mr Yeltsin was ‘very p***** off’. He wrote: ‘Apparently the Russians misunderstood… the preliminary soundings the US operations room do and put Yeltsin on the line. Panic at the US end.’

Writing ahead of a 1994 visit to the UK by Mr Clinton and wife Hillary, Sir Robin wrote: ‘The personal stories may have taken their toll on Clinton’s popularity. No one believes the full Paula Jones story but the thought that the president may have to testify in court against her gives the White House fits.’

The file, dated May 1994 and sent to the Foreign Office, added: ‘White House organisation remains chaotic. Clinton continues to have difficulty winning the approval of more than 50 per cent of the American people and that could be constant throughout his presidency.’ He noted Mr Clinton was ‘concerned’ about his treatment by the British media, adding his White House had an ‘excessive preoccupation’ with the Press.

In another echo of the recent Trump storm, John Major was dragged into a major row when another senior diplomat criticised his host country’s regime.

David Gladstone, high commissioner to Sri Lanka, became ‘persona non grata’ and had to end his service after officials complained of his conduct at a local elections count in May 1991. Sir John gave him his full backing.

Major: I’m ‘sick and tired’ of the EU

He has become one of the most vocal opponents of Brexit.

But during his time in Downing Street, John Major fumed he was ‘sick and tired’ of EU rules.

After being handed a summary of EU issues by one of his policy chiefs in April 1995, Sir John furiously scribbled: ‘Oh god. It goes on and on. I am getting pretty sick of all this.’ 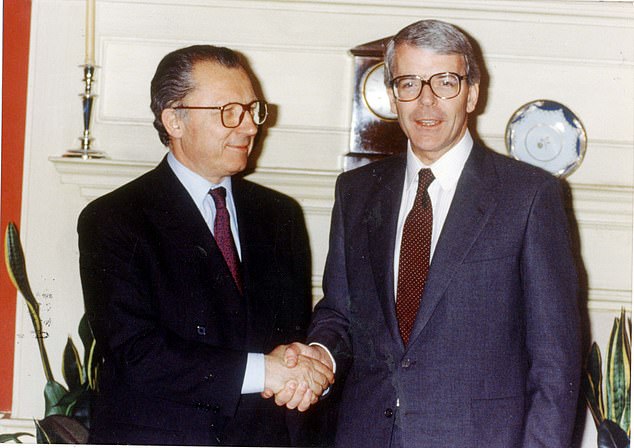 In a similar document from several months earlier, the Cabinet Office’s European secretariat consolidated issues of interest to France, which held the EU’s rotating presidency at the time. It detailed how Paris was keen to use a crisis in Algeria to drum up financial support for the Mediterranean region from EU countries including the UK.

‘Plenty of problems here,’ Sir John said in a handwritten note. ‘Why not block help for the Med if they impose?’ He added: ‘I’m sick and tired of playing by the rules.’

When presented with a paper setting out prominent EU matters in December 1995, Sir John simply wrote ‘bad’ beside a section on extending the remit of the European Court of Justice.

While other files show his approach to be predominantly pro-EU, Sir John’s criticisms shine a light on his private frustrations while he was trying to lead a Tory party bitterly divided over Europe.

Those divisions boiled over in 1993, when the Tory leader called three eurosceptic ministers ‘bastards’. The comment, accidentally recorded after a television interview, is thought to have been directed at Michael Howard, Peter Lilley and Michael Portillo.

At the forefront of his frustrations with Brussels was the bloc’s final push to replace the UK’s imperial measures with the metric system in 1995. 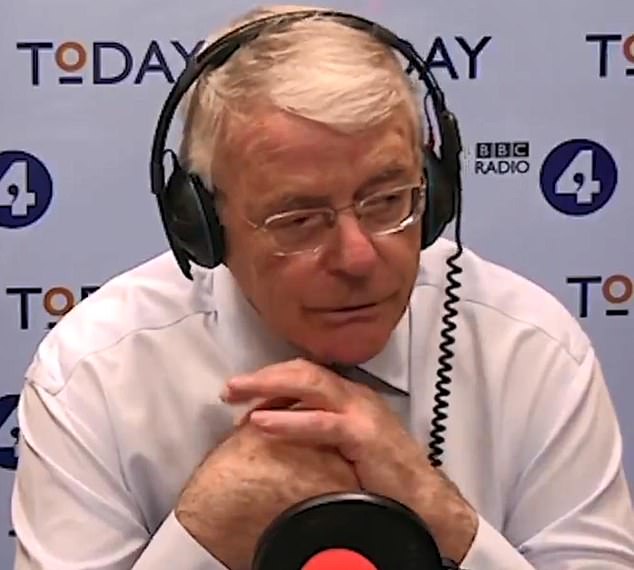 Sir John said in 1995 that he was ‘sick and tired’ of European Union regulations. He is now a vocal remainer

Sir John raged at his officials when he was faced with a barrage of criticism and concern from the public over fears that distinctively British measures such as the pint could be eradicated.

He was presented with a government document suggesting that a British stall holder could be fined up to £500 after the year 2000 for shouting ‘Lovely tomatoes – 70p a pound’.

Annotating the paper by Norman Blackwell, head of his policy unit, Sir John wrote: ‘Dear God!!’ Elsewhere in the document, released by the National Archives in Kew, West London, he noted: ‘Heaven help us! What a mess.’

He also wrote that there should be ‘no prosecutions’ under the full introduction of the metric system.

In a letter to the president of the Board of Trade, he said: ‘This directive should not be enabled to confuse the elderly, irritate the population and damage the government.’

He added: ‘This is a potential disaster area. This issue has the potential to cause real trouble.’

Sir John stated that the general thrust of metrication, which had largely been implemented in the UK on a voluntary basis, was ‘clearly sensible’.

However, he added: ‘We must make it clear that we do not anticipate domestic prosecutions through over-legalistic interpretations devoid of common sense.’

The metric system was fully implemented across the EU in 1995 but exemptions were allowed to appease the UK – such as the use of miles on road signs. Europe abandoned any threat to force the UK into a full metrication in 2007. The National Archives files reveal how Sir John’s woes over metrication were foreseen by Margaret Thatcher in her later years in power.

In a handwritten note in December 1987 on a letter to Sir Geoffrey Howe, then the foreign secretary, she wrote: ‘We can’t phase out imperial units – there would be an enormous row. Media and Parliament would be united against a change.’

In fact, metrication began in Britain with the creation of the Metrication Board in 1969 – four years before the country joined what was then known as the Common Market.

Churchill told: Let’s knock down No 10

Winston Churchill was told Downing Street was in such disrepair that it should be demolished. 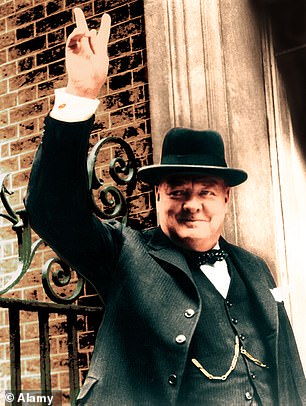 Files show Sir Winston was warned in 1954 that rotting timber and an infestation of wood-boring beetles were causing havoc at No 10, the Chancellor’s home at No 11, and No 12.

The front entrance to No 10 was among the areas particularly affected. Minister of works Nigel Birch wrote to the Cabinet in 1955: ‘It would be more straightforward to pull down all the houses and put up modern buildings… but to destroy them would be an act of impiety.’ Told that renovation work would take up to three years, Sir Winston said: ‘The Ark did not take so long to build.’ He backed further investigations to gauge what work was needed at No 12 ‘so long as you do not make noise at inconvenient times’.

The project dragged on for years with the estimated £300,000 cost spiralling to £464,000 when work began in 1960 under Harold Macmillan, amid warnings of ‘major damage or collapse’. The work was finally completed in 1963.

While most of Britain was revelling in the Swinging Sixties, the Government was planning for World War Three.

Ministers desperately tried to hide the existence of a giant Cold War bunker where the political elite would flee in the event of a nuclear attack, files reveal. In documents marked ‘top secret’, a cabal of ministers and civil servants detailed plans to bamboozle the public and Press about the real purpose of the 34-acre site codenamed ‘Turnstile’.

The subterranean fortress near Corsham, Wiltshire, was completed just before the Cuban missile crisis in 1962. It was to be the base from which the UK would execute retaliatory strikes if it was hit by a nuclear attack. 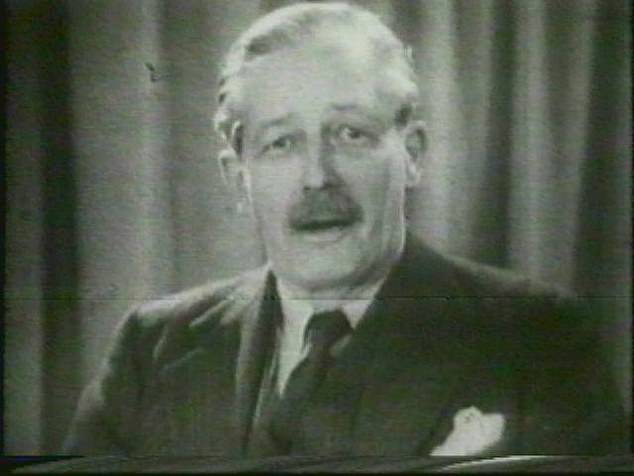 Under Harold McMillan (pictured), a nuclear bunker near Corsham, Wiltshire, was completed just before the Cuban missile crisis in 1962. It was made for the political elite in case of a nuclear attack

Encased in concrete, it would house the country’s politicians, military chiefs and as many as 4,000 civil servants for up to three months. Despite years of subterfuge, officials believed its cover was about to be blown in March 1967, when protesters linked to the Campaign for Nuclear Disarmament allegedly learned of it.

A newly-released 1967 Cabinet Office file warned: ‘There is some reason to believe that the organisers may suspect both the exact location and the true purpose of Turnstile.’ 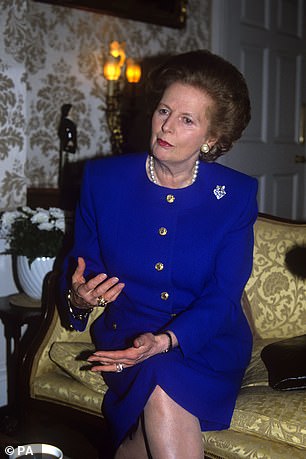 Officials dreamed up a cover story that described the facility as a base for ‘emergency facilities and public utilities’ in case of war. As part of the plan, which was circulated to just 35 people, ministers and officials called for a minimal police presence guarding the property so as not to arouse suspicion. Officials were also instructed to ‘brush off’ questions from journalists about the real nature of the project. One document read: ‘Every endeavour should be made to limit and discourage Press publication and speculation.’

Officials were told to ‘play down the importance’ of the site if asked about it. If suspicions were aroused, they could point the Press to the existence of a D-notice – an arrangement between the Government and media that prevents publication on security grounds.

In follow-up documents, the authors approvingly noted how the protests at the site were small and that media interest had been allayed.

In 1989 Margaret Thatcher declined to approve a £40million refit, believing the site redundant. It was used as an RAF communications centre until 1992 and decommissioned in 2004.

Manchester’s bid to host the 2000 Olympics failed because ‘no one in their right mind’ would want to go there instead of Sydney, officials wrote.

A review of the bid in February 1994 also found Britain had been ‘arrogant’ and relied on ‘nice old buffers’ to run the campaign.

Damian Green, then part of Downing Street’s policy unit and later deputy prime minister under Theresa May, wrote that the reason for the failure was ‘obvious’, adding: ‘No one in their right mind would spend three weeks in Manchester rather than Sydney. It is hard to imagine Manchester ever being successful.’ 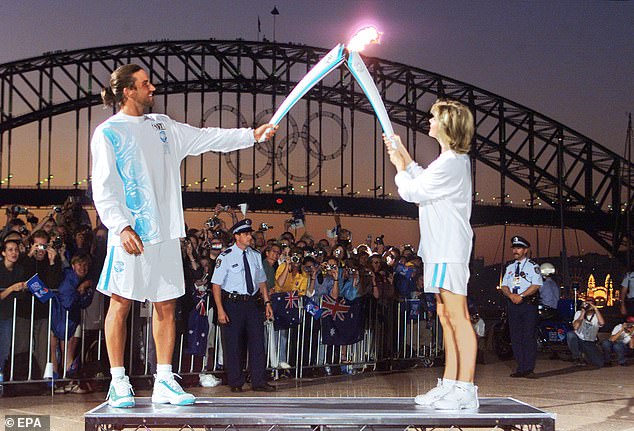 Damian Green, then part of Downing Street’s policy unit and later deputy prime minister under Theresa May, wrote: ‘No one in their right mind would spend three weeks in Manchester rather than Sydney’

Downing Street aide Alex Allan wrote to then prime minister John Major: ‘We have had too many nice old buffers running things or representing Britain on international sporting bodies.

‘We have also adopted rather an arrogant attitude, based either on past glories or a belief that many of those now running international sporting bodies are corrupt and/or power-mad,’ he added. ‘Some probably are – but we didn’t win any friends by saying so.’

The newly-released files also contained a speech prepared for the prime minister if Manchester won the bid. In it, Sir John would have declared proudly: ‘We went for gold and got it.’