Bill Cosby’s wife Camille has NEVER visited him in prison, his only visitor reveals

Bill Cosby has not seen his wife Camille since last September when he began his prison sentence for drugging and sexually assaulting Andrea Constand in his home near Philadelphia in 2004, DailyMailTV can reveal.

But he has received private messages of support from celebrities including Quincy Jones and Spike Lee, who sent his love to the couple just last week.

These are just some of the revelations made today by Cosby’s spokesperson, confidante and sole prison visitor, Andrew Wyatt, as the entertainer’s legal team prepares to file their appeal against his conviction on Wednesday.

Speaking exclusively to DailyMailTV Wyatt described Cosby as a man who continues to protest his innocence, who has adapted ‘amazingly’ to life in what he calls ‘the iron box’ and who is confident that he will be ‘vindicated.’

Disgraced comedian Bill Cosby’s wife Camille, 75, has not visited him in prison since he began his sentence in September, DailyMailTV can reveal. He is pictured arriving to court with his wife of 55 years in April 2018 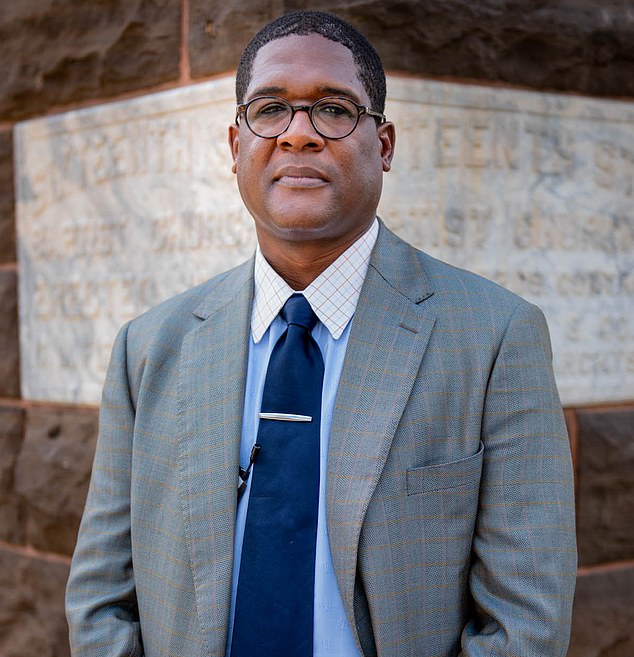 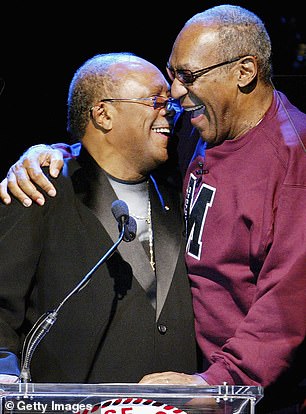 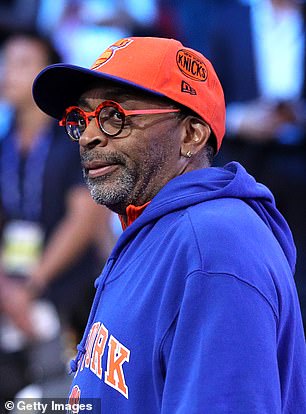 Cosby’s first trial ended with a mistrial in June 2017 when the jury declared themselves ‘hopelessly deadlocked’ and unable to reach the unanimous decision necessary under Pennsylvania law. 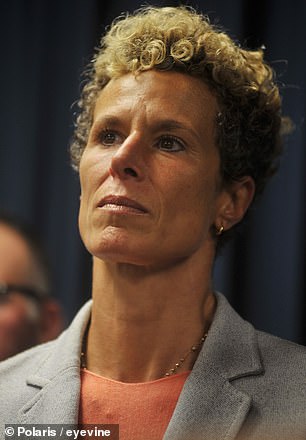 Cosby is serving a three-to-10-year sentence after being found guilty of drugging and sexually assaulting Andrea Constand, pictured during his sentencing in September

But the jury at his second trial in April 2018 had no such trouble. The 81-year-old entertainer had been allowed to remain at home and under house arrest while awaiting his sentencing in September.

Now, Wyatt has told of how Cosby drove to that hearing absolutely certain he was going to be put away and determined that he would not see Camille, 75, his wife of 55 years again until he walked out of prison, a free man.

Cosby and Camille share three children – Erika, 53, Erinn, 52, and Evin, 42, none of whom have visited their father.

Wyatt said that Cosby told him: ”I have prepared myself mentally and physically to go into the iron box and I am ready to go.

”This judge is not going to sentence me to probation or some form of house arrest. He has to win by putting me in the iron box.”’

According to Wyatt, Mr. Cosby has made it clear that he does not want any family members to visit him.

He said, ‘He feels that when he left home, he left home the day of the sentencing as Bill Cosby, not as NN7687, the number they have given him and he wants his family to see him in that light not in the light of a prison uniform.’

Cosby is prepared to be there for the long haul should his appeal fail to secure him a third trial.

A condition of his eligibility for parole after three years is that he attends Violent Sexual Predator rehabilitation classes.

Wyatt revealed, ‘Mr. Cosby has made it very clear that he is innocent of what he’s been charged and convicted with. He feels that this is how they get inmates to confess to a crime they did not commit because they force them to go to these sorts of classes.

‘The minute you set foot in a sexual predator class you’re a demon; you’re guilty of that crime.

‘So we understand the stipulations and he understands that he can get out after three years if he attends. He’s 81-year-old, he’s 82 on July 12. But he’s willing to sit there the entire ten years rather than attend that course.’

Instead Cosby is filling his time behind bars with what Wyatt referred to as ‘speaking engagement’s,’ giving up to 15 talks a month to groups of fellow inmates under the banner of, ‘Man Up.’

Wyatt explained, ‘There are various different groups and communities within the prison looking to help men with drug and alcohol issues for example and inmates who are coming up for release.

‘Mr. Cosby is educating these men on how to remove the ‘d-i-s’ from disadvantage and recognize that they have a second chance when they get parole, they get to be better fathers, great community activists.’ 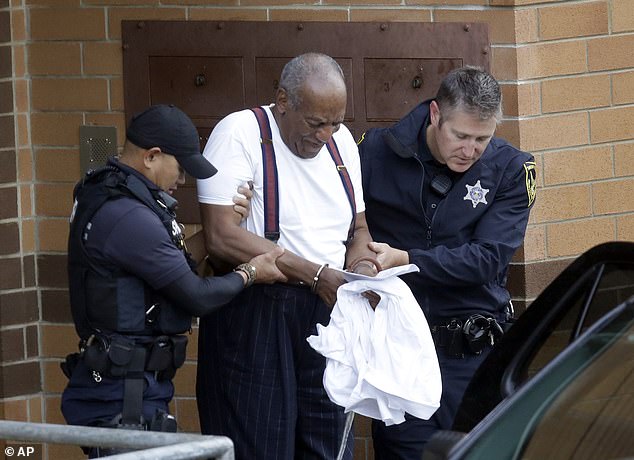 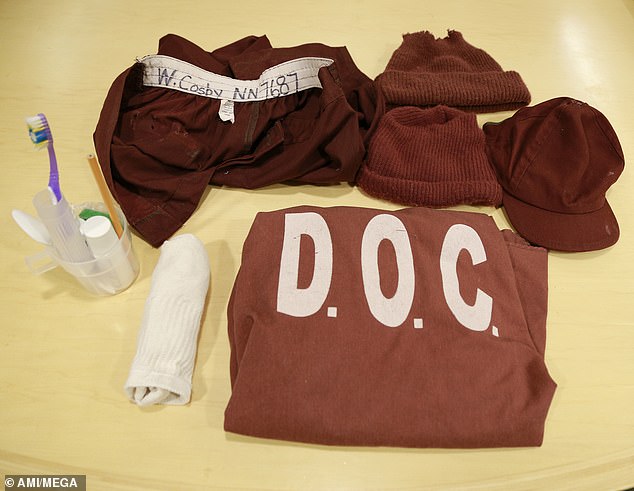 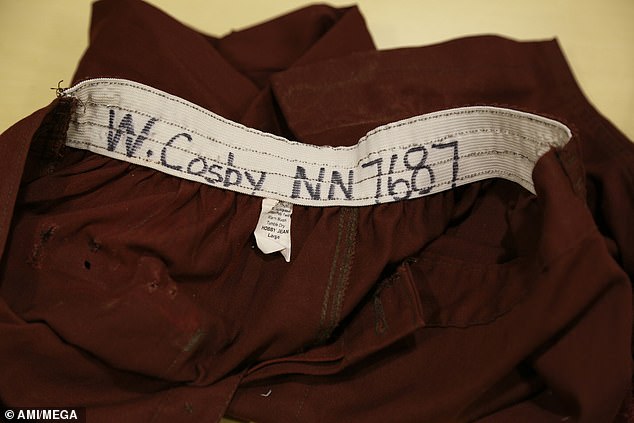 DailyMailTV obtained exclusive photos of Cosby’s prison garb, which is a far cry from the expensive sweaters he normally wore on the outside

According to Wyatt, Cosby views his incarceration as having given him a purpose – or more specifically an audience that he had been trying to reach on the outside.

Wyatt explained, ‘The same people he wanted to reach on the outside. They’re right here.’

Cosby was famously lambasted by media and black community leaders for his so-called ‘Pound cake Speech,’ delivered in 2004 during a National Association for the Advancement of Colored People (NAACP) awards ceremony in Washington, DC in which he was highly critical of various parts of the black community and contemporary culture.

Wyatt said, ‘He said, ”When I did the pound cake speech I was ridiculed by media and various people in the black community for airing black people’s dirty laundry in public.” And he said, ”We all have the same dirty laundry in prison.”’

Officially blind and unable to set down his speeches in writing, Cosby ‘writes’ all his speeches in his head as a way of remaining mentally sharp. According to Wyatt he refers to prison as ‘a pesticide for dementia.’

Cosby had asked prison authorities to allow him to learn Braille so he could read but the request was refused, his spokesman said, because it requires the use of a small pen, which could be used as a weapon.

Cosby has two prisoners assigned to help him navigate the prison and was moved into the general population at the end of January.

He receives hundreds of letters, which he cannot read and are simply boxed up and forwarded onto his office in California. And money that is donated to him is sent to charity on his behalf.

He is, his spokesman said, channeling his experience of being in the navy for four years when it comes to mentally adapting to a life of rules, hours and limitations.

He said, ‘He views it like you’re going to war and you’re not going to see your friends and family. You have to abide by the rules.’ 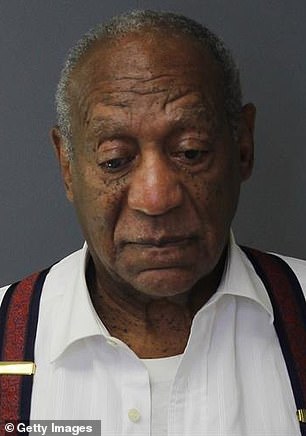 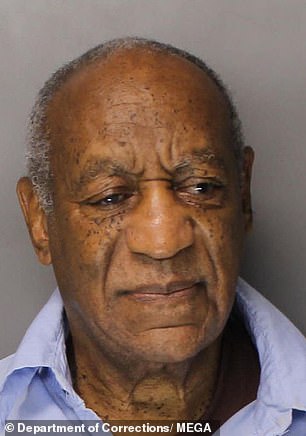 Cosby, pictured here in two mug shots, has emphatically denied all sexual assault claims made against it

Cosby is housed in Pennsylvania’s new maximum-security state prison SCI Phoenix, which was built to replace the aging SCI Graterford. 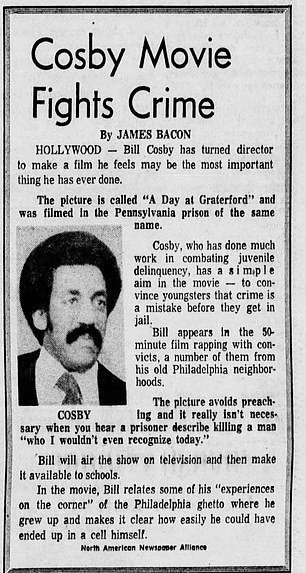 In a bizarre twist, Wyatt told how Cosby had filmed a documentary, A Day in Graterford, in the 1970s in a bid to dissuade youngsters from a life of crime.

A report at the time stated that Cosby viewed it as ‘the most important thing he has ever done,’ and showed Cosby relating to prisoners and sharing some of his own experiences of growing up in poverty in the Philadelphia projects.

It noted, ‘He makes it clear how easily he could have ended up in a cell himself.’

Four decades later Cosby is insistent that he has ended up in a cell as an innocent man.

Wyatt admitted that when he received news that a criminal case was to be brought against Cosby he called him and said, ‘Hey, I just need to know is this true? And he said to me, ‘Andrew. I will not take you through the valley of shame.’

He and his wife Camille claim they are the victim of a racist conspiracy and, in conversations with Wyatt, Cosby has compared his own incarceration to that of Neslon Mandela – whom he met following the murder of his son Ennis in 1997.

In a statement delivered after her husband’s sentencing Camille, a devout Catholic, claimed that Cosby had been depicted as ‘the brutal black buck,’ and was paying the price for sleeping with white women.

Many of Cosby’s accusers were black including one of the five who took the stand during the second trial as ‘prior bad acts’ witnesses.

The admission of these witnesses is one of the key pillars on which Cosby’s team will lodge their appeal.

Testimony relating to prior alleged crimes is only allowed in Pennsylvania if it demonstrates a signature pattern of abuse. But its inclusion is rare and Judge Steven T. O’Neill did not explain why he allowed five women to testify in the second Cosby trial after allowing just one to do so at Cosby’s first trial in 2017. 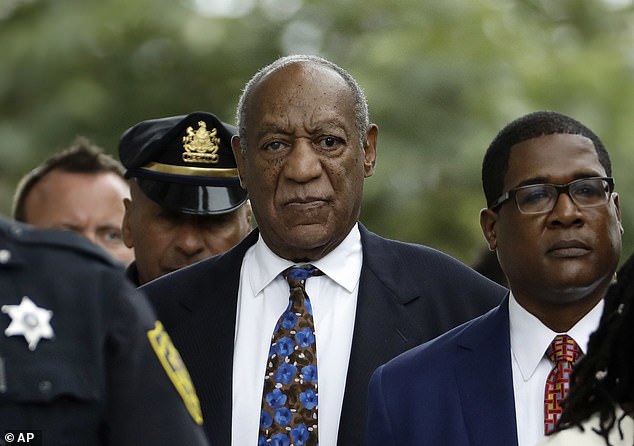 Cosby is filling his time behind bars with ‘speaking engagement’s’, Wyatt said, giving up to 15 talks a month to groups of fellow inmates. Wyatt and Cosby are pictured together in September after his sentencing hearing

Cosby’s new lawyers, Brian Perry and Kristen Weisenberger, will argue that these women should not have been allowed to testify.

They will also state that the depositions given by Cosby in 2005 and 2006 during a civil suit brought by Constand should not have been allowed as evidence. They state that Cosby gave the deposition on the promise of previous Montgomery County District Attorney Brian Castor not to pursue any criminal prosecution.

They will also claim that the statute of limitations on the assault alleged by Constand had run down.

According to Wyatt Cosby is ‘optimistic’ that the Supreme Court will grant him a new trial. But prepared to serve out his time if they don’t.

Wyatt said, ‘Mrs Cosby stands behind him to support him in all his decisions. We don’t think about the negative. We only focus on the positive and we look at the reality of the situation.’

‘He says, ”I can’t wait to go home because I’m going to put on my suits and have a cappuccino. I’m going to do a wardrobe change for breakfast, lunch and dinner and just sit in my suits.”’

Should he be ‘vindicated’ he plans to spend three to six months at home before going on tour with the new show he is writing while in prison. He is, Wyatt said, ‘being more creative than ever.’

He added, ‘Mark my words, Mr. Cosby is far from finished.’