Bill and Melinda Gates’ daughter Jennifer has opened up about what it was like to grow up with her billionaire parents, recalling how the philanthropists would discuss children’s mortality and the HIV/AIDs epidemic at the dinner table.

The 24-year-old competitive equestrian, who is in her second year of medical school at the Icahn School of Medicine at Mount Sinai, in New York City, told Sidelines Magazine that she credits her parents with teaching her to be a lifelong learner, saying they always supported her interests.

‘I was born into a huge situation of privilege,’ said Jennifer, who covers the publication’s July issue, ‘and I think it’s about using those opportunities and learning from them to find things that I’m passionate about and hopefully make the world a little bit of a better place.’

Cover star: Bill and Melinda Gates’ daughter Jennifer has opened up about what it was like to grow up with her billionaire parents during an interview with Sidelines Magazine 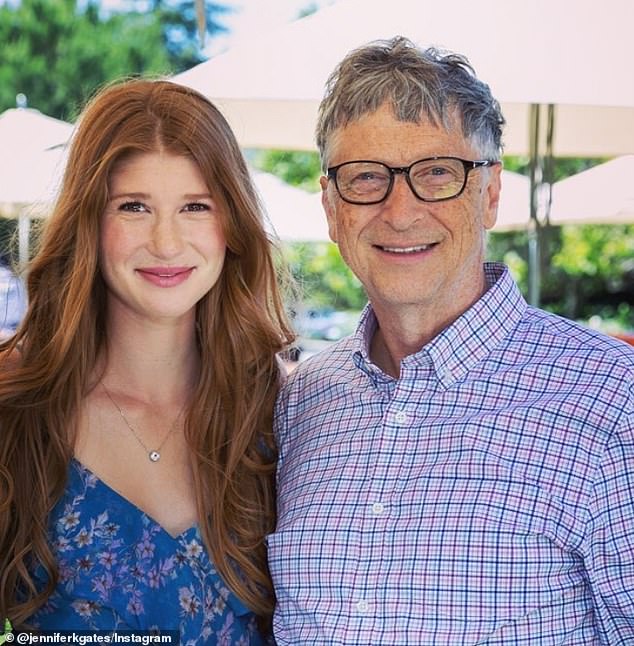 Goal: Jennifer, pictured with her father in 2018, said she was ‘born into a huge situation of privilege’ and wants to use her opportunities to ‘make the world a little bit of a better place’

Her father Bill, 64, famously co-founded Microsoft after dropping out of Harvard and became the richest person in the world in 1995, the year before she was born.

He has a current estimated net worth of $108.1 billion, according to Forbes, making him the second richest person in the world, right behind Amazon founder Jeff Bezos.

Jennifer, who has a brother, Rory, 21, and sister Phoebe, 17, said that while her parents Bill and Melinda, 55, have ‘obviously had a lot of privilege,’ they are both ‘incredibly hardworking people.’

She has been inspired by watching them learn and evolve over their years through their work with Microsoft and the Bill and Melinda Gates Foundation, which is dedicated to reducing extreme poverty and expanding educational opportunity to the world’s most disadvantaged people.

The couple’s charitable pursuits may have been what first sparked her interest in becoming a doctor. 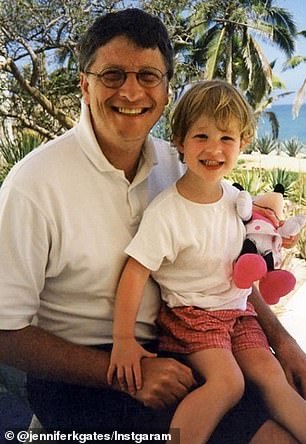 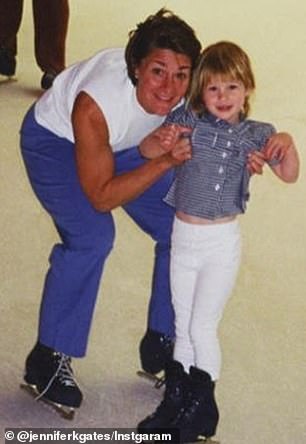 Honest: She said her parents always talked to her like she was an adult, and they would discuss children’s mortality and the HIV/AIDs epidemic over dinner when she was a child 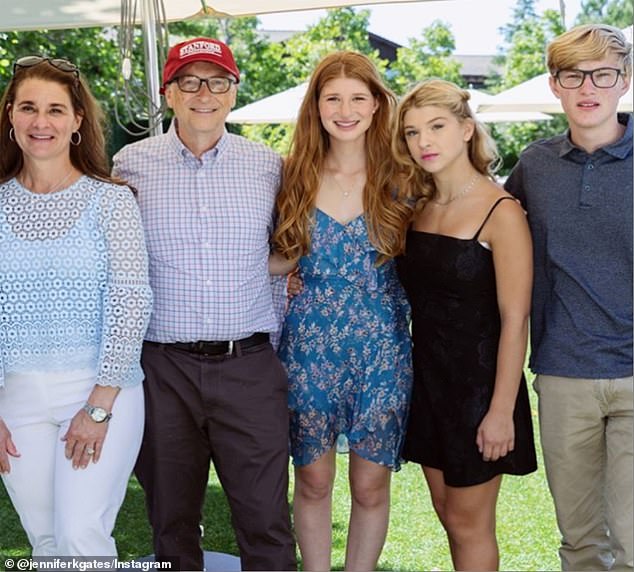 Proud parents: Jennifer, who has a brother, Rory, 21, and sister Phoebe, 17, graduated from Stanford University in 2018, pictured, and took a gap year before starting medical school

‘As a young kid, they always talked to me like I was an adult and weren’t willing to shy around difficult conversations,’ she said. ‘I grew up hearing about children’s mortality at the dinner table, about polio, about the HIV/AIDs epidemic.’

The medical student recalled how her mother once walked in on her playing ‘doctor’ as a child. She was telling one of her dolls that she had HIV/AIDS, and she was going to help her.

‘My mom thought at that point maybe they were talking a bit too much about global health at the dinner table,’ she said with a laugh.

Her pediatrician also inspired her to pursue medicine by showing her how a family doctor can help support children who aren’t as fortunate as she was to have parents who could always provide for her.

Jennifer graduated from Stanford University in 2018 and took a gap year before starting medical school in 2019 with the intention of becoming either a pediatrician or a family practitioner.

She also has a passion for horseback riding, which she started doing at the age of six. She is the only one in her family who rides competitively, and she grew up competing against Eve Jobs, the daughter of the late Apple founder Steve Jobs. 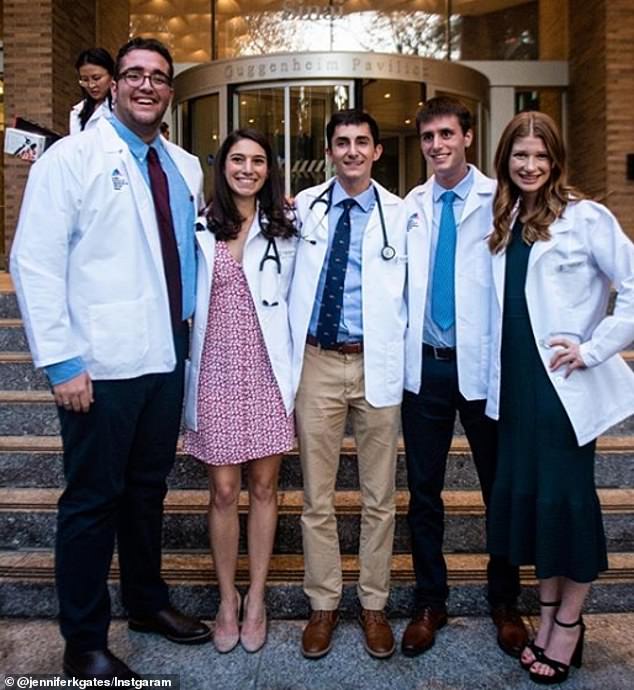 Success: Jennifer recently finished her first year at the Icahn School of Medicine at Mount Sinai, in New York City 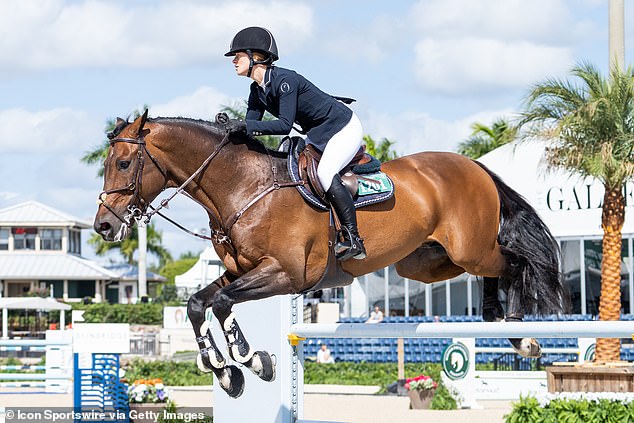 Goals: Jennifer, pictured in February, is also an accomplished equestrian and hopes to one day compete for Team USA at the FEI Nations Cup 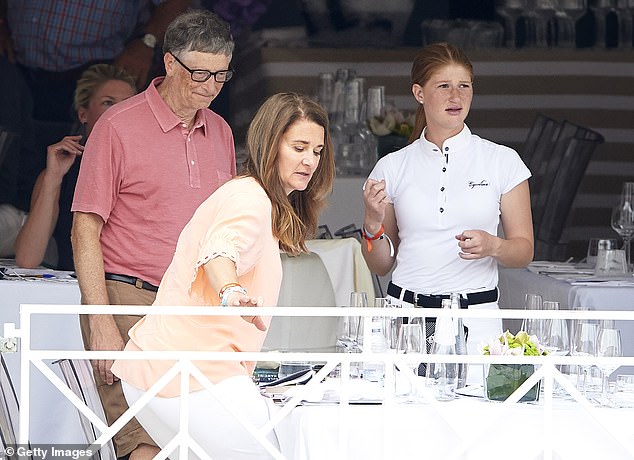 Making it work: Jennifer, pictured with her parents in 2017, has managed to balance riding with her studies. She said her parents have always supported her interests

The accomplished equestrian hopes to one day compete for Team USA at the FEI Nations Cup. She has managed to balance her riding with her studies so far, though she admitted it hasn’t always been easy.

‘The first week of medical school I was so overwhelmed by the amount of content we had that I kind of forgot about my self-care, which has become really important for me,’ she recalled.

‘Since then, I’ve learned to rebalance and make sure I have time for sleep, relationships, exercise, quiet time — all of the fundamentals that help me show up for the schoolwork and to show up for my patients in the future.’

It has been a big year for Jennifer, who became engaged to Egyptian show jumper Nayel Nassar in January after her first semester of medical school.

She announced the news on Instagram, sharing a photo of them sitting in the snow on the ski slope where he had proposed.

‘I’m so lucky to have him as my partner,’ she told Sidelines. ‘He’s incredibly supportive, humble, and loyal, and someone that I look forward to building a life with, growing and supporting each other through both our shared passions and our individual ones.’ 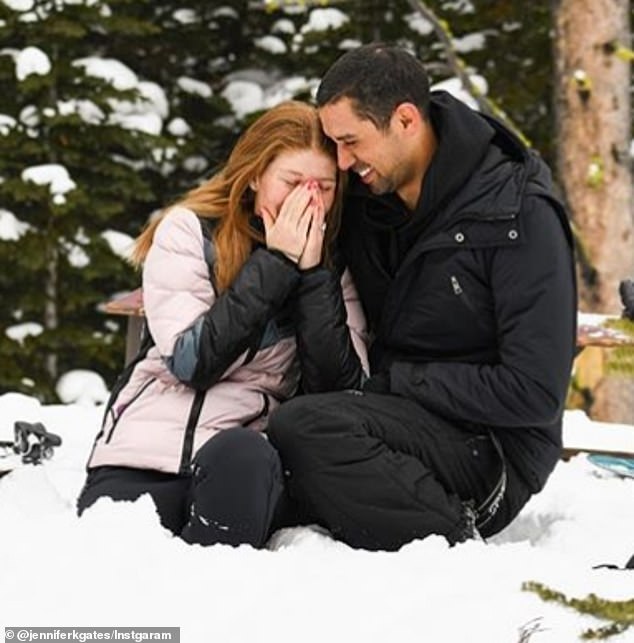 Amazing moment: Jennifer got engaged to Egyptian show jumper Nayel Nassar in January after her first semester of medical school 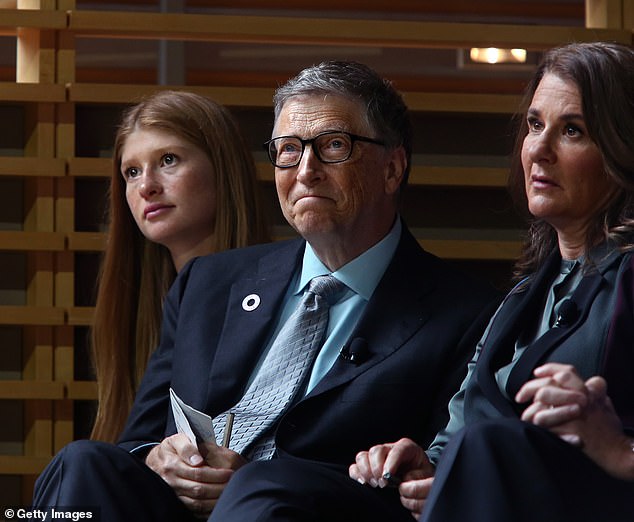 Inspiring independence: Bill has said that his three children, Jennifer, Rory, and Phoebe, will only inherit a ‘minuscule portion’ of his wealth and will ‘have to find their own way’

While Jennifer and her siblings come from incredible wealth, their father has made it clear that they won’t be inheriting the entirety of his massive fortune.

‘I don’t think that amount of money would be good for them,’ he told DailyMail.com in 2011. ‘It will be a minuscule portion of my wealth. It will mean they have to find their own way.

‘They will be given an unbelievable education and that will all be paid for. And certainly anything related to health issues we will take care of,’ he added. ‘But in terms of their income, they will have to pick a job they like and go to work.’

Room and board appear to be a part of that deal. In 2018, Jennifer’s parents bought her a $5 million condo in Upper Carnegie Hill before she started medical school.

According to Architectural Digest, the three-bedroom, 2,389 square foot apartment once belonged to NBA star Carmelo Anthony and his wife, LaLa. The lavish condo features windows overlooking Central Park and has a gym, children’s playroom, and a residents’ lounge.

In addition to the pricey pad, Bill dropped nearly $16 million on a 124-acre horse farm in Westchester County for Jennifer.