Roseanne Barr continues to be widely criticized for firing off a string of racist and anti-Semitic tweets on Tuesday which ultimately led to the cancellation of her hit show by ABC.

The tweets in question were so offensive they even managed to bring together Bill O’Reilly, Sean Hannity, Joe Scarborough and civil rights leader John Lewis, who all slammed the star for her comments.

It was a tweet about Obama advisor Valerie Jarrett that caused most of the outrage, with Barr writing: ‘Muslim brotherhood & planet of the apes had a baby=vj.’

That came after she had accused Jarrett of aiding in a cover-up of Obama’s illegal actions during his presidency, a claim for which there is not factual basis or proof at this time.

One of her former writers who is now the Emmy-winning producer of Modern Family was one of the first to respond to the comments.

‘Hard to believe a woman who supports a man who calls nazis “very fine people,” would turn out to be a miserable racist bag of s***. I’m definitely team @WandaSykes!’ wrote Danny Zuker

‘I wrote on the original “Roseanne” where we used to denounce nativism, racism & homophobia. Nauseating to see what she’s become. Looking forward to continue not watching this show.’

Rock bottom: Roseanne Barr is being criticized by numerous politicians and pundits for her racist tweet about Valerie Jarrett which led to her show’s cancellation

To the point: ‘Hard to believe a woman who supports a man who calls nazis “very fine people,” would turn out to be a miserable racist bag of s**t,’ wrote one of her former writers Danny Zuker (above) 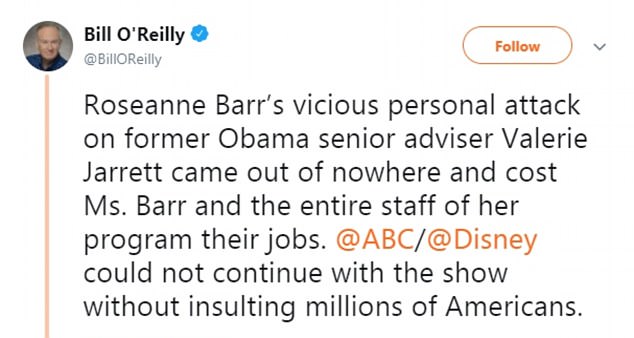 Zuker was not alone in his denouncement of Barr, with many others quickly following suit.

‘Roseanne Barr’s vicious personal attack on former Obama senior adviser Valerie Jarrett came out of nowhere and cost Ms. Barr and the entire staff of her program their jobs. @ABC / @Disney could not continue with the show without insulting millions of Americans,’ wrote O’Reilly on Twitter.

Hannity meanwhile addressed the controversy on his daily radio program, saying: ‘It is an outrageous comment. She was right to apologize.’

He went on to say: ‘I think with social media a lot of people just send things out. Especially comedians are always in danger ’cause they just think they’re being funny and they’re not.’