The small town of Beaconsfield couldn’t be much more different to Canberra, but it was there, more than a decade ago, that Bill Shorten began his march to The Lodge.

When the Tasmanian gold mine collapsed at 9.26pm on Anzac Day, 2006, the then Australian Workers Union national secretary was in Canada on a business trip.

But within hours Mr Shorten had begun the journey to Tasmania, wanting to be there as the effort got underway to rescue trapped miners Todd Russell and Brant Webb.

It took 14 days to free the pair, during which time Mr Shorten became the face of the incident – his face broadcast endlessly into homes across the country with regular updates on the search.

His support for the miners, their families and the small town of 1,000 people was the first step on his way to being the front-runner for the upcoming election on May 18.

Now, on the 13th anniversary of the day he walked free, Todd Russell told Daily Mail Australia that Mr Shorten had kept in regular touch since the disaster and is, in his view, the best man to lead the country.

Labor leader Bill Shorten (centre) has a beer with Todd Russell (left) and Brant Webb (right), the two survivors of the 2006 Beaconsfield mine disaster, while on the campaign trail back in 2016 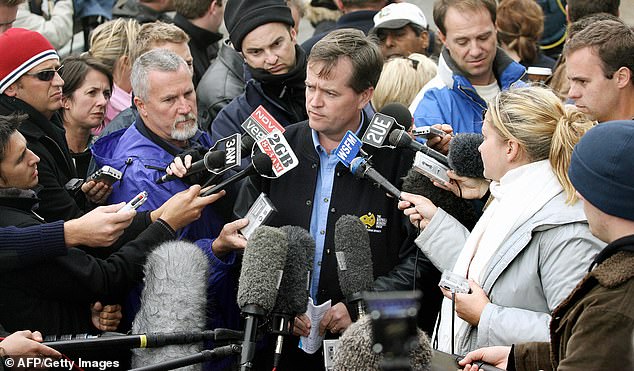 In his role as national secretary of the Australian Workers Union, Mr Shorten (pictured) became the face of the Beaconsfield disaster by providing regular updates to media throughout the 14 days that Mr Russell and Mr Webb remained trapped in the gold mine (pictured in background) 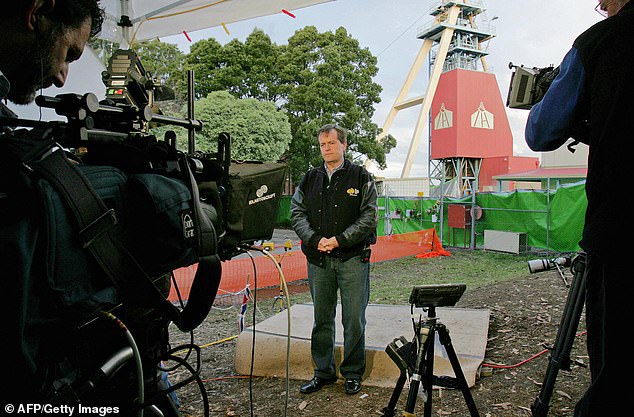 ‘He’s a ripper of a bloke. He’ll have my support – he always has,’ Mr Russell said of the Labor leader.

‘My mum, dad and (my ex-wife) Caroline all had a hell of a lot to do with him over the 14 days (I was trapped), and they loved him.

‘I sat and watched his interview yesterday when he talked about where he came from with his mother and his brother… it just goes to show he is a human.’

Mr Shorten’s involvement in the Beaconsfield disaster began on Friday, April 28 – the day he finally arrived in the small town after flying in from the other side of the world.

The day before he got there, rescue crews had recovered the body of Mr Knight.

While the crews continued to search for Mr Russell and Mr Webb, many feared by the time they got to them it would be too late.

He’s a ripper of a bloke. He’ll always have my support

Mr Shorten spent close to 48 hours on the ground in Beaconsfield, before flying back to his hometown of Melbourne on Sunday, with the intention of returning a day later.

But at 5.45pm on Sunday, April 30, two rescuers breached safety protocols and went down to the level where the two trapped miners had last been.

Once there, they yelled out and Mr Russell and Mr Webb responded: ‘We’re in here’.

The two men famously spent the first five days sharing a single muesli bar between them, collecting water in their helmets as it seeped through the rocks and kept their spirits high by singing ‘The Gambler’ by Kenny Rogers, the only song both men knew. 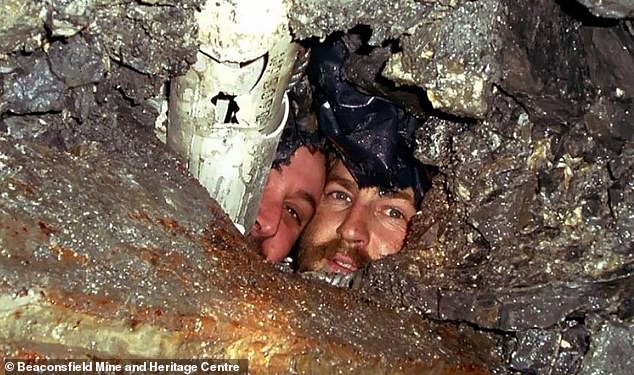 The first photo taken of Todd Russell (right) and Brant Webb (left) after rescue workers reached them in the early hours of May 9, 2006 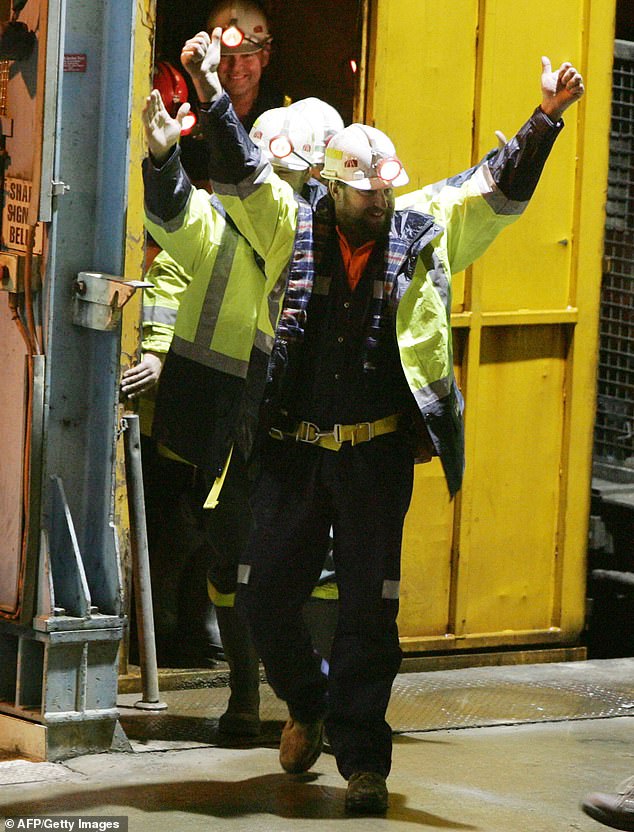 Todd Russell (pictured) was more than 900 metres underground when an earthquake caused a collapse in the mine, trapping him and his colleague Brant Webb. The pair were underground for 14 days before finally walking free in the early hours of May 9, 2006 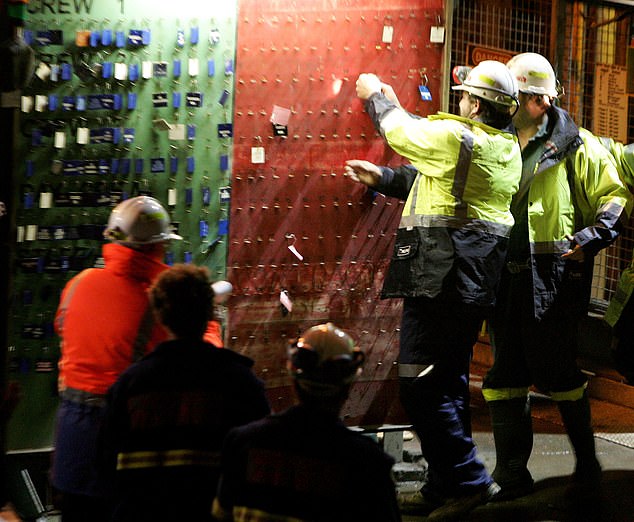 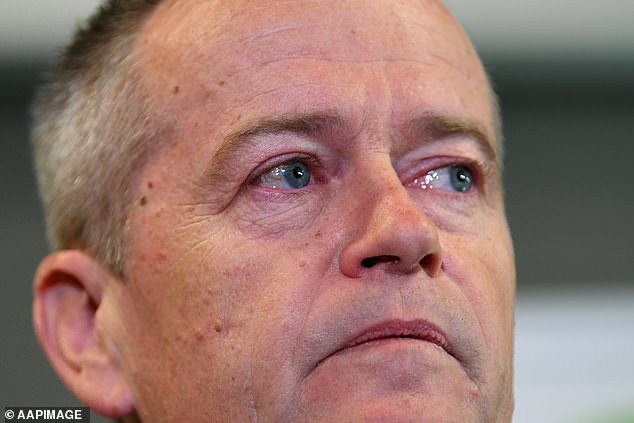 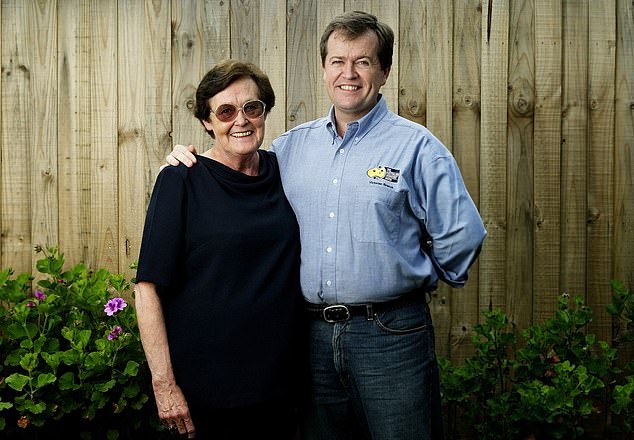 Upon hearing that the two men were alive, Mr Shorten called billionaire businessman Richard Pratt – a family friend of his then wife Deborah Beale – and asked to borrow a private jet so he could get to Tasmania fast.

‘I knew it was important to be on the ground early and quickly,’ Mr Shorten said.

He did not leave Tasmania again until days after Mr Russell and Mr Webb were freed.

It just so happened that Mr Shorten’s mother Ann was a friend of the mine manager.

In discussions between the union and the mine it was agreed that it would be best if Mr Shorten took the lead when it came to dealing with the media.

At the time of the mine collapse the union boss had already been considered a likely future Labor politician and potential party leader.

But Mr Shorten bristled at suggestions his involvement in the Beaconsfield disaster was done with one eye on his future political ambitions.

‘The whole issue is not about me – it’s about the blokes,’ he said.

Mr Shorten would end up becoming the member for Maribyrnong little more than a year later, but his good friend Mr Russell said the Labor leader’s intentions were always pure.

BEACONSFIELD: HOW THE MINING DISASTER UNFOLDED AND MADE BILL SHORTEN A NATIONAL NAME

– 9.26pm: A small earthquake causes a collapse below the Beaconsfield gold mine in northern Tasmania

– At the time of the collapse 14 other miners were below the surface, but they all managed to scramble to safety

– On the other side of the world in Canada, Australian Workers Union (AWU) national secretary Bill Shorten hears of the news and begins to travel home

– At 7.22am a body is discovered by the earth worker. It is later identified to be that of Larry Knight, a 44-year-old father-of-three

– Mr Shorten arrives at the Beaconsfield mine for the first time after making the 15,000km journey from Canada

– With little hope that either Mr Russell or Mr Webb will be found alive, Mr Shorten travels back to his hometown Melbourne. He plans to return to the mine site on Monday

– Back in Melbourne, Mr Shorten calls billionaire businessman Richard Pratt and asks to borrow his private jet to fly directly to Beaconsfield. The AWU boss is back on the ground within a matter of hours

– Mr Shorten’s mother Ann happened to be family friends with the head of the mine Matthew Gill. This helps in bridging the otherwise frosty relationship that had previously existed between the union and the mine

– Despite knowing where the men are the rescue crew finds it difficult to get to their exact location, encountering several tough rock walls and several minor collapses

– During this time Mr Shorten provides regular updates on the progress of the rescue effort, making him a common face in households around Australia

– Just after 4am on Tuesday, May 9, the rescue workers reach the two men. Mr Webb and Mr Russell are taken for medical examination before going up to the surface

– Todd Russell and Brant Webb walk out of the Beaconsfield mine at 5.58am. A few hours later both men attend the funeral for their colleague, Larry Knight

– After enormous interest and a bidding war, Mr Russell and Mr Webb agree to an interview with Channel Nine. The pair were rumoured to have been paid a combined $2.6million 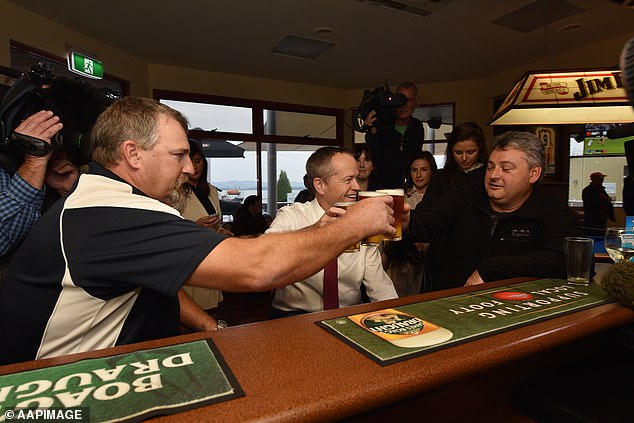 Mr Russell (left) told Daily Mail Australia that every year around Anzac Day – the anniversary of them becoming trapped underground – both he and Mr Webb (far right) receive a call from Mr Shorten (centre). ‘He rings me and says: ‘Hey mate, I’m thinking of ya’,’ Mr Russell revealed 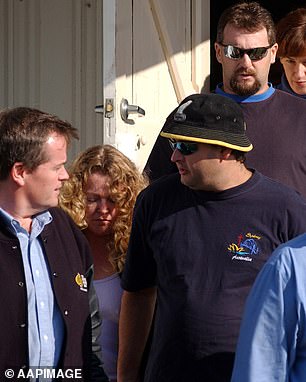 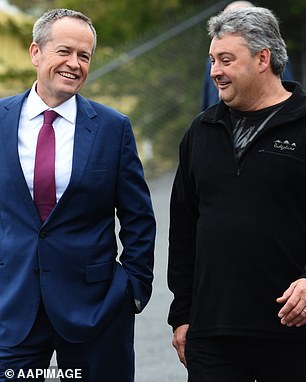 Mr Shorten walks alongside Brant Webb (front) and Todd Russell (back) in the days after they were freed from the mine. He has returned to Tasmania and caught up with the men on multiple occasions since

‘I find Bill on a personal note very professional and what he did for my family, Brant’s family and Larry’s family too, during the course of the rescue and after it, you’ve got to take your hat off to him,’ the former miner said.

‘And here he is, 13 years later, and he still rings me every year around Anzac Day.

‘It may not be on Anzac Day – and this year it wasn’t, it was a couple of days after – but he rings me and says: ‘Hey mate, I’m thinking of ya’.

‘So then we’ll have a 10 or 15 minute conversation away from politics and I just said to him: ‘Bill, I appreciate the phone call with everything you’re going through right now with your campaign’.

‘There’s a lot of people out there that dislike him, but on a personal note if they got to know the person that he is behind the scenes he’s a tremendous guy – he really is.’