It’s been quite a week for billionaire businessmen who just happen to be brothers. Three sets of fraternal entrepreneurs have been in the headlines: the Dones, the Aroras and the Issas. All are self-made, and all are from the North-West.

So who are these super-rich siblings, and is going into business with a brother – or sister – the way to a vast family fortune?

That has certainly proved the case for the Dones, gambling tycoons Fred and Peter, who founded Betfred.

Gambling tycoons Fred and Peter Done, who founded Betfred, stand to make £170m from the takeover of bookie William Hill by Caesars Entertainment of the US

The duo stand to make £170million from the takeover of bookie William Hill by Caesars Entertainment of the US.

Self-made petrol station moguls Mohsin and Zuber Issa, who built their EG Group empire from a single garage, are in pole position to take over supermarket Asda.

As for the Aroras from Sale near Manchester, they have become one of the UK’s richest business dynasties.

Brothers Simon, Bobby and Robin are behind the extraordinary rise of discount store B&M Bargains, which has defied the gloom engulfing most of the High Street.

The much younger Robin, 35, joined in 2008. Shares in the bargain bazaar have soared so high that it is now valued at £5billion on the stock market – more than twice as much as Marks & Spencer.

The trio inherited their drive from their father, who came to the UK in the late 1960s as an immigrant from India with £10 in his pocket.

The two elder brothers have worked together closely for decades and Simon has described their relationship as ‘one plus one equals 11’.

He adds: ‘I do believe we have both been more effective by virtue of that relationship’.

Far from shutting stores and shedding jobs, it plans to open up to 45 shops this financial year. 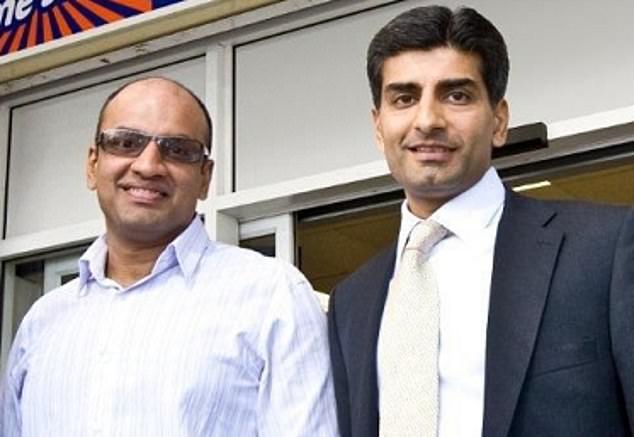 Brothers Simon (right) and Robin (left) Arora  are behind the extraordinary rise of discount store B&M Bargains, which has defied the gloom engulfing most of the High Street

The siblings own around 18 per cent of the business. Since lockdown their holding has risen by £460million.

Billionaire brothers Fred and Peter Done have also come a long way from their beginnings in the North-West.

The pair, now in their 70s, grew up in what Peter describes as the ‘slums of Salford’. Both left school with no qualifications aged 15 and worked in their father’s illegal bookies business.

They run the Betfred chain and have a 6 per cent holding in rival William Hill. Already worth an estimated £1.3billion, they stand to make more than £170million when William Hill is taken over by Caesars, in a deal the board recommended this week.

They are eyeing the chain’s British assets and could snap up its betting shops to add to their own.

A similar tale of rags to riches is that of the Issa brothers, who are spearheading a bid for Asda.

Mohsin, 49, and Zuber, 48, whose parents came to Britain from India with nothing, were brought up in a humble terraced house in Blackburn.

The brothers worked their way up from those unpromising beginnings and have built a £9billion petrol station empire.

Their ambition is to buy Asda from its US owner Walmart for around £6.5billion. 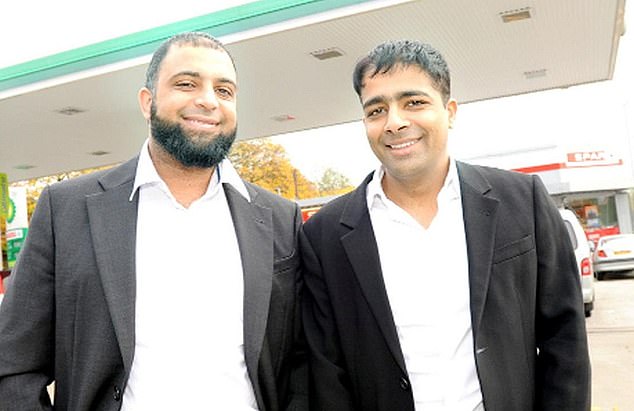 Asda bid:  Mohsin, 49, and Zuber, 48, Issa ,whose parents came to Britain from India with nothing, have built a £9bn petrol station empire.

The pair are worth an estimated £3.56billion, with assets including a £25million Kensington townhouse and a private jet that is kept in a hangar at Blackpool Airport.

They are also building, to objections from some locals, five identical mansions just three miles from the £115,000 Blackburn two-up two-down where they were raised.

But there are concerns about the level of debt in their business empire. Some observers question whether they are ideal owners for Asda, particularly at a time when supermarkets are providing a vital service in the pandemic.

As these three stories prove, sibling partnerships can be extremely powerful. Together they can achieve far more than they would singly.

Levels of trust and understanding are high, as is the incentive to succeed for the family as a whole. Their interests are aligned, as if they all succeed, the wider clan will be better off.

But of course not all brotherly relations in business – as in life – work out for the best.

Jealousy and sibling rivalry can come into play. And when a new generation of cousins emerges, it can create complications.

Take the Barclay twins, Sir Frederick and Sir David, whose empire includes the Ritz Hotel and the Telegraph newspapers.

After years in business, they fell out spectacularly in a row that ended in the High Court.

Sir Frederick, 85, and his daughter Amanda claimed that Sir David’s three sons – Alistair, Aidan and Howard – and Aidan’s son Andrew were parties to the recording of their private conversations over several months.

Another pair of super-wealthy brothers in the spotlight recently were Lakshmi Mittal, 70, and his younger sibling Pramod, 64.

Lakshmi, despite being one of the world’s wealthiest steel barons, declined to help when Pramod was facing bankruptcy earlier this year, though he has bailed out his younger brother in the past.

Judge Catherine Burton served a bankruptcy order against Pramod over a debt of £139,786,656.43 – plus interest – in the Insolvency and Companies Court in London earlier this year. 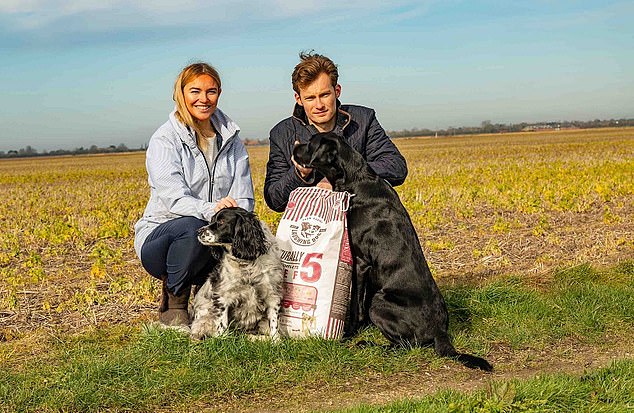 At the time, a source said: ‘Lakshmi feels for his brother but thinks on this occasion that he should not step in and his brother should sort this out himself.’

A breakdown in any business relationship can be costly and painful, but when it is with a sibling, it can be far harder to stomach. And in the family business stakes, sisters have had a relatively raw deal, largely because of historic prejudices about women running companies.

In family businesses they are often left out of the succession, even if they are more talented than their brothers.

This may change as society becomes more equal and more women become entrepreneurs.

Two young Welsh women who may be among the tycoons of tomorrow are Sophie and Hannah Pycroft from Barry, who set up Spectrum Collections, a brand of make-up brushes, in their garage in 2014.

It has net assets of more than £1million. Hannah, 31 and Sophie, 33, sell their brushes around the world through outlets including Boots, Superdrug and Amazon.

Brother-sister business partnerships are also rare. One exception is Tom and Rachel Grant, who are the third generation of their family business, Fold Hill Foods, the UK’s largest petfood business with a turnover of £41million and 140 employees.

The farm, in Boston, Lincolnshire produces a number of ranges, including premium brand Laughing Dog.

Rachel, at 32, is the elder by two years. She says: ‘An advantage of working with my brother is that we trust each other. We can count on each other to be completely honest, which is really important.’

‘But we are siblings, and so naturally there is no filter.

‘We can find ourselves at times being overly honest and critical with each other, so it is important that we both stay in our lanes and areas of expertise.

‘Mostly, it’s great working with him – we laugh a lot.’