Bills’ star linebacker Von Miller has been ruled out for the remainder of the regular NFL season and postseason in a bitter blow to Buffalo’s Super Bowl aspirations.

Coach Sean McDermott made the announcement on Wednesday, saying Miller had already undergone ACL surgery in his right knee since going down hurt in a 28-25 win against the Detroit Lions on Thanksgiving Day.

‘Unfortunate situation, for Von, obviously, and our team. Care for him, obviously, like we would any player,’ McDermott said. ‘We know how much this means to him in terms of playing and being with the team, so we look forward to getting him back, obviously off the field for the rest of the season and his leadership, and we’re certainly thinking about him as he recovers here.’

Bills linebacker Von Miller suffered an ACL tear in his right knee on Thanksgiving vs. the Lions 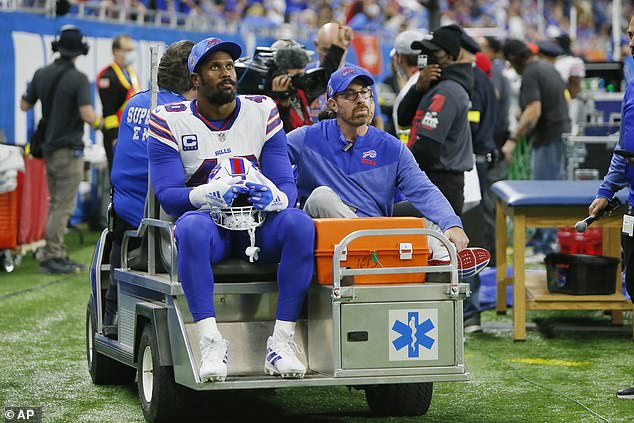 The player said last week on his podcast that the lateral meniscus damage to his right knee had been bruised during the NFL’s Week 7.

He had been hoping to return in time to face the New York Jets on Sunday after being placed on the Bills’ injury reserve ahead of the team’s 24-10 win on December 1.

Miller, who’s in the first year of a six-year, $120million deal with Buffalo, has been a defensive cog for the team this season, starting every game. He recorded 21 tackles and eight sacks to go along with a forced fumble in 11 games to date.

The former Broncos and Rams linebacker is also the NFL’s most active leader in sacks with 123-and-a-half since being drafted as the No. 2 pick of the 2011 draft class. 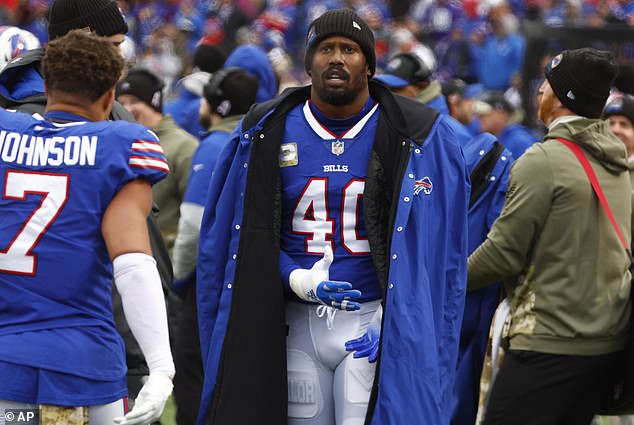 ‘Listen, you care about every player, right, and it affects you when guys go down,’ McDermott said of Miller’s long-term injury. ‘It’s the business we’re in, it’s a physical game, and so we care for everyone. Certainly, we care for Von in this case, and we’ll miss him. But as I said last week when he was out, it’s a time and an opportunity for other guys to step up.’

Most people recover from an ACL tear within six to nine months, according to Cleveland Clinic. In the US, there are between 100,00 and 200,00 incidents per year.

Meanwhile, the Bills (9-3) have won three straight to reclaim the top spot in the AFC, and can’t afford any slip ups if they want to finish first.

The Kansas City Chiefs hold the same overall record as Buffalo and trail on points for (total points a team has scored this season).