The 28-year-old freestyler from Southampton will lead our 59 athletes out at end of the Britain’s most successful ever Winter Games.

His epic leap in the Big Air snowboarding event yesterday earned him the bronze and gifted TeamGB a fifth Olympic medal – the most ever in the snow.

Morgan today told of his pride at being chosen to carry the flag and nerves that he might ‘mess things up’.

Bronze medal winning snowboarder Billy Morgan will be the TeamGB flag bearer at the Pyeongchang Olympics closing ceremony today. The games have been Britain’s most successful in the snow ever 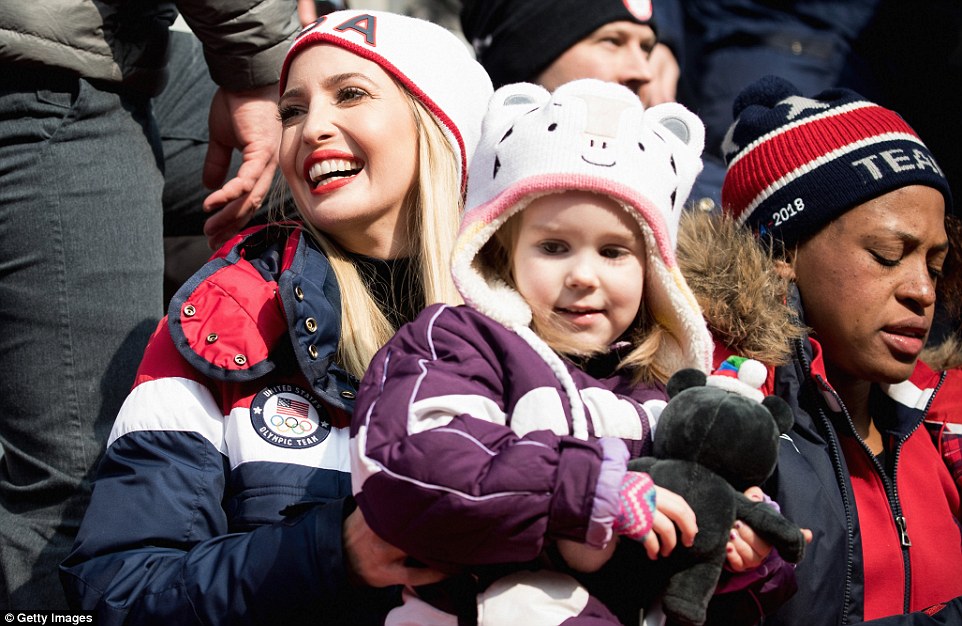 US special envoy Ivanka Trump was pictured smiling today as she watched the bobsleigh event at the Winter Olympics in Pyeongchang. She will be a spectator at the games’ closing ceremony later today 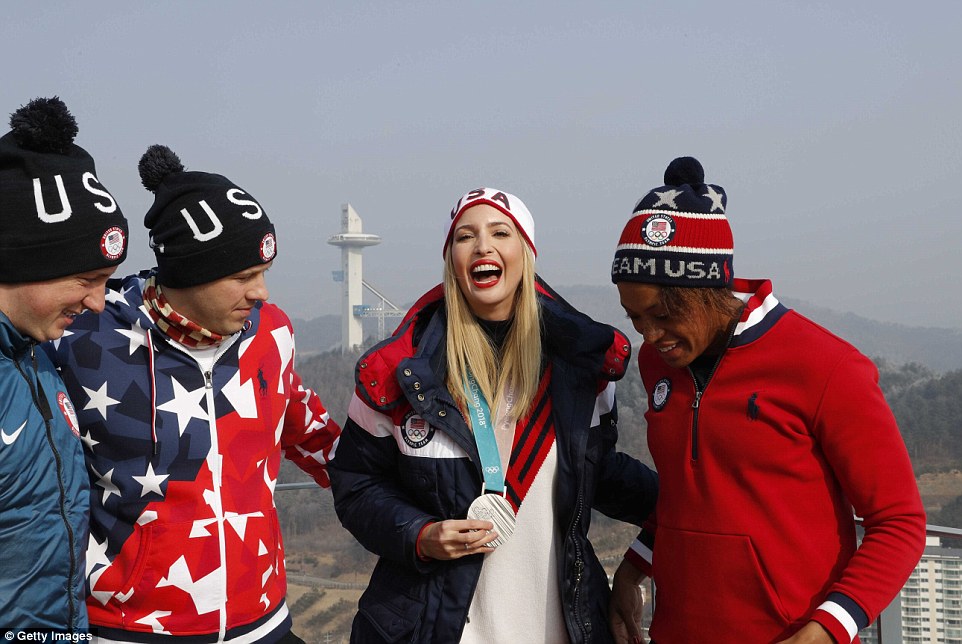 Ivanka posed with US athletes Taylor Morris, Matt Mortensen and Lauren Gibbs today. She will be joined in the crowd of the closing ceremony by a North Korean spy chief blamed for two deadly attacks on the Olympic host nation 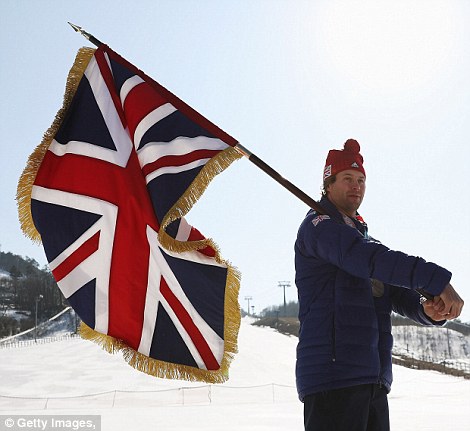 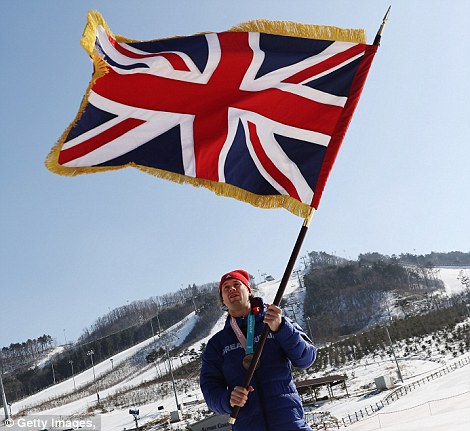 Flying the flag: Billy, 28-year-old freestyler from Southampton, will lead our 59 athletes out at end of the Britain’s most successful ever Winter Games. He spoke of his pride at being chosen to carry the flag

He said: ‘I’m pretty nervous already just thinking about carrying the flag but I’m sure it’s going to be amazing.

‘I’ll say to the athletes that it’s an hour to be the flagbearer and I hope everyone is stoked because it’s been a great experience out here.’

He added that he was still coming to terms with his Olympic medal victory.

‘I never expected to win a medal before the contest and I keep forgetting I did it so it’s nice to relive it now and then which is pretty cool.

‘It’s been a crazy Games for Team GB, our best ever, so I hope everyone can go home happy. It’s been amazing for me and I’m just over the moon.

‘The Olympics is a huge thing. When I first started [snowboarding] it was only halfpipe but it’s really helped push snowboarding along and really put it on the map. I think it’s been amazing for snowboarding.’

The closing ceremony, entitled ‘The Next Wave’ will highlight the Olympic spirit and present a vision of the future and a message of peace.

The show, which kicks off at 11am GMT, will mix traditional Korean imagery with modern aesthetics while presenting a future vision of the host-nation through modern Korean K-pop music with shows by boy-band EXO and female hip-hop singer CL.

Among the audience will be US special envoy Ivanka Trump and a North Korean spy chief blamed for two deadly attacks on the Olympic host nation.

Pyongyang General Kim Yong Chol is expected to come within touching distance of the US president’s daughter and White House adviser as both have been made guests of honour by South Korean leader Moon Jae-in. 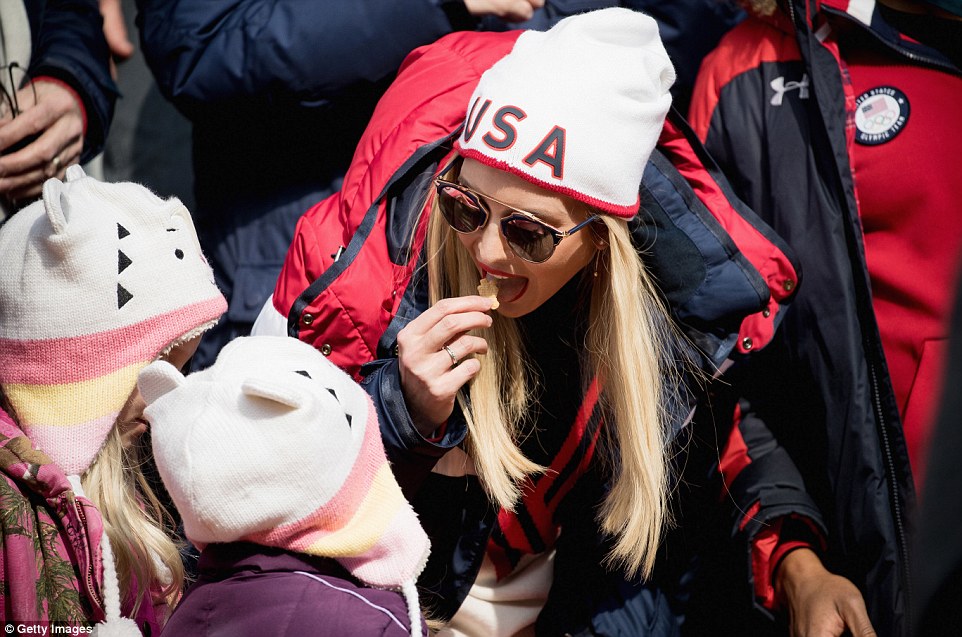 Ivanka will be a guest of honour at the closing ceremony, which starts around 11am UK time. Pyongyang General Kim Yong Chol is expected to come within touching distance of the US president’s daughter during the ceremony 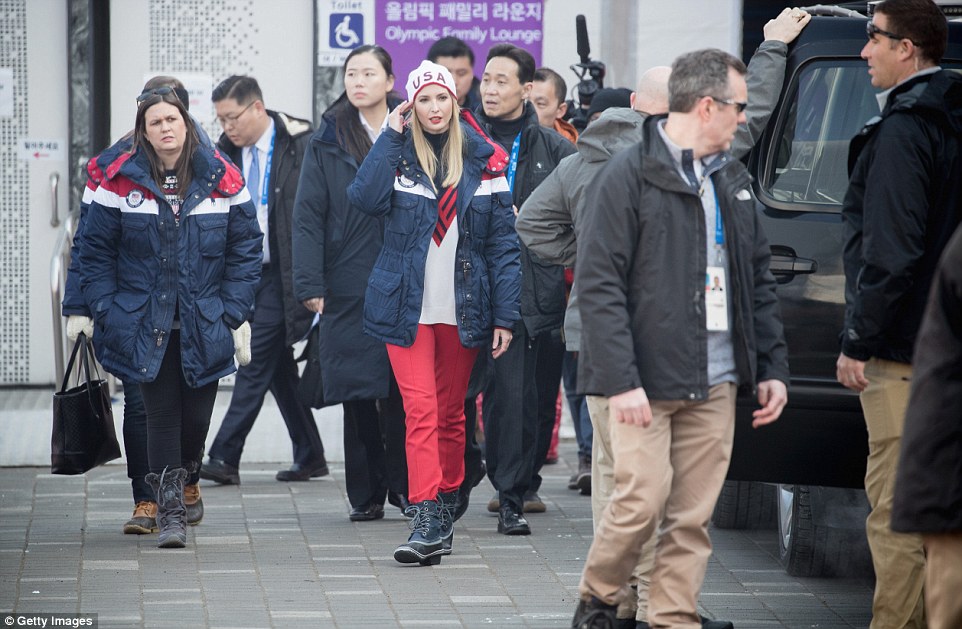 The closing ceremony, entitled ‘The Next Wave’ will highlight the Olympic spirit and present a vision of the future and a message of peace. Ivanka Trump was pictured today 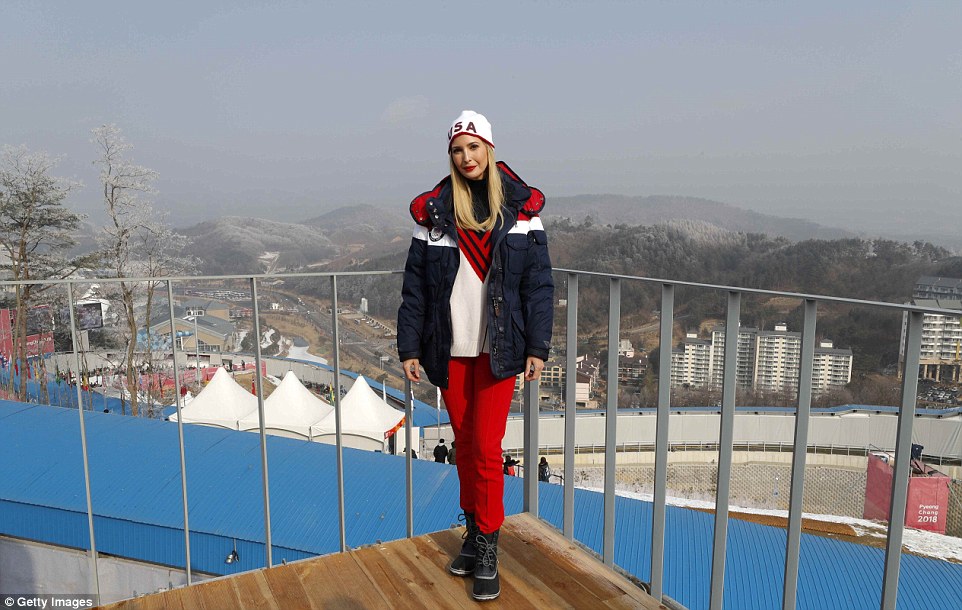 Ivanka could be seated close to Pyongyang General Kim Yong Chol. He is suspected of masterminding two devastating attacks on South Korea. It is not know whether the US and North Korean delegations will acknowledge each other

Kim is accused of masterminding the sinking of the South Koran war ship Cheonan that killed 46 sailors and the artillery bombardment of a South Korean island that killed four people.

It is not known whether the US and North Korean delegations will acknowledge either other.

US Vice-President Mike Pence studious ignored the sister of Pyongyang despot Kim Jong-un when she attended the opening ceremony as part of a high-level delegation from the North.

Pence also refused to stand for the ‘united parade’ parade of North and South Korean athletes.

The ceremony will include a preview of the 2022 Beijing 2022 Winter Olympic Games – with an eight-minute film of what sports followers can expect, shown at the Pyeongchang Olympic Stadium.

For his part Billy Morgan said he hoped TeamGB’s performance during the Pyegonchang Games provided inspiration for ‘everyone back home to carry on doing their sports’.

He said he was trying not to lose his Olympic bronze medal which he kept in his pocket.

The party-mad snowboarder revealed he was in bed by 10pm last night after ‘sending it pretty hard too early and peaking out’ at a party hosted by his sponsor Red Bull. 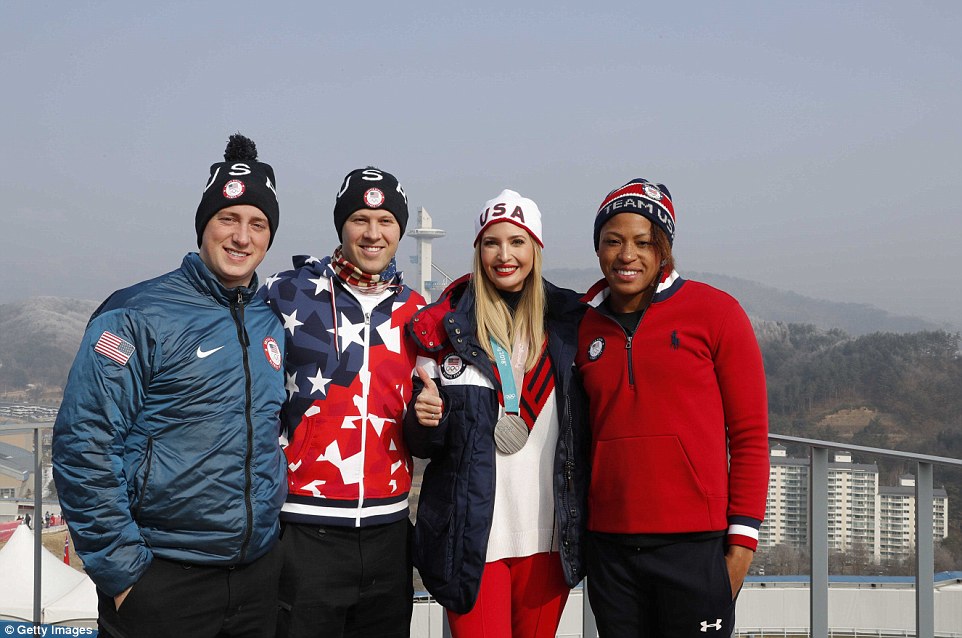 He said: ‘I was in bed pretty early.

‘I don’t remember but apparently I was taken back in a trolley.’

Free-spirit Morgan, who is known for his hard-drinking antics, said he was ‘not planning’ any high jinks this evening, but added that he ‘didn’t need to plan for something to happen’.

He added: ‘The flag is heavier than I thought it would be.

‘Normally I’m all covered up with goggles and stuff so I might mess up.’

Morgan said he welcomed plans to build a snowboard centre in Manchester, which would help TeamGB win more medals. 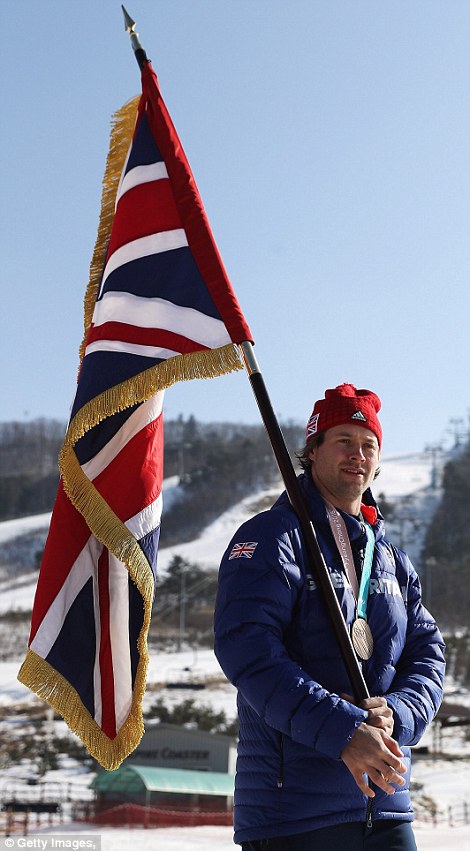 Pride of Britain: Billy Wright will fly the flag for his country at today’s Olympic closing ceremony in Pyeongchang. He will be watched by Donald Trump’s daughter, Ivanka

He said: ‘We need more facilities if we want to push for further medals.

‘That would be amazing if we got something like that.’

And he urged youngsters to take up the sport.

Morgan revealed his father – a retired Royal Navy engineer known as Mad Eddie who recently suffered a stroke – had watched his medal winning jumps with his ‘mates’ at a pub close to the ski centre where he learned to snowboard in his home-town Southampton.

‘He was in the Sporting View pub in the Sports Centre in Southampton where all my mates went.

‘They had a free-style session at the ski centre and then everyone went there afterwards. Apparently it was pretty wild.’

Morgan told how he would have followed his grandfather and father into the navy if he had not taken up snowboarding. His brother Ashley Morgan is a Royal Navy helicopter navigator.

He said: ‘If I wasn’t a snowboarder I would probably have joined the navy

‘My dad, my brother and my granddad were all in the military.

‘There was a stage when my dad said; “When are you going to get a job?”

Because I had completely flopped college and just went snowboarding.

‘I did not really get on with the academic stuff. I don’t think I’m stupid but..

‘I did two seasons [in the French Alps] and then when I was about to start the third he said “come on mate, time to get a job”.

‘But that was around the time that I joined the British snowboard team and started training.

‘My dad and my family have always been really supportive in what I’ve been doing which has made a huge difference.’

Morgan said he was going to continue snowboarding and hoped he would be ‘good enough’ to make the GB team the Beijing Winter Olympics in four years’ time.