Biohacker inserts her Tesla key microchip in her own ARM

A biohacking YouTuber has inserted her Tesla Model 3 microchip into her own arm.

Software engineer and cosplayer Amie D.D. took the functional RFID chip out of her Tesla key and had it put into her body and says it is working perfectly.

The procedure was a success but the chip now has a mildly shorter range and has caused some irritation and swelling which is expected to settle down soon.

Her YouTube video talks viewers through the process of the procedure.

The chip was taken out of the card using acetone and a biopolymer layer was applied to make it safe for insertion.

A professional at a piercing shop in Texas called Pineapple then performed the  minor procedure and implanted the chip in the left arm of the YouTuber.

It currently is working fine, but there is some swelling at the site, and Amie needs to place her arm within an inch of the console to start her car.

She said in a tweet: ‘The area of the arm is inflamed and swollen right after implanting the chip. 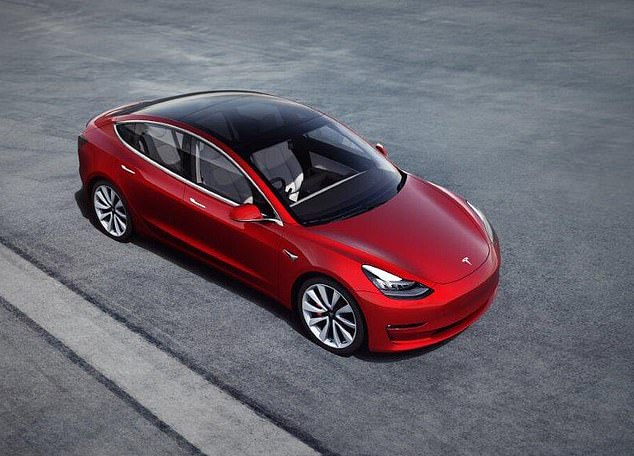 Th chip was taken out of the card using acetone and a biopolymer layer was applied to make it safe for insertion. Amie DD says it is currently working fine, but for some swelling at the site, and Amie needs to place her arm within an inch of the console to start her car (stock)

‘My friend records my videos and we didn’t have time to film the implant working with my Tesla this week because I’m at @defcon!’

Implanting microchips under the skin is not a revelation, but the use of it for a specific purpose and a Tesla is a first.

More than 3,000 Swedes have embraced microchips that contains details about their identity.

The miniature technology bypasses the need for cash, tickets, access cards and even social media.

BioHax International is the market leader in the innovate industry and has captured public imagination since it was started five years ago by Jowan Osterlund, a former professional body piercer.

Some people argue the conveniences gained from the procedure by so-called ‘body-hackers’ do not outweigh the risks to their private data.

HOW DO MICROCHIPS IMPLANTED UNDER HUMAN SKIN WORK?

Several Swedish firms are implanting their employees with microchips under their skin which can be used to replace keys, credit cards and train tickets.

The small implants use Near Field Communication (NFC) technology, the same as in contactless credit cards or mobile payments.

When activated by a reader a few centimetres (inches) away, a small amount of data flows between the two devices via electromagnetic waves.

The implants are ‘passive,’ meaning they contain information that other devices can read, but cannot read information themselves.

Near Field Communication (NFC) as contactless bank cards, and London’s oyster cards, suggesting it could be used further afield one day.