Bird Photographer Of The Year awards 2017

A jaw-dropping selection of the the best and most striking 2017 submissions for the annual Bird Photographer of the Year has today been released and the overall winner has been announced.

Nature photographer Alejandro Prieto Rojas won the top spot with his image of a pink flamingo feeding a chick, taken at Rio Lagartos, Mexico and will receive a £5,000 cash prize.

The annual competition is a collaboration between the British Trust for Ornithology and Nature Picture Library.

The winning submission: Photographer Alejandro Prieto Rojas won the top spot with this image of a famingo feeding its chick. It was taken at Rio Lagartos, Mexico. He will receive a £5,000 cash prize at an award ceremony. Mr Rojas took the photo during the annual feeding of the chicks. They are born with grey and white feathers and do not turn pink for a year or two 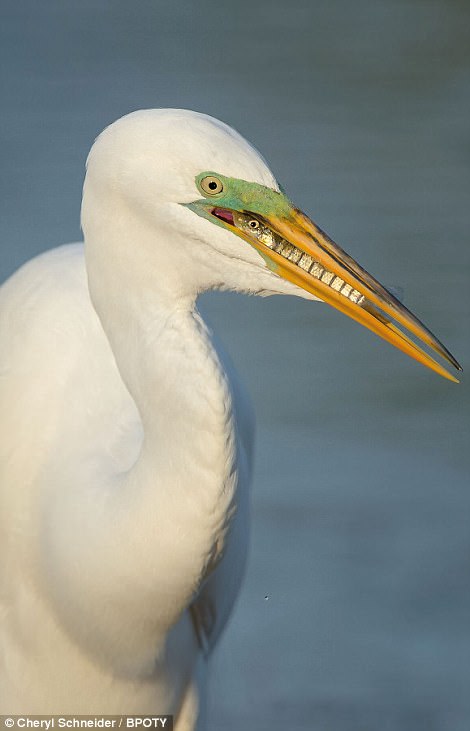 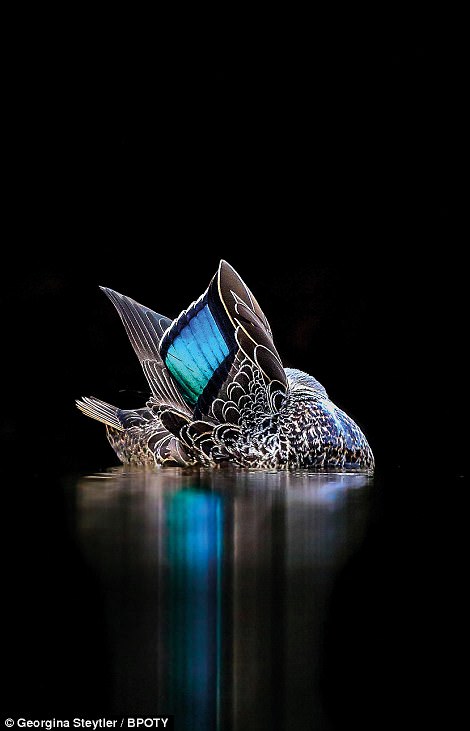 Breakfast and bedtime: Photographer Cheryl Schneider took this photo (left) of a Great White Heron catching a hapless fish which seems to be having something of an ‘oh dear’ moment. Georgina Steytler  from Toodyay, Western Australia, took this photo, right. She said: ‘This common species of duck’s most identifiable feature is the iridescent speculum feathers which are often only visible during preening or flight. I took this photo at a small lake. The still waters and the dark foliage of the background resulted in an opportunity to highlight the gorgeous feathers. I exaggerated the effect in Adobe Lightroom, but otherwise have not altered the original photo’ 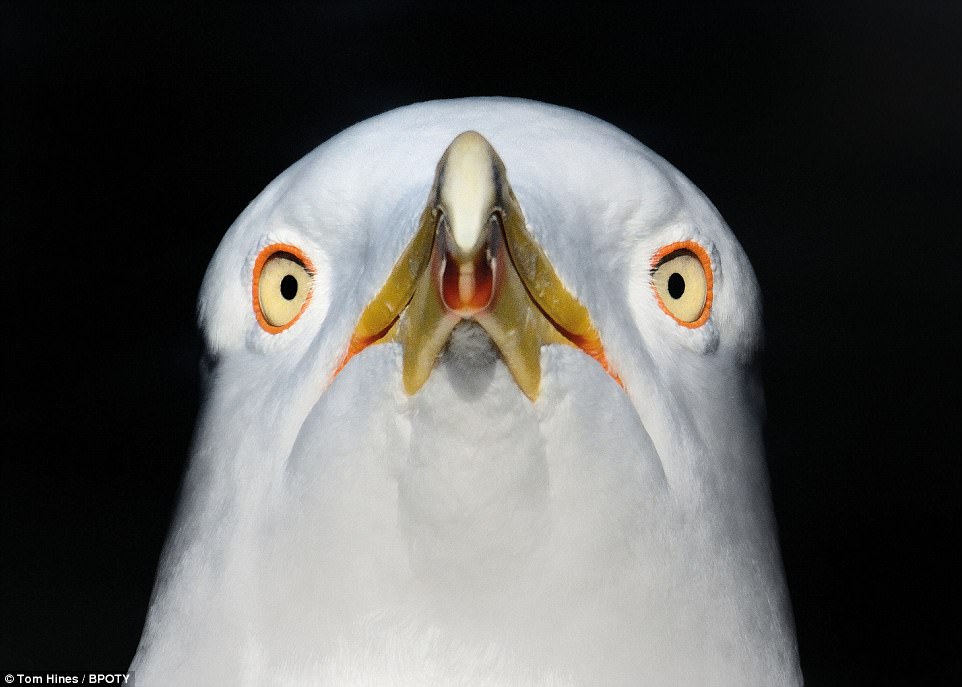 Head judge and television presenter Chris Packham said: ‘The standard of photography was extremely high and myself and the other judges were treated to some fantastic bird photographs.

‘But congratulations must go to Alejandro Prieto Rojas for his sublime image of flamingos, an incredible balance of colour, composition and emotion.’

The winner of the Young Bird Photographer of the Year competition was also announced. From the Czech Republic, Ondrej Pelanek’s ethereal image of a Whiskered Tern took first prize.

The award ceremony will take place at Birdfair at Rutland Water on Saturday 19 August, where Chris Packham will hand out the well-deserved prizes in the main events marquee at 4.15 pm. 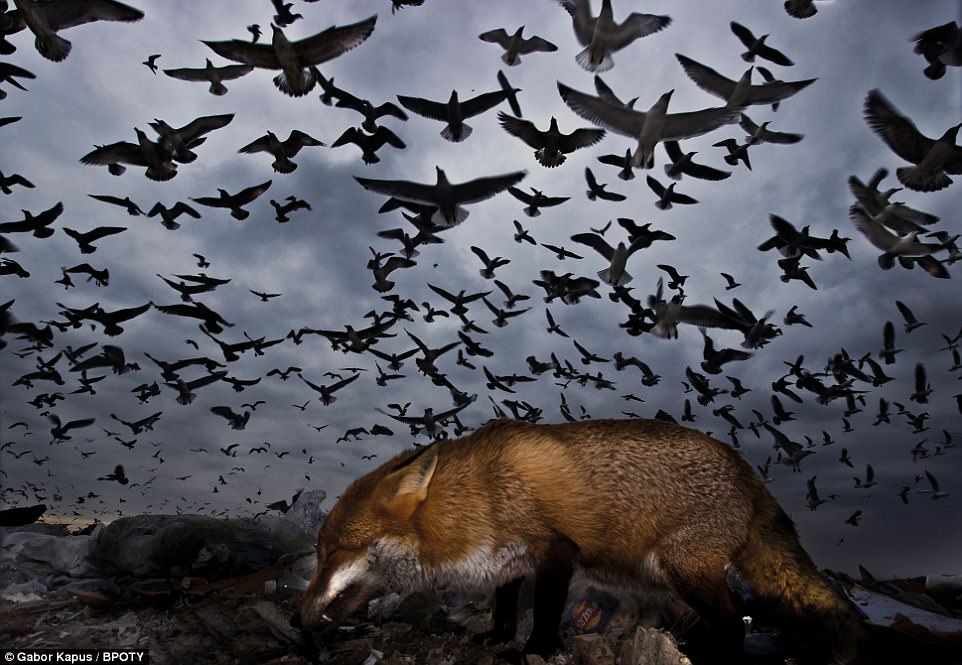 Dark and stormy: This picture of Pitsea landfill was submitted to the category ‘Birds in Flight’ and was given an honourable mention. Photographer Gabor kapus, from Aylesbury, Buckinghamshire, said: ‘We were ringing gulls at Pitsea landfill using cannon nets to catch the birds, the camera was on the ground just at the front of the net. I was trying to capture the moment when the net is fired and is still in the air above the camera. As we were waiting to fire the net this fox walked right at the front of the camera scaring all birds into the air -but at least I took this great image’ 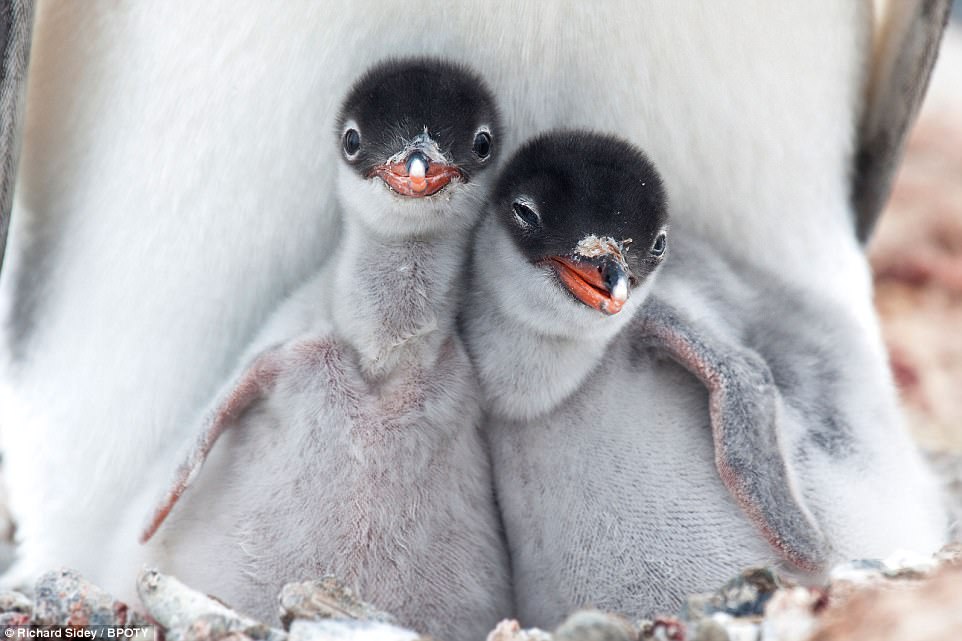 Adorable: This shot of two Gentoo penguin chicks was taken by Richard Sidey, from New Zealand, in Antarctica 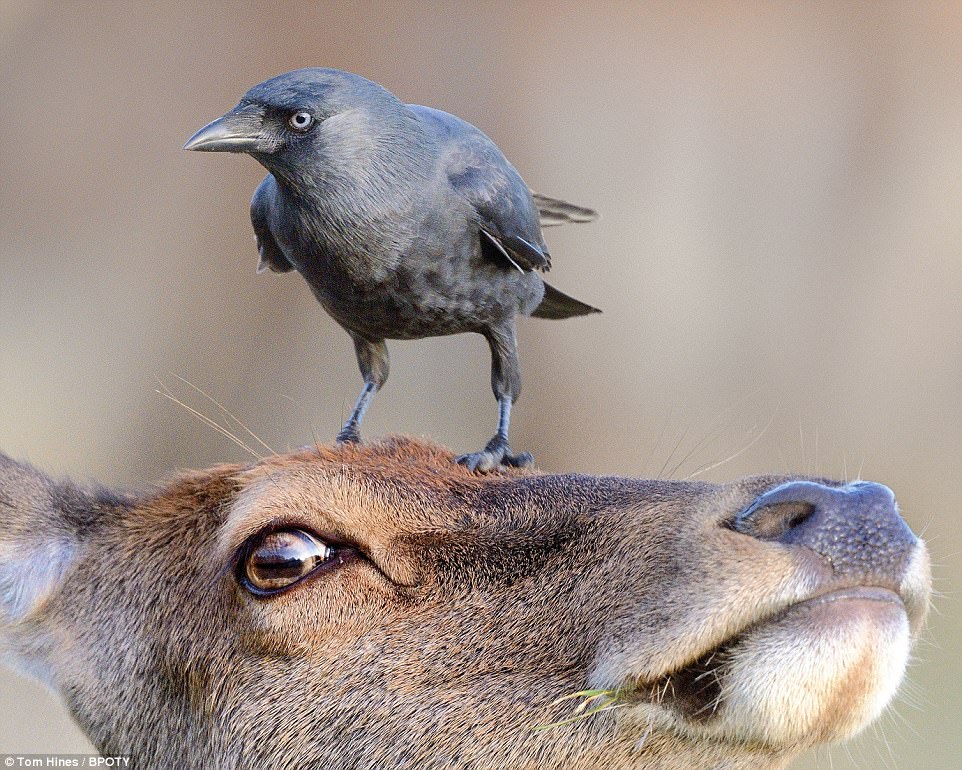 Balancing act: British photographer Tom Hines snapped this shot of a Western Jackdaw daintily perched atop a red deer in London’s Richmond Park. The birds regularly groom the larger animal for ticks and other insects 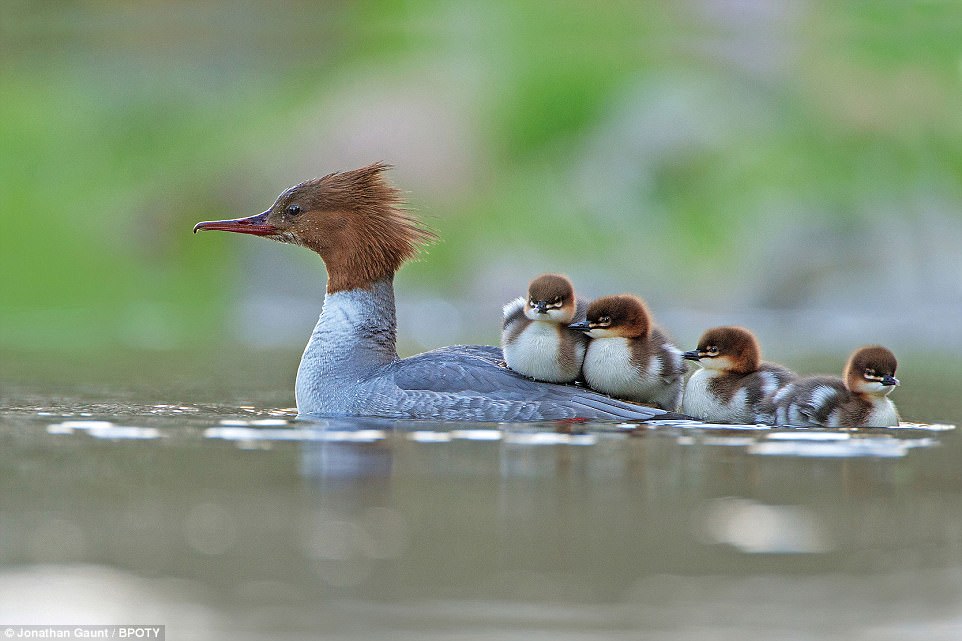 Catching a lift:  Jonathan Gaunt from Kelso snapped this picture of a female goosander with her newly hatched brood 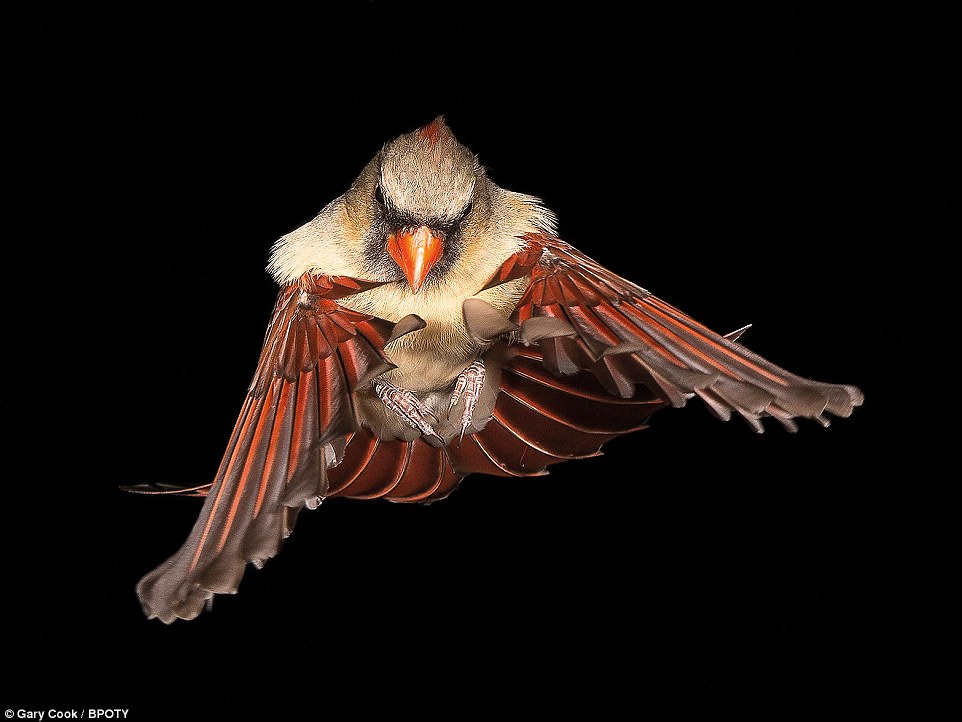 Astonishing: A female Cardinal contortio was captured on camera by photographer Gary Cook in Beavercreek, Ohio

The 2018 competition will then open for entries at midnight on this date.

There are seven categories to enter; find out more and upload your photos at the competition website.

BPOTY helps raise funds for the BTO, so far having raised over £5,500 from entry fees alone. The money has been used to help support the BTO’s young birders programme, aimed at engaging a younger generation of naturalists and ornithologists.

A competition book, published by William Collins, is also available. This lavish 256-page volume showcases the very best imagery from the competition and features the stories behind the images as told by the photographers themselves, plus all the technical camera information.

Bird Photographer of the Year with a foreword from Chris Packham is published 24 August by William Collins, £25. 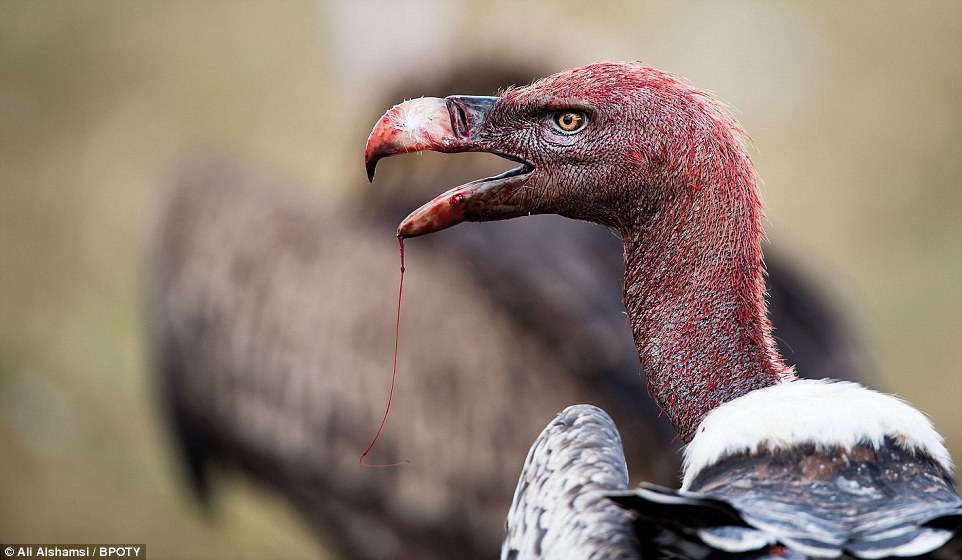 Haunting: This bloodied feeding vulture was captured by Ali Alshamsi, from Doha, Qatar. He took the picture on the Maasai Mara National Reserve, an area of preserved savannah wilderness in southwestern Kenya 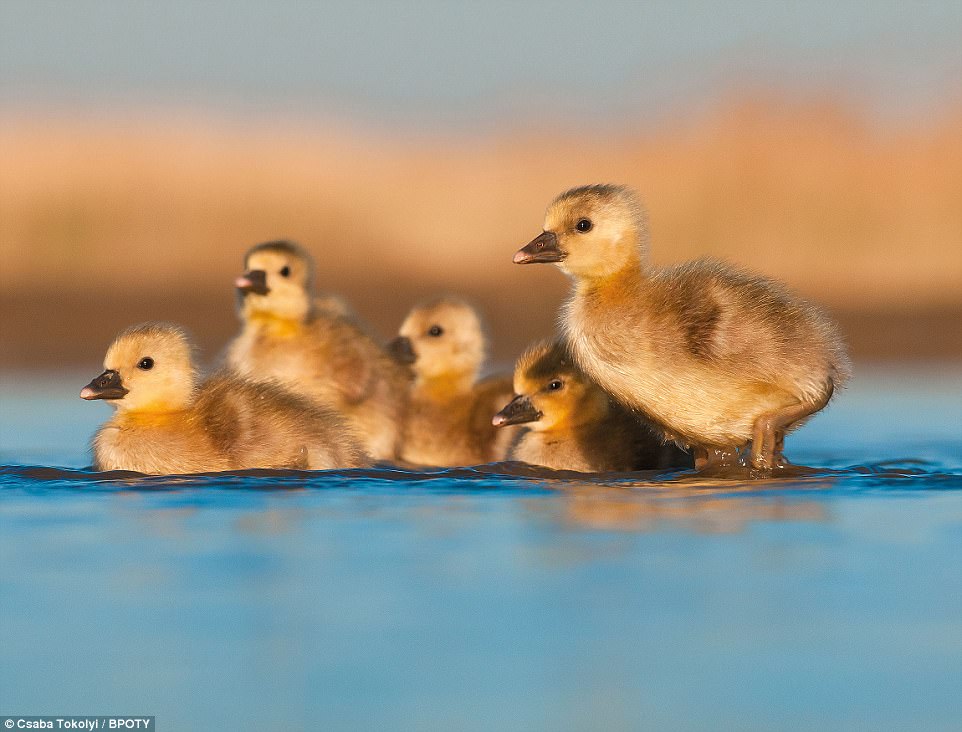 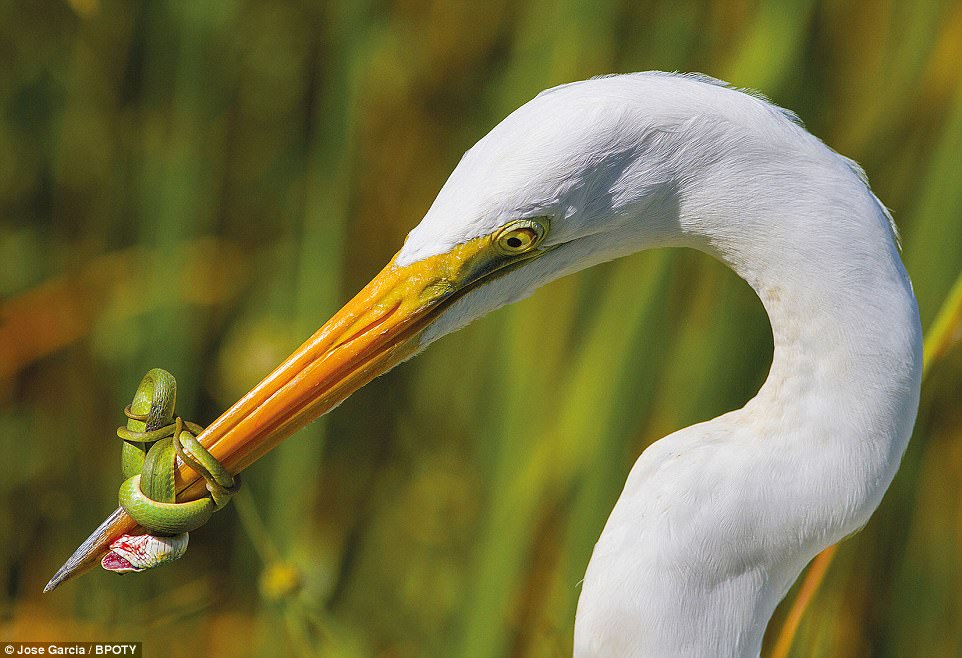 The battle: This shot is by Jose Garcia from Miami, Florida. He said: ‘This Great White Heron fighting a green snake in the Florida Everglades. The fight lasted for nearly 20 minutes with the Heron having to release its prey’ 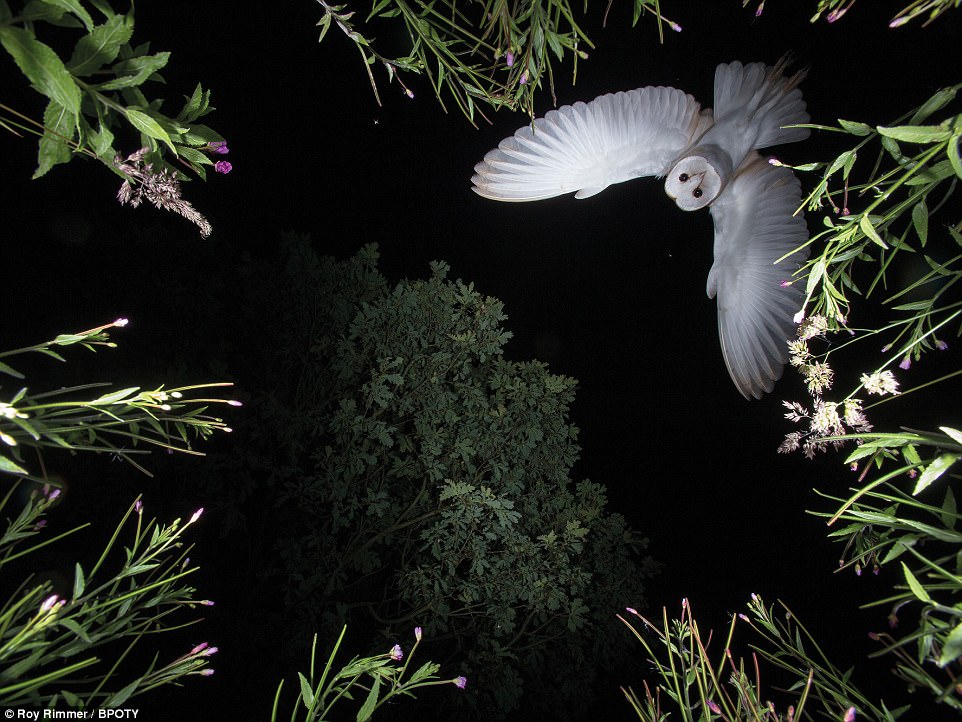 Floral flight: Barn Owl hovering by Roy Rimmer of Wigan, Lancashire. POTY helps raise funds for the BTO, so far having raised over £5,500 from entry fees alone. The money has been used to help support the BTO’s young birders programme, aimed at engaging a younger generation of naturalists and ornithologists 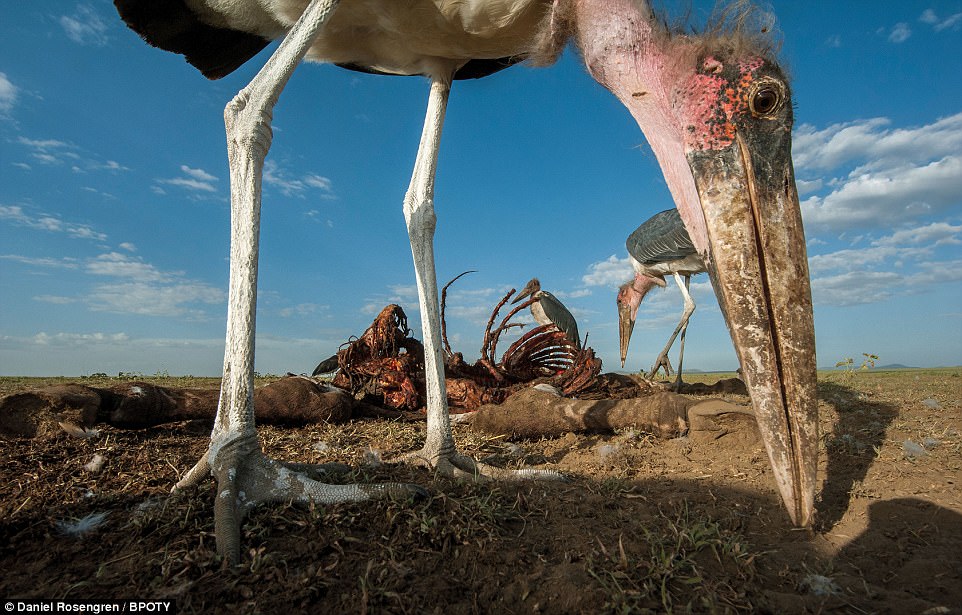 Scavengers: Marabou Storks were photographed by Daniel Rosengren,frmo Sweden. He said: ‘Marabou Storks are scavengers, but they are not that good at ripping big pieces of meat off a carcass. Instead, they rely on other scavengers like hyenas or vultures to do that, so they can take the easy pickings from the ground. This photo was taken by placing the camera with a wide angle lens near the zebra carcass and trigger it with a remote from a distance.’ The photo was taken in Tanzania