Residents at one of Birmingham’s most luxurious developments have spoken of their ‘living hell’ with overflowing rubbish, broken lifts and no WiFi for nine months.

The Bank Tower 1 in the city centre is advertised as a ‘pinnacle of design and quality’ and ‘Birmingham’s most desirable place to live’.

But the 21-storey building has left many residents less than impressed, with a current rating of 1.4 stars on Google with reviews warning prospective tenants to ‘stay away’.

Now the building’s tenants and homeowners are worried they are losing money on their properties.

Residents at Bank Tower 1, advertised as one of Birmingham’s most luxurious developments, have been complaining about ongoing issues in the block of flats

Resident Bernard Caroll, a 67-year-old retiree, told BirminghamLive about his difficulties since moving into The Bank seven months ago.

He said: ‘It’s been hell since I’ve lived here. Most people who came in September weren’t told about the existing issues with the WiFi.

‘The issues and responses from the developers are so unfair and it’s made me ill actually.

‘They’re selling it as five-star accommodation so I can’t believe these issues are going on.

‘I honestly don’t believe anybody would have moved in here if they’d known about the internet.

‘We’re being treated like idiots. I stay awake all night thinking about it. I’d move out tomorrow if I could. I feel robbed. 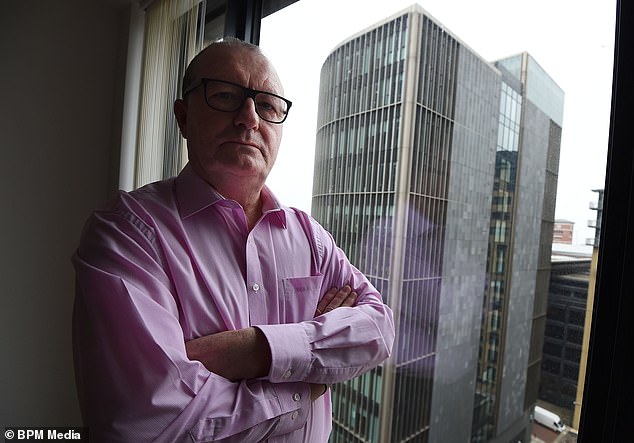 Resident Bernard Caroll, a 67-year-old retiree, said he has been enduring a ‘living hell’ since moving in seven months ago

‘Being on my own, the internet is a bit of a life line. It’s very comforting to be connected and I’ve lost that for the last seven months. I’m going crazy.’

Though residents were provided with a public WiFi after they voiced their concerns, they say this connection does not work the majority of the time due to the volume of people trying to access it.

Another resident, 36-year-old design engineer Samuele Sois, said the ongoing issues left him unable to work from his apartment.

He said: ‘We’ve been stranded for months and months. We now have a public WiFi connection, but it’s extremely slow and doesn’t work at all during peak times.’

‘I moved in September and I can remember seeing a letter promising that the issue will be fixed within a week, but it still hasn’t.

‘That’s the worst bit, the level of communication and the basic need for honesty and transparency from the management. They keep promising and not delivering.’

Mr Sois added that there are ongoing issues with the building’s lifts, meaning he has to carry his young child and pram up to the 20th floor.

He said: ‘They left a broken elevator for months and months. I have a young child so it was very difficult to carry him and the shopping upstairs.’

The design engineer said the building’s cleanliness is another issue, with overflowing rubbish and dirty windows a common sight.

The growing list of concerns is causing some residents to question their investment. 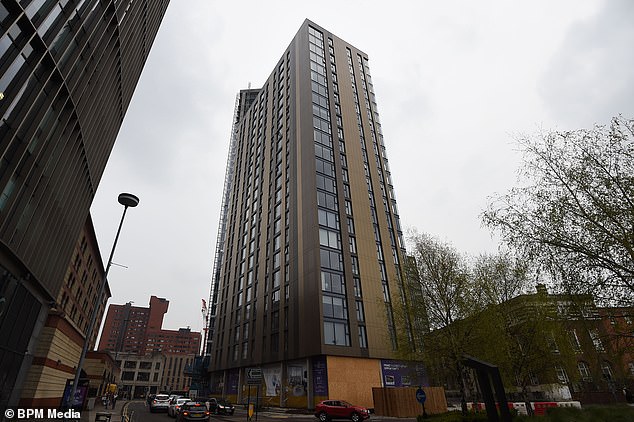 Residents have complained about broken lifts, dirty windows, uncollected rubbish and no WiFi

Ricky McDowall paid £220,000 for a one-bedroom apartment in the building but now fears the poor reviews could impact him if he decides to sell in the future.

He said: ‘I love the apartment, but having the internet would be nice. It’s abysmal that you pay for a luxury apartment with a state of the art building and then you don’t have internet.

‘It said state of the art on the advertisements, yet they fitted copper cables instead of Fibre Optic. Copper is currently being fazed out.

‘People are reviewing the building online and in five years time that could come back to hurt me if I decide to sell the place.

‘I’m worried about losing value on my apartment because of this.’

Mark Holbeche, of Regal Property Group, the building’s developer, said the company had been working with contractors to resolve the issues.

He said: ‘We were concerned to discover that a small minority of residents have experienced initial set up issues at The Bank.

‘Whilst we worked closely with our contractor Wates to produce a snag-free building on completion, as with any new-build property, there are likely to be minor snagging issues on first occupation.

‘We have worked diligently to address them in a timely and effective manner, while keeping residents fully updated.

‘We would ask for the assistance of residents in ensuring that, for instance, apartments are correctly ventilated as explained in the home guide which all residents receive on completion, and that the advised weight limits in the elevators are noted, as this has caused minor issues.

‘Likewise, we will ensure that our managing agents are available and approachable to assist wherever possible.

‘While there has been an unfortunate and unavoidable delay in installation, I am pleased to say that fibre broadband is now fully connected throughout the building via Virgin Media and residents can now register to set up their connections.

‘A high-quality temporary internet connection was made available to residents throughout the interim to ensure disruption was kept to a minimum.

‘As with much of the city, waste disposal has been affected by the Birmingham City Council bin strikes and our managing agents have organised private refuse collections at no extra cost to residents.

‘Windows are also cleaned quarterly, and our contractor has organised specialist services to dispose of debris.

‘Work on the completion of the second tower is well underway and the entire development is due for completion later this year, at which point communal spaces such as the gym, residents’ coffee lounge and landscaped area, as well as the retail space, as per the timetable provided to all purchasers.

‘The Bank has been designed to a high specification, using high quality materials and finishes, and has recently won an industry award for sustainability.

‘The vast majority of feedback we have received from residents has been positive and we endeavour to provide the best service we can, and it is vital that we, our managing agents and residents maintain an open dialogue to ensure that all issues are addressed as quickly and effectively as possible to ensure that The Bank remains a leading choice for city centre living in Birmingham.’