Many people may pledge to donate their organs to science after their death in the hope of advancing the sum of human knowledge.

But the very much alive Cara Delevingne has donated something far more unusual to medicine: her orgasm.

The 30-year-old supermodel gave researchers a sample of her blood before and after reaching climax so they could study its effects on her body chemistry – and the results will be screened on TV this week.

Ms Delevingne agreed to the research as part of an investigation into the ‘gender climax gap’, a term used to describe why men are more likely to have an orgasm during sex than women.

Speaking outside a hospital in Germany, the bisexual model tells viewers of her new six-part documentary series Planet Sex With Cara Delevingne: ‘I’m here to have an orgasm and donate it to science.

‘I think female sexual desire has definitely been repressed. I know from my own love life just how sexual women can be so you’d think in the 21st Century men and women should be having equally satisfying sex lives, right?

‘Well, prepare for a shock. When it comes to the orgasm there is a definite gender gap.

‘To be honest I think that sounds way too high, most of my straight female friends say it’s probably more like 15 or 20 per cent.

‘Lesbians and queer women definitely seem to have it better.’ 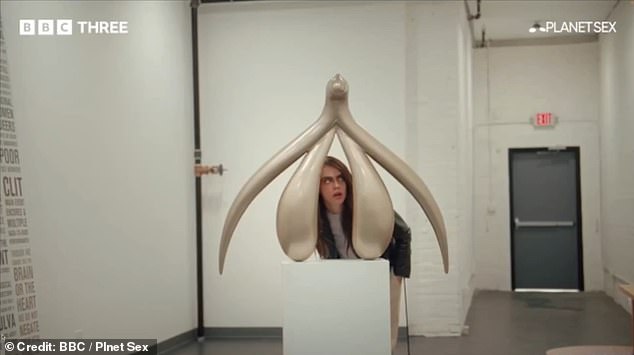 Cara has taken part in research to discover more about the ‘gender climax gap’, a term used to describe why men are more likely to have an orgasm during sex than women

The experiment measured the levels of endocannabinoids in her system before and after orgasm.

Similar to the active molecule in cannabis, the chemical reduces anxiety, increases euphoria and amplifies the pleasurable response to sex.

It’s not the only mission Ms Delevingne undertook in her quest to get to the bottom of sexuality.

She travelled to Holland to meet a sex expert, visited a film set where ‘ethical’ pornography was made, and travelled to Japan where she made a mould of her vagina. 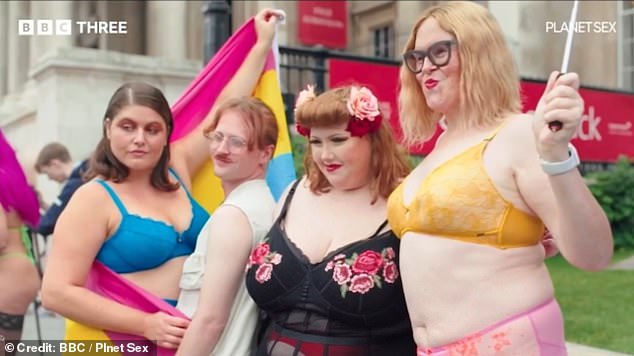 Miss Delevingne will tell viewers: ‘I do feel that generally men are not equipped with the right tools to handle women, especially sexually.

‘I get it, it’s a lot more complicated for a woman to have to tell you that you’re not doing it right, you have to sit down and listen to what I’m saying.

‘Yes it’s an ego-killer which most men can’t handle.’

Planet Sex With Cara Delevingne is on BBC3 at 10pm this Thursday.