A London delivery driver was caught licking his fingers before rubbing them on lampposts and railings in a residential street last week.

In a video taken on April 30, the man was seen walking up and down the street in Putney, southwest London and talking whilst holding his phone.

However, he then proceeded to lick his hands and wipe his saliva on the public surfaces, irrespective of the social distancing guidelines enforced in the UK due to the coronavirus pandemic.

A delivery driver (pictured) was caught licking his hands before touching railings and lampposts in a bizarre incident in Putney, southwest London 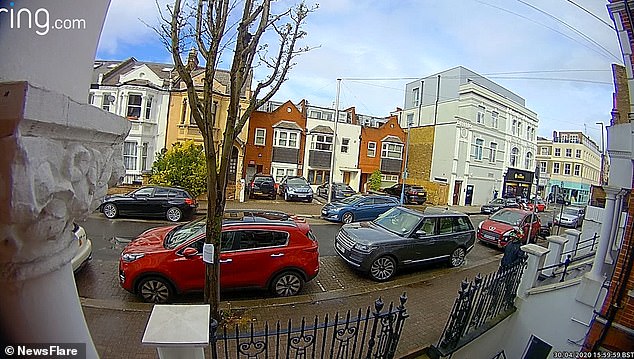 The delivery driver, who was waiting for his next order to come through, would also touch cars parked on the side of the road with his germ-ridden hands.

The resident who filmed the video, named Linda, told Newsflare: ‘The delivery drivers congregate on this road waiting to take the orders, but they aren’t practicing social distancing! And then we see them do this.

‘It’s disgusting, touching our railings and our cars after licking his hands, especially in the middle of a pandemic! We have reported them to the police.’ 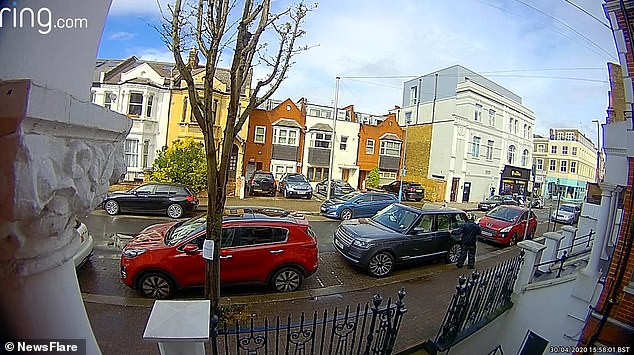 The delivery driver even touched some cars parked on Norroy Road, which is located a short walk away from Putney rail station. A resident reported the driver to the police but the matter will not be taken further as the police claim he is not taking part in a malicious attack

Police told Linda that they would not be taking the matter any further as they believed the driver was not taking part in a malicious attack.

The incident took place on Norroy Road, which is just a short walk away from Putney Rail Station. At the end of the road is a casino, which also lies on the normally busy Putney High Street.

Takeaway food deliveries remain popular in the UK despite the government asking the nation the limit the amount of social contact they have with the outside world wherever possible.