She is a magnet for attention.

And Blac Chyna, 29, showed a wildness of style when she was pap-snapped at LAX on Friday with her beau YBN Almighty Jay, who is only 18.

Chyna, a 29-year-old ex-stripper and ex-reality star, modeled a leopard print Married To The Mob hoodie and matching leggings as she made her way it through the airport.

Putting the ‘boy’ in boyfriend: Blac Chyna, 29, showed a wildness of style when she was pap-snapped at LAX on Friday with her beau YBN Almighty Jay, who is only 18

The Washington, D.C. native, who has a one-year-old daughter called Dream by Rob Kardashian, let her platinum blonde hair spill out from under her hood.

She wore a pale pink shade of lipstick that matched her nail polish, rounding off the ensemble with a pair of brown-trimmed black sneakers.

Meanwhile, that drastically younger boyfriend of hers wore a Nike hoodie and accessorized with a pendant reading: ‘ALMIGHTY JAY’.

This appearance comes after the reality star was blasted for putting pink hair extensions on her and ex Rob Kardashian’s one-year-old daughter Dream earlier this week. 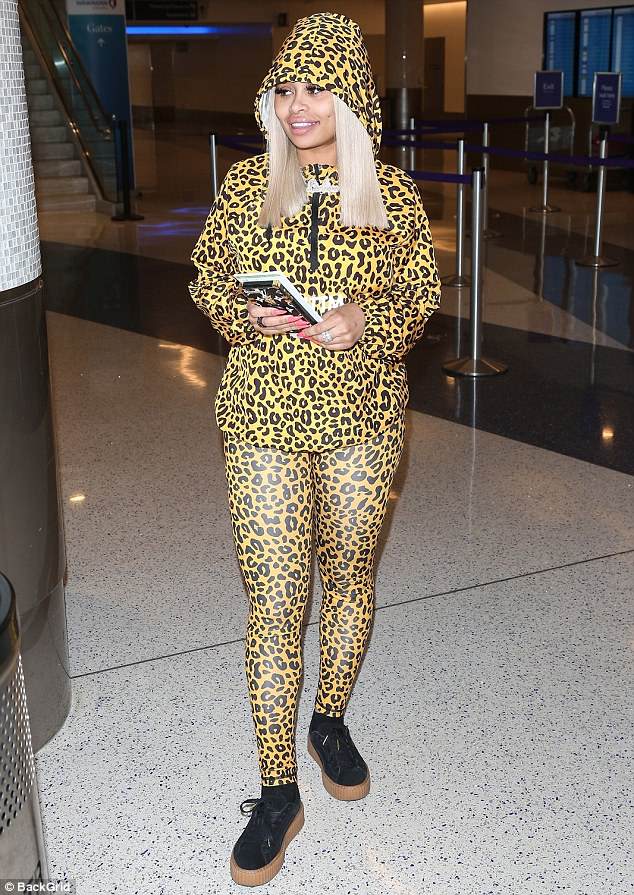 Only the best: Chyna, a 29-year-old erstwhile stripper and reality star, modeled a leopard print Married To The Mob hoodie and matching leggings as she hoofed it at the airport

Taking to Instagram, the TV personality shared the shot with the caption ‘My beautiful baby girl’, yet she was met with scorn from followers who hit out at the star for her decision to allow her to pose with the hair.

While some insisted the shot was incredibly sweet, others lashed out while also voicing concern over the reaction from her grandmother Kris Jenner and going as far as likening the tot to her previously-pink haired aunty Kim Kardashian.

Disgruntled users, wrote: ‘She’s not a toy… clip on bows?? Try again… that’s a weave!!!… Cute baby,but why the pink bow extensions… I hope this baby Ain’T gonna be like her mom… Ghetto fab … 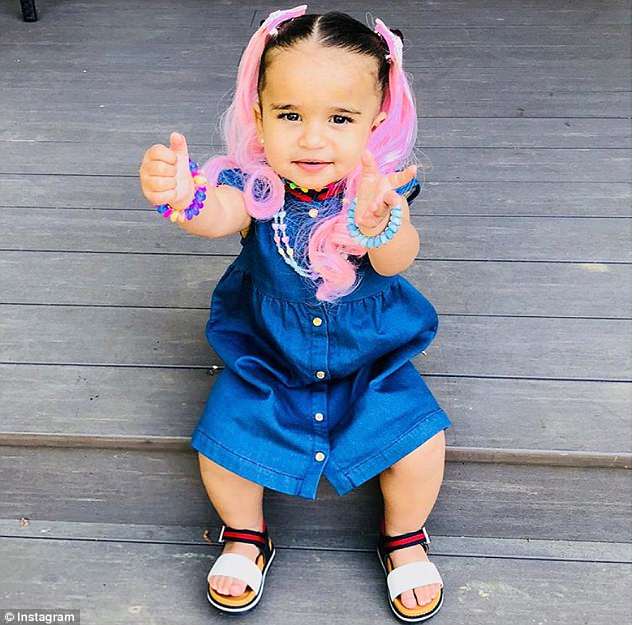 Pretty in pink: The TV personality was blasted for putting pink hair extensions on her and ex Rob Kardashian’s one-year-old daughter Dream earlier this week

‘I want to be a fly on the wall when Kris K. sees this… This is what they were afraid of lol… she put a damn weave on her baby. I’m unfollowing… Poor baby too bad hopefully she isn’t like you and your mom’.

Others however supported the star, writing: ‘Really cute this little princess… So cute Dreamy… Pretty little girl… She is so adorable… Ppl mad about clip on bows.. i even had those when i was little. They came with my dolls so i could match them.’

When approached by TMZ on the matter, Chyna defended her decision, stating: ‘They’re called baby clip ins…every little girl has them! I don’t care!’

YBN Almighty Jay, a.k.a. Jay Bradley, asked Chyna: ‘Will You Marry Me?’ on Instagram earlier this month – though it is not entirely clear whether or not he was joking.

Chyna declined to publicly respond to this message, and the fourth finger of her left hand has been bare in the intervening time, which suggests either that the proposal was just for laughs or that she turned the rapper down.

Yet judging by the fact they keep being spotted out together, the pair, who were first linked in February, have evidently kept the romance going.

This Easter, Chyna went for a jaunt with her teenage boyfriend and toddler daughter to Six Flags Magic Mountain, where their outing went operatically south.

Chyna was filmed tearing off her jacket and attempting to throw a stroller at another park-goer before being physically restrained. 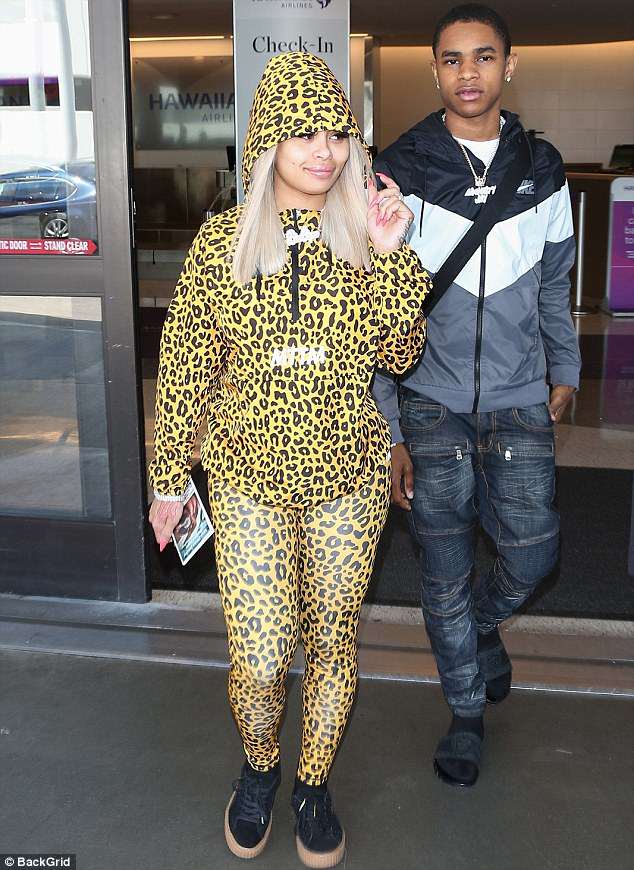 On the go: The Washington, D.C. native, who has a one-year-old daughter called Dream by Rob Kardashian, let her platinum blonde hair spill out from under her hood

After footage of the incident went viral, Chyna wrote on social media: ‘Being famous is hard enough dealing with scrutiny but when someone feels comfortable to come and touch your child it’s a whole other story.’

The woman born Angela Renée White went on: ‘I do not condone violence nor am I a violent person but shout out to all of the amazing mothers out there that will protect their children at all cost. Love, King and Dreams Mommy.’

Chyna also has a five-year-old son called King Cairo by the rapper Tyga, 28 who in a bizarre twist used to date Rob’s half-sister Kylie Jenner, 28.