Black and Asian people may be more likely to die of Covid-19 in England and Wales because many of them live in polluted areas, according to an official report.

The Office for National Statistics (ONS) today said it found a seven per cent increase in the risk of dying of coronavirus in England’s most polluted areas.

But this increase seemed to disappear when experts took people’s race into account.

The report, which admitted it was ‘inconclusive’, suggests that either ethnic minority people are more likely to die because they live in polluted cities and towns, or the opposite is true — that people in polluted areas are at higher risk because many of them aren’t white.

Numerous reports have found that black, Asian and minority ethnic (BAME) people in Britain face a higher risk than white people of dying if they catch coronavirus.

And pollution could be linked to the risk of Covid-19 death because both affect the lungs. Scientists today said it was ‘very plausible that higher exposure to air pollution will be a contributory factor’.

The ONS report said 35 per cent of people who died of Covid-19 up to June had a lung or heart disease — which can be caused by pollution — before they caught the virus.

As the virus spread further outside of polluted cities and around the country – it began in London, which has had the most total deaths – the link between pollution and deaths became weaker (illustrated as graph lines flattened) 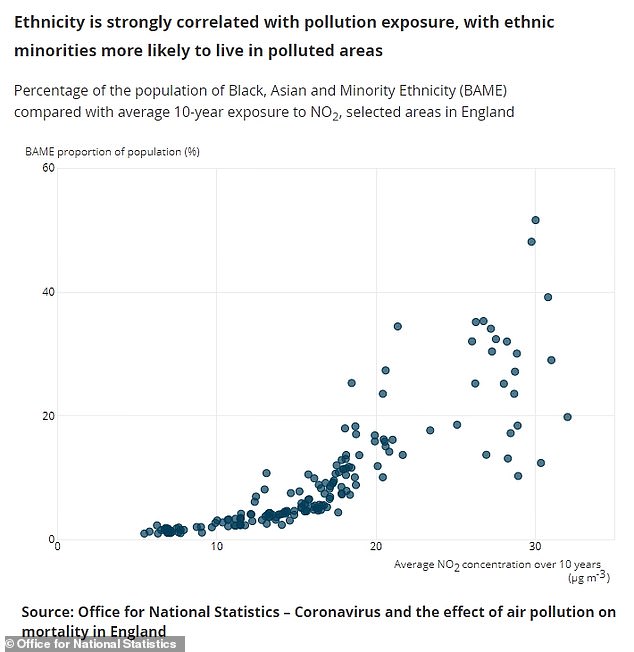 The report, the first of its kind published by the ONS, said the effect of pollution on risk of coronavirus death appeared to be smaller than previous research had suggested.

It estimated that there was a seven per cent increase in Covid-19 death risk for people who inhaled an extra one microgram per cubic metre of particulate matter over 10 years.

Particulate matter is pollution made up on tiny particles that are produced by car exhausts, friction between tyres and roads, and construction work.

The World Health Organization said no amount of PM2.5 – the smallest type of particulate matter – is considered safe, but said countries should try to keep levels below 10 micrograms per cubic metre.

Currently, the UK follows EU guidelines which are looser and suggest pollution be limited to 25ug/m3.

PM2.5 infiltrates the blood stream and lungs, irritating cells and disrupting DNA, and cause serious damage to the body if absorbed regularly over long periods of time.

The ONS report found that at the peak of Britain’s epidemic, death rates were higher in more polluted areas, typically inner London and Birmingham.

But this was also because of other factors, such as numbers of confirmed cases and the number of people living in poverty.

As the outbreak spread further outside of cities, the link between pollution and deaths became weaker, the report showed. 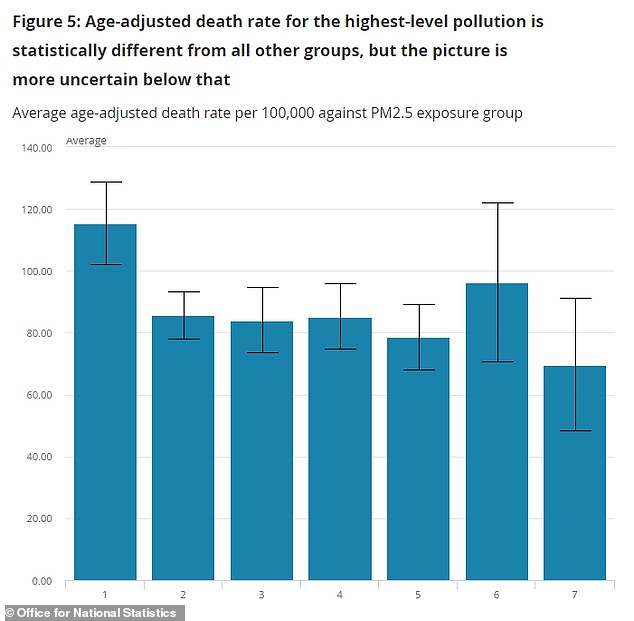 People are more likely to catch Covid-19 in areas with bad air pollution because particles can ‘carry’ the virus, scientists have claimed.

Data shows that London, Birmingham, New York, LA, Mexico city, Delhi all have high levels of pollution and have been battered by Covid-19.

Now, international researchers led by Taipei Medical University in Taiwan have claimed pollution plays a ‘direct role’ in the spread of the disease.

Viruses may be absorbed by particulate matter – produced mostly by car fumes and construction work – and then travel or linger in the air for hours or even days before being inhaled by someone, they said.

This would suggest the coronavirus is airborne, meaning people can inhale it from tiny particles in the air.

Moreover, evidence suggests particulate matter may make the cells in the lungs more susceptible to the coronavirus, increasing the risk of someone becoming badly affected.

As the more polluted — and more populated — areas had higher deaths, so too did the black, Asian and ethnic minority community.

Greater proportions of non-white people live in polluted inner city areas than white people, who are more likely to live outside of town and city centres.

The ONS report noted that pollution may contribute to the deaths of BAME people, or that BAME people may be at risk of dying because of other reasons, which made deaths higher in the polluted areas they happened to live in.

‘A range of structural differences are resulting in higher Covid-19 death rates among people of Black, Asian and Minority Ethnicity (BAME),’ the report said.

‘Air pollution exposure could be a contributing factor if it causes Covid-19 deaths, with the BAME population more likely than those of White ethnicity to live in inner city areas (that are more polluted).

‘Ultimately, our analysis is inconclusive.

‘Without controlling for ethnicity, we find long-term exposure to fine particulate matter (PM2.5) could increase the risk of contracting and dying from Covid-19 by up to 7 per cent.

‘However, when controlling for ethnicity, air pollution exposure has no statistically significant impact on Covid-19 deaths.

‘As air pollution is just one of many factors that could be driving disproportionate outcomes for minority ethnic groups, the increased risk of dying from Covid-19 (found when ethnicity is not controlled for) is likely to be an overestimate of the true effect.’

Professor Alastair Lewis, an atmospheric chemistry expert at the University of York, said: ‘The study shows that some of the early associations made between exposure to air pollution and an increased risk of Covid-19 mortality were artificially enhanced because the disease initially spread in large cities.

‘As Covid-19 became more evenly distributed through the UK over time the effect of air pollution on mortality became less pronounced.

‘The ONS analysis shows that long-term exposure to air pollution does still potentially increase the risk of mortality from Covid-19’.

He added: ‘Ethnic minority communities have been some of the most affected by Covid-19 and it is very plausible that higher exposure to air pollution will be a contributory factor.’

The ONS report comes after a paper published by Public Health England in June found that BAME Brits had a noticeably higher risk of dying if they caught Covid-19.

The PHE report revealed Britons of Bangladeshi ethnicity have around twice the risk of white Brits of dying with the coronavirus.

And it showed black people, as well as those of Chinese, Indian, Pakistani, other Asian, or Caribbean backgrounds had between a 10 and 50 per cent higher risk of death. The analysis did not take into account higher rates of long-term health conditions among these people, which experts say probably account for some of the differences. 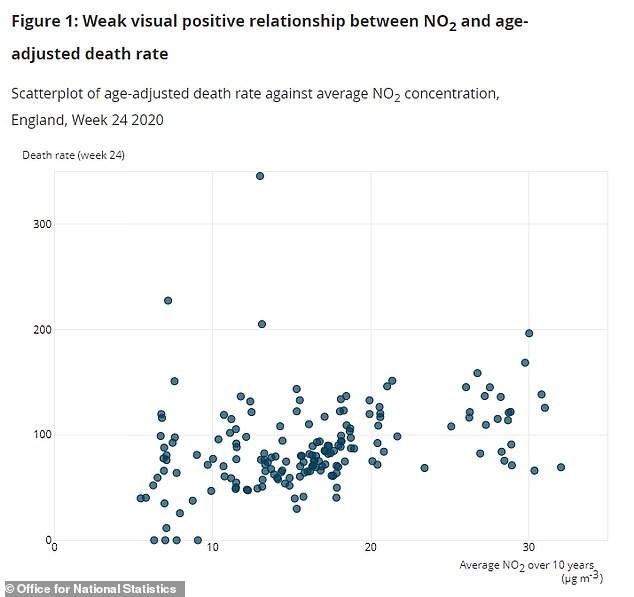 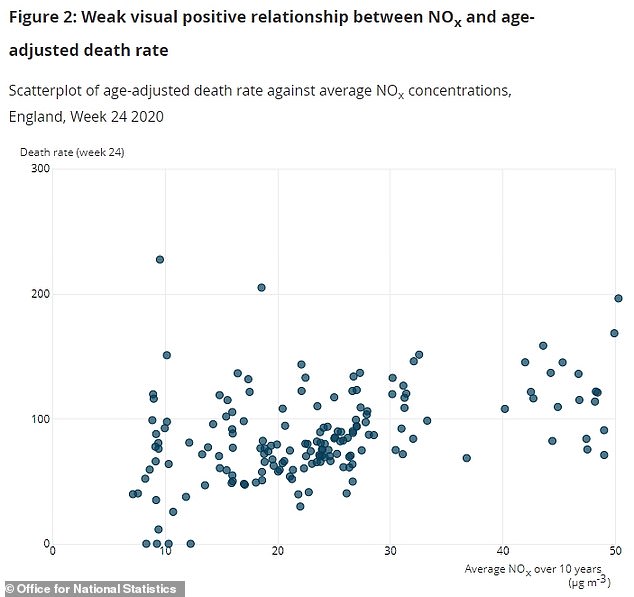 Black, Asian and minority ethnic people are no more likely to die from coronavirus than white people, a study given to government scientists has found.

Research presented to Number 10’s SAGE panel found there was no greater risk of death for Brits of BAME backgrounds when all factors were taken into account.

It showed that ‘comorbidities’ – long-term health problems – appeared to account for higher rates of hospitalisation and intensive care among ethnic minority people.

Risk among BAME communities has been a sensitive topic during Britain’s outbreak and even given rise to calls for extra protection for non-white NHS staff.

Statistics show BAME people in Britain are dying of COVID-19 at disproportionate rates, but scientists have struggled to explain why.

The research – done by scientists from the universities of Edinburgh and Liverpool – was one of around a dozen secret papers published last night by the government.

It did, however, claim BAME people did seem to be more likely to end up in intensive care in the first place.

The SAGE paper was met with scepticism, however, with one intensive care doctor saying the data it contained did not line up with what the scientists claimed.

Oxford University’s Professor Duncan Young said: ‘I’m not sure why they thought black patients were more at risk of ICU care.

‘The take-home message is that BAME patients admitted to hospital with COVID-19 are no more likely to end up in ICU nor are they more likely to die.’

Evidence compiled in the report also revealed that age is the single biggest risk factor that determines how likely people are to die with the virus – those over the age of 80 are 70 times more likely to be killed than under-40s.

And health conditions which appeared often on people’s death certificates were heart disease, diabetes – understood to be type 2 diabetes, high blood pressure and dementia. More than one in five victims had diabetes, the data showed, which was a significantly higher rate than in people who died of other causes.

Poorer, more deprived people faced a higher risk of dying and men working in lower-paid jobs – such as security guards, bus drivers and construction workers – also had worse chances of survival if they contracted the virus.

Health chiefs launched a probe to investigate the disproportionate impact of Covid-19 on BAME Brits in April, prompted by a wave of evidence that showed white people were less likely to die from the disease.

Mr Hancock admitted that the report has ‘exposed huge disparities in the health of our nation’ and his counterpart in the Labour Party, Shadow Health Secretary Jonathan Ashworth, noted: ‘Covid thrives on inequalities’.

One paper presented to government advisers in SAGE suggested that higher-than-average rates of type 2 diabetes among black and south Asian people may be to blame – the condition is known to increase risk of Covid-19 death.