Mr Selfridge’s Students: How US founder of world-famous London department store set up school for British boys and girls who worked for him in 1920s

Black and white images from the early twentieth century reveal the inner workings of a ‘continuation school’ set up by the founder of the department store Selfridges to educate his young employees.

Henry Gordon Selfridge invested £400,000 of his own money in opening a department store at the then-unfashionable west end of Oxford Street after visiting London from his native Wisconsin, USA.

Selfridges & Co opened its doors in 1909 and went on to become a household name, with Selfridge chairing the company until his retirement in 1941.

With a keen interest in education and science, he decided he wanted his own school to offer the young boys and girls who worked for him a better education.

The Selfridges continuation school opened in 1925 and catered for male and female pupils from 14 to 18, teaching a wide range of classes from reading and writing to cookery, cleaning and sewing.

Department store founder Harry Gordon Selfridge started his own continuation school to educate young people who worked at the firm, when the school leaving age was as young as 12 in Britain. A boys’ literature class at the school in London is pictured in February 1920 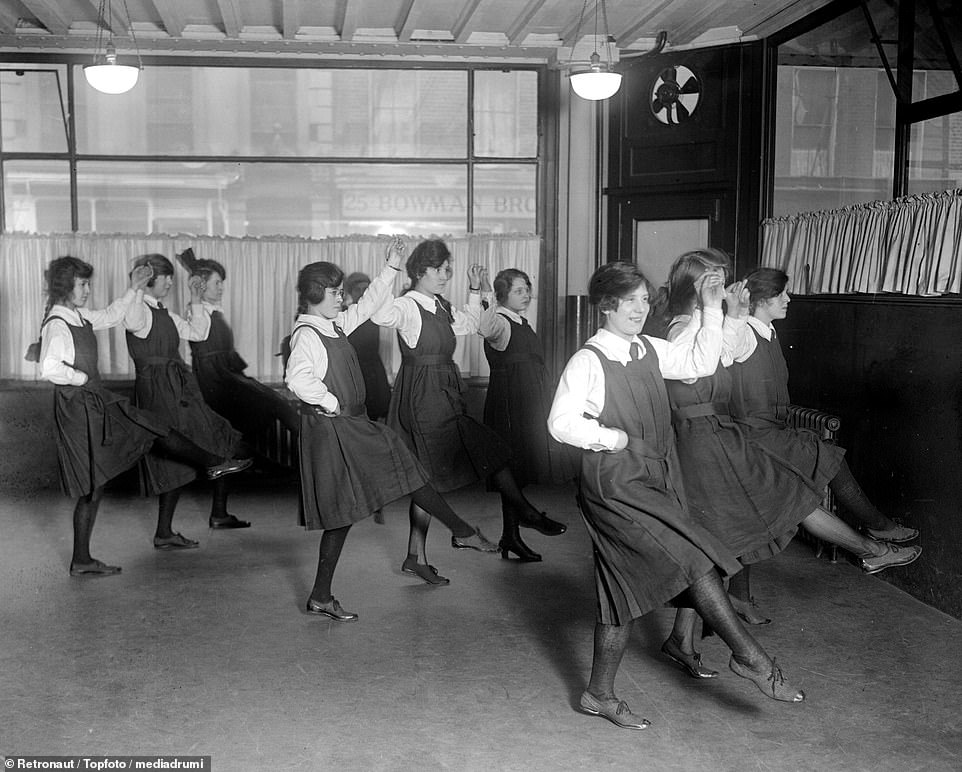 The Selfridges continuation school catered for boys and girls, who wore matching uniforms, as seen here. A ‘physical culture’ class for female pupils, who all worked for the company, is pictured in February 1920 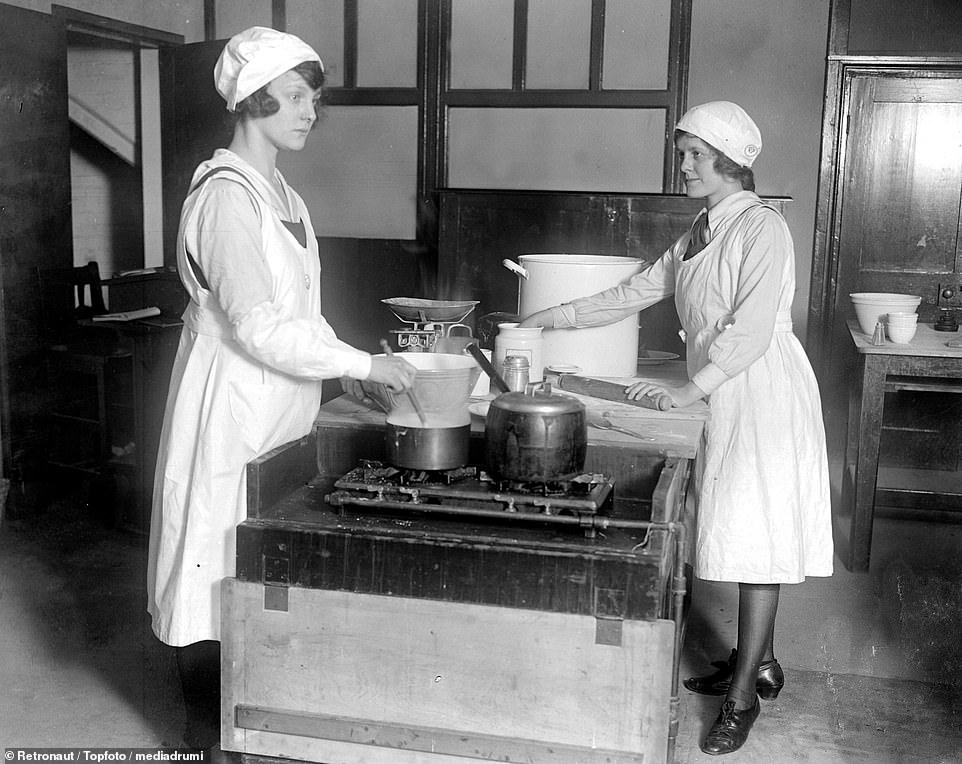 Two girls who worked for Selfridges in London are pictured taking part in a cookery class at the department store’s continuation school in February 1920. It was set up by founder Henry Gordon Selfridge to improve levels of education for young people working for his firm 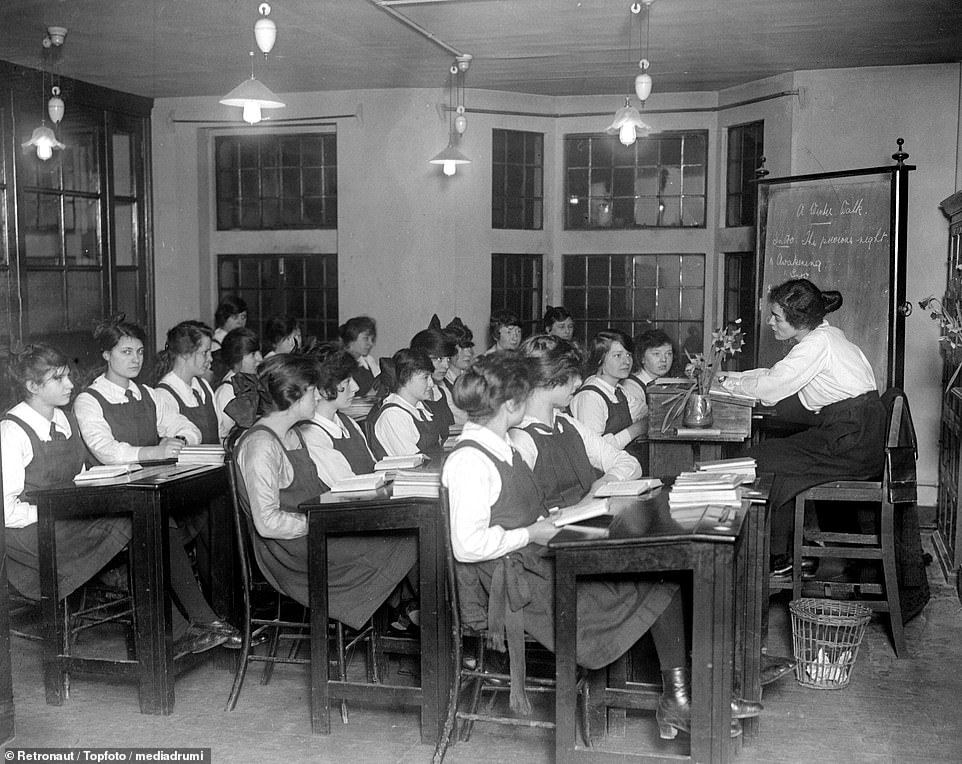 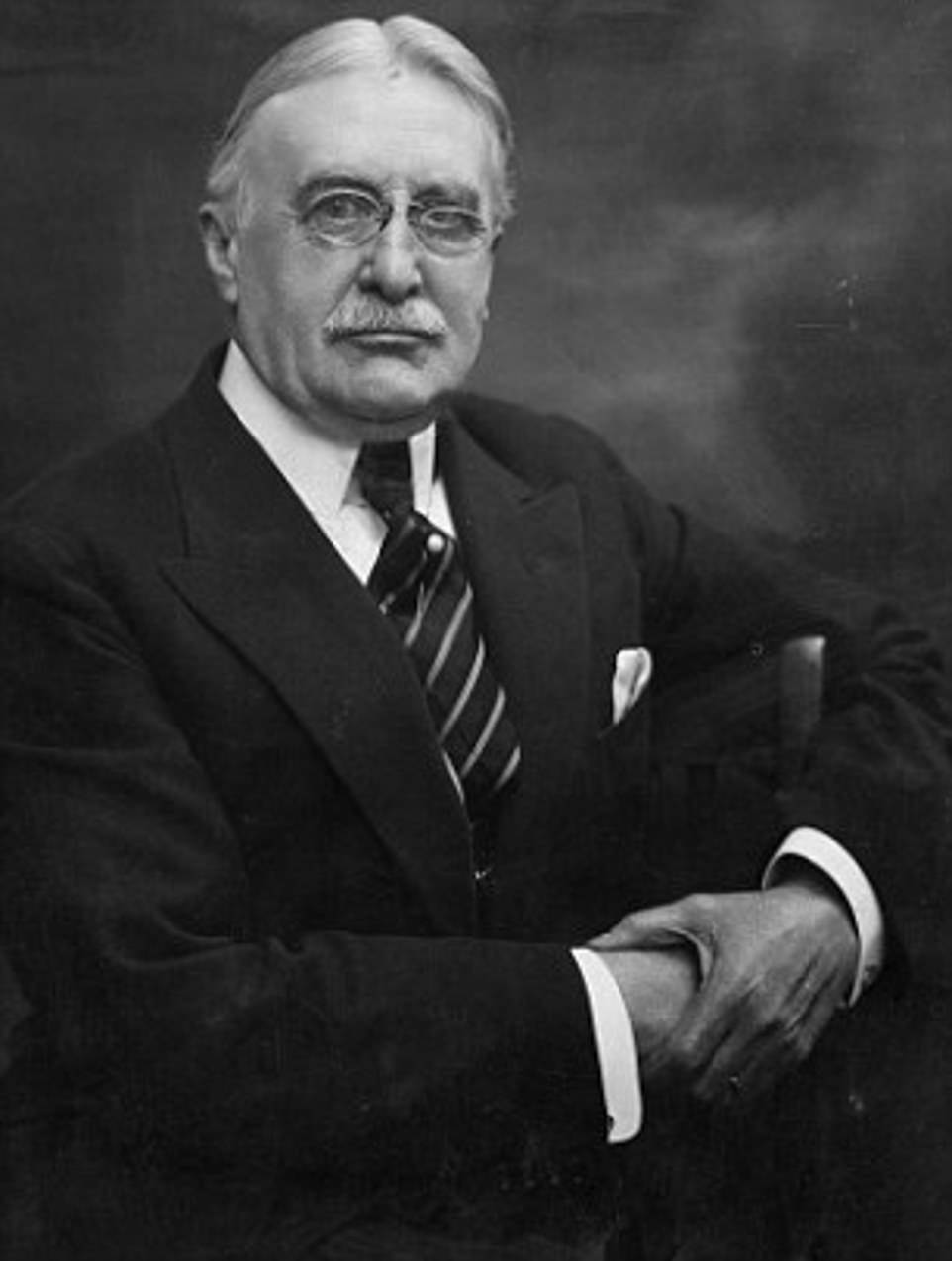 Henry Gordon Selfridge (pictured) invested £400,000 of his own money in opening his own department store at the then-unfashionable west end of Oxford Street in 1909 after visiting London from his native Wisconsin, USA

The school was founded at a time when the school leaving age for children in Britain was 14, raised from just 12 by the Education Act of 1918.

Although youngsters were allowed to leave school at 14, they were obliged to attend ‘continuation schools’ part-time until they were 18.

Images from Selfridge’s classes from 1920 show girls studying books, learning how to do laundry and taking part in ‘physical culture’ classes.

Henry Gordon Selfridge was the feature of the ITV drama Mr Selfridge, which saw him played by the American actor Jeremy Piven. 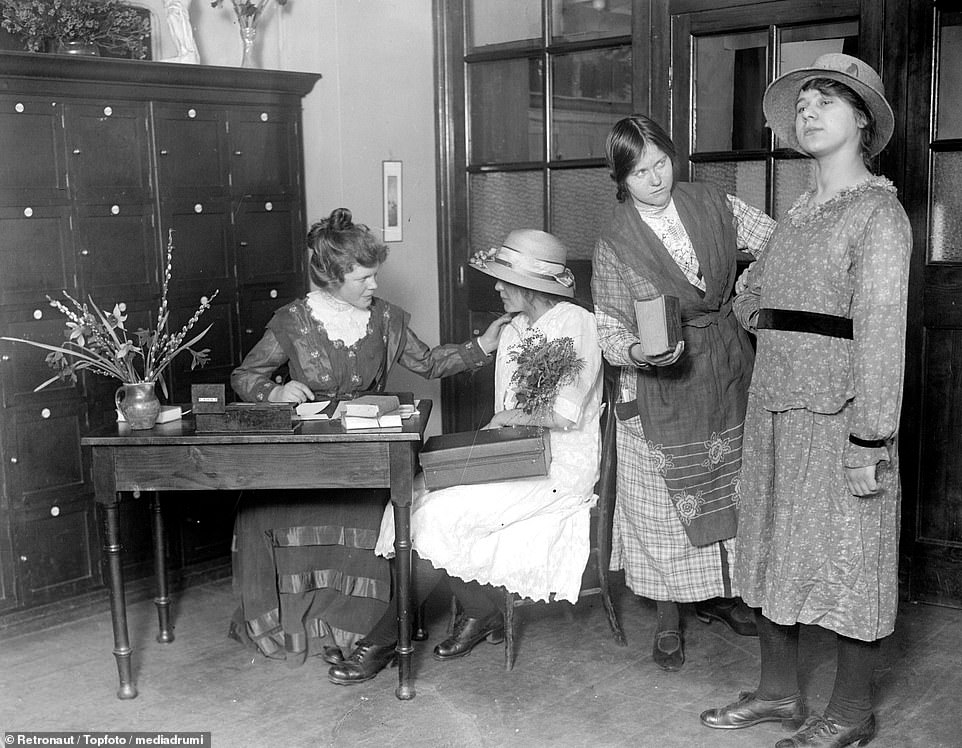 Classes at the Selfridges school didn’t just cover reading and writing. Pupils were encouraged to participate in the arts as well. Pictured is a drama class for female pupils from February 1920 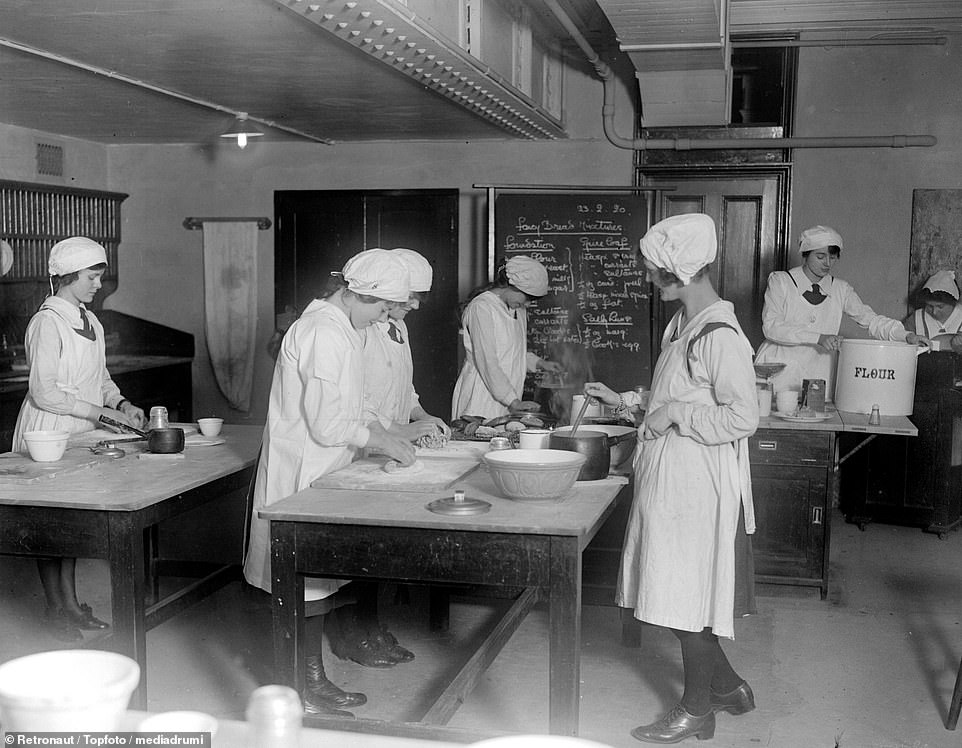 Henry Gordon Selfridge founded the continuation school to cater for his employees and the curriculum was a broad range including practical and academic subjects. Pictured is a female-only cookery class in February 1920 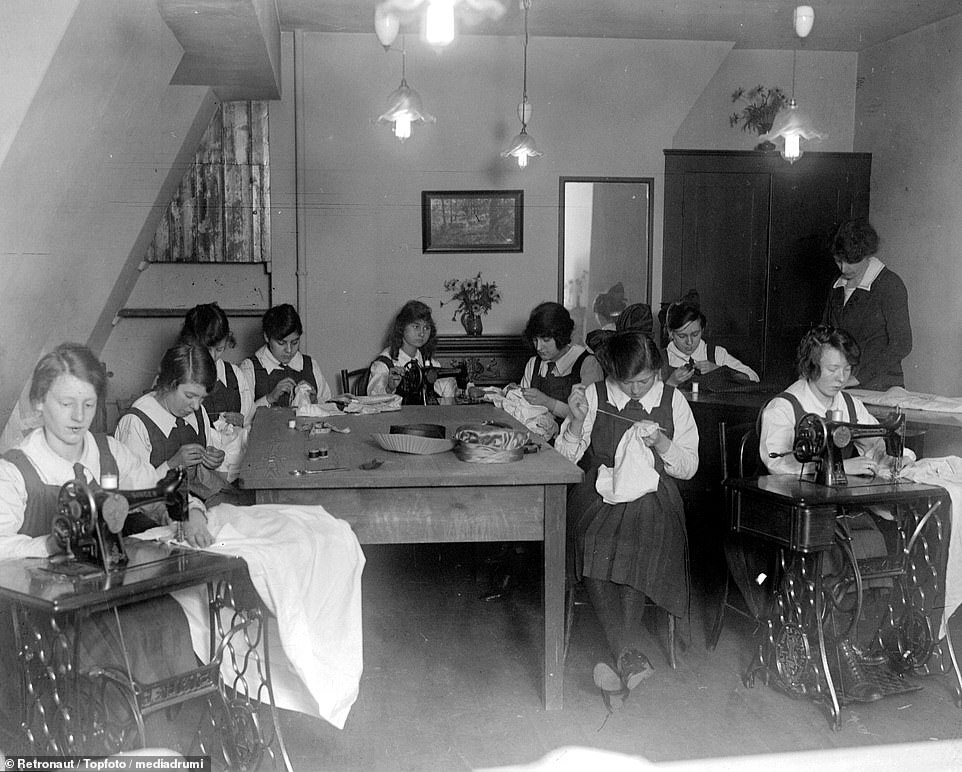 Sewing class: Girls employed by Selfridges department store in London are pictured attending the Selfridges continuation school in February 1920. The picture was taken two years after the Education Act raised the school leaving age from 12 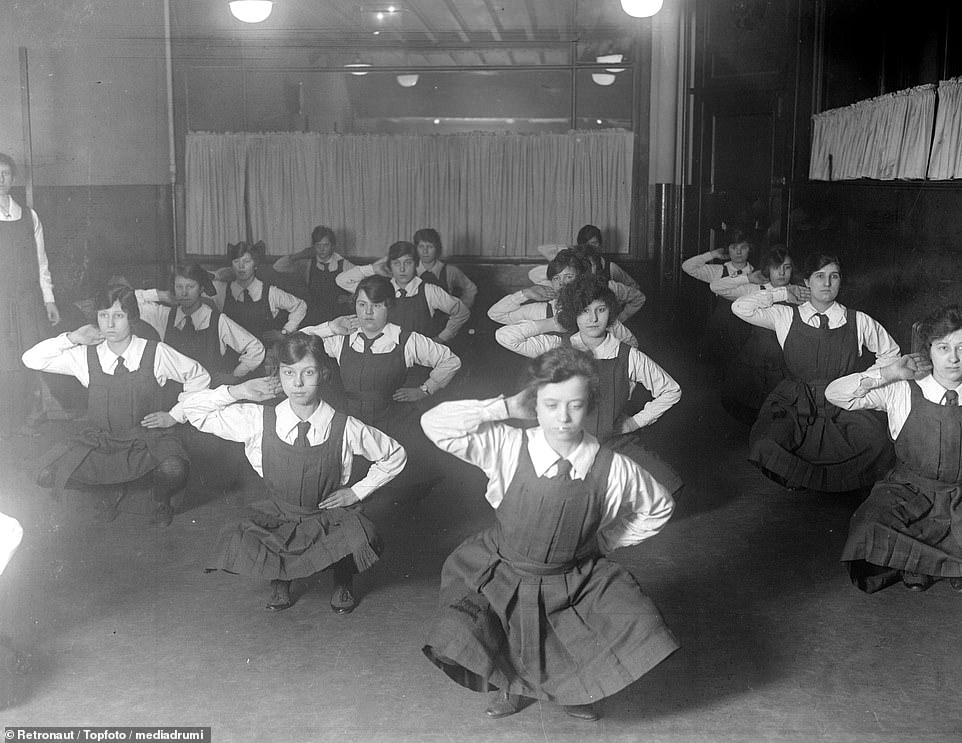 Strike a pose: A ‘physical culture’ class at the Selfridges continuation school for young employees is pictured in 1920 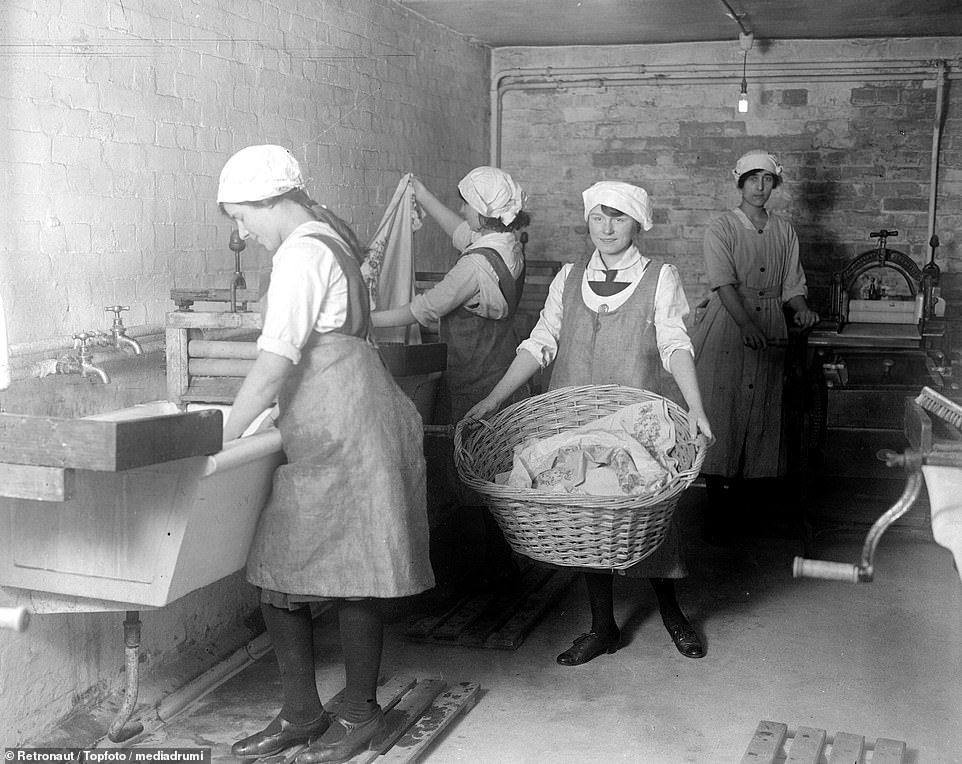 Department store founder Harry Gordon Selfridge wanted to give the young people who worked for him a well-rounded education. As well as reading and writing, female pupils were equipped with practical skills such as cooking and cleaning. This is an example of a ‘laundry’ class from February 1920 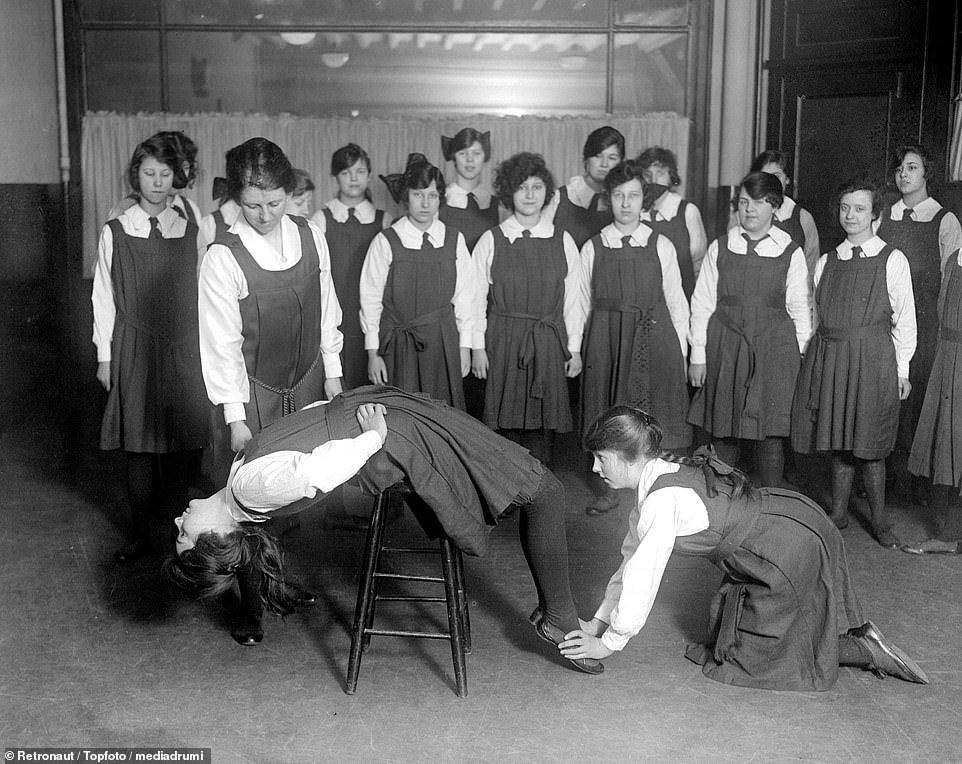