Ecological park visitors in northern Mexico were caught by surprise when a very friendly black bear approached them.

The tourists appear in a video milling around and talking among themselves while two bears hunt for food near some garbage cans at the Chipinque Ecological Park in Monterrey on Saturday.

The group heed the advice of a woman, who then tells them to remain calm and let them pass by as the bears continue to roam the area. 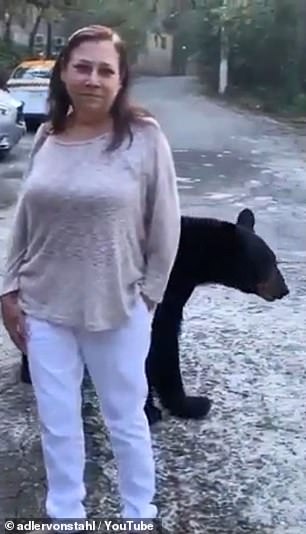 Tourists visiting the Chipinque Ecological Park in Monterrey on Saturday received an unexpected visit from a black bear, who playfully stroked a woman’s (left) hair

Subsequently, one of the wild bears headed straight to where the park visitors where standing while they other bear kept looking for some leftovers to feed itself.

The bear then approached a woman from behind and stood upright. 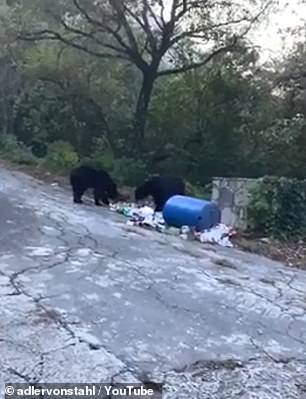 Visitors at Chipinque Ecological Park in Monterrey, Mexico, are warned not to make direct contact and not to feed them

The wild animal then turned towards her and sniffed her sweater and attempted to to tap her leg before she tried to move away as the video came to an end.

Moments after the video went viral on social media networks, the Santa Catarina Civil Protection took to its Twitter account and shared a couple of tips in the event that park visitors encountered any bears in the area.

‘Don’t come near them, don’t bother them and keep food away. Don’t feed them or throw food at them, and please don’t hit them,’ the notice said.

It also warned tourists at Chipinque Ecological Park not ‘to photograph or video record them’ and asked them not to leave any trash behind and not to remove it from the grounds.