A black doctor has claimed that she and her now-fiance were racially profiled while he was attempting to propose to her at a New York brewery.

On Sunday, the group decided to drive more than an hour from Manhattan to Walden, New York, to visit the Angry Orchard brewery.

Hamlet, 32, explained in a lengthy Facebook post that at the brewery Jackson had ‘walked me out to an empty table on the lawn’ and was getting ready to propose when a security guard approached the couple.

Hamlet said the woman then asked to check Jackson’s back pocket because she was told that he stole a t-shirt from the gift store.

‘My boyfriend then emptied all of his pockets, while still trying to keep the ring box hidden from my sight. She then walked away, and my boyfriend and I sat down at the table and he began his proposal speech,’ Hamlet said.

Cathy-Marie Hamlet (left), 32, has claimed that she and her now-fiance, Clyde Jackson (right), 40, were racially profiled while he was attempting to propose to her at a New York brewery 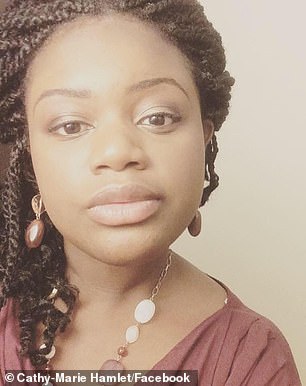 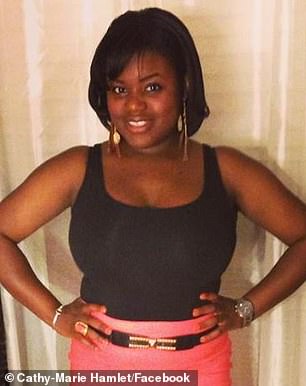 Hamlet, her fiance and six of their friends spent the weekend celebrating Jackson’s 40th birthday. On Sunday, the group decided to drive more than an hour from Manhattan to Walden, New York, to visit the Angry Orchard brewery 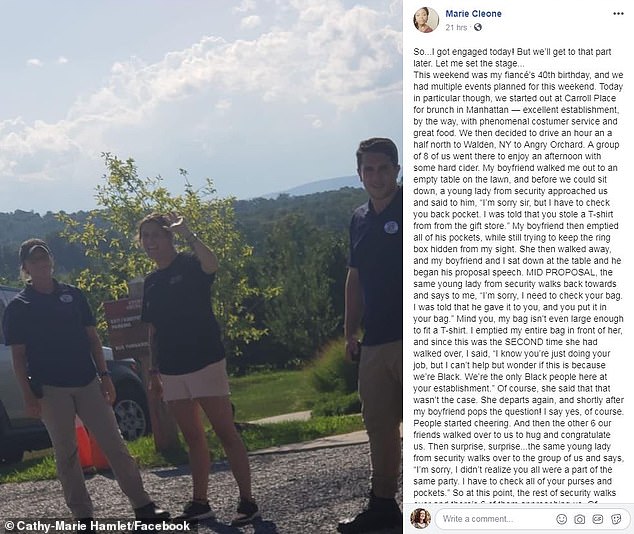 While there Hamlet, 32, explained in a lengthy Facebook post that Jackson was in the middle of his proposal when security guards (three pictured) interrupted him and accused him of stealing a t-shirt

‘MID PROPOSAL, the same young lady from security walks back towards [us] and says to me, “I’m sorry, I need to check your bag. I was told that he gave it to you, and you put it in your bag.”

‘Mind you, my bag isn’t even large enough to fit a T-shirt. I emptied my entire bag in front of her, and since this was the SECOND time she had walked over, I said, “I know you’re just doing your job, but I can’t help but wonder if this is because we’re Black. We’re the only Black people here at your establishment.”‘

Hamlet said once the security guard denied that claim and walked away. Her boyfriend finally managed to pop the question, she said ‘yes’ and all of their friends started cheering before walking over to congratulate them.

That’s when the security guard came back over to the group to tell them that she needed to check their bags as well because she didn’t realize they were all together.

‘So at this point, the rest of security walks over and there’s 6 of them approaching us. Of course my friends told them none of us stole a T-shirt from their establishment, at which point they started getting aggressive and saying that not only them, but also patrons saw my boyfriend steal the shirt and/or transfer it to me to put in my bag!!

One security guard told her co-worker to call police on the group, claiming that she saw them steal the shirt.

‘I asked them, “Do you have security cameras here?” And they said yes. So I said, “Well then you need to go and roll back your tape and see that nobody here stole anything from you guys,”‘ Hamlet recalled.

She said the guards then started taking photos and recording video of the group. 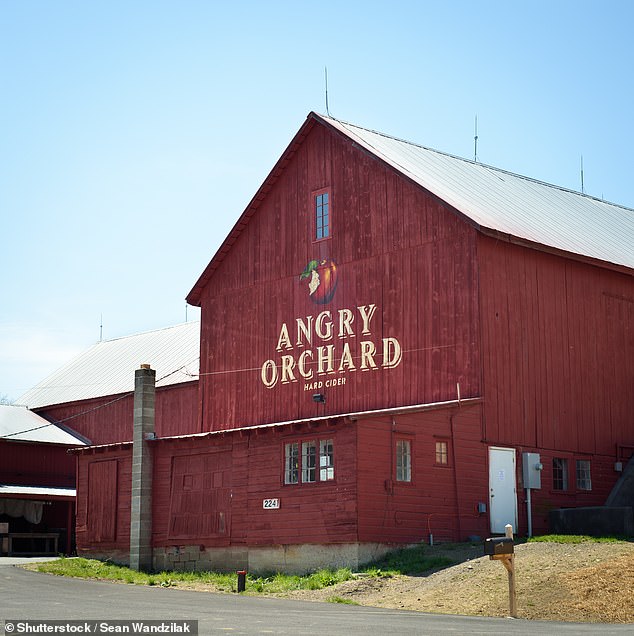 Taylor Roy, a senior communications specialist at Boston Beer Company, which owns Angry Orchard (file image) said: ‘We reached out and spoke directly with the guest involved to express our apology and offer to make it right’

Hamlet said they decided to leave ‘rather than be attacked by the multiple security guards of Angry Orchard’.

‘I have never been so humiliated in my life, myself and some of my friends left Angry Orchard in tears. On what was supposed to be one of the best days of my life, I was chased out of Angry Orchard by security who followed us all the way to the parking lot,’ Hamlet said.

Hamlet then called for Angry Orchard to ‘ROLL BACK THEIR SECURITY FOOTAGE on July 21st, 2019 because they owe all 8 of us an apology’.

‘Angry Orchard if you don’t want Black People buying your product or frequenting your establishment, then maybe put a sign on the door so that we know we are not welcome. I love hard cider, but Angry Orchard will never touch these lips again.’

Hamlet also shared a photo of a few of the guards as ‘some of the security happily waving us goodbye in the parking lot as we exited’.

A DailyMail.com request for comment sent to The Boston Beer Company, which owns Angry Orchard, was not immediately returned.

However, in a statement to People, Taylor Roy, a senior communications specialist at Boston Beer Company, said: ‘We reached out and spoke directly with the guest involved to express our apology and offer to make it right.

‘Our security team approached a group of guests based on what they thought was credible information at the time. We believe that we mishandled the situation and we’re now working on additional training for our team to prevent something like this from happening in the future.

‘We’re deeply sorry. The situation didn’t reflect our values of respect and creating a welcoming environment for our guests,’ the statement reads.

Roy did not say whether or not the workers were terminated.