By Black Dog for The Mail on Sunday

Never one to mince his words, veteran Labour backbencher Paul Flynn, who died last Sunday at 84, was characteristically blunt during an all-too-brief spell on Jeremy Corbyn’s top team in 2016.

Witnesses recall that on attending his first-ever Shadow Cabinet, Flynn turned to Corbyn and said: ‘Thanks for appointing me but I still don’t think you should be leader.’

Labour backbencher Paul Flynn died last Sunday at 84. On attending his first ever Shadow Cabinet, he turned to Corbyn and said he should not be leader

Leftie Labour wags snigger that the Independent Group’s name – chosen by ‘traitor’ MPs like Chuka Umunna – will be mistaken for the Independent Talent Group, a showbiz agency used by actors including 007 star Daniel Craig.

‘I bet Chuka even fancies himself as Craig’s successor in the role,’ sniped a Corbynista.

‘After all, his suits are even sharper than Bond’s.’

As much as they loathe ‘super-smooth’ Chuka, diehard Labour Lefties reserve special hatred in their hearts for fellow defector Chris Leslie.

‘He’s been going around for months saying he was jumping ship because he’d realised he’d never be Labour leader,’ snarled one Corbyn loyalist.

‘Some of us could have told him that years ago.’

After belting out a few Broadway classics with Rudd at a private party, Gove declared she had ‘a very good voice’ if not quite in the ‘Ted Heath category’ for musical ability. 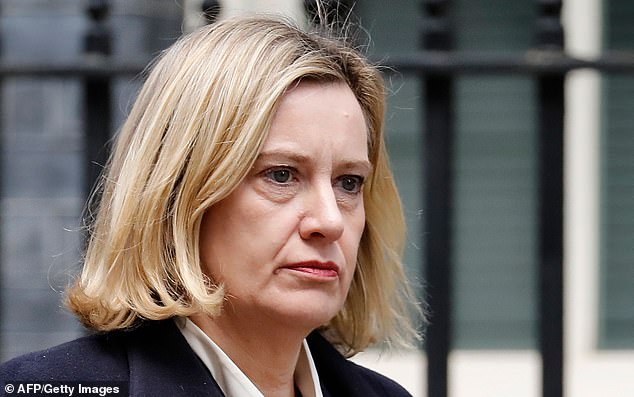 Environment Secretary Michael Gove declared Amber Rudd, above, had ‘a very good voice’ if not quite in the ‘Ted Heath category’ for musical ability [File photo]

Dog can’t wait to hear their rendition of The Impossible Dream – or how Theresa May gets a Brexit deal.

Fresh from hosting an informal ‘hustings’ for Boris Johnson to make his leadership pitch, ex-Tory leader Iain Duncan Smith has invited Boris’s arch foe Jeremy Hunt to set out his ‘one nation’ credentials to his Centre For Social Justice think tank.

‘IDS regards himself as kingmaker,’ says a source. ‘And he could be back in the Cabinet before you know it.’

‘When he was our ambassador in Afghanistan, he spent so long hanging out with US generals that he copied all their mannerisms – including a ridiculous upright, straight-armed power walk à la John Wayne,’ said one Whitehall insider.

British MPs have been crying foul after crashing to defeat in the annual rugby match with their French parliamentary counterparts.

‘We tried to play fair but they resorted to gouging eyes and kicking shins,’ said one bruised Brit. Just like the Brexit talks then.

‘Good timing, just as the Tory Party appears to be splitting apart at the seams,’ sighed a party colleague.