By Sean Poulter, Consumer Affairs Editor For The Daily Mail

Black Friday sales are expected to last all the way to Christmas – as retailers battle a fall in the number of shoppers.

Many towns and retail parks were quiet yesterday, despite Black Friday reductions of up to 80 per cent.

Footfall is expected to drop by over 4 per cent this weekend compared to last year – and is unlikely to be offset by a rise in web purchases.

Leeds: The trinity shopping centre yesterday morning on Black Friday in Leeds. There appeared to be no queues outside before the shops opened

As a result, retail analysts believe the much-hyped price cuts of Black Friday and Cyber Monday are expected to be extended.

Jason Gordon, a consumer analyst at Deloitte, said: ‘This weekend’s extended Black Friday promotions are not the end, and we are likely to see a continuation of discounting throughout the run up to Christmas.’

Natwest has apologised to customers after its online banking and mobile app crashed on Black Friday.

Customers reported issues at around 9am yesterday – and it is understood the problem was not fixed until 5.30pm. It left workers waiting for wages as employers could not make transfers on the last payday before Christmas.

It comes just days after Which? revealed the bank had suffered 14 IT glitches in 12 months. NatWest said it is investigating the cause of the issue and apologised for the inconvenience.

Amazon officially ended its eight day ‘biggest ever’ Black Friday sale at midnight last night – but it has already been superseded by new price cuts.

At the same time, deep discounts will continue to be offered by online ‘fast fashion’ chains such as Boohoo and ASOS, as well as eBay.

Other retailers such as Currys PC World, AO.com, Gap, Boots and department stores will be running offers or flash sales even though Black Friday has been and gone.

Nitin Passi, the founder of online fashion brand Missguided, said many retailers are in the midst of aggressive discounting, adding: ‘It is a bit of a bloodbath out there.’

Research by PricewaterhouseCoopers found well known chains have been closing outlets at a record 16 a day in the country’s most popular town centres.

The crippling effect of sky-high business rates coupled with parking charges and a dramatic shift to online retailers is ripping the heart out of many communities.

Retail intelligence experts Springboard are predicting a 4.5 per cent decline in shopper footfall over the Black Friday weekend. 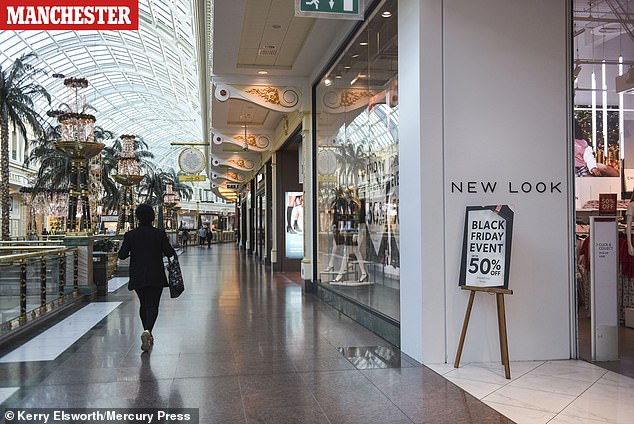 Manchester: There were no queues at Manchester’s Trafford Centre before the shops opened yesterday morning

But the web retailer trade body, the IMRG, also believes internet purchases over this period could rise by 2-3 per cent on last year – the lowest growth since Black Friday came to the UK in 2010.

It warned the figures could be even worse, saying: ‘There seems a very real possibility that sales could well be flat or even negative.’

Some estimates suggest UK shoppers will spend £8.75billion over the Black Friday weekend, which equates to around £2.5million a minute.