Black Lives Matter protesters take to the streets of London

Black Lives Matter protesters took to the streets of London today and promised more demonstrations across the UK tomorrow after the death of George Floyd in America.

Protests over Floyd’s death, who suffocated when a Minneapolis police officer pinned him down with a knee on his neck, spilled into violence in 30 US cities last night, with widespread looting and arson seen in Floyd’s hometown and nearby St.Paul.

Buses and cars travelling along Rye Lane in Peckham were forced to a standstill this afternoon when hundreds of Black Lives Matter protesters furious at the slaying of Floyd descended on the main road.

Today’s protests were a precursor to a series of demonstrations planned for the next week across Britain by the BLM movement.

As well as London, protests have been lined up for Birmingham, Manchester, Cardiff and Glasgow.

Videos posted on social media show groups shouting ‘no justice, no peace’ as they marched.

Handout photo courtesy of Liam Rezende@LiamRez, of people walking along Rye Lane, Peckham in south London during a Black Lives Matter protest, after the death of black man George Floyd in Minneapolis this week, in the US which has seen a police officer charged with third-degree murder 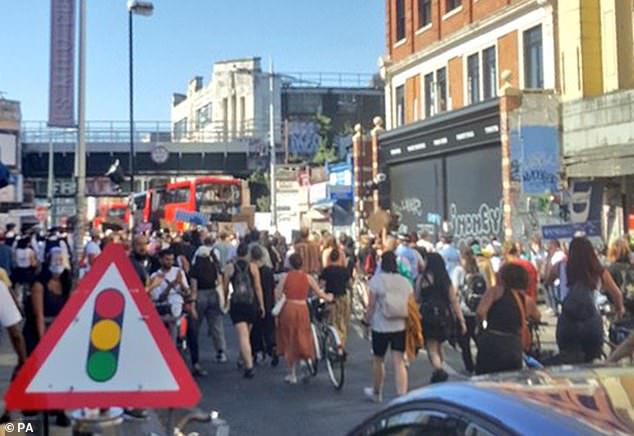 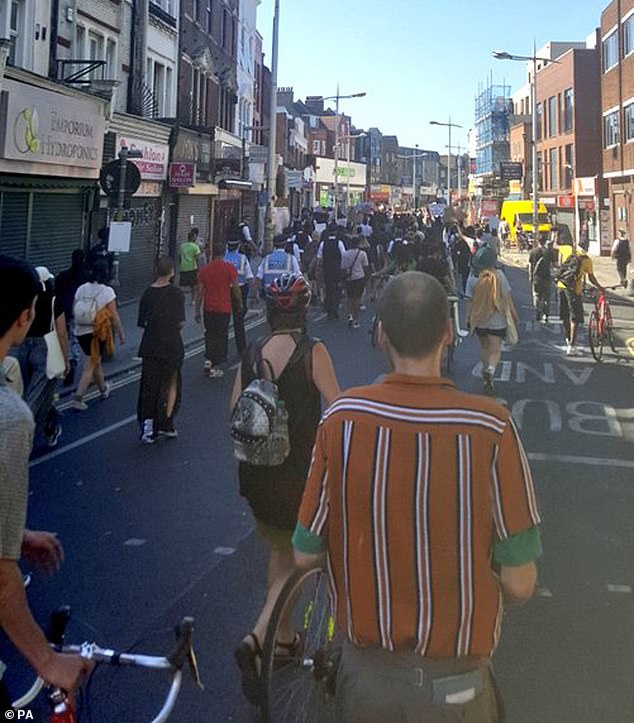 Handout photo of people walking along Rye Lane, Peckham in south London during a Black Lives Matter protest, after the death of black man George Floyd in Minneapolis this week, in the US which has seen a police officer charged with third-degree murder

In another, the demonstrators shout: ‘The UK is not innocent’.

Some of those attending were seen carrying placards reading ‘BLM [Black Lives Matter]’ and ‘solidarity’, while others appeared to call for riots, like those seen in America over the past few days.

‘RIOT is the language of the unheard’, one placard read.

Footage of another protest in North London shows demonstrators carrying a banner reading ‘abolish the police’.

Most of those attending in both protests were not adhering to social distancing guidelines and many were seen without face masks.

Tomorrow, the group will descend on Trafalgar Square in central London where demonstrators will kneel.

‘We are doing this to place pressure on the American government and show that this is a world wide issue,’ a banner from the event reads.

Another is booked for next week in front of the US embassy to ‘bring justice for the multiple black people who have been killed and harmed by the police’.

All of the banners remind attendants to wear face masks and maintain social distancing due to the ongoing coronavirus pandemic. 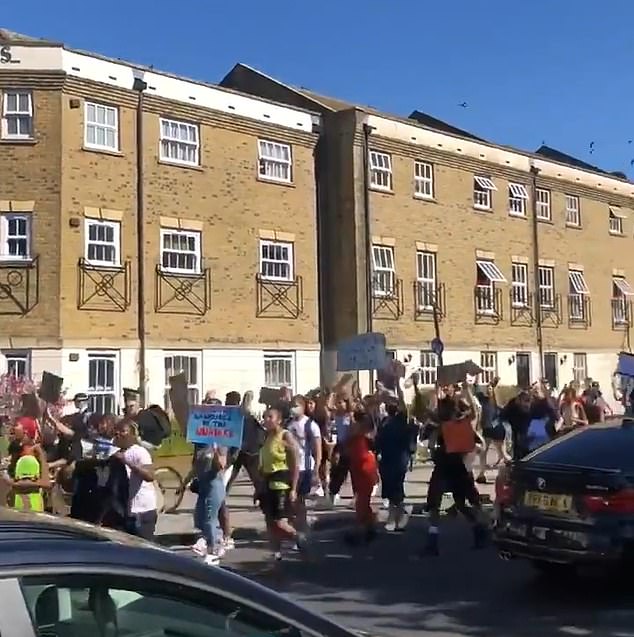 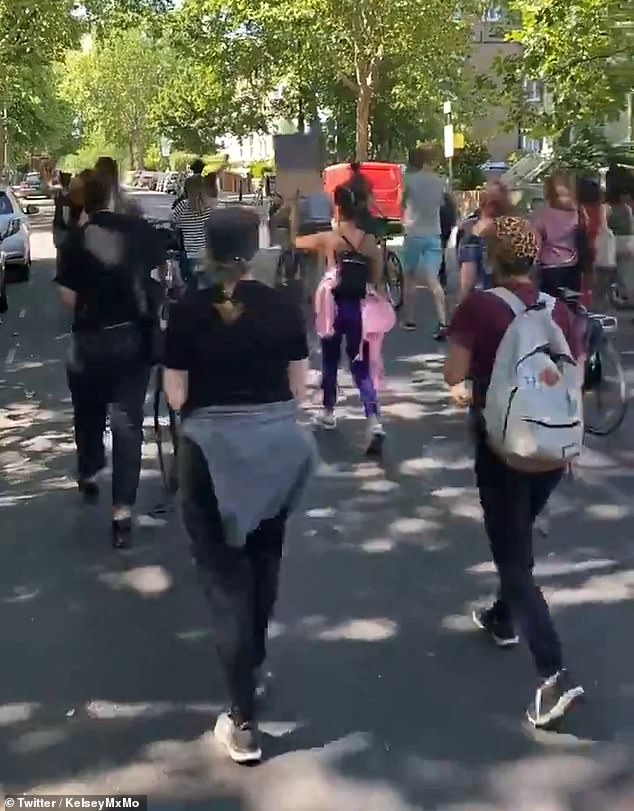 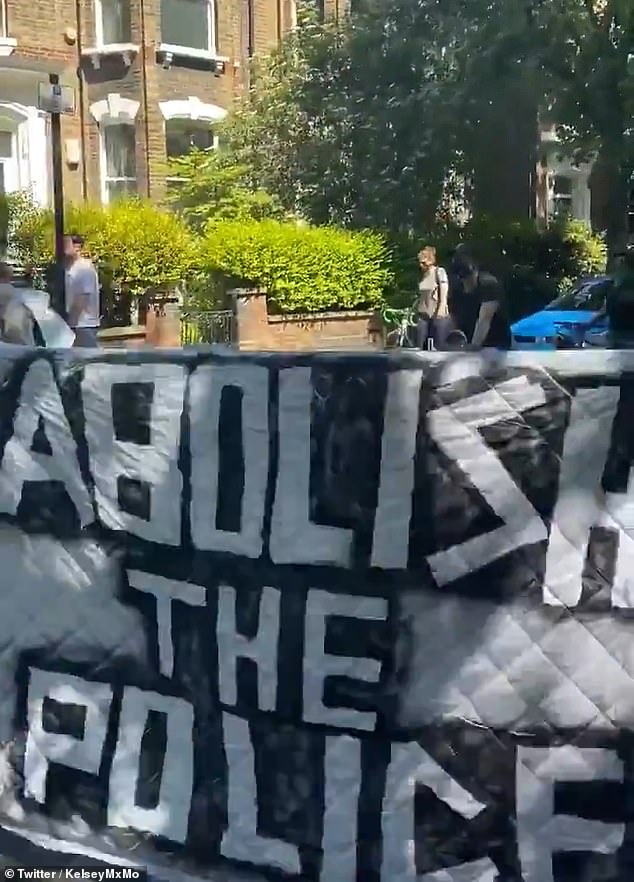 People hold a banner saying ‘abolish the police’ during a protest against the death of George Floyd in Minneapolis, in North London today

Floyd’s death in Minneapolis followed that of Ahmaud Arbery, a 25-year-old unarmed black man who was shot dead by two white men in Georgia earlier this month, and Breonna Taylor, a 26-year-old black woman who was fatally shot by Louisville cops in March.

The killings have reignited tensions between law enforcement and the black community in the US after a white Minneapolis cop Derek Chauvin was filmed kneeling on the 46-year-old’s neck until he passed out and later died.

Last night, the chaos in Minneapolis was mirrored in cities across the nation on as National Guard units were called into Atlanta and put on standby in Washington DC, and two people were fatally shot in separate incidents in California and Detroit.

Meanwhile, a 19-year-old protester was shot dead in Detroit last night when an unknown subject fired into the crowd.

In Washington DC, police and Secret Service agents were out in force around the White House before dozens of demonstrators gathered across the street in Lafayette Square chanting, ‘I can’t breathe,’ the words Floyd struggled to voice before he died.

The angry crowd at the White House grappled with Secret Service agents and attempted to breach their line of barricades surrounding the executive residence.

The crowd of hundreds chanted ‘No justice, no peace’ and ‘Say his name: George Floyd.’