Black Lives Matter protesters have hit the streets in Sydney for the second weekend in a row – with other Australian cities also seeing continued protests.

Crowds could be seen in Sydney on Saturday holding placards bearing messages such as ‘Free the Refugees’ and ‘Solidarity not Silence’ as they marched through the streets.

A separate protest held on Friday night in the CBD was dispersed by police officers.

A protestor looks on at Sydney Town Hall on June 13, 2020 in Sydney, Australia 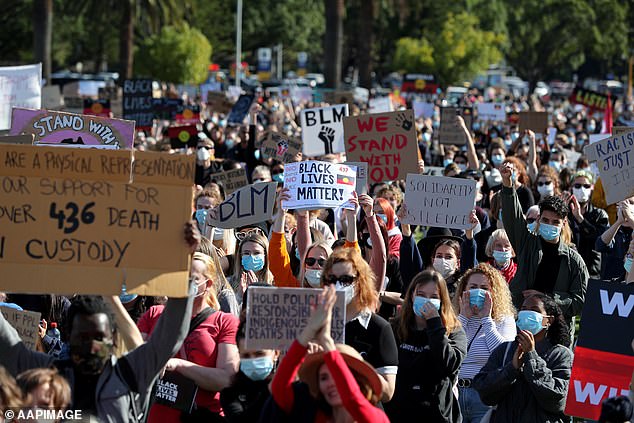 The rally was organised to also protest against the detention of refugees in Australia.

The ruling to ban the protest, NSW police have the power to arrest and prosecute attendees for breaking a current COVID-19 health order which bans mass gatherings.

Thousands of people across Australia attended Black Lives Matter protests on Saturday wearing masks and practising social distancing amid warnings from state leaders to call off the events on fears of a second wave of coronavirus infections.

The rallies, dominated by a heavy police presence, were mostly peaceful. Protesters marched on the streets or gathered at public parks carrying posters that said ‘No Justice, No Peace’ and ‘Sorry For The Inconvenience, We Are Trying To Change The World.’

Perth saw the largest gathering of all major Australian cities on Saturday, despite pleas from the premier of Western Australia (WA) state, Mark McGowan, to cancel the event until the coronavirus pandemic was over.

‘There have been people like my dad and Aunty Mingelly who have been pushing for change since they were my age – you know that was 50 years ago,’ Jacinta Taylor, an organiser of the protest in Perth, told the rally.

‘I don’t want to be having to be 80 years old and pushing for this kind of change for my children and my children’s children. 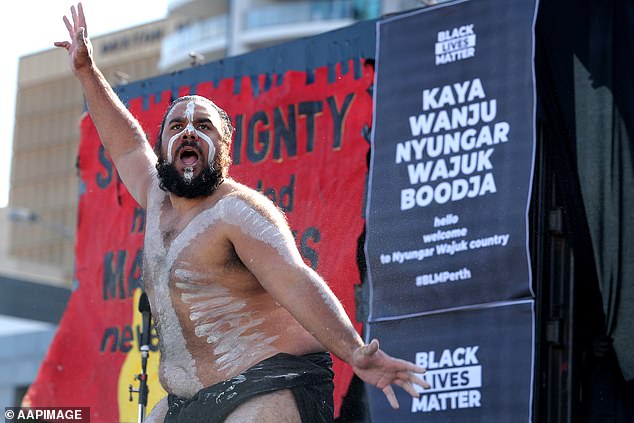 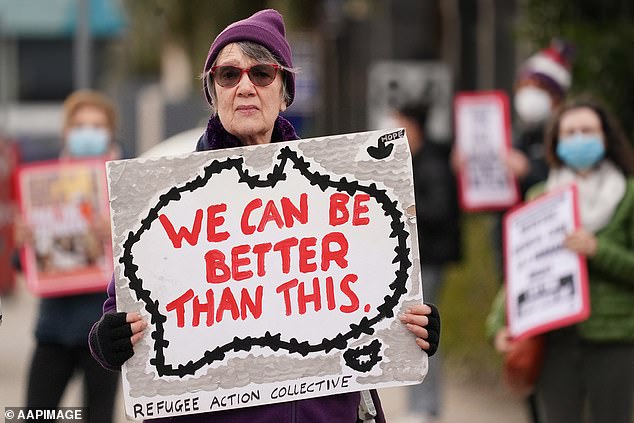 Protesters participate in a ‘Free The Refugees’ rally at the Mantra Hotel in Melbourne, Saturday, June 13, 2020. Refugee advocates are spreading themselves across Melbourne to avoid hefty fines as they protest the indefinite detention of asylum seekers

Anti-racism protests were triggered around the world following the death late last month of African American George Floyd after a Minneapolis police officer was filmed kneeling on the handcuffed Floyd’s neck for nearly nine minutes.

A Black Lives Matter protestor in Melbourne had tested positive for the new coronavirus, which causes COVID-19, this week, while Prime Minister Scott Morrison has warned the mass gatherings were putting at risk the nation’s recovery.

WA Health Minister Roger Cook this week advised large gatherings were not advisable, although his wife, an indigenous woman, said she would join the rally.

Cook said in a statement his wife was a private citizen and made her own personal choices. ‘That’s one of the many reasons why I love her,’ he said. ‘I have great sympathy for the cause of ensuring Aboriginal people and minorities are protected from racism.’ 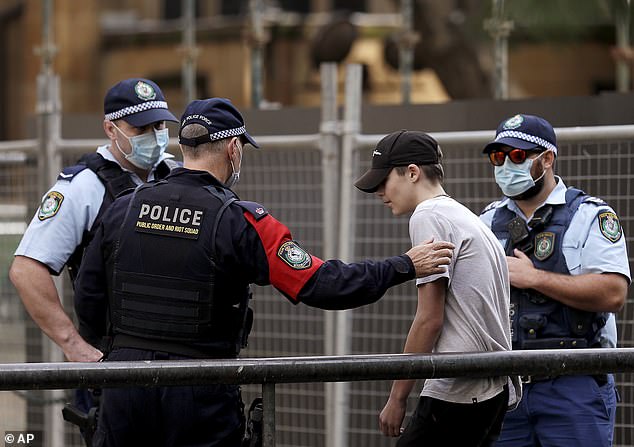 Police take away a man as protesters gather in Sydney, Saturday, June 13, 2020, during a day of demonstrations across Australia in support of the Black Lives Matter movement and refugee rights