Sam Mangera (pictured with his partner Katie), from Blackburn, Lancashire, claims two men tried to dupe him out of £1,100

A father-of-two has issued a warning to private car sellers after two buyers apparently tried to swindle him out of £1,100.

Sam Mangera, from Blackburn, Lancashire, said the duo, who appeared to be Eastern European, took his 11-year-old BMW for a test drive last Friday after contacting him about his vehicle.

However, during the test drive, smoke began billowing out of the exhaust pipe.

After arriving back at his house, the pair tried to knock £1,100 off the £2,500 asking price for the BMW 320 diesel on account of the smoke, despite Mr Mangera claiming there was no known damage to the car.

The 27-year-old then checked his CCTV footage as he was suspicious of their actions and saw what he claims to be one of the men spraying oil up the exhaust.

Mr Mangera said he sent the two away after seeing the footage.

Speaking afterwards, he said: ‘I was at my dad’s and my partner rang to tell me that there were people looking at the car to buy it so I told her I’d make my way home to speak to them.

‘After I got there they had gone back to sit in their car. 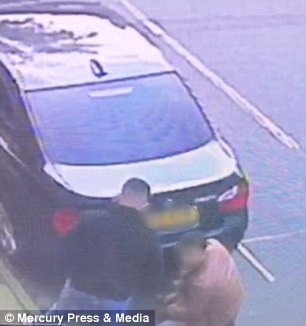 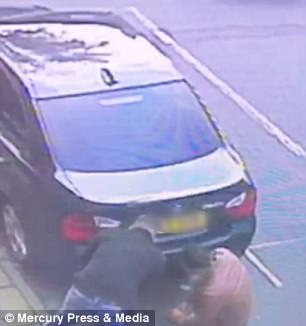 ‘When they did this I presumed they weren’t interested anymore but they came back over and asked if they could take it for a test drive.

‘I wasn’t too keen as I was scared they might damage the car or drive around stupidly in it.

‘I agreed but I went with them, they gave me their names but I don’t think they were their real ones.

‘During the test drive one of the men kept saying to me that something was wrong with the turbo feature but to me nothing felt like it was wrong. But he just kept mentioning the turbo the whole way.

‘I told them that I would drive it home and swapped seats with them. I just didn’t understand where the smoke was coming from at first.

‘When we got home one of the men pointed out a patch of oil on the floor but I said if it had come from the car it would have been leaking from the front not the back.’

Mr Mangera said he decided to check CCTV footage after a similar incident happened to him previously.

He later reported the incident to the police and tried to remove the oil by driving until it had burnt out. 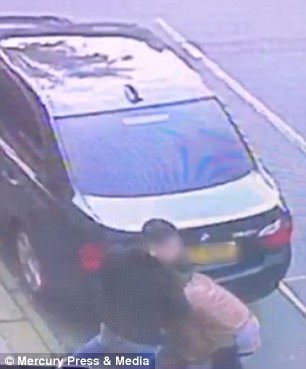 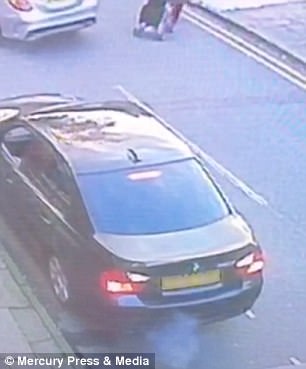 During the test drive, smoke began pouring out of the car’s exhaust pipe (right) and the men tried to get money off 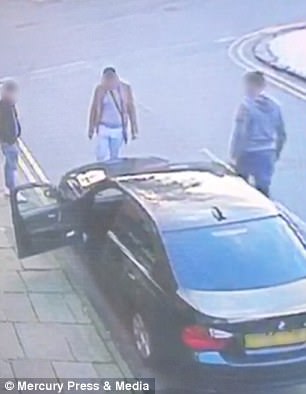 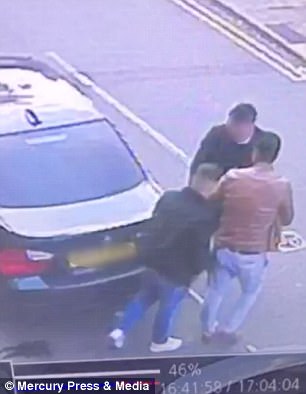 Mr Mangera said: ‘They do it because it causes no long-term damage, it just takes a while for the oil to go and then they have bought a great car for a cheap price.

‘It was just regular black oil that they had squirted up the exhaust. I had to give it a good drive to get rid of the oil.

‘It was dangerous to drive though because of the smoke so I had to try to go when there would be less people around.

‘If I didn’t know what I was doing with cars I would have just let them take it for less money.

‘I reported it to the police online, I just want to make people more aware of what could happen when you are trying to sell your car.

‘I’m glad I knew what I was doing, if someone didn’t they could lose a lot of money.’

Lancashire Police confirmed the incident had been reported.