A special effects makeup artist slammed for sharing an image of herself in blackface on Instagram using the hashtags #slave and #sadmakeup has hit back at accusations of racism.

Percem Akin, from Istanbul, Turkey, posted a picture of herself on Instagram wearing dark foundation and face paint, and a traditional African headscarf.

She added the caption: ‘Color and pain [sic]. My lovely black beauty transformation make up.’

The makeup artist included dozens of hashtags – including #slave – many of which she has since removed following a flood of complaints from shocked followers.

Percem has now told Femail the transformation was for a movie shot in Turkey, and that she had hashtagged its title ‘#slayer’, but that it had been changed to #slave. 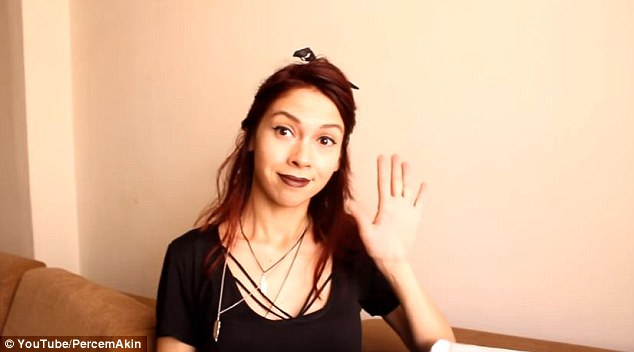 When one critic shared Percem’s photograph on Twitter it went viral, with one shocked user posting: ‘I don’t even have words for this.’

Another wrote on Twitter:  ‘How do people still think this is OK?? For f***’s sake.’

Percem is an SFX artist and had originally posted a YouTube video demonstrating her tutorial. She then shared stills from the video on her Instagram feed, which has more than 3,300 followers.

Percem has 20,000 views on her YouTube account and says she was the NYX Face Awards winner for Turkey in 2017.

Her YouTube page is filled with makeup tutorials, including guides to horror makeup for Halloween, but it was the so-called ‘slave’ post that grabbed the internet’s attention – including that of the Twitter user who shared it and called on their followers to report Percem’s post to moderators. 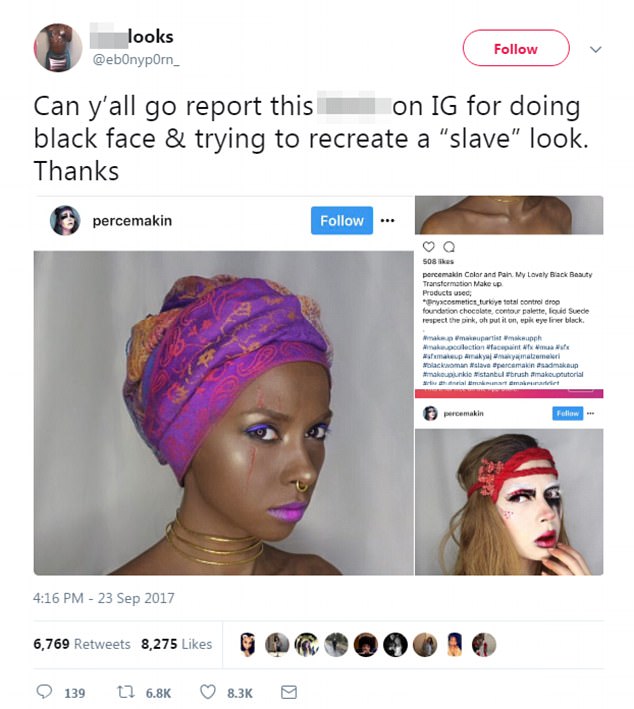 They posted: ‘Can y’all go report this b**** on IG for doing black face & trying to recreate a ”slave” look? Thanks.’

One follower replied: ‘She’s talented… but why do this?? Maybe she is uneducated… I don’t f***ing know. Awful.’ 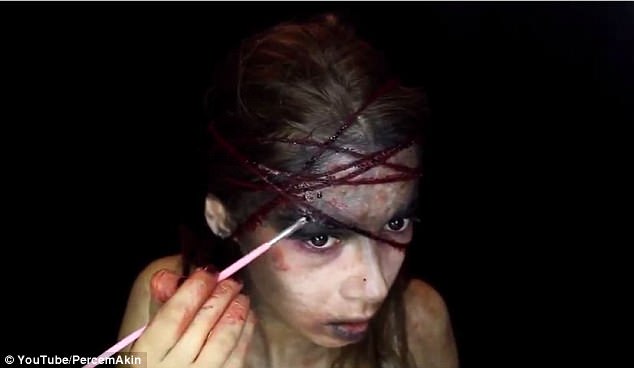 Percem’s day job is an SFX artist, and she often creates Halloween looks on her YouTube page

‘Y’all can’t get a black model to create looks?? Wtf is wrong with people thinking they can paint themselves into another race??’ another said.

‘When will these people learn that we’re not f***ing costume?’ said a third critic.

But Percem hit back at suggestions her post was racist.

She told Femail: ‘This is just a movie character, and the movie [was] directed by some poor students in my country, Turkey.

‘We are not living in America or Africa, in my country finding any black model is so difficult, and they [directors] created a character.

She said she had used the hashtag #slayer, the title of the movie, not #slave, but that it had been changed.

‘People choose to believe this ugly game,’ she said.

Percem added that she was ‘sorry’ if she had hurt anyone with her post, adding ‘I never mean… this as racist work.

‘People prefer to see only racism on my work instead of pure beauty.’