Blackpool cyclist goads cab driver to run him over

A crazed cyclist threw himself onto the bonnet of a moving taxi before goading the driver to ‘run him over’ during a furious road rage row.

The man sprinted after the cab before hurling himself over the car and ripping off a windscreen wiper during the bizarre outburst in Blackpool, Lancashire.

The drama erupted after the cyclist crashed onto the floor while trying to film traffic as he slowly cycled alongside the taxi.

As his aggressor attacks, the driver can be heard telling his passenger: ‘He’s an idiot, flipping hell fire. He’s off his nut.’

A short clip shows the drama unfolding after the cyclist loses his balance.

He topples onto the floor before picking himself up and hurling abuse at the driver, during an explosive tirade.

The motorist can be heard reassuring his startled passenger before driving away from the man.

But the pair are confronted a second time after the cyclist tears through a side street and flings his bike to the ground.

The says: ‘He’s come off his bike I think. He’s in front somewhere, I don’t know what’s going on – he’s having a go at the dustman now.’

The cyclist is then seen arguing with a bin lorry driver before focusing back on the cabbie.

During the clip, he can be heard shouting: ‘Come on, where you going?

‘Where are you going? You’re running me over mate.’ 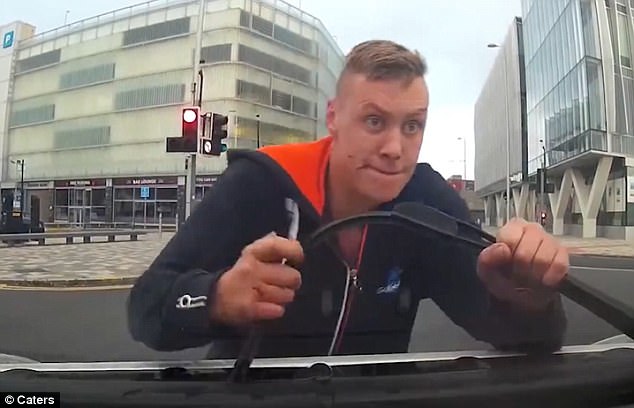 ‘Come on, what are you doing?’

While this unfolds the taxi driver can be heard consoling his passenger saying: ‘Don’t worry, don’t worry.

The female passenger can be heard saying she’s sorry that his car has been damaged, but the driver replies: ‘Don’t worry about that, I’ve still got one good one [windscreen wiper].’

The driver then heads towards Blackpool North station but is tracked down by the cyclist again. 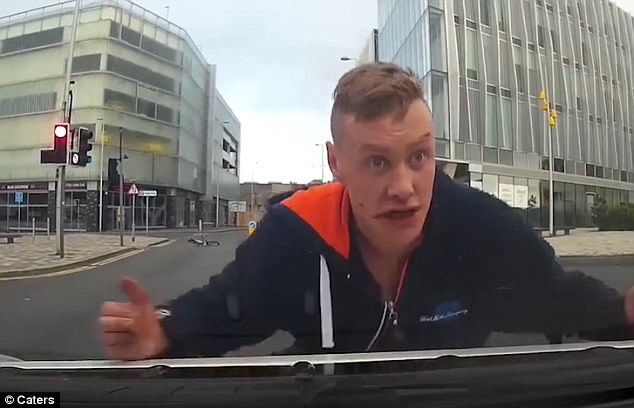 He says: ‘Now which way is he going? Now he’s come off that way.

‘The guy’s crazy, the police need to be called.’

He finally gets away after reversing and driving down a different road.

Managing director of Premier Taxis John Cutler said: ‘The footage is unbelievable, it’s so shocking, I can only praise our driver for his cool reactions and keeping the passenger calm.’

Lancashire Police confirmed the incident was reported to them.

A Lancashire Police spokesman said: ‘We were called around 7.35am on Monday (August 28) to reports a vehicle had been damaged on Cookson Street, Blackpool.

‘The incident is thought to have occurred around 10 minutes earlier, when a man approached the vehicle and pulled one of its windscreen wipers off.

‘Our inquiries are ongoing and no arrests have been made as yet.’