The Palestinian prime minister was targeted in an explosion during a visit to the Gaza Strip on Tuesday, sparking fears of an assassination attempt.

Rami Hamdallah’s convoy had just entered  the territory run by Islamist movement Hamas when the explosion took place, a security source in the convoy said.

Seven people suffered light injuries, however President Hamdallah was not among them.

Under attack: Palestinian Prime Minister Rami Hamdallah is seen upon arrival in Gaza City, shortly after the convoy was attacked

Palestinian intelligence chief Majid Faraj was part of the convoy but was not hurt either, the security source said.

Three of the vehicles in Hamdallah’s convoy were damaged, their windows blown out. One had signs of blood on the door.

There was no immediate claim of responsibility. Radical Islamists opposed to Hamas also operate within the Gaza Strip and have regularly been behind unrest there. 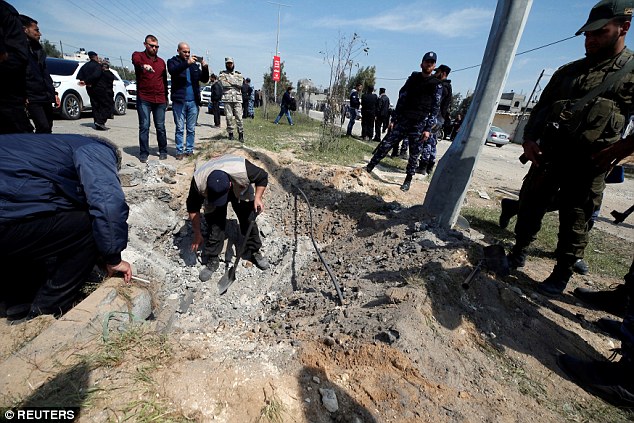 Bomb: Palestinians inspect the site of an explosion that targeted a convoy that was carrying Palestinian Prime Minister Rami Hamdallah, in the northern Gaza Strip 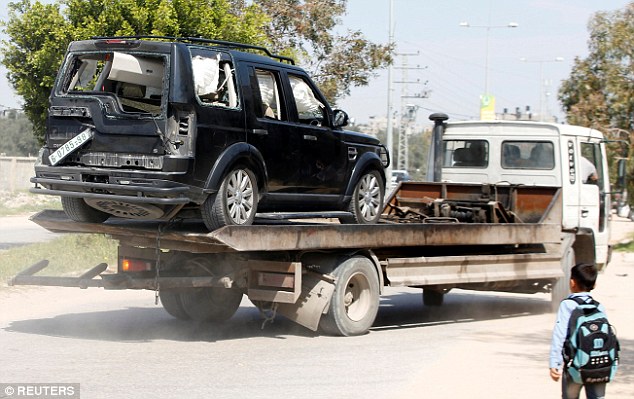 The Hamas interior ministry confirmed there had been an explosion and said security forces were investigating the incident.

It said it would not derail Hamdallah’s visit, which comes as reconciliation agreement between Hamas and Abbas’s Fatah party falters.

The two major Palestinian factions signed a reconciliation agreement in October that was supposed to see the Islamists hand over power, but it has all but collapsed.

Hamdallah appeared on television shortly after the explosion as he opened a plant in the territory.