The Bledisloe Cup will remain in New Zealand for at least another year after the All Blacks demolished the Australian Wallabies in a 36-0 whitewash.

The Wallabies had gone went into Saturday night’s rugby union Test in Auckland quietly confident of winning back the Bledisloe Cup for the first time in 17 years after their record-breaking upset win against the world champions in Perth last week.

But the All Blacks hit back in stunning fashion with a five try to nil thumping to ensure the Trans-Tasman trophy remained theirs after leading 17-0 at half-time.

New Zealand Prime Minister Jacinda Ardern was there to share to spoils as she presented the cup to the All Blacks and visited the jubilant dressing afterwards, where celebrations continued.

The disappointing result means that Australia’s 33 year hoodoo at Eden Park continues, having not won at the venue since 1986.

Australia were held scoreless for just the second time in any Test since 1973.

‘Obviously it’s not ideal in the context of the Bledisloe, so many Australians behind us,’ Cheika told Fox Sports.

‘They were pumped for it and we feel really disappointed that we let a lot of people down.’ 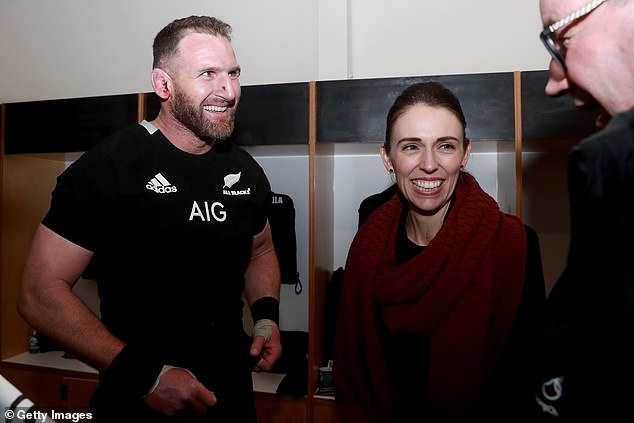 ‘That was utterly embarrassing,’ one woman posted.

Other fans wanted to forget about another dark night for Australian rugby.

‘Why would any Wallabies supporter want to remember this day? Should delete from history,’ one posted.

Another wrote: ‘I’d rather just forget about it and move on. Can’t we just play them with 14 players again.’ 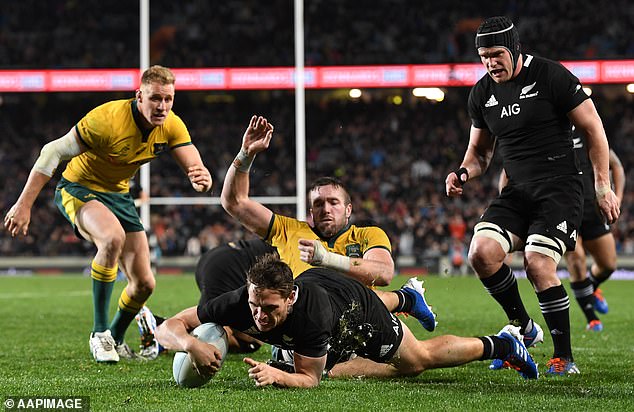 The Wallabies will now to go back to drawing board with the World Cup in Japan just weeks away.

‘I think we’ve improved from 2018, without a doubt,’ an optimistic Cheika told Fox Sports.

‘Even though we got knocked down tonight, we’ll keep improving and keep building from there and get into the knockout tournament, that being the World Cup, and just take it a game at a time.’

In wet conditions, New Zealand’s physicality went to a new level, scoring five tries and providing evidence they aren’t the declining force some had suggested.

Five changes were made to the All Blacks side following last week’s shock loss, which included the addition of Sonny Bill Williams. 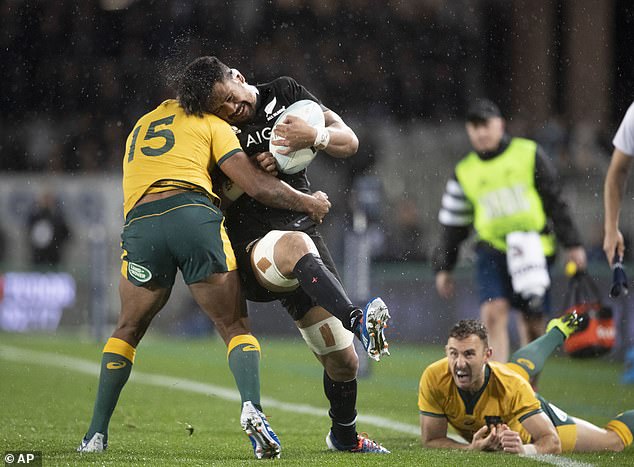 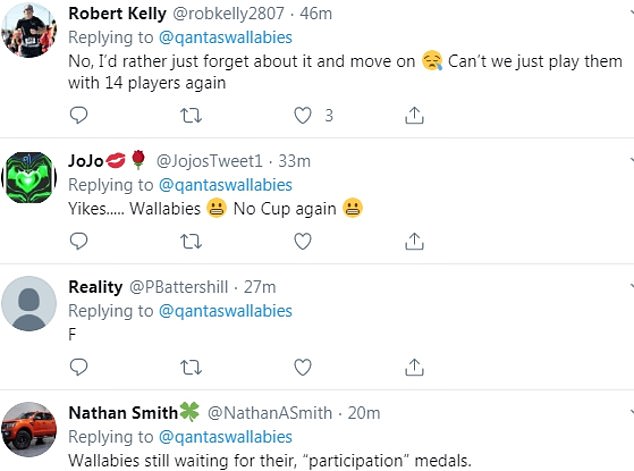 Steve Hansen, in charge of the All Blacks for the 100th time, was on his feet more than once in the coaching box, betraying the pressure he was under this week.

New Zealand dominated the collisions, like Australia had done a week earlier.

It gave halfback Aaron Smith the sort of platform to control the game opposite Nic White had enjoyed in Perth.

An early New Zealand penalty goal to Richie Mo’unga was followed by Australia’s best period, camping on attack much of the opening half hour. 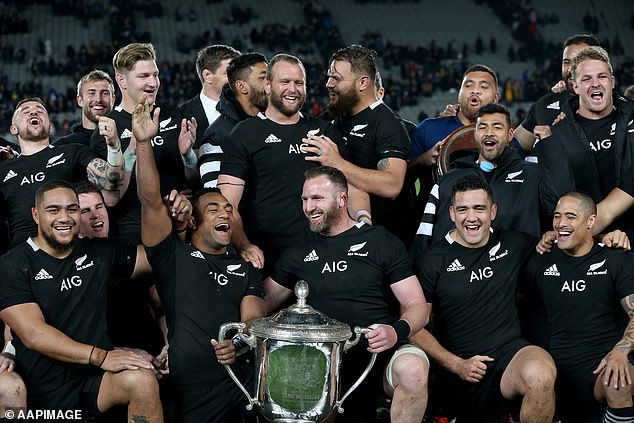 The All Blacks have retained the Bledisloe Cup, which has been theirs since 2003

All they had to show was two penalty shots from five-eighth Christian Lealiifano, which were both missed.

On a night not suited to expansive rugby, the Wallabies chanced their arm and paid the price when Reece Hodge’s spill was pounced on by a speedy Mo’unga, who raced 60m untouched.

The knife was twisted soon afterwards when Smith backed up a 70m Kiwi counter-attack to push his team to a 17-0 halftime lead.

New Zealand’s discipline was a problem at Perth and reappeared just before the break when hooker Dane Coles was shown a yellow card for a dangerous judo-style flip to clean out White. 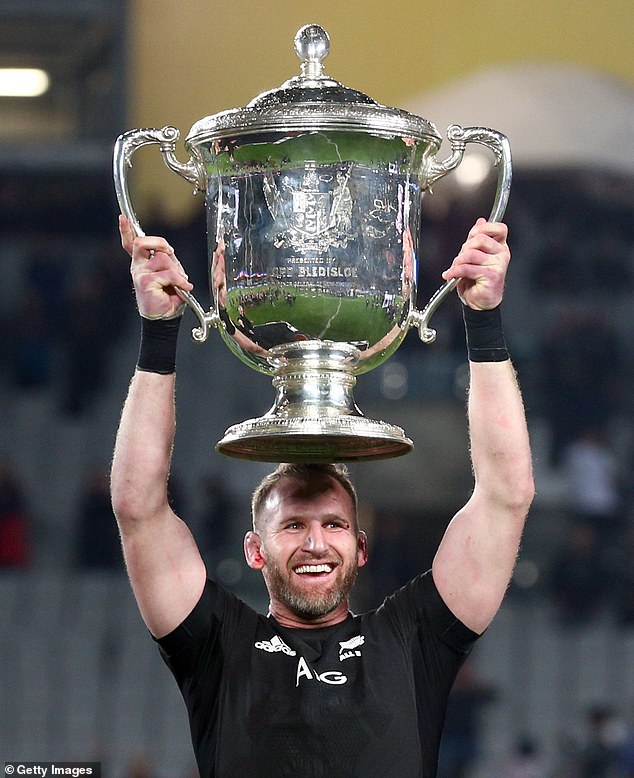 However, the match was summed up by two subsequent scrums when a seven-man All Blacks pack sent the Wallabies skidding.

Sonny Bill Williams’ muscular on return at inside centre was rewarded with a try when he burst onto Smith’s short pass.

The last two New Zealand tries went to young wingers Sevu Reece and George Bridge, who were both surprise selections ahead of accomplished pair Ben Smith and Rieko Ioane.

Former All Blacks halfback Bruce Deans, the brother of former Wallabies coach Robbie Deans was remembered prior to kick-off after he lost his battle with cancer on Friday aged 58. 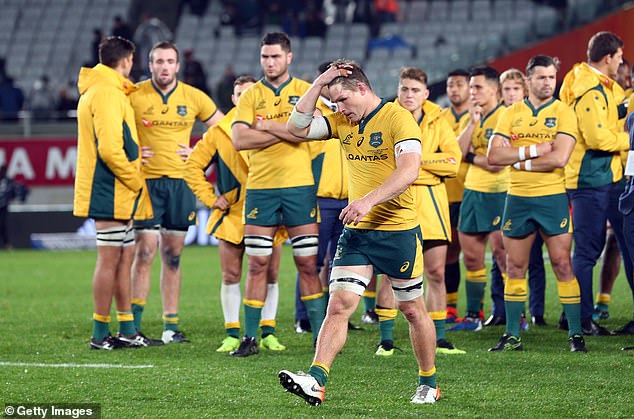