BLM protester punched in face by a pro-police demonstrator

A Back the Blue protester was caught on camera punching a woman in the face as she formed a barrier around his mother during a pro-cop rally in Brooklyn on Sunday.

Video footage shows a crowd of people surrounding an older woman who is against a fence in the Bay Ridge neighborhood but it is unclear who they are separating her from.

Then the man reaches over several heads to hit one of those people with a closed fist before she collapses to the ground but her fall is broken by two women who catch her.

After the woman was attacked, the assailant seemingly waits around to see if there will be any retaliation. 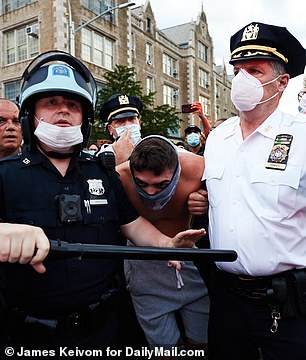 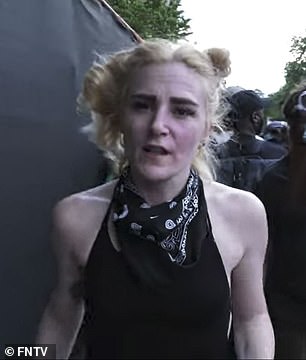 The pro-police demonstrator is seen being taken away from an angry group after he punched the woman in the face. he is not in handcuffs. ‘I got rocked in the face by a white supremacist … trying to protect his mom,’ she said

Then several people are seen chasing the assailant and one rips off his white tank top as they try to detain him but he momentarily gets away.

‘He hit a woman,’ people are heard yelling as commotion breaks out near where the main protest started in South Brooklyn.

Before she was assaulted, the victim was seen telling the older woman to remain in place amid the chaos, which started after a group of people from a Black Lives Matter counter-protest broke off to follow a group from the main Blue Lives Matter demonstration that afternoon.

The pro-police movement was created in December 2014 to directly counter the July 2013 birth of the Black Lives Matter movement which was sparked by George Zimmerman killing unarmed black child Trayvon Martin in Florida the year before.

‘I got rocked in the face by a white supremacist … trying to protect his mom,’ the victim is heard saying after the attack.

The same woman was seen in a separate video walking around yelling: ‘I want to know who has a weak-a** punch.’ 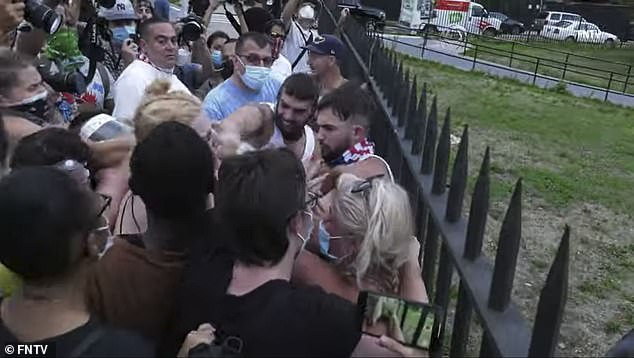 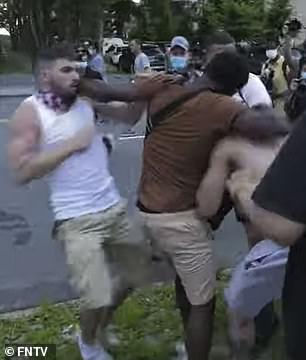 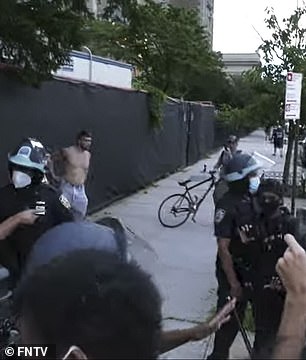 The attacker’s friend is then seen hitting people trying to defend the victim (left). The attacker is later seen after fleeing and having his white tank top ripped off (right) 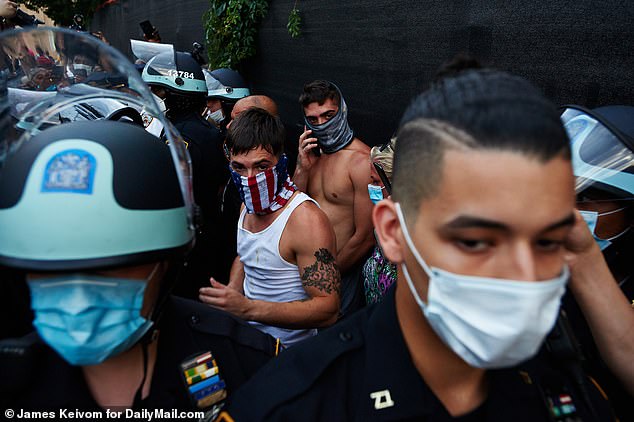 In another clip she is seemingly apologizing for hitting someone. ‘It wasn’t me,’ the person off-camera is heard telling her as she apologizes repeatedly.

Cops caught up with the violent man, who was later seen standing beside his mother. Police took him to a police van although he was not wearing handcuffs.

Frustrated counter-protesters who had urged cops to arrest him reportedly blocked the police van prompting law enforcement to clear them out of the way.

As part of the two days of protesting, flags had been burned by some counter-protesters and locals holding alcoholic beverages were on the scene questioning Black Lives Matter protesters.

A Black Lives Matter protester was also tasered earlier in the counter-demonstration and appeared to be cuffed by NYPD.

The New York Police Department, which has been harshly criticized after several officers were seen using excessive force against protesters in the days and weeks following George Floyd’s death, had its budget slashed by $1billion.

The city council’s decision has prompted warnings from pro-law enforcement circles that slimmer budgets for police will lead to less officers on the street and a rise in violent crime.

Since then they have been reporting increased violent crime rates. 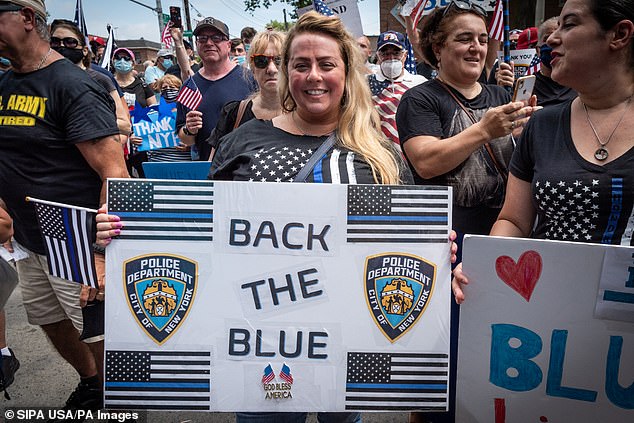 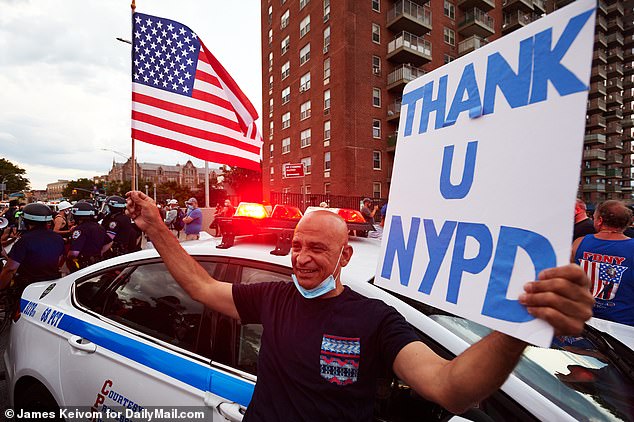