Blood brokers have been accused of profiteering from covid-19 by charging thousands of dollars for a milliliter of blood from recovered patients.

Plasma donated to hospitals and nonprofit blood banks like the American Red Cross is generally reserved for use as an experimental treatment for patients with severe covid-19.

That means that the private diagnostics industry turns to blood brokers to source the plasma, which they are using to create reliable antibody tests – and some brokers are charging $1,000 for a one-milliliter sample.

The U.S. has more cases of covid-19 and more deaths than any other country in the world

Some run donation centers where they pay donors for plasma, while others purchase ‘remnant blood’ – the leftovers from blood tests run in laboratories that would otherwise be destroyed.

Brokers usually charge anywhere between a few dollars a milliliter to a few hundred dollars, the Wall Street Journal reported.

The price depends on the difficulty of obtaining the sample, meaning that plasma from patients with rare tropical diseases is much more expensive than plasma from common conditions such as hepatitis.

Now laboratories are complaining that brokers are cashing in, at a time of global turmoil. 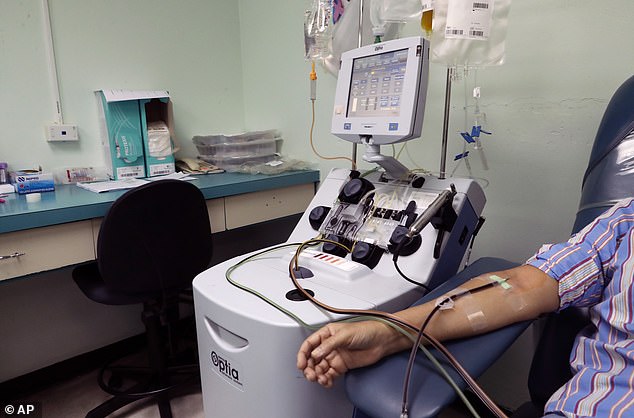 A recovering covid-19 patient gives blood in Panama City on May 13. Blood is used to help develop antibody tests, which may hold the key to getting people back to their normal lives 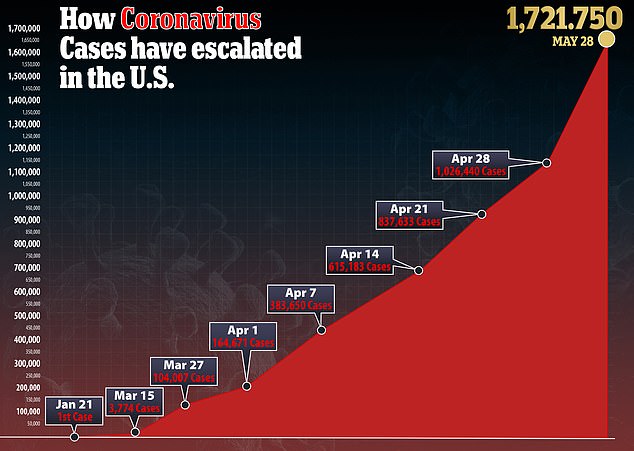 The U.S. has 1.7 million confirmed cases – the highest number in the world. With over 100,000 deaths it also has the highest total number of deaths, with Britain second with 38,000

She told the paper: ‘I feel people are taking extreme advantage of the situation because they can, because there’s crazy demand.’

She said one broker quoted $1,000 for a one-milliliter sample of convalescent plasma.

The only way to determine the accuracy of a test is to run it against samples known to contain antibodies to covid-19, and then against ones known to lack them.

No one is yet certain whether you can be infected with covid-19 twice, but the CDC currently states that, if you have antibodies in your system, ‘evidence suggests that infectiousness likely is greatly decreased and that some degree of immunity from future infection has developed.’ 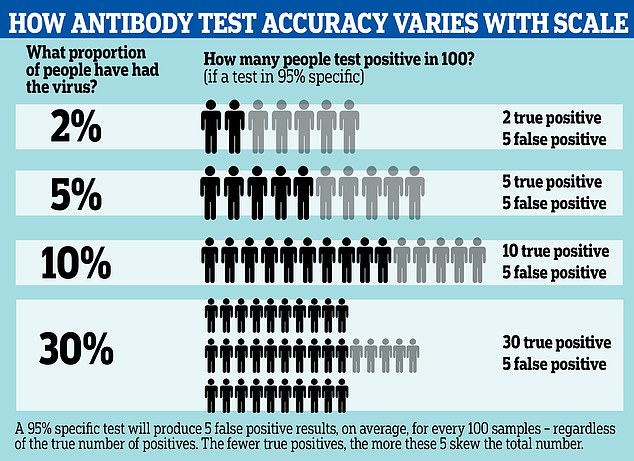 Antibody tests for COVID-19 may be wrong up to half of the time, according to updated information from the Centers for Disease Control. A graphic reveals how the test can spot fewer than half of true positive cases, depending on how widespread the infection is

With a vaccine still considered a long way away, the more people who have antibodies in their system, confirmed via a reliable test, the more likely it is that a country can get back to work.

HOW CAN ACCURATE TESTS BE INACCURATE?

Antibody tests with what could be considered a high level of accuracy can still produce large margins of error if only a small proportion of a population has been infected.

A 95% specific test, for example, will always produce five false positive results from a group of 100 people.

Even if it is sensitive enough to detect all the people who have genuinely had the disease, it will still return five false positives, and the effect this has on the results of a survey can be large if the number of true positives is low.

If the prevalence of antibodies is low – for example, only 5% of people in the group have had the illness – the results could end up half wrong. The 95% test, in that situation, would be expected to return 10 positives – five of them right, five of them wrong.

This means the functional accuracy of the test, known as its true predictive value, is only around 50%.

For example, if 30% of the population have been infected, those five false positive results would be counter-balanced by 30 true positives, making the test more like 85 per cent accurate.

A more specific test can reduce this effect; by comparison a 99.9% specific test would return one wrong result per thousand – 100 per million.

When the pandemic broke out scores of unreliable antibody tests flooded the market, leading the Food and Drug Administration (FDA) to insist on more stringent controls.

And developing reliable tests has become more important than ever as those on the market could be wrong up to 50 percent of the time, according to the CDC.

The CDC now warns that the antibody testing is not accurate enough for it to be used for any policy-making decisions, as even with high test specificity, ‘less than half of those testing positive will truly have antibodies’.

The FDA requires diagnostics companies to run their tests against at least 30 positive samples and 75 negative samples to obtain emergency approval for covid-19 antibody tests.

Furthermore, only around a third of donations have high enough concentrations of antibodies to be used as a positive control for antibody tests, the WSJ said.

Andrew Levin, president of Massachusetts-based Kephera Diagnostics, said he was quoted $1,000 for a sample of plasma.

‘There was a land grab going on,’ he said, although he noted prices have fallen to between $100-$300 in recent weeks.

To combat the high prices his company started appealing directly to recovered coronavirus patients for free donations of a few drops of blood taken from a finger prick.

Boca Biolistics, based in Florida, has also seen strong demand for blood samples of covid-19 patients.

‘We’re getting inquiries from around the world, whether in Asia, Europe or here in the U.S.,’ said Valentin A. Adia Jr, chief development officer.

The company is preparing to sell a product comprising 10 samples of convalescent plasma and 10 negative samples, sourced from laboratory remnants, at a price of around $500, he said. 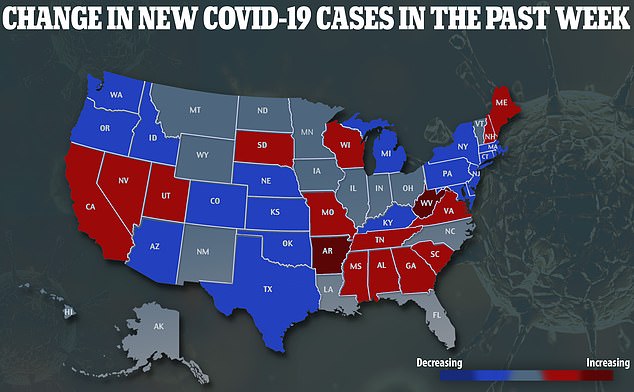