Bloody Christmas weekend as 14 people are shot dead, and 16 others are injured across the US

America’s gun violence problem did not take a break for the Christmas weekend, as at least 14 people across the United States were shot dead and another 16 were injured.

Among the victims was a child under the age of 5, as well as a number of teenagers in cities including Denver, Philadelphia and Chicago.

Colorado experienced the worst violence, with six people dead over the holiday weekend due to gun-related crimes, while in Chicago at least seven people were injured.

And in Minneapolis a 19-year-old was gunned down during an apparent ‘gang brawl’ inside the Mall of America.

A young Kansas City boy was found inside his Missouri home suffering from a gunshot wound on Christmas in what police believe was an accident.

Officers responded to the scene of the boy’s home at around 6.45pm on Christmas Eve in the 7800 block of James A Reed Road, where they found the boy suffering from a gunshot wound in critical condition.

Police on the scene interviewed witnesses inside the home and transported the child to a local hospital, where he died later in the night, the Lawton Constitution reports.

The boy’s death remains under investigation, but authorities believe the shooting was accidental and are not looking for any suspects.

At least six people died in Colorado due to gun-related crimes over the weekend.

In Aurora, officials are investigating two double homicides, both of which occurred on Christmas Eve.

Officers first received a call at around 11am Saturday requesting a welfare check at a home in the 1500 block of Boston Street.

Once on the scene, they found two adults dead from apparent gunshot wounds, the Denver Post reports.

No arrests have been made for the homicide, as investigators are continuing to work to determine the relationship between the two adults.

Later in the afternoon, police were called about another shooting in the 17500 block of East Tennessee Place, where investigators found two men outside with gunshot wounds.

The victims were rushed to a local hospital, where they succumbed to their injuries.

No arrests have been made in that shooting yet, either.

Meanwhile, in Thornton, Colorado, a married couple was found shot to death at a Jehovah’s Witness Kingdom Hall, in what police believe was a murder-suicide.

Officers said it was reported that an adult female was shot and killed by her husband who then turned the gun on himself.

Witnesses claim they saw a suspect throw a Molotov cocktail into the building as emergency services raced to the scene.

Thornton Police confirmed that they responded to reports of a structural fire at Kingdom Hall before finding the bodies of a man and a woman at 9am.

The couple were former members of the congregation. 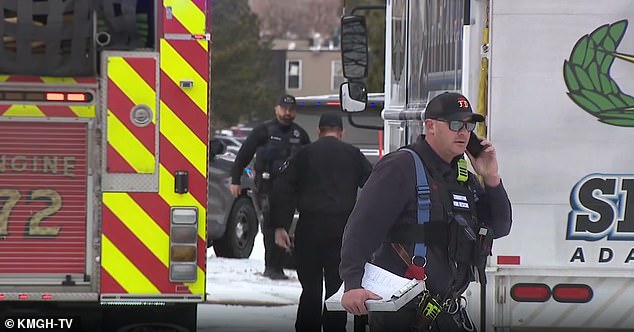 Thornton Fire Department responded to a structural fire at Kingdom Hall but did not find a blaze on arrival, handing the investigation over to cops 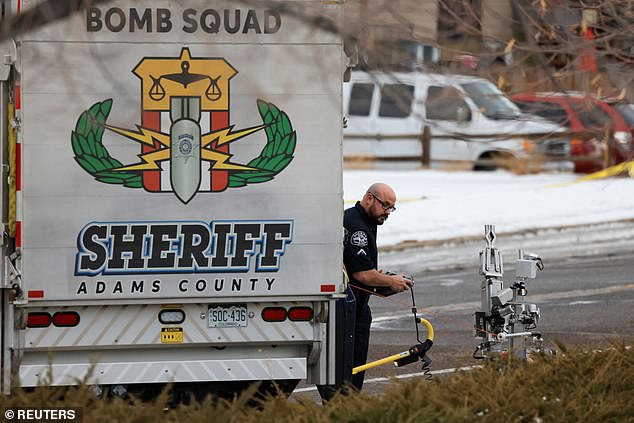 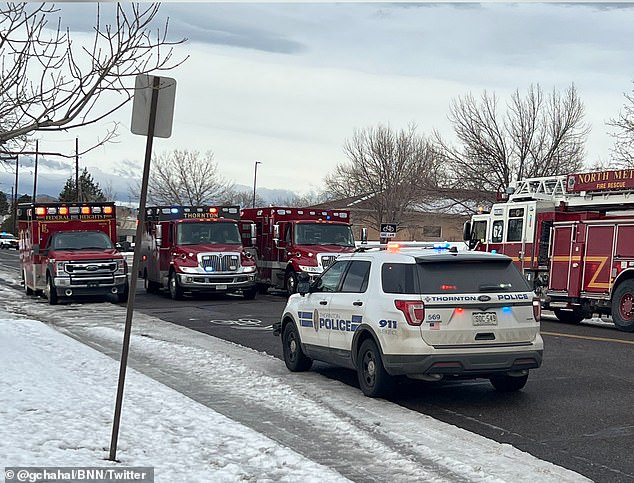 A husband shot and killed his wife before turning the gun on himself at a Jehovah’s witness center in Thornton, Colorado

Police added there are ‘no known threats’ to the community and witnesses are being interviewed.

In a statement, they said: ‘The individuals were married and former members of the Kingdom Hall congregation.

By Sunday night, Thornton police said they found three ‘incendiary devices’ at the scene, but would not elaborate.

Police, however, insisted there are ‘no further concerns for the safety of the Thornton community.’